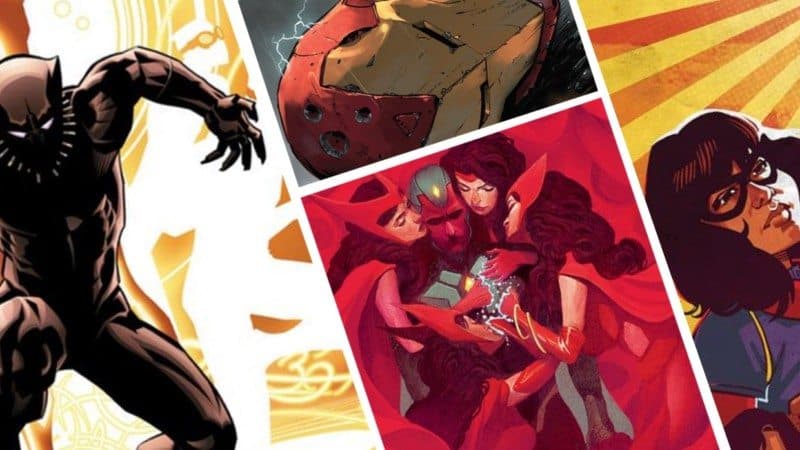 2016 will undoubtedly go down in history as one of the worst years on record. Despite international conflict and countless celebrity deaths, 2016 managed to be a pretty great year for Marvel comics. Creators took books to places they had never been before to explore themes of race, identity, and politics. This was a tough list to curate. There were a lot of titles to choose from, but these five proved to be a cut above the rest. 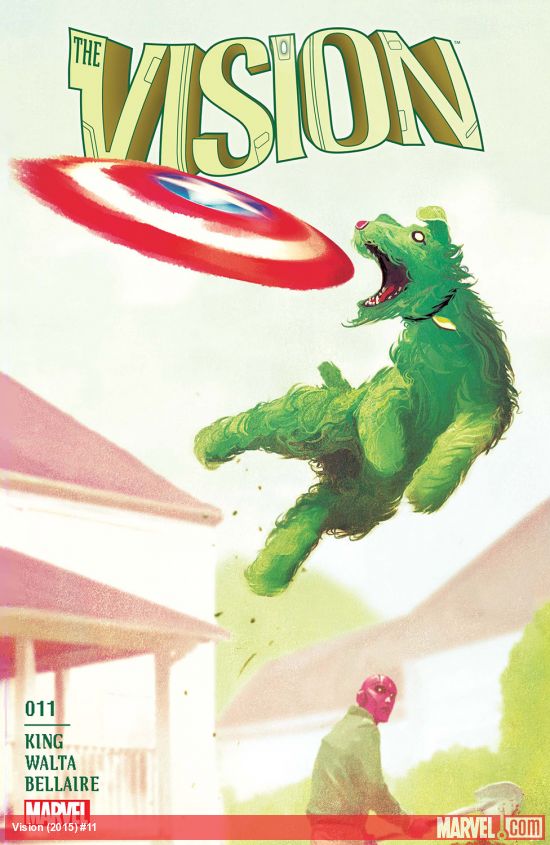 THE VISION by Tom King and Gabriel Hernandez Walta

Mark Bouchard: Marvel’s THE VISION examines its titular character from a perspective readers have never been given, in a setting that superhero comics (Marvel in particular) rarely find themselves: the suburbs. Taking place largely outside of the scope of traditional Marvel comics, King shows readers the tumultuous personal life of one of the Avengers’ least developed characters. King seamlessly incorporates terror and anxiety into his account of the American suburb, complete with fabulous social commentary.

Twelve issues proved to be all King needed to tell a fabulous story, that, despite not breaking any sales records, will stick with fans and haunt shelves for years to come. THE VISION isn’t like the publisher’s other fringe titles. It’s hellish, rather than quirky, and frantic, rather than funny. It turns out that providing the synthezoid with a family, a nine to five, and a house in the suburbs did not normalize him as he had hoped. But rather, has sent his, and perhaps the entire world into chaos.

READ: Check out where this series began in our VISION #1 review! 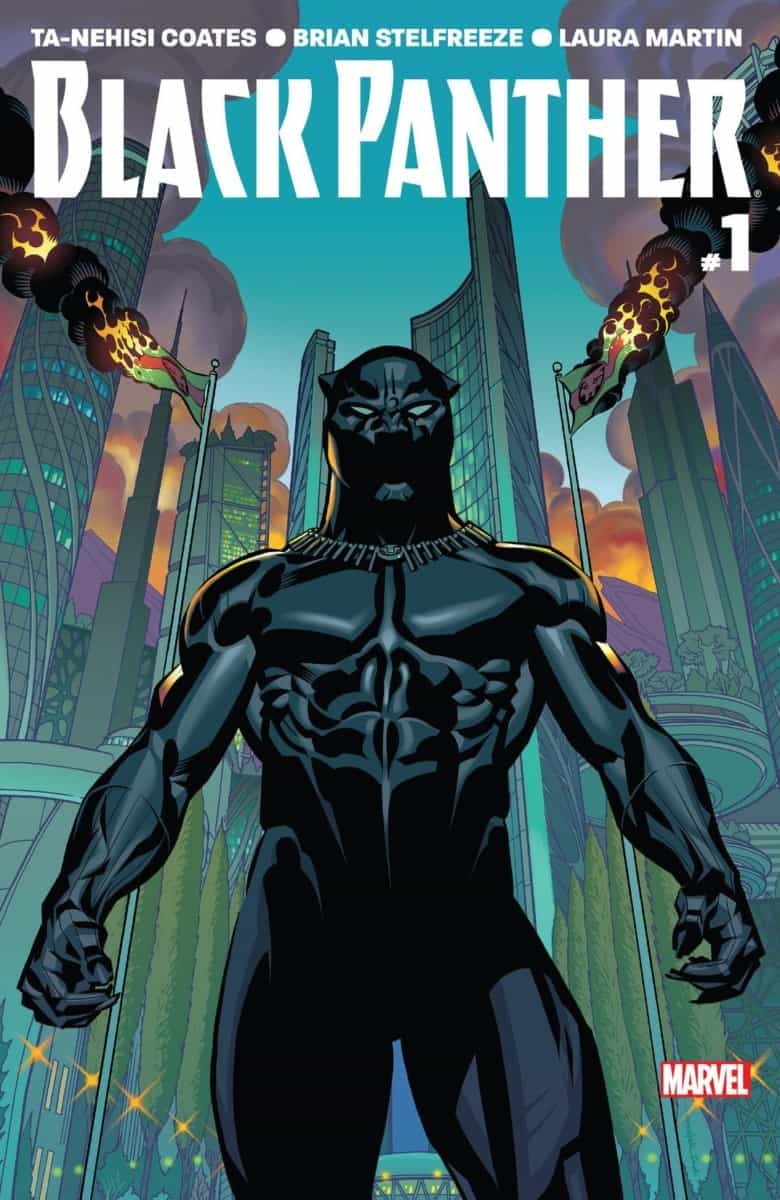 Liam Nolan: It’s not surprising that BLACK PANTHER has been one of Marvel’s biggest books this year. With Ta-Nehisi Coates, one of today’s best contemporary writers in any medium writing the comic, it’s received coverage and acclaim from mainstream publications like THE ATLANTIC, THE NEW YORK TIMES, and VICE.

Coates focuses less on punching and more on politics, and that focus is what makes BLACK PANTHER a pleasure to read. The characters are vibrant, struggling with what they have to do in order to achieve their goals. BLACK PANTHER has heroes, but they’re not unambiguously righteous; they’re struggling with their actions and inactions. The comic feels like an exploration of Machiavellian political theory and the ethics of leadership and rebellion.

It’s also worth mentioning that Brian Stelfreeze and Chris Sprouse have done a great job on the book’s art. I can’t think of a single poorly drawn panel in the entire run so far. Every action scene is clearly drawn and exciting, but their real strength lies in capturing the expressions of the comic’s characters. BLACK PANTHER is a subtle comic, and Stelfreeze and Sprouse do a great job of making it exciting and intriguing. 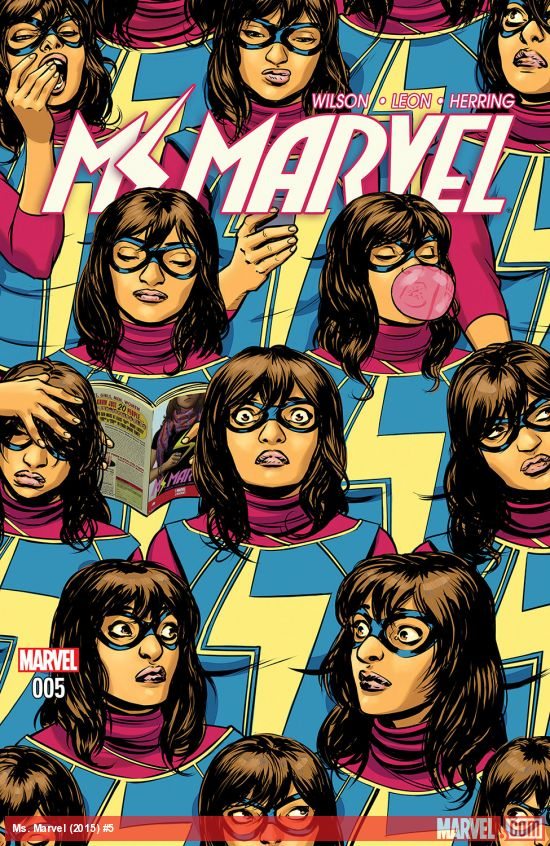 Alex Bisignaro: MS. MARVEL has been one of the most enjoyable and important comics in the past three years. Kamala Khan’s role as the new Ms. Marvel shook many stereotypes and misconceptions of not only Muslim culture, but also feminine geek culture as a whole. She is a confused teenager with a variety of friends and aspirations, and the character dynamics that writer G. Willow Wilson places in her stories have been some of the best in comics, rivaling the likes of ULTIMATE SPIDER-MAN and INVINCIBLE, both of which are also stories focused on teenagers.

But what makes this series so unique compared to these series is its ability to be such a diverse book without being forceful. Jersey City, the setting of MS. MARVEL, hosts a wide assortment of cultures, and that is portrayed well in this series. There is also Adrian Alphona’s art, which captures heavy somber themes while also adding such touches to his art to make it light and fun when the story calls for it.

The renumbering of the MS. MARVEL series that took place at the end of 2015 after SECRET WARS gave an excuse for new readers to jump onto the MS. MARVEL bandwagon. But I am glad to say that the creative team did not place their feet on the pedal in 2016, but rather continued to develop the cast surrounding Kamala to make the book rounder and even more full of life. 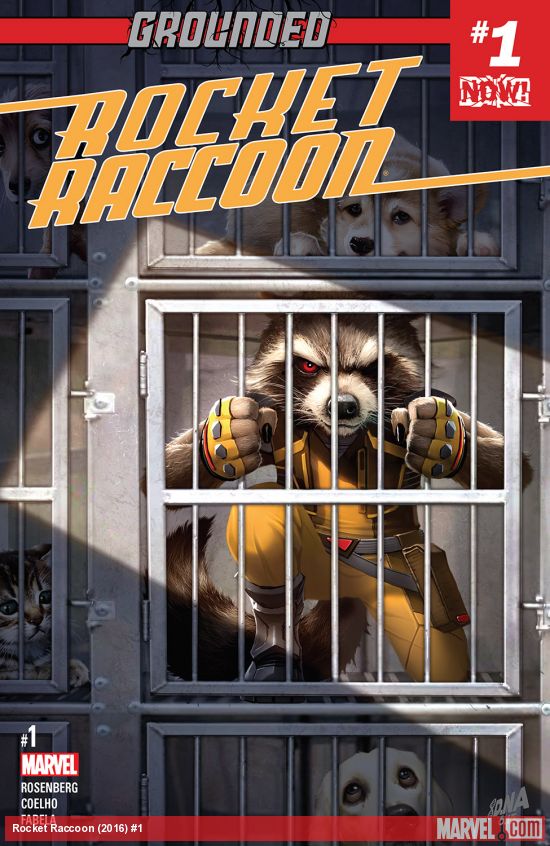 Mark Bouchard: While CIVIL WAR II left the Guardians of the Galaxy without a ship, their status as a team is very much up in the air. As such, everyone’s favorite foul-mouthed, gun-toting space critter has become a solo act, taking the stage at an unlikely venue for a former Guardian of the Galaxy: downtown New York City. Sans Groot, Rocket has no wall to riff off of, allowing writer Matthew Rosenberg (WE CAN NEVER GO HOME, 4 KIDS WALK INTO A BANK, KINGPIN) to pepper Rocket’s pissed-off diatribes against the planet Earth with political undertones against the evils of Earther (read: American) culture. From the hands-off approach to homelessness and hunger to the militarization of American police, nothing is safe from Rocket’s mouth — let alone his trigger-finger. (It is, of course, the fastest in six systems.)

ROCKET RACCOON is fun. That’s how it’s always been, and how it’s supposed to be. It’s the one aspect of the ROCKET RACOON formula to which Rosenberg and co adhere. Artist Jorge Coelho creates a stylized environment fantastic enough to contain Rocket, but realistic enough to house his desperate anywhere-but-here approach to life on Earth. Paired with the palette of colorist Antonio Fabela, which manages to be both vibrant and gritty, ROCKET RACCOON #1 reads like a Saturday morning cartoon with a splash of late-night and a dash of noir. In other words, the perfect aesthetic to complement the new, snarkier, politico-punk Rocket Raccoon we’ve been treated to, courtesy of Rosenberg.

ROCKET RACCOON is dark, political, and violent. Don’t pick it up expecting to find another happy-go-lucky Rocket and Groot jailbreak adventure. It’s certainly not goofy by any means — unless you consider assaulting a police officer with a cheeseburger “goofy,” in which case, yes, it’s very goofy. Many thanks to the creative team for giving us our medicine with sugar. Though we’re only one issue in, ROCKET RACCOON is certainly a title to keep an eye on in the coming year. 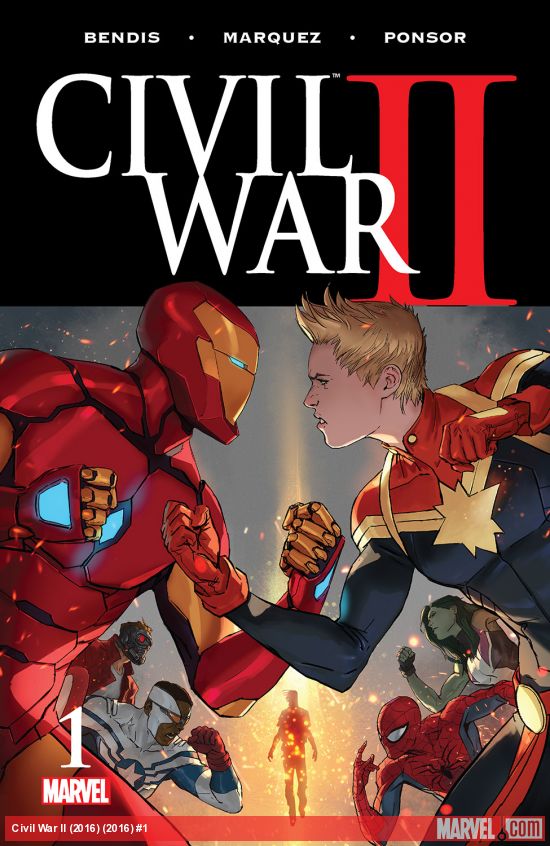 Marius Thienenkamp: Given the many negative responses by fans and horrendous sales for the last few issues, this book might seem like a weird choice. But CIVIL WAR II works surprisingly well in its subtler and more quiet moments. In issue #4, for instance, as Tony Stark monologues about the potential dangers of profiling and the elimination of free will, we see Carol Danvers and her team arresting an innocent woman. Or, in issue #8, as Hank McCoy makes Carol aware of the implications her actions might have for certain racial groups.

READ: Check out our analysis on the opposing sides in CIVIL WAR II!

Superheroes, as a metaphor for contemporary political discussions, are what worked so well with the original. And I would be hard pressed to say CIVIL WAR II didn’t do exactly that. Along with the all-throughout stellar artwork by David Marquez, who nails the emotion-driven dialogues as well as the grandiose hero-on-hero action sequences, the series was more captivating and memorable than any other Marvel Universe events in recent years.