I’m sitting in some coffee store with faux-molded and faux-peeled walls (yes, even the peeling is faux) and a black wall painted like it’s supposed to be a chalkboard—but I know that it’s not a chalkboard, because I’ve been here before and nothing ever changes, and there’s no chalk dust. It’s marker, and it stays just so brunch after brunch, forever.

There was a lot of talk of bubbles over the course of a year that was odd and unfortunate by many standards—a lot of standards; like, most standards; perhaps nearly all standards. And, boy, this coffee store, it’s a bubble, I’m a boy in a bubble, I’m a modern-day bubble boy, almost like all the other boys here, with their leather shoes and iPhones.

From here, things could almost feel just the same as they always were, if I didn’t already think they should feel almost completely different. In my personal life, as for the public, 2016 was a period of great change, though the year will rank much higher on my “Top 28 Years of My Life” list than it will in the power rankings of history.

One constant, though, was comics. I read more comics this year than ever before. Still, on December 31, I feel like I could have read more. I feel like this on a lot of days, but this day elicits the same response most years: I could have done more.

But I didn’t, and here we are. A lot of comics stood out to me this year. These were the new books that meant the most to me in 2016. 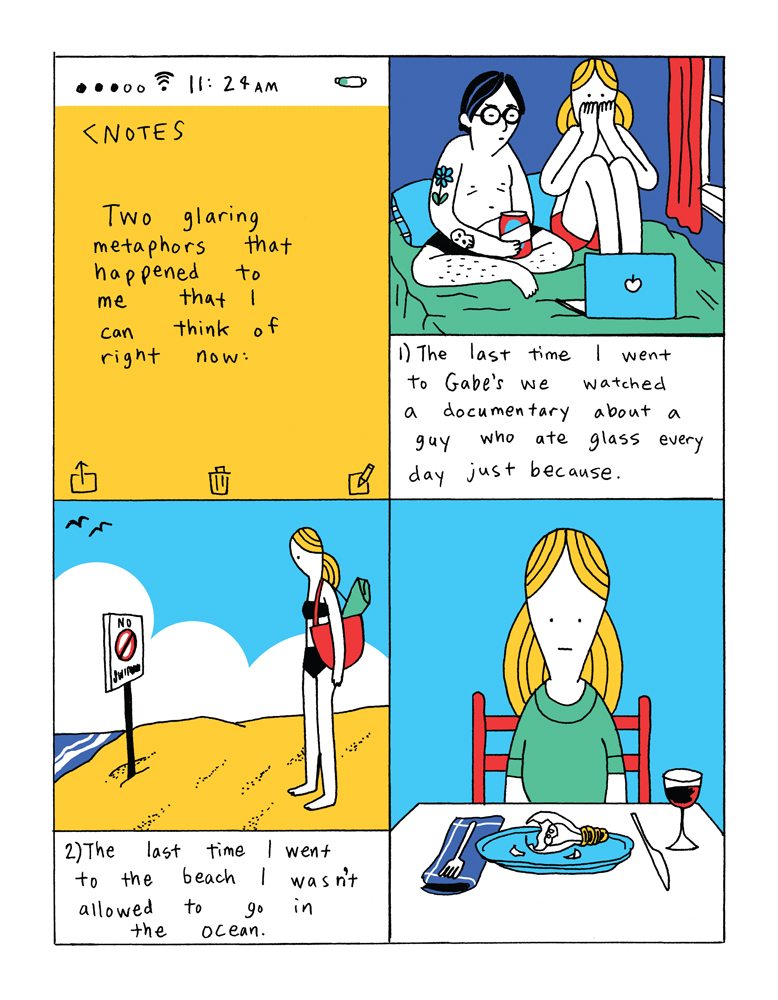 I’ll start with the book that I’ve thought about perhaps more than any other this year. There’s a page in Alabaster Pizzo and Kaeleigh Forsyth’s book on which Forsyth—the book’s text comes from notes she wrote on her phone, which Pizzo rendered into comics—is traveling in Sweden. She has just quit her job, and she has continued to record her dating life with amusing but sad bits and pieces. The first three panels of the page show her site seeing with the same blank stare she has through most of the book. : | would be the appropriate emoticon. The final panel is all text: “I realize much is said of this but it’s insane when u figure out that no one has any idea what’s going on.”

This line, like much of the rest of the book, seems to capture something about the psyche of this generation, though the observation has been equally valid throughout human history. It’s just one moment of a quietly excellent and insightful book about life and depression in this age. HELLBOUND LIFESTYLE is both painful and painfully funny.

Perhaps its appeal is generational, but I don’t recall many books that so perfectly capture the moment’s collective sense of humor. But its depiction of aimlessness and loneliness feels equally affecting and has stuck with me in the months since I read the book. Ultimately, HELLBOUND LIFESTYLE offers what I think is a unique and honest portrait of life (at least for some people) in 2016. 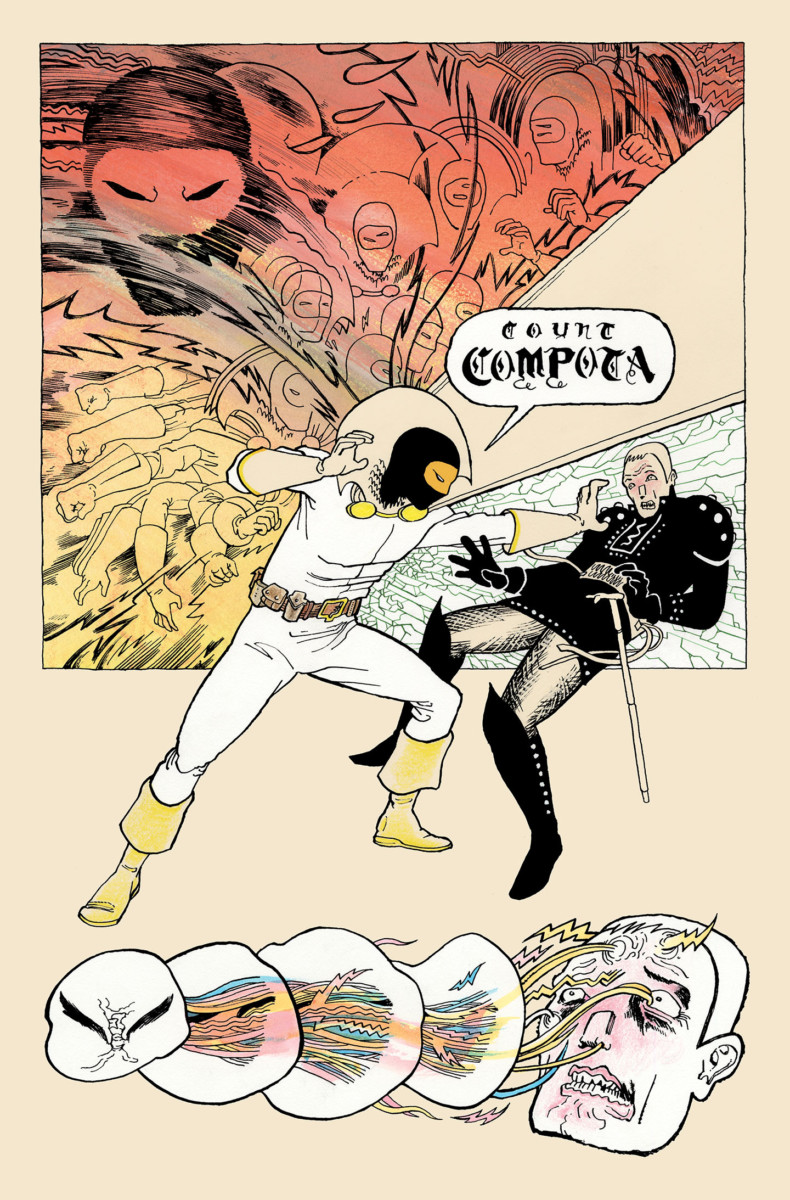 I’m not one for nostalgia. For starters, I have a bad memory for a lot of things, which makes fond recollections difficult. Also, I’ve never yearned for better days gone by. Maybe I’m just not old enough, or maybe that is a lie and I actually do yearn for better days.

There are two times a year that nostalgia washes in like the tide, and I stand for a few minutes looking over it. One: my birthday. This was also my grandfather’s birthday. He died in 2012, the hardest and most significant year of my life. Two: New Year’s Eve. “Best of 20XX” bleeds quickly into “This is Your Life,” and, today, I find myself assessing 2016’s spot on my “Top 28 Years of My Life” list.

COPRA is a book that I will always read and enjoy. I first bought Michel Fiffe’s DEATH ZONE one-shot (the lead-in to COPRA) in 2012, so as I look back on the books I treasured the most, COPRA is unavoidable. I came home late that year after a long time away, and COPRA was waiting for me there. It’s this memory that makes COPRA important to me.

But it’s not just the first issues that I recall with so much fondness. Fiffe does something brilliant with every issue of this series: stunning colors, bold and ambitious penciling, a sprawling and captivating world of characters that you can tell hold an important place in his own life. I’m not much for superheroes, but as much as COPRA harkens back to superhero titles of the ‘80s, it’s in a class of its own when it comes to masks in 2016. 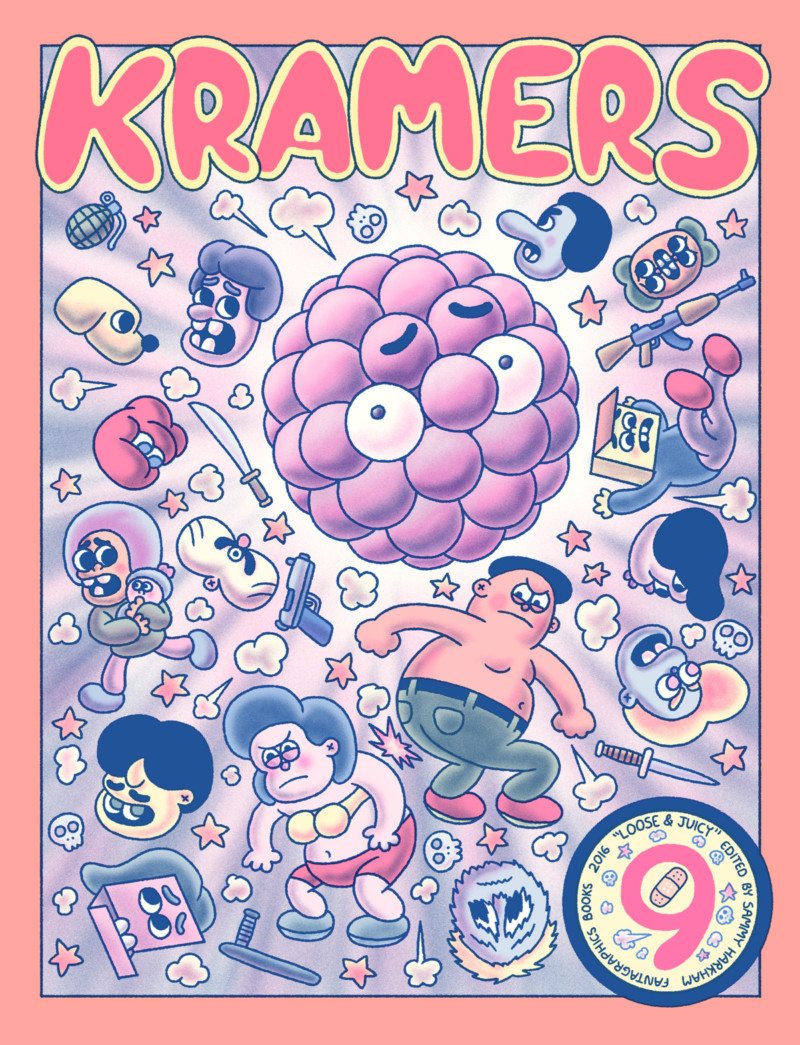 Looking back now, though, I also have a distinct memory of that Sunday morning in May: The news of the Orlando shooting had reached our phones in the late-night hours, and the morning newscasts were all covering it. It gave CAKE a bit of an uneasy feeling; the event is hosted at a prominent community center in Chicago’s Boystown neighborhood. But the day’s news also made CAKE feel like a confirmation of the comics community’s rejection of the hate that, in many ways, defined the year.

For me, KRAMERS ERGOT is the single series that most encapsulates the diversity of this world. Harkham prides himself on placing artists in unexpected combinations and continues to showcase the very best and most interesting work out there. Events like CAKE are comic artists’ and readers’ affirmation of life and love, so, from here, it feels appropriate that I found the year’s best anthology at that festival. 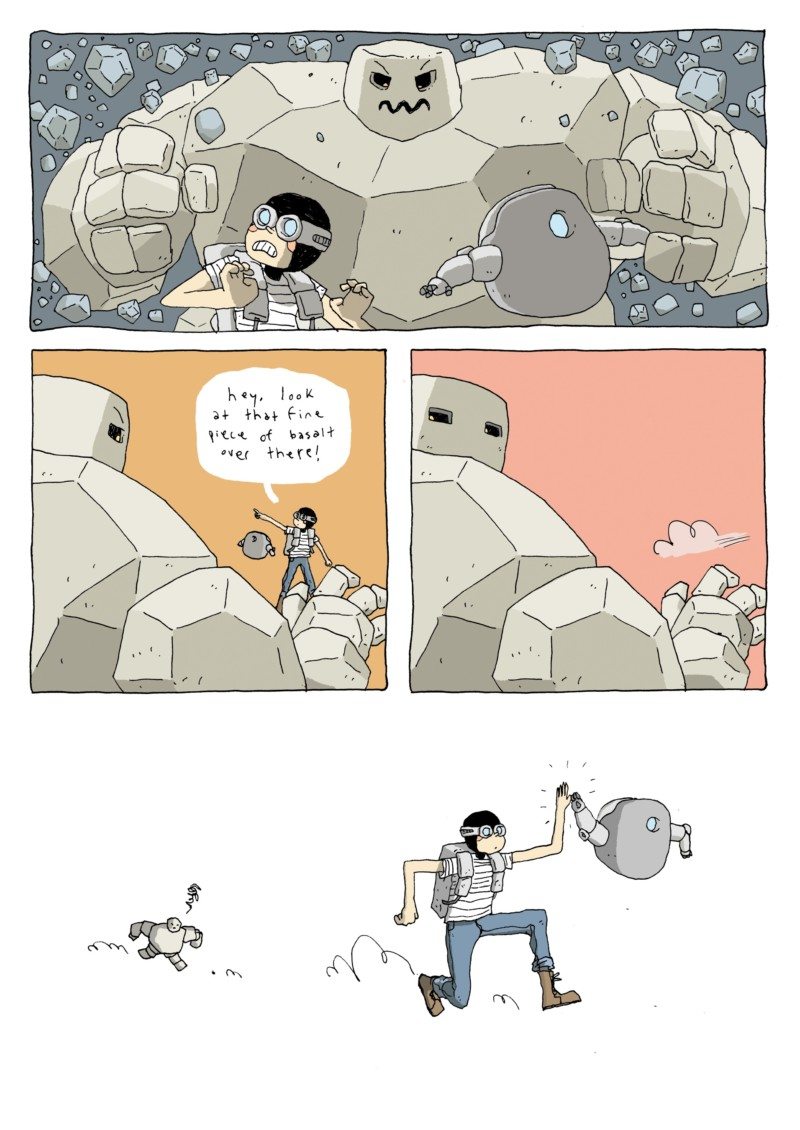 In my year-end look-back, I find it sort of hard to keep in mind that stuff happened before November 9. I work in Washington—of #draintheswamp fame—and I remember so distinctly the fog that set over the city’s collective conscience that morning and just sat there for weeks afterward. I remember wondering when I’d be able to enjoy things again.

In the time since then, I’ve come to believe that a little levity is still okay. In that window, I’ll always make space for books like NIGHT AIR, an absolute treat of a book and good for all ages. Back in June, RJ Casey described Ben Sears’ work as the perfect story in a world of overly moralistic children’s books: “Fun is what Ben Sears self-assuredly created with NIGHT AIR and all without ceremoniously trying to make his book something capital-I important. There are no lessons here. Just joy.”

The world in NIGHT AIR feels at once familiar and new, a fresh take on the 1970s sci-fi aesthetic. Sears just seems to have a wonderful imagination—take a look at his contribution to ISLAND #8 for more evidence—and he renders impossible landscapes and fantastic characters in great detail and with a playful line that matches the tone of his stories.

A CITY INSIDE by Tillie Walden 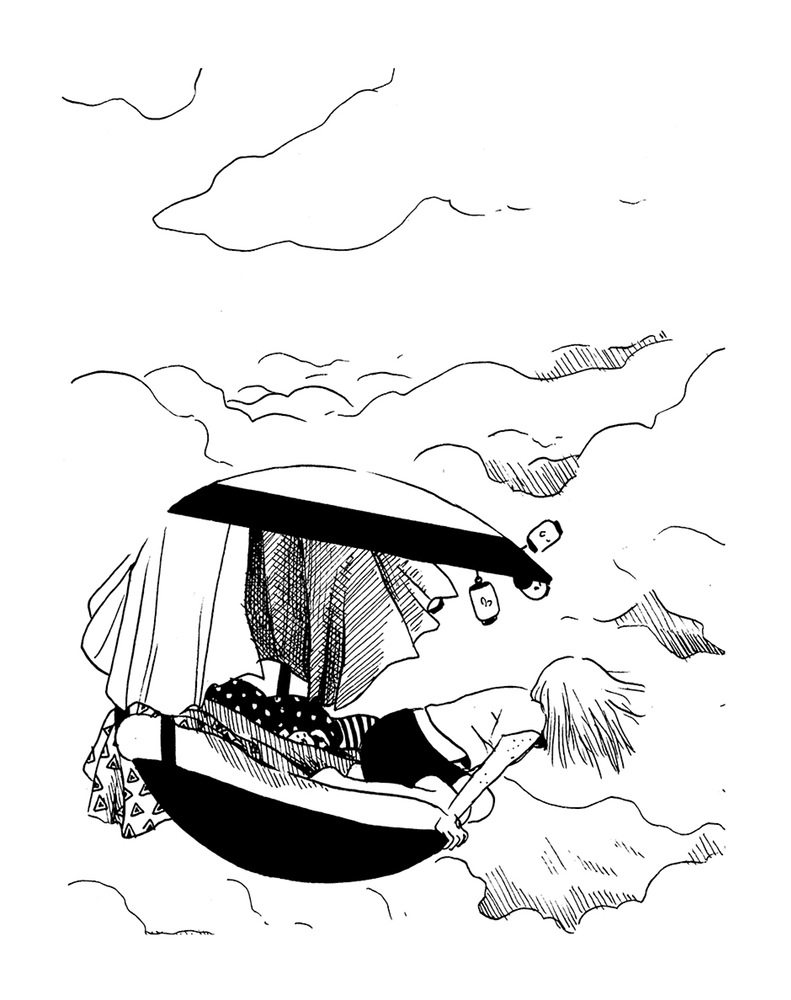 Better writers have summed up the effect of poetry, but it seems to me that the challenge and beauty of the form is its potential for capturing moments and emotions in unexpected but fulfilling ways. For the trials of the past year, I find W.S. Merin’s “To the Words” (which I first heard on the Slate culture podcast) to be comforting and energizing.

A CITY INSIDE isn’t the same kind of poem, but it’s one of my favorite demonstrations of just how poetic comics can be. I hadn’t read Tillie Walden’s work before this year, but: Wow. Her line work and surrealistic scenery recalls LITTLE NEMO IN SLUMBERLAND, but in A CITY INSIDE (and other work), she applies it with such emotional honesty.

This book is a one-sitting read, and every time I read it, I put it down feeling light. There are so many things to love and emotions to process in this short book. The cat. The grass. The stars. The bed, and how comfortable it looks. The open spaces and cityscapes. In a year of frustration for a lot of people, this book asks for contemplation and reflection. 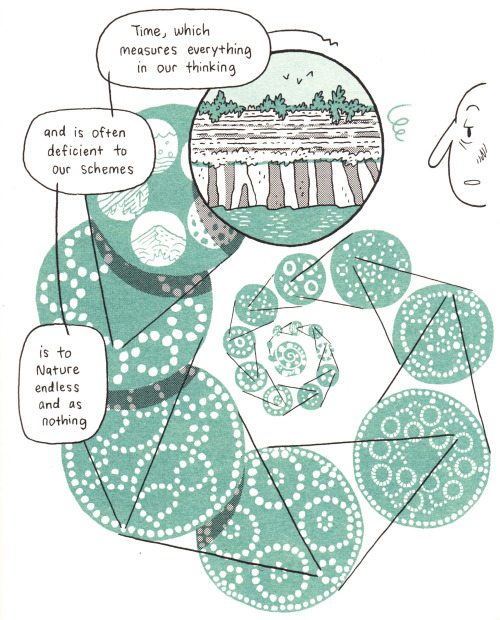 Kevin Huizenga’s series was one of my first brushes with “sophisticated” comics. I think neither artists nor actual readers of good independent and small-press work use this descriptor, but I’m a small boy in a big city, and Huizenga creates comics that make me feel cool just for reading.

Huizenga uses comics in more complex and interesting ways than I’ve seen from almost any other artist. He is a professional at graphic communication, and every issue of GANGES shows Huizenga at the height of his powers. The series features the titular character struggling and failing to go to sleep, now battling insomnia for 10 real-life years (with GANGES #1 coming out in 2006).

Perhaps it’s because this series is reaching its second decade that I find GANGES the most difficult comic on this list to contextualize in 2016. In some ways, I suppose that’s appropriate: Huizenga is brilliant in rendering the passage of time, change over time, and the relationship of time periods with one another. I love Glenn and his wife, Wendy, but as a theoretical work, GANGES continues to feel timeless. 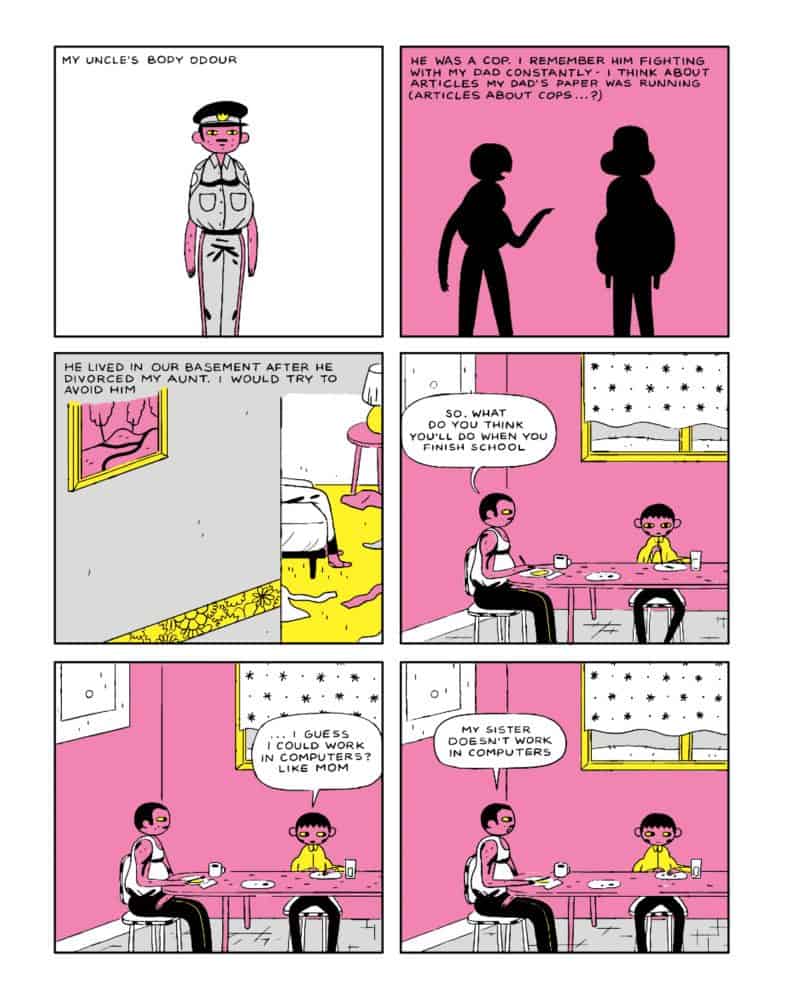 The last book in a list of comics that, again, could be much longer, is maybe the top entry on my annual list of “things that made me feel a thing.” Probably among the most accessible of Deforge’s continually expanding work, BIG KIDS is a surreal coming-of-age story of sorts, about a boy who “trees”—literally, sees himself as a tree-like creature—as an indication of a newfound maturity, and it comes with the same unique and brilliant style and gorgeous coloring that much of Deforge’s work features.

Before this year, I wasn’t a reader of Deforge’s work. I didn’t like it, and that was because I didn’t understand it, and that, of course, was because I had never actually read it. Draft headline for the year: Person Doesn’t Like Other Person. Subhead: Actually Hasn’t Even Tried. Well, I finally tried Deforge in 2016, and the climax of BIG KIDS was the most memorable scene of any comic I read this year. I’ll read anything he puts out now.

There are a lot of emotions and conflicts in this book that a better writer could undoubtedly sum up pretty well. But I realize now that the book’s final page also appropriately describes both itself and the year, and any year: “I felt a lot of things.”

They have chocolate-and-peppermint biscotti here, and it is good. I know I shouldn’t eat it, what with this darn figure to look after, but I like it. My parents used to bring biscotti home from the deli sometimes, and it was good then, too, even without the chocolate and peppermint.

In the new year, I’ll watch better movies and learn to cook. I’ll also floss and eat better, though this biscotti is likely to make frequent cameos. I’ll continue to sit in coffee-scented bubbles such as this, not even drinking the coffee—heart: “yes”; body: “for god’s sake, I can’t take the caffeine”—but, if my final New Year’s resolution holds, next December 31 I intend to have more than seven comics sitting on this table.