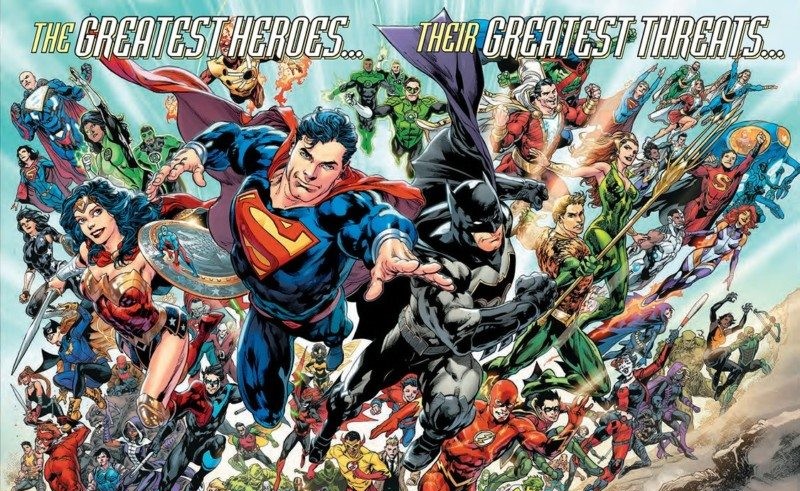 2016 has been a controversial year, to say the least, but one bright spot has been the quality of DC comics under the company’s REBIRTH initiative. With that in mind, our staff had a lively discussion debating the top five and other DC books that we think deserve attention. Bellow are the passionate explanations for the books we ultimately picked and ranked according to the number and value of votes from our editors and writers.

#5). DETECTIVE COMICS (Released June 2016-Ongoing): Batman? On a team?! Though the Bat has fought with various groups over the years, he claims to work best alone. DETECTIVE COMICS gives us just the opposite: a full-fledged Bat-team. Despite Batman’s claims, I’ve never seen him better. Writer James Tynion IV gives us a Batman struggling with his own nature. After a new threat forces him to pull together Gotham’s myriad vigilantes, Bruce must try something new: trusting.

He trusts Batwoman (Kate Kane) to train and lead the team. He trusts Spoiler (Stephanie Brown), Red Robin (Tim Drake), and Orphan (Cassandra Cain) to watch his back, and each others’. He even trusts Clayface (Basil Karlo) to join his team, despite his less-than-heroic past. Tynion’s masterful writing gives us a glimpse at the woes of each character. We see Tim struggle with a major life decision and Basil attempt to regain himself after being lost to his monstrous side. Kate struggles with her relationship with her father, a fight that ripples throughout the first arc of DETECTIVE COMICS. The conclusion of this arc leaves the whole team grieving a devastating loss.

The two story arcs so far have both deeply questioned the symbol of Batman. In the first, “Rise Of The Batmen,” Batman is confronted with his limitations. His team is viewed as too little, too late. Batman could be so much more, the villain believes. He could be an army, an unstoppable force, but Batman won’t go far enough. The second arc, “The Victim Syndicate,” asks the opposite: does Batman do too much? The villains in this arc are all people caught in the crossfire of Batman’s war on crime. They force the Bat and his team to question their benefit. After the devastating loss at the end of the first arc, this question might be enough to break the team apart! Tynion forces us to question everything we know about the Bat in these compelling tales.

The artistic team, including Eddy Barrows, Eber Ferreira, Alvaro Martinez, and Raul Fernandez, is utterly fantastic. The vibrant colors and intricately drawn details of every panel are stunning. The smooth, clean artwork is the perfect complement to the grim, gritty stories Tynion is telling. The artists excel at portraying the kind of emotions this series thrives on, and their action scenes are incredible too. I can’t wait to see where this phenomenal creative team will take the Bats next! (By Sam Sobel)

#4). SUPERMAN (Released June 2016-Ongoing): Better than Batman. That’s the first thing I would say about Peter J. Tomasi’s and Patrick Gleason’s run on SUPERMAN. In the DC REBIRTH title’s first 12 issues, they’ve managed to take our Man of Steel, stuck in second-tier throughout his NEW 52 run, and elevate him to a new Golden Age standard.

In Tomasi’s and Gleason’s hands, Superman has returned to his former glory, flying high as the hero we all grew up with. The stories they’ve told about Superman, Lois Lane, and their son, Jon Kent, haven’t just been heroic – they’ve also been human.

In their first arc, “The Son of Superman,” we became acquainted with young Jon, learning that he wants to be a hero like his dad. Through this lens, we got an all-new insight into the Man of Steel – experiencing Superman as a father. This new role brought forth emotional layers to the character, giving him more humanity than ever before. Superman’s fatherhood was also tested with the arrival of the Eradicator, a being from Krypton who wished to annihilate the “impure” Jon. As Superman and Lois fought for the life of their son, Superman came to grips with his mutual Kryptonian and Earthly heritage. His half-human, half-Kryptonian son created a perfect symbolic link between Superman’s two great homes.

The arcs that followed, “Escape from Dinosaur Island” and “Super Sons,” developed the bond between Clark and Jon even further. Most endearing of all was the one-off story “Hometown,” which saw Clark, Lois, and Jon attend a carnival incognito. On the surface, this issue was about Clark simply spending a day with his family. More deeply, it was about returning Clark Kent to his homegrown Smallville roots. He spent the entirety of the issue as a dad and a husband, only using his powers when his family wasn’t looking. It was great fun, and intentionally reminiscent of a classic Silver Age Superman story.

These terrific tales have been complemented by masterful artwork from a rotating team; including Doug Mahnke, Pat Gleason, and Jorge Jimenez. The art has been remarkably consistent in creating bold, vivid renderings of Superman and his various antagonists, giving each one a distinct look and personality. The artists have also created a painterly emotional resonance in various intimate scenes between Clark, Lois, and Jon.

Together, these terrifically talented writers and artists have created a Superman we can be proud to call our greatest hero once more. Along with Dan Jurgens over in ACTION COMICS, Tomasi and Gleason have crafted a brand-new Superman for DC REBIRTH, embracing his grand history while redefining him for a new generation. Batman can swing on back to Gotham. Thanks to Tomasi and Gleason, Superman is now the DC hero flying highest. (By Aaron Berke)

#3). WONDER WOMAN (Released June 2016-Ongoing): REBIRTH invites us to see the Amazon princess like never before. Written by Greg Rucka with art by Liam Sharp and Paulo Siqueira, DC attempts to answer once and for all, who is Wonder Woman?

Taking an unconventional approach to storytelling, WONDER WOMAN ingenuously alternates between two storylines for its first arc. Every other issue features a flashback to Diana’s life before becoming Wonder Woman. We see her first meeting with Steve Trevor as well as the origin of her lasso and the invisible plane.

In the present time, Diana is torn between two realities in her mind. All the things she’s ever known about her birth and origin seem to be unraveling. She’s also lost all contact with her home, Themyscira. Diana must enlist the help of some old friends to uncover the truth and find her way back home. WONDER WOMAN perfectly balances progressive and complete storytelling with cohesive and colorful art. Rucka expertly takes an iconic story and makes it seem brand new. Every issue effortlessly flows into each other without hiccups by utilizing careful pacing. Each new detail added to Wonder Woman’s story deepens the plot and creates a fully progressive narrative.

Liam Sharp and Paulo Siqueira do an amazing job of blending styles and panels to create scenes that perfectly embody the Amazon princess. Every setting is proof of meticulous attention to detail. Every panel is a painting and Paradise Island has never looked more beautiful. There’s no doubt this series deserves a spot on our top five list. Featuring a refreshing take on an old story and elegant artwork, WONDER WOMAN can be enjoyed by all fans, new and old. Defined by nothing short of perfect quality, REBIRTH reminds us why Wonder Woman is the most iconic superheroine of all time. (By Sable Gravesandy)

#2). SUPERMAN: AMERICAN ALIEN (Released November 2015-May 2016): (Language Warning) Max Landis once made the claim that, “Nobody gives a fuck about Superman. You don’t give a fuck about Superman, even if you think you do.” Although this may seem like a negative criticism on the character, what Landis was really implying is that Superman has historically been portrayed as somewhat bland and boring.

If you really think about it, there’s no real pathos or complexity to Clark Kent’s story outside of his nearly unstoppable, yet oddly common, superpowers (flight, invincibility, super-strength). This year, Landis got the opportunity to tell his more layered version of Superman in the miniseries, SUPERMAN: AMERICAN ALIEN. The run featured seven independent vignettes, all separate stories from different moments in Clark Kent’s life (prior to becoming Superman). Never before has this character been so exposed and humanized. Like all of us, Clark was once a kid, teen, and young adult struggling with everyday problems (but with superpowers to complicate everything).

Each issue in this series features a different artist to symbolize the different stages of Clark’s life. I mean, you wouldn’t tell a story from when you were nine years old the same way you would when you were sixteen or twenty, right? After reading the seven stories in SUPERMAN: AMERICAN ALIEN, you’ll never look at the Man of Steel the same way. (By Brad Sloan)

#1). BATMAN (Released June 2016-Ongoing): DC’s REBIRTH of Batman debuted in June 2016 along with a new writer and various artists. Scott Snyder and Greg Capullo’s take on the Caped Crusader in the New 52 will be forever missed, but thanks to writer Tom King, the Dark Knight’s REBIRTH is in good hands. King further explores the mythos of Batman, keeping the character’s familiar traits while adding new layers. Batman’s REBIRTH also includes masterful art from David Finch, Riley Rossmo, and Mikel Janin. These artists, along with their coloring team, add their own unique touch while elevating the familiar darkness of Batman’s world.

Tom King’s first arc, “I Am Gotham’, introduces a pair of siblings with metahuman powers. These new protectors of Gotham City act as a foil to Bats, for he’s truly incorruptible. We learn that even with Superman-like abilities, the city of Gotham and its villains can still corrupt you when you’re vulnerable. The story continues in the second arc, “I Am Suicide”, as Batman forms his very own Suicide Squad to embark on a rescue mission. In this arc, King not only gives new depth to Batman and his childhood trauma, but he further develops the long history between the Bat and Cat. Batman’s ethos is all too familiar, yet King reimagines new layers, touching the dark topics of suicide, death wishes, and challenging the inner monsters of the series’ characters.

The series so far has featured memorable fight scenes highlighted by fantastic artists. In “I Am Gotham”, artist David Finch and team creates a gloomy Gotham City, expressing the pain and loss of characters. We’re even treated to some glorious giant monster action by artist Riley Rossmo in two issues. The art for the series continues to flourish as the latest work, featured in “I Am Suicide”, comes from Mikel Janin and June Chung. In one memorable issue, Batman traverses Bane’s fortress and takes out an entire gun-blazing army. The art is violent, yet admiring. Janin’s explosive pencil work absorbed with Chung’s distinguished colors makes the series hard to put down.

Batman’s never looked better. The series continues to push the character towards new epic adventures while reinventing the wheel of the character’s psyche. The series has us not only invested in its titular character but the other complex characters that share the pages. No matter how dark or brooding, Batman teaches us to be heroic and to never give up. A character redefined by tragedy shines in DC REBIRTH. Due to the exemplary works of Tom King and various artists, the series remains as one of this year’s best. (By A. Chowder)