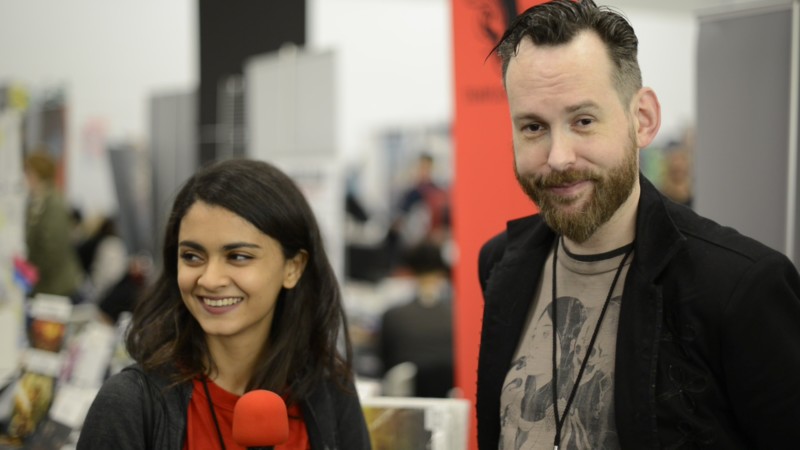 ComicsVerse got the chance to interview the wonderfully strange and talented Ben Templesmith at Five Points Fest.

WATCH: Want more Five Points Fest interviews? We got the chance to talk to Scott Snyder and Greg Capullo!

Ben answered some of our questions about his varied experience as a creator in the industry. Templesmith has worked with a number of publishers like IDW, Image and Dark Horse as both a writer and an artist. Ben is widely known for a number of his series including 30 DAYS OF NIGHT, which went on to become a major motion picture. Templesmith also illustrated Warren Ellis’ FELL, which was nominated for an Eisner award three years in a row. What is probably the most quintessentially Templesmith series is his WORMWOOD: GENTLEMAN CORPSE. WORMWOOD is critically acclaimed and holds a place as a New York Times bestseller.

Templesmith also spoke to us about the role of publishers, the differences in publishing independently and what the different ways a creator can exercise or surrender authority over their work can mean. Templesmith is currently actively using sites like Patreon and Kickstarter, which gives him and his fans a channel to communicate about his work.

BLOOD SONGS, a multi-volume anthology of viking stories, is one of the most recent projects to be born through these channels. BLOOD SONGS, which exhibits some of Templesmith’s most unique artistic choices, is a combination of both historical adaptation and fantasy. Templesmith was able to raise $86,603 of his $9,500 goal for this incredible project.

Ever the literary and history buff, Templesmith spoke of the possibility of more adaptations similar to BLOOD SONGS and DAGON, based on the short story by H.P. Lovecraft. We may see some Poe and some Ghengis Khan-inspired works from the creator in the future.