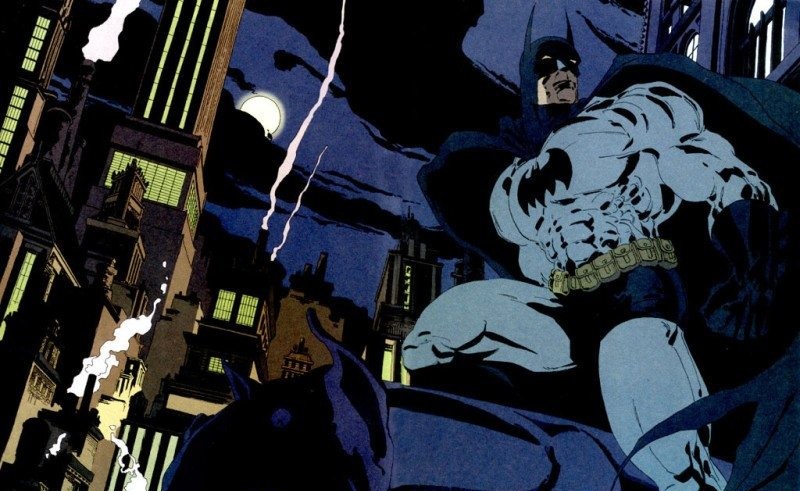 Jeph Loeb kicked off his own Batman stories with BATMAN THE LONG HALLOWEEN, which continues the style and story of Batman in his early years that was started by Frank Miller’s BATMAN YEAR ONE. Having read this for the first time, I can immediately see where Christopher Nolan got his inspiration for his Dark Knight Trilogy, particularly the gothic noir style of storytelling and the way Loeb treated Batman’s rogue gallery. Loeb treated Batman villains more as actual threats, instead of gimmicky goons who where extremely one-dimensional. Instead, Loeb threw a mixture of Batman’s villains into a mob story. One of the elements within this story that stood out to me the most was the way the character of Harvey Dent was handled. Let’s dive right in to BATMAN THE LONG HALLOWEEN.

Whenever I use the phrase Trinity when talking about DC comics I think Batman, Superman, and Wonder Woman. For this graphic novel I’m referring to Batman, Jim Gordon and Harvey Dent. At the beginning of the story we have these three men make a pact with one another: to end Falcone’s reign. They agree to bend the rules, but never break them. The way Loeb has the three bounce off one another really establishes what a great team they make. 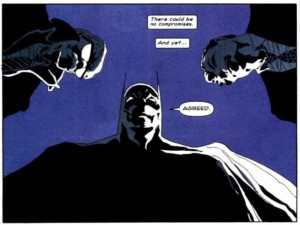 It makes the inevitable downfall of Harvey Dent that much harder to bear. A similar technique was done in Batman: The Animated Series, where they originally had Harvey as an attorney and friend to Bruce before he became Two-Face. Although the group is far from perfect, there is more than one occasion when Harvey shows signs of being not as clean as Gotham’s Golden Boy should be. We’ll get into the Harvey and Bruce duality later, but it’s important to first focus on them as a unit. The main point of this story is about they work together to take down the two major mob families in Gotham City: the Falcones and the Maronis.

Batman and the Mob

The graphic novel opens with Carmine Falcone talking to Bruce Wayne at his nephew’s wedding in a scene that looks and feels very similar to the Godfather. Pulling inspiration from what most consider to be the best mafia movie ever made is smart move on Loeb’s part. This emphasis on the mafia aspect of a Batman story was new to comics. Mobs had an actual role in organized crime in real life, so seeing Batman take them on made the story feel more realistic. Loeb had stated in an interview that he wanted to make a story in which it would be plausible for one man to make a real impact on his city when it came to taking out crime.

The connections are not only between  Batman and the mafia, but also Bruce and the mafia. In the story, Bruce’s father saved Falcone’s life years ago after Falcone had been shot. This connection led to Bruce being in jail around Mother’s Day. Alfred is able to bail Bruce out, but the fact that Harvey was the one who accused Bruce of having ties with the Falcone family showed his slow descent into instability.

The Maroni family and the Falcone family were always at war with one another, but in this story they don’t just have Batman to worry about. There is a new player in the game and his shtick is holidays. One by one members of both families start to get killed off. 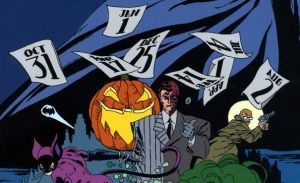 On the surface, BATMAN THE LONG HALLOWEEN is a mystery story. There is a new holiday-themed killer who makes Calendar Man a little jealous and of whose identity no one seems to have any clue. While I appreciate a story that takes place over the span of time, I can’t help but feel frustrated at how long it took Batman to stop Holiday. Holiday made it abundantly clear that he kills a member of the mafia on a holiday on a particular month. This should make anticipating his murders easy. However, it takes Batman over a year to finally catch Holiday, despite how simple it should be to know when he will strike and who he will probably kill. 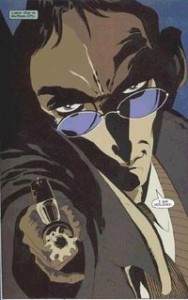 Regardless, I found Holiday to be very intriguing, no matter who was playing him. Holiday doesn’t seem to have any side- granted he kills a majority of Maroni’s men, but he kills some of Falcone’s men as well. Batman and Gordon manage to catch who they believe to be the true Holiday Killer when attempting to move Maroni from his cell. It appears to be Alberto, one of Holiday’s earlier victims, who had faked his own death. Alberto Falcone loves the attention and soon admits to all of the Holiday murders. Being the son to Falcone, his motivation was essentially “Daddy didn’t love me because of work,” and that sort of brought down the character’s edge. However, another exciting development occurs.  Due to Maroni’s treachery and deception, he doses Harvey Dent with acid on his face! This leads to Harvey’s final transformation into Two-Face, who is possibly the other Holiday Killer. 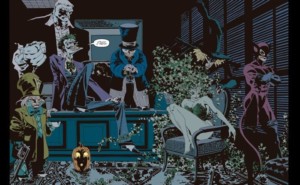 This story featured many of Batman’s villains- a bit too many for my taste. After Holiday takes the lives of several members of the mafia, Falcone begins to employ rogues such as Poison Ivy and Scarecrow to stabilize his empire. Poison Ivy is used to brainwash Bruce into giving into Falcone’s demands of wiring money into Falcone Imports from the Gotham City Bank. Thankfully, Catwoman is able to break Bruce free from Ivy’s hold. In fact, Selena plays a role in both Bruce’s and Batman’s life. Before I get into what Falcone uses Scarecrow for, I want to take a moment to focus on Poison Ivy’s and Catwoman’s designs.

I mean no disrespect to Tim Sale- he is a tremendously talented artist- but I feel he went a bit overboard with Poison Ivy. She is practically engulfed with leaves wherever she goes. Ivy has a fascination and even a control over plant life; this was made obvious by her outfit made of leaves. Having leaves be a part of her anatomy seemed like overkill.

Speaking of overkill, this has to be my least favorite Catwoman design. She has whiskers and a tail for goodness sake! What purpose could whiskers and a tail serve a cat burglar? There is none that I can think of, and I feel that they were only added to make Catwoman look more catlike. The best design of Catwoman, in my opinion, is from the Arkham games, where she does have cat ears, but that is the extent of her feline appearance. There is no need for tails or whiskers when stealing anything.

LISTEN: The Origin of One of Batman’s Oldest Enemies!

Speaking of stealing, Falcone decided to employ Scarecrow and The Mad Hatter to rob a bank. Only in a Batman comic would a former psychologist who dresses like a scarecrow and a cosplaying midget be hired to rob a bank on horse drawn carriage. I understand that Batman’s rogues needed to be used to show that this is a Batman story, but some of them felt like they had very little purpose being involved. One of these rogues who I feel served almost no purpose other than just to wreak some havoc was the Joker. 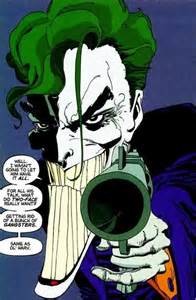 The Joker shows up sporadically throughout the story either to kill a random family or mess with Harvey Dent. If the Joker was removed from the story, the only differences would be that the story would be shorter and we would have vacant spot towards the end of the graphic novel when all the rogues are together. I love the Joker as a villain, he provides a stark contrast between Batman’s personality and is clearly the ying to his yang, but I feel that the Joker was shoehorned into this story simply because he’s the Joker. I’m also not a huge fan of his character design, either- it looks like Tim Sale gave him hundreds of tiny dagger-like teeth.

The main Batman rogue, and definitely the best in terms of this story, is clearly Harvey Dent/Two-Face. His character design is perfectly haunting; readers can still see remnants of Harvey Dent still existing within Two-Face. This design and the way the character was written makes the final scene with him in Arkham soul-crushing. He falls into the darkness that he is trying to save the city from and loses his love, Gilda. 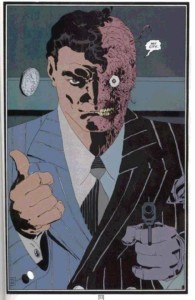 The Duality of Man

This is a common theme throughout many Batman stories, simply because how effective it is in describing Bruce/Batman. However this theme is even more poignant when dealing with the character of Two-Face. Throughout the story, Harvey struggles to maintain on the straight and narrow when dealing with Maroni and Falcone. Loeb shows subtle signs that Harvey has a dark side in him; when he and Batman burn $20 million in cash that Falcone keeps stockpiled in a warehouse, Harvey remarks how easy it would be to take it and make a clean getaway without anyone knowing.

The other character who displays duality with their personality is not who you might expect, or at least I didn’t expect them. Harvey’s wife Gilda seems to be an unsuspecting woman who knows very little about her husband’s work, but at the end of the story, it is revealed that she was responsible for most of the Holiday killings. Initially, this reveal felt like it came out of nowhere, but after reading it again, I noticed the subtle clues left by Loeb throughout the story. For example, Gilda shares her dream with Jim Gordon’s wife of one day having a family with Harvey, and also tells how she wishes the Falcone empire would come to an end so she could have Harvey to herself. Calendar Man also hints at there being more than one Holiday killer by using both male and female pronouns when talking about Holiday to Batman. Gilda becoming Holiday was unexpected, but it certainly speaks volumes as to how much she loves Harvey, especially since at the end of the story she still believes in Harvey Dent.

So many elements of this graphic novel can be seen in Christopher Nolan’s Dark Knight Trilogy. One example is the partnership between Jim Gordon, Batman, and Harvey Dent. The scene where they are on the rooftop discussing how to get Lao from Hong Kong so Harvey can get him to confess felt almost identical to the scene in BATMAN: THE LONG HALLOWEEN when the three men discuss how to stop Falcone. The fall of Harvey Dent is also apparent in The Dark Knight as it was in the graphic novel. However I feel Christopher Nolan almost perfected the fall of Gotham’s Golden Boy. In  The Dark Knight, Nolan really shows how much faith the citizens of Gotham have for Harvey Dent, and Dent returns the favor by putting a majority of the mob in jail. By putting Harvey on such a high pedestal in the film, it really made an impact when he became the villain Two-Face.

Both the graphic novel and the film are some of the best pieces of the Batman mythos. Jeph Loeb has created one of the most influential Batman stories, showing that Gotham’s villains can be sinister while maintaining what makes them unique. Any future film trying to capture a comic book Batman story but still make it relatable to real life needs to check out BATMAN THE LONG HALLOWEEN.

Check out more from Fabio!