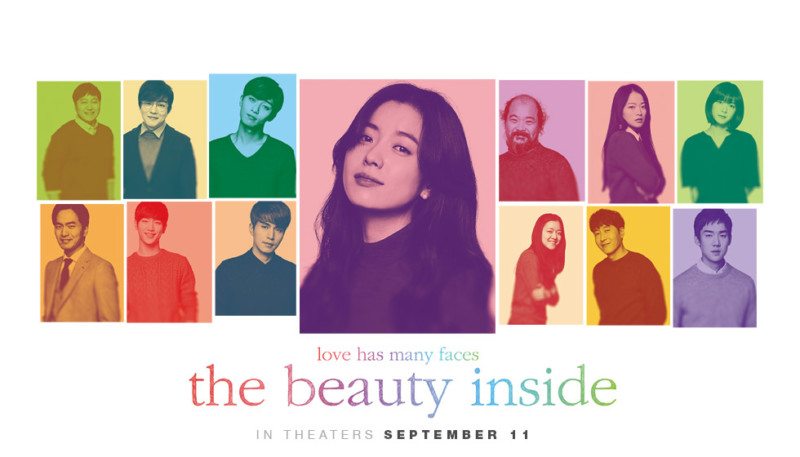 “Love conquers all,” but what exactly does it have to conquer? THE BEAUTY INSIDE, a 2015 South Korean film based on the interactive American film of the same name, shows that sometimes people can feel like their love can’t conquer reality. The main character, Woo-jin, has a condition where his appearance significantly changes every time he wakes up. He can be any gender, any race, and any age, even though he is still a young adult chronologically. Because of this, it is nearly impossible for him to form any real friendships or relationships. However, he miraculously ends up in a close relationship with Yi-soo, a woman who he bonds with over furniture design. The movie shows much of their blissful romance, which emphasizes their incredible struggles later on. Their fantasy hardships can serve as a metaphor for the many struggles that individuals and couples have to endure in their own romantic lives, from personal illness to social stigma as an atypical couple.

One of the finer points of the film is the realism of Woo-jin’s situation. He lives in obscurity, his condition only known by his mother and Sang-baek, his best friend. He works as a furniture designer and Sang-baek takes care of the sales. He cannot work as anything that requires people seeing his appearance since it changes daily. At home, he has a vast array of clothing, shoes, glasses, and so on, to manage his random transformations. One day, he can have perfect eyesight, the next, he can be nearly blind.

Initially, Woo-jin doesn’t tell Yi-soo about his condition. He falls in love with her by interacting with her at a furniture store as a different person every day. When he is handsome, he decides to ask her out and forces himself to stay awake for three days straight so he doesn’t transform in his sleep. Unfortunately, he can’t keep this up and stops contacting her once he’s changed, since he is no longer the guy she knows. Plus, after he first reveals his secret to her, she recoils in disbelief, breaking his heart. Woo-jin thinks about how he knew that having a relationship with someone was a long-shot, and how he had already grew accustomed to loneliness and rejection. Sometimes, when people open up about their personal concerns, potential romantic partners are taken aback; they don’t want to deal with such a great amount of “baggage.” So, rejection becomes familiar.

The way Woo-jin copes with his condition can mirror many people’s individual struggles. Certain medical conditions can be deal-breakers for others, which makes it hard for some people to feel ready for a relationship, especially when those conditions are appearance-based or not necessarily well-received. For example, auto-immune disorders like alopecia cause people to lose their hair, regardless of age. Becky Harris from Buzzfeed previously opened up about her struggles with alopecia, and how it affected her sense of beauty and her relationship. Fortunately, both Becky and Woo-jin found people who love them all the same.

CLICK: Check out our interview with Kim Jin-Hwang on his film THE BOYS WHO CRIED WOLF

This can also reflect “coming out” for some people. When Woo-jin confesses his condition to Yi-soo, he is actually in the form of a young woman, which may have further provoked Yi-soo’s initial disgust. However, she swiftly accepts his situation. When he turns into a Japanese woman later, Yi-soo still talks with him and spends meaningful time with him. This may only be because she still views him as a “man,” since he considers himself one, but this can also indicate Yi-soo’s open sexuality in response to Woo-jin’s gender fluidity.

Oftentimes, we focus on the half of the couple who has the condition. Of course, their partners should be sympathetic and understanding, but that doesn’t mean that they don’t also struggle. Yi-soo is ordinary. She is beautiful, but she’s also, compared to Woo-jin, an ordinary woman living an average life. When someone as fantastical as Woo-jin comes into her life, she is both curious and scared. At the start of their relationship, she works with him and his condition. She actually looks forward to seeing a new him every day and falling in love with him again every day. However, when reality sets in, she starts to take medication for her stress.

Her coworkers start to gossip about her, saying she is dating a different man every day. Her sister snoops through her phone and finds pictures of her and Woo-jin, but to her, it just looks like Yi-soo with random people. Eventually, Yi-soo can no longer put off thinking about the inevitable: how could she explain to her family, or to anyone, that her boyfriend transforms daily? She personally recognizes the great disbelief that each of them will feel, and understands that Woo-jin can’t be obligated to let every single person stay overnight and watch him transform to prove himself. By being with him, she gives up the path of a normal life, since the kindness and understanding of others is not guaranteed. Plus, although the film doesn’t mention this at all, her sexuality could come into question, but this is largely dismissed since Woo-jin considers himself a man and is generally considered a man by all who are aware of his condition.

By no means is she unsympathetic to Woo-jin, but she has to think about herself, too. This inner conflict happens all the time. In his poem “OCD,” Neil Hilborn describes his relationship with his ex-girlfriend, and how she loved and accepted him, and his compulsive ticks. At first, she found his repeated actions endearing. She loved how he checked the locks eighteen times, and how he flicked the lights on and off. Yi-soo also enjoyed being a part of Woo-jin’s unique daily habits. However, in the film, when Woo-jin challenges her to find him in a crowd of strangers, she is faced with an unpleasant shock. Unfortunately, both Yi-soo and Neil’s girlfriend end up leaving. Yi-soo, just temporarily.

What is the value of THE BEAUTY INSIDE?

Finally, when Woo-jin leaves Korea to work in the Czech Republic, Yi-soo resolves her feelings and realizes she can’t be without him. She makes the decision to stay with him, despite all her previous concerns. They both propose to each other and begin their life together. This ending is somewhat bittersweet, since while love does conquer, it isn’t an overwhelming victory. Yi-soo understands she will likely get sick again, just from dealing with the daily shock of coping with Woo-jin’s new appearance. She will live with the reality that she will never remember him by his face. Woo-jin also lives with the reality that he is taking Yi-soo away from normalcy.

LOOK: Read about FRONT COVER, a film about Asian-American struggles with sexuality!

This is, of course, an extreme situation, but not unlike life’s many hurdles. The great strength of THE BEAUTY INSIDE is that it can show audiences, ironically, the reality of compromise in relationships. Whether someone is coming out to their crush, or a couple is coming out to intolerant family members, those people can relate to this film. Those who struggle with invisible illnesses can also relate to Woo-jin’s fear of rejection and struggle with loneliness. People who love those with certain conditions, and who have to figure out how to make their friends and family understand their partner’s struggles, can relate to Yi-soo. Then, everyone in between can admire the resilience of the film’s couple, and their flexibility and dedication to each other, and take note.

The film ends with Yi-soo accepting Woo-jin in all his forms, regardless of age or gender. This is the ultimate message: although there may be terrible battles to overcome, love is greater than all of them, if people let it be. It is greater than illness, greater than appearance, and greater than others’ approval. It cannot cancel any of those struggles out, but it makes them ever so slightly more manageable. In the end, there are so many who already know this, but it is great to see it over and over again, and THE BEAUTY INSIDE captures it all.