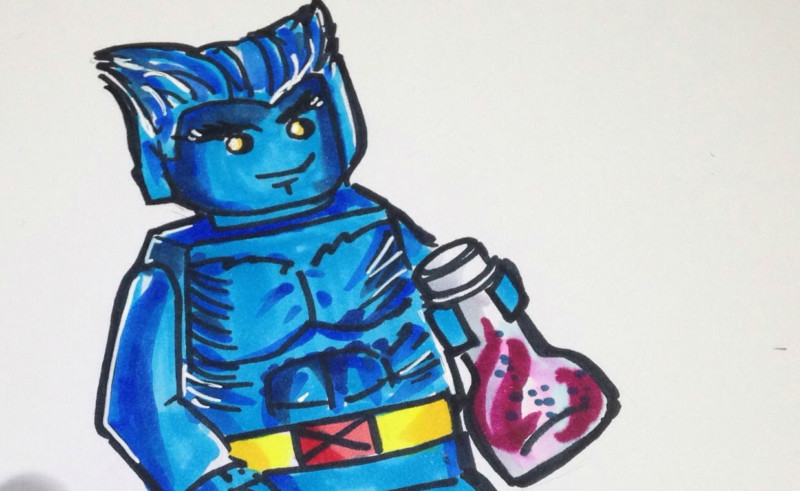 Beast never seems to get a whole lot of love. In my opinion, people glance over him and simply acknowledge his presence in the X-Men canon; but I’ve never heard anyone shout from the rooftops how much they love this character. It’s understandable. He’s a hulking blue creature who just so happens to be a genius. Yet I must admit, I’ve always had a soft spot for the big guy. Not only because he reminds me of the Beast from BEAUTY AND THE BEAST, but because when I see him, I see myself. He’s someone who has to force others to see how he too is an intellectual despite his appearance.

The Past Me and School

This may come as a surprise, but intellectualism wasn’t always my strong suit. For years I remained within the shadow of my twin brother. Don’t get me wrong; I admire him to no end. He has a brilliant mind that solves problems of science and math like no other. One time as 5-year-olds we took this math placement test to see what math section we’d be in for kindergarten. My brother only counted to 10 during an evaluation, the largest number they required at the time, even though he could count higher and the tester knew it — he just felt lazy and didn’t want to go beyond the requirement. Teachers and parents alike basked in the glow of his skills. They were like moths to a flame, incapable of deterring the magnetic pull his skills had on them.

I on the other hand… I wasn’t quite as gifted. My performance wasn’t awful, but I struggled hard to do mediocre. I’d spend hours upon hours with my parents reviewing the same few words for a spelling test. I’d grow red in the face trying to master multiplication tables that my brother understood with ease. It turns out, a huge reason I performed worse than my brother was that I had undiagnosed dyslexia; a learning disorder that made reading and, in my case, math nearly impossible to do.

It didn’t get addressed until we switched schools in the 5th grade. A teacher noticed I struggled and forced me to confront my frustration instead of giving up, even going so far as to tell my parents about his hypothesis for why I had problems. Everything would eventually work out, but once you get this reputation of being the “dumber” twin, it’s hard to shake off. I didn’t look like the kid who was going to ever amount to anything more than I had. I guess that’s why I really identify with the character of Beast.

READ: Want another in-depth analysis of X-MEN properties? Check out our look into the DARK PHOENIX SAGA

Sure I don’t look like a blue, hairy monster after two P.M. Yet I really sympathize with Beast’s general dichotomy of being someone who doesn’t look like they should be smart. I’m not saying there’s a “look” in being smart. Anyone can achieve whatever they wish to achieve, follow your dreams and all that jazz, but I’ll be the first to admit it was hard forcing people to see me as an academic competitor for most of my young life. Or believing it myself for that matter.

It only happened once I got into middle school and accidentally found myself just shy of the honors list for my grade. I realized how close I was, and thought if I tried a bit harder I could get my name with the smartest kids in the school. While I never would achieve the level of science mastery that Beast did, I did well enough. Beast looking how he does, a beacon of primal strength, often doesn’t imply there is anything going on upstairs.

READ: Need a review of a recent X-MEN title? Check out our review of X-MEN BLUE #2

I resented my brother’s skills for years so when I had the chance to prove myself I wanted nothing more than that kind of acknowledgment. Though as time wore on, like Beast, I realized that wasn’t something I needed. There’s nothing to prove. The only thing that matters is that you try your hardest and do it because you love what you study. It takes a long time to come to this realization, so it was nice to know someone written with such a superior mind faced the same struggle.

Comics as Point of Identification

While there isn’t an exact parallel in Beast’s story that fits with my realization, I remember a specific scene from the original animated X-Men series that I don’t think I’ll ever forget. Beast quietly read a book in his cell, on trial for harming a human or, more likely, just being a mutant. If I recall correctly, Jubilee asked him why he wasn’t more upset with his situation. She didn’t understand that he saw no reason to fight back because he’s innocent. He just kept reading his book with those glasses on his face that were honestly way too small for him. That struck a cord with me. He didn’t feel the need to prove to anyone that he fit their expectations. He knew who he was, and that’s all that counted.

The classic “don’t judge a book by its cover” trope embodies the character of Beast. Like all kids struggling to find their place in a world that won’t quite see them as anything more than their given place, it’s nice to know that they have this character to look up to. He’s not exactly the deepest character. After all, he is a really smart man inside the body of a beast. Yet he does not allow his appearance and defined social roles tell him what he can and cannot do.