Marvel Studios’ Kevin Feige alluded to future plans for Kamala Khan’s character to headline her very own MS. MARVEL movie! BBC News contacted ComicsVerse to request an interview with ComicsVerse Marvel Section Head Editor Kat Vendetti. In the interview, Kat outlines how important a MS. MARVEL movie will be to fans of all shapes, sizes, and colors!

BBC News: Is America ready for its first female Muslim superhero? Actually, I should say first on-screen female Muslim superhero because Kamala Khan aka Ms. Marvel already exists in the paper comic world. But now, the company president suggested that some kind of movie may be in the earliest stages of pre-production.

G.Willow Wilson: I got a call, out of the blue from two editors at Marvel comics and they pitched me a very simple idea. We want to create a new, young American Muslim superheroine and put her on her own monthly comic book series.

G.Willow Wilson: I went silent for a moment because inside, I was thinking, “No, you’re crazy. You’ll have to hire an intern just to open all the hate mail.”

BBC News: That was G. Willow Wilson, speaking at her TED talk.

BBC News: Kat Vendetti of ComicsVerse, which uses the high art of comics, as their website puts it, as a platform to discuss issues that promote positive social change told me first what she knows about the possible movie in the possible pipeline.

ComicsVerse: Kevin Feige from Marvel studios has said that she’s going to be appearing in a future movie. I think that’s the most logical trajectory, given how the movies have been going.

BBC News: And she already exists on paper as an identifiable character. As Ms. Marvel but also as Kamala Khan?

ComicsVerse: Yes, and she’s fairly new. She debuted, I think, in 2013. Since she made her premiere in the comics, she’s been hugely successful. Her series has made so many bestseller lists, has gotten so many reprints. She’s made animated appearances. So it was just a matter of time before she would make her big screen appearance as well. 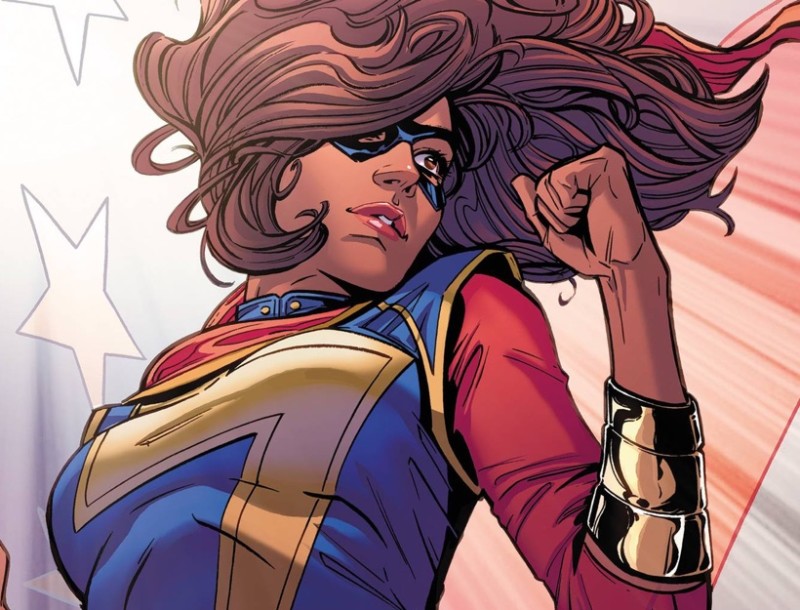 ComicsVerse: You know, speaking to the success of Black Panther, it just shows how needed these movies are. I’m a white woman, so I’ve had plenty of characters myself that I can look up to with Wonder Woman and with Captain Marvel coming up, which isn’t a whole lot to say. Given my experiences watching Wonder Woman and the excitement I feel for the Captain Marvel film, I can only imagine how others might feel getting to know Kamala Khan in a MS. MARVEL movie.

BBC News: Do you think it’s a boost for Marvel’s intentions or maybe a slightly worrying element that there will be a lot of responsibility on the studio … on the filmmakers because there’s so much anxiety in the Muslim American community about discrimination. They need to see a positive role model.

ComicsVerse: I don’t know if I have much authority to speak on that a whole lot. What I can say is that when Kamala Khan first made her debut in the comics, there was a lot of backlash and criticism.

ComicsVerse: G. Willow Wilson, I think, has said before that she wasn’t sure what kind of success her character would have, but Kamala has been hugely successful for a variety of reasons. She’s incredibly relatable as a character. Anybody can see themselves in her.

ComicsVerse: The idea of the modern American hero is not Peter Parker or Captain America anymore. It’s a character like Kamala Khan. She’s more reflective of the experience that you can have as an American.

BBC News: And you won’t be surprised Kat, that there’s already a huge amount of online speculation about casting. About who should play such a potentially influential role, and there are some pretty feisty opinions.

ComicsVerse: I’ve only heard a little bit so far. I’ve heard a lot of people pinpointing older Indian actors. A character like Kamala should be played by somebody younger. She’s 16 in the comics, and I think it would be nice to have somebody younger and Pakistani, somebody relatively unknown that can kind of break their way into the Marvel Universe in films the way that Kamala Khan has in comics.

BBC News: Thanks to Kat Vendetti from ComicsVerse in the US.

Can’t wait to see a MS. MARVEL movie? While you wait, you can subscribe to the comic book series here! Also, here’s something else you might enjoy!