With BATWOMAN #1 arriving in March, the world of DC is about to become a little more exciting, and as the saying goes, March comes in like a lion…

Created by writer Edmond Hamilton and artist Sheldon Moldoff, Batwoman was introduced to the DC universe as Katherine “Kathy” Kane, a wealthy heiress who was inspired by Batman’s heroics and decides to join the masked crime-fighting crusade. Ironically, Batwoman was originally included as a potential love interest for Batman to combat the homosexuality rumors spread by psychiatrist Fredric Wertham. Luckily, DC decided to reinvent Batwoman, rewriting her as a lesbian ex-solider, kicked out of the military as a result of the former Don’t Ask, Don’t Tell policy, ultimately creating one of the most famous LGBTQIA+ superheroes in the world.

READ: Want more LGBTQ+ representation in comics? So do we! Read about our opinion here.

Since then, Batwoman has become not only an iconic DC character but also a powerful social and political statement, giving the queer community a high-profile LGBTQ+ champion to represent them in the boldest and most badass of fashions. In this current political climate, Batwoman is not only relevant regarding her queer identity, but also her Jewish identity.

2016 and the beginning of 2017 have not been kind towards minorities, seeing a surge in hate crimes against those of different ethnicities, nationalities, sexualities, genders, and religious orientations. In addition to the horrific Islamophobia that has become more visual since the recent Presidential election, seen through the unfair banning of Muslim refugees and targeting of Muslim American citizens, the U.S. has also seen a rise in anti-Semitic violence and threats, seen in the vandalizing of Jewish cemeteries, tagging of swastikas in Jewish neighborhoods, and increased bomb threats towards synagogues and Jewish learning institutions. Furthermore, on International Holocaust Remembrance Day, a day dedicated to acknowledging those targeted and killed during the Holocaust, the President failed to actively recognize the millions of Jewish lives destroyed by Nazi terror. Stating that “It is with a heavy heart and somber mind that we remember and honor the victims, survivors, heroes of the Holocaust,” Trump had pulled an “All Lives Matter,” basically erasing Jewish lives and failing to acknowledge a specific brand of evil that has targeted an entire people, and that continues to show up in modern manifestations, as seen through the emergence of the Alt-Right movement and other anti-Semitic organizations. Furthermore, going on what he had said, if he had wanted to acknowledge all the victims, he should have mentioned actual groups who were victims along with the Jews, such as the Romani people, physically and mentally disabled persons, LGBTQ+ individuals, all minorities that Trump barely acknowledges, let alone protects.

While many people turn to superhero comics to escape the darkness of reality, others, such as myself, turn to them to find inspirational figures who actively fight injustice and who reflect their identities and experiences.

READ: See our opinion on why art needs to be political in this day and age!

While Batwoman’s sexuality is often the most prominent part of her character, her Jewish identity can be seen in various instances throughout the comics, such as in 52 #33 in which Batwoman is seen celebrating Hanukah with her then-girlfriend, Renee Montoya. Her religious affiliation is explored more prominently within DC BOMBSHELLS, written by Marguerite Bennett and drawn by Marguerite Sauvage, a comic books series that take place in an alternate World War 2 universe in which the Jewish super-heroine is seen fighting against anti-Semitism, both on the American home front and overseas. In this comic, Batwoman is loud and proud about her Jewish identity, interlacing Yiddish in her daily quips and unafraid to challenge anti-Semites at every turn. In DC BOMBSHELLS #8, while Batwoman is on the lookout for someone, she encounters a man who is trading the names of Jewish refugees to German forces, and when confronted he acts confused, wondering why she should care, responding, “He was just a Jew,” to which she grabs him by the collar and states, “So am I.” In a time when her entire ethnicity was being targeted for mass genocide, when being Jewish was, and still is, thought to be reprehensible, Batwoman refuses to give in to shame and evil, representing empowered resistance that everyone should embody, superheroes and civilians alike.

With Batwoman, I see a picture of myself, of someone deriving strength and pride from her community, a family and culture instilled with a rich history dedicated towards survival and resistance against evil. As a soldier, Kate Kane had hoped to fight for the ideas of truth and justice. As a superhero, Batwoman continues to fight for those ideas, but without the political restraints of the military that discriminated against her and took away her freedoms and rights. Batwoman, simply by existing, has the power to create a positive effect in media, not only by presenting a strong, nuanced queer woman but a Jewish one as well.

Comics have already shown the impact of including religious minorities in representation, as seen by the success of Marvel’s MS. MARVEL, a series about a young Pakistani-American woman who is also Marvel’s first leading Muslim superhero. Throughout the comics, Kamala Khan (aka Ms. Marvel) confronts not only super-powered villains and evil masterminds but also the subtle evils that we face today, such as bigotry, taking place in the form of gentrification or ignorant stereotypes against her Desi-Muslim background. Not only has Ms. Marvel been an inspiration for young individuals who look like her or come from first-generation backgrounds like her, her image has literally been used as a tool for activism. When Islamophobic ads were placed on various buses throughout San Francisco, Ms. Marvel’s picture was pasted over them, proclaiming words such as “Free Speech isn’t a license to spread hate” or “Stamp Out Racism,” demonstrating the ability of fictional superheroes to enact justice in the real world as well. 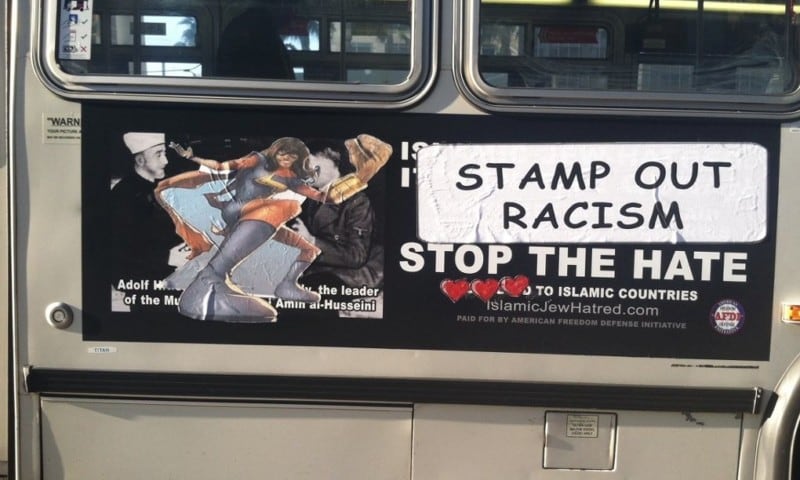 Comics have demonstrated again and again that to enact heroism on the page is to also inspire heroism in life, and by providing focus to religious minorities, such as Ms. Marvel or Batwoman, comics have demonstrated their ability to actively fight against negative stereotypes and present positive representations of underrepresented minorities. Batwoman is many things: a superhero, an ex-soldier, a lesbian, and a woman of Jewish descent. Thus, with the release of BATWOMAN #1 and the rise of anti-Semitism in America, Batwoman has the potential to present positive Jewish representation as well as provide a symbol of inspiration for heroism and bravery that is needed in these turbulent times.