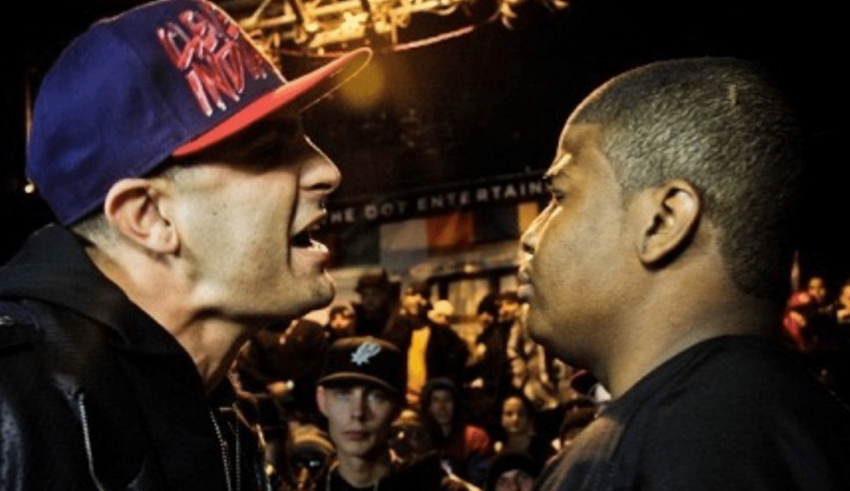 From comedic parodies to famous artists trading diss tracks, the art form of battle rap is prevalent in pop culture today. Many people may be familiar with the mainstream short-form viral videos, or they may know about the competitive world of professional battlers. There may still be folks whose sole knowledge of battle rap stems from Eminem’s 8 MILE film. But battle rap as an art form can largely be defined as either professional competition or humor-centric mainstream battles. And while it’s understandable why the two don’t cross over, it’s a shame, considering the potential of both.

Battle rap, as an art form, is a combination of many things. Obviously, it’s a lot like rap music, but the writing is all specifically about beating an opponent. In a way, it’s like the Comedy Central roasts, where comedians make jokes at each others’ expense. Two opponents seek to tear each other down, with insults, jokes, or displays of superior penmanship. It’s not the kindest form of art, but it does require a great amount of skill.

READ: Is modern music becoming nerdier? Find out more in our analysis here!

There are many instances of rap battles in pop culture. Whether or not you know much about battling as a whole, you’ve likely heard of Epic Rap Battles of History (ERB). The incredibly popular YouTube channel has turned battle rap into a battle ground for various well-known characters. Outside of ERB, there are various instances of viral rap battles. The MTV2 improv show, Wild N’ Out, features freestyle battles in every episode. James Corden has his “Drop The Mic” segment, which features him battling various celebrities. Perhaps it’s because all these battles feature well-known personalities, but these types of battles tend to blow up and go viral. Therefore, a casual viewer may only associate battle rap with videos like “T-Pain vs Chocolate Drop” or “Hitler vs Vader” (yes, that’s real).

But on the flip side of this, you have the world of professional battle rap. Several battle rap leagues exist all around the world, with hundreds of competitors. Battle rappers have devout followers and millions of views to their name. Many events have even featured celebrities as co-hosts, such as Drake (Pat Stay vs Math Hoffa), P Diddy (URL’s Summer Madness 2), and Method Man (Daylyt vs Chilla Jones). Some mainstream artists have even jumped in the ring on occasion, like Joe Budden and Madchild. What makes this form so much like a sport is that it’s usually far less comedic than things like ERB. Battlers have well-crafted insults, wordplay, and threats to go at their opponents. And unlike the short-form battles, these battles can go up to an hour in length. The world of competitive battle rap is far different than the pop culture norm, but it has cemented its place in history.

So why is it that the two worlds are so separated? Both the mainstream and professional battles are similar in style, albeit in two different directions. It’s still competitors going at each other, using rhymes over weapons. There has been some crossover between the two worlds—many battle rappers have gotten roles on Wild N’ Out, and a couple of battlers have been featured in some Epic Rap Battles. But there’s a clear separation between fans of either form. Casual viewers tend to latch onto passing viral videos, but never bother to delve more into the art form. Even when the professional battling world gets mainstream attention, it’s usually for crazy antics over great performances.

Making the distinction between humor and drama, however, isn’t wholly accurate. Both fields have crossover in their content, when it comes to writing style. As the Epic Rap Battles have grown, the lyrics have gotten more complex, going beyond basic jokes. Meanwhile, many professional battlers strike a balance between bars and jokes, like Kid Twist or Carter Deems. It’s why ERB and Wild N’ Out pick up battle rappers to join their ranks. Both forms have performances that differ in style. Hypothetically, a viewer can find battles they like or dislike in either form.

The major thing the more mainstream battles have in their favor is content. Many of these novelty battles primarily focus on humor, rather than real biting material. Professional battle rap, on the other hand, get as serious and crude as you can imagine. Beyond the general vulgarity, professional battles can also make personal attacks on competitors that ruin their lives. There’s a well-known battle, Caustic vs Jefferson Price, where one competitor exposed his opponent for cheating on his wife, and ruining his marriage. It’s turned away many fans and battlers alike—former battler Nocando wrote a piece all about how he was turned off from battling. This level of ruining a person’s life isn’t exactly explored when James Corden is playfully mocking guests on his talk show. The more serious rap battles go far and beyond what you might expect, and therefore turn many would-be viewers off.

What these more serious battles have, unlike the mainstream videos, is a feeling of authenticity to hip-hop culture. While the parodies make for great entertainment, they don’t feel as entrenched in rap as these bigger battles do. People shouldn’t expect recreations of 8 MILE in these battles, but it’s in the same vein as the film. Watching two emcees clash gives you the same feel as when big-name rappers drop diss tracks (see Drake’s takedown of Meek Mill). Hence why many well-known rappers pay attention to the battle culture. Battle rappers are often versatile in their writing, shifting from biting insults to clowning on opponents. And above all else, battle rap is all about skill. The raw effort and energy poured into these battles helps to make them feel so powerful.

The biggest thing keeping the two separate seems to be an issue of convenience. The viral battles have already found their place in pop culture, with millions of viewers. But professional battling has mostly been relegated to a subculture of hip-hop heads. And while the short form battles have celebrities or well-known characters, few battle rappers have that same draw. And it takes a lot to truly get invested into the more underground scene. With so many battles, over the course of at least a decade, it’s hard to play catch up. The biggest battlers are those who get on TV shows, or find some level of success in the music industry.

This isn’t to say that battle rap is totally unaccessible to first time viewers. The biggest problem is that casual viewers are rarely made aware of the sporting side. It takes independent research, or friends well versed in battle culture, to make the introductions. There’s plenty of material for fans of mainstream battles to latch onto in the professional world. I was made a fan of battle rap back in 2011, and all it took was a 12-minute battle from the early days of battling. Saying all battles are overly crass and violent is a misinformed generalization. Hence why battler Real Deal wrote an article contradicting Nocando’s negative assertions about battling. The biggest separation between the two cultures doesn’t come down to pure content alone.

It’s the idea that there has to be a separation which fuels the divide. It’s easy to draw lines between the two forms and call them total opposites. However, there are plenty of parallels between the mainstream hits and the underground clashes. At the end of the day, both forms put the most value on pen game. Whether that be through pop culture puns or total character breakdowns, it’s about how well you write your verses. The variance in style isn’t so stark that the two forms can only be enjoyed separately. Not everyone will love every battle out of either format, but that’s life. It doesn’t change the fact that both camps are producing awesome content.

Neither form of battling is inherently better than the other. They both cater to a wide variety of styles and content. The mainstream battles find popularity due to big names and easily digestible length. The longer sport of battling goes into every level of advanced wordplay and character assassination you can imagine. But both, at their core, are about finding dominance through the spoken word. It’s the same kind of fire that fueled B-Rabbit in 8-MILE, just in a different form. Battle rap, like all things, evolves and splits off in different directions. What’s fantastic is that either path will give you an enjoyable experience. Help close the gap between the two forms, and lose yourself in all that battling has to offer.