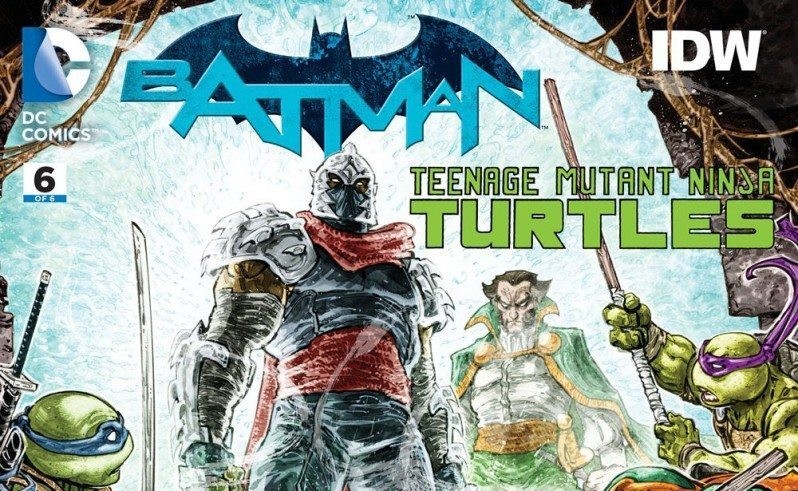 With Arkham’s genetically altered inmates loose in the asylum, Batman and Robin struggle to fight their way to the Shredder and Ra’s Al Ghul. Meanwhile, back in the bat cave, the Turtles have to make a tough decision: stay and aid Batman and Robin, or risk reverting to their normal selves and ultimately dying. The finale of the BATMAN/TMNT crossover comes to a close as our heroes make their final stand against a barrage of villains the likes of which they’ve never fought before.

READ: If you like IDW, then take a look at our review of BACK TO THE FUTURE: CITIZEN BROWN #1!

I was more than satisfied with this six-issue crossover event. We got to see a fight between Batman and the TMNT, watch the TMNT battle Batman villains, and witness Batman go toe-to-toe with classic TMNT villains. Having two different superhero franchises come together is the stuff that fans dream of. DC Comics and IDW Publishing have created a crossover event that will be remembered as one of the best in history. It’s rare these days for two different publishers to have their respective heroes engage with one another. It’s a shame it doesn’t happen more often, but that’s a conversation for another time. What I really enjoyed about this issue was how both Batman and the TMNT were able to work so well together. Even though they are so different from one another, they have one thing in common: a tendency to put aside their own problems to help those in need.

From a creative standpoint, I like what Tynion decided to do with each of the villains. He saw them exposed to the mutagen that made the turtles what they are. He made Mr. Freeze a polar bear, Bane an elephant, and Two-Face a baboon. The animals that each villain became reflected aspects of their actual behavior. It was just plain fun to see the villains portrayed in a novel way. It felt as if the wackiness that you get out of TMNT had rubbed off on Batman’s comic in this issue. 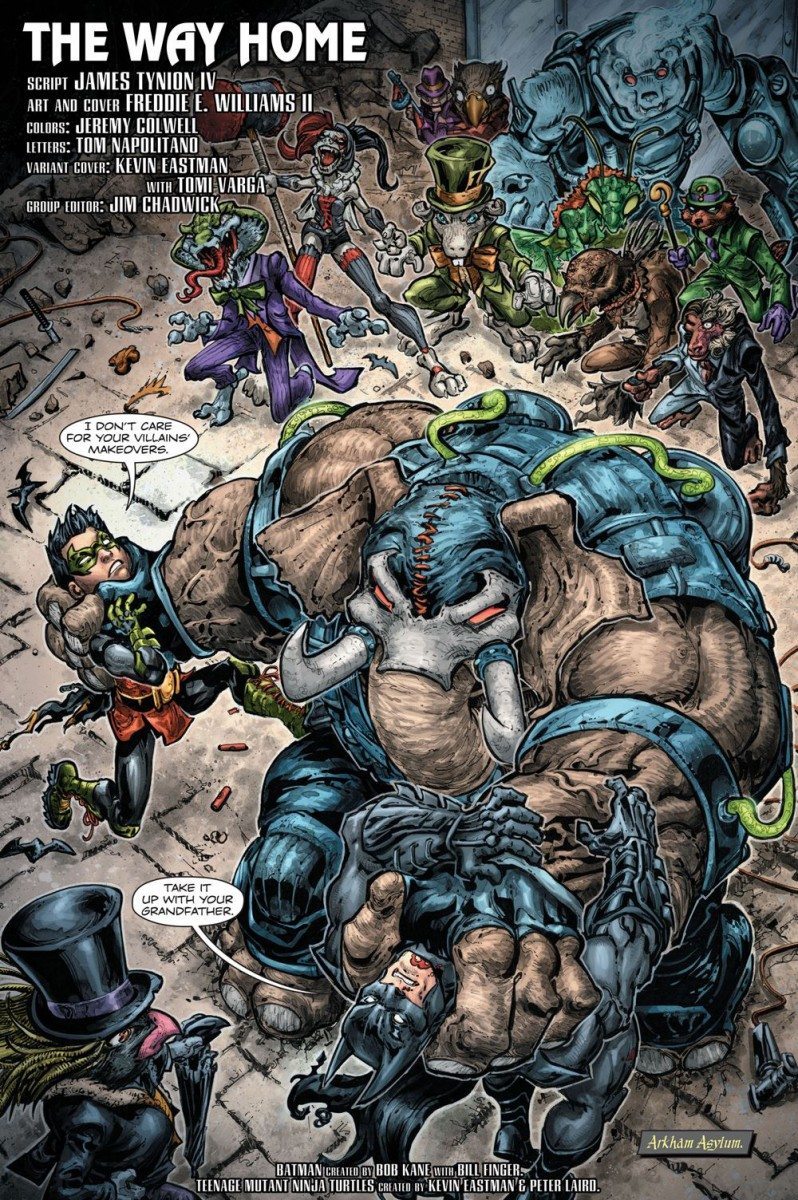 Writer James Tynion IV (known for THE WOODS, BATMAN AND ROBIN ETERNAL, and BATMAN) delivered a team-up extravaganza that I didn’t want to end. My fingers are crossed that we get a BATMAN/TMNT 2, and I hope that publishers do more team-ups like this.

Since Batman and the TMNT are both comics with darker undertones, Tynion did a great job by not over-saturating the comic with them. In fact, thanks to the comedic and nerdy turtles Michelangelo and Donatello, Tynion was able to use these characters to his advantage and make light of heavy situations.

Continuing the praise, his pacing of the issue was flawless. He manages to keep us in suspense for the right amount of time until he delivers the punch. Even though the goal of the series was to get the Turtles back to their own world before their time was up, the narrative didn’t feel rushed at all. He’s also able to give a well-thought-out explanation when needed and deliver dialogue that flows well.

WATCH: Like Batman? Then check out our interview with BATMAN writer Scott Snyder and artist Greg Capullo!

Artist Freddie Williams, known for JSA ALL-STARS, FIVE OF A KIND and THE DC COMICS GUIDE TO DIGITALLY DRAWING COMICS, brings it home in this finale with his rough and gritty fight scenes. His detailed drawings make the characters and their surroundings that much more realistic. I especially liked the fight scene between Batman and the Shredder, which showed 2o panels of the two fighting behind the main image of the two starting their battle. Colorist Jeremy Colwell, known for POWERPUFF GIRLS, EDWARD SCISSOR HANDS and GRIMM FAIRY TALES, gives the characters and their environment muted color tones that reflect Gotham’s darkness. 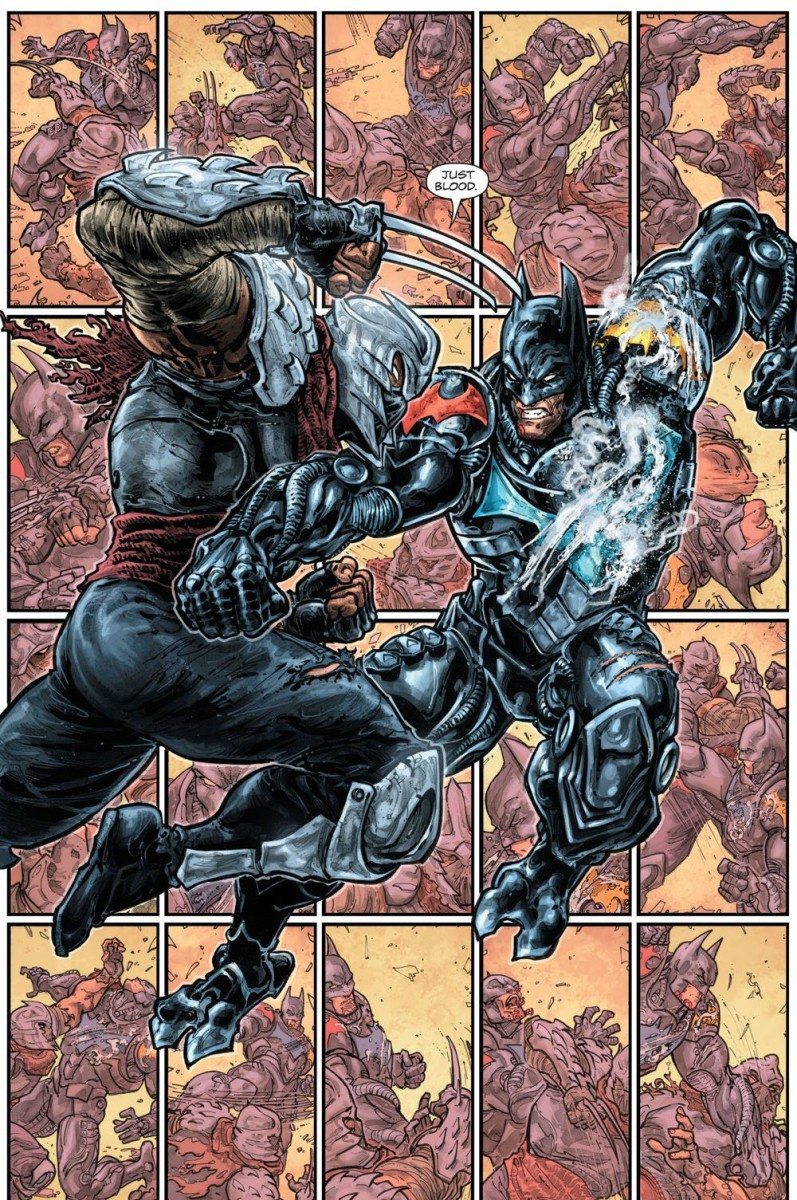 The TMNT have always stood for family and teamwork. Any time one of them tries to tackle a problem on their own, they wind up failing. The lesson of their stories is that no one has to tackle everything by themselves. That’s what family and friends are there for. Many seemingly impossible problems can be solved when we do it together, as demonstrated by the team-up with Batman and the Turtles. Batman, on the other hand, has always been about proving that we have no limits as long as we’re willing to go the extra mile. He teaches us that if we believe that we can make a difference, then we can. Even though he prefers to work alone, the situation that presented itself in this comic called for Batman to call on his allies. When united, Batman and the TMNT deliver a message about how different people can work together for the common good, which I believe is the theme of this story. If there’s anything you take away from this comic, I hope it’s that despite how different we all may seem, we’re not so different when we share the same ideals.