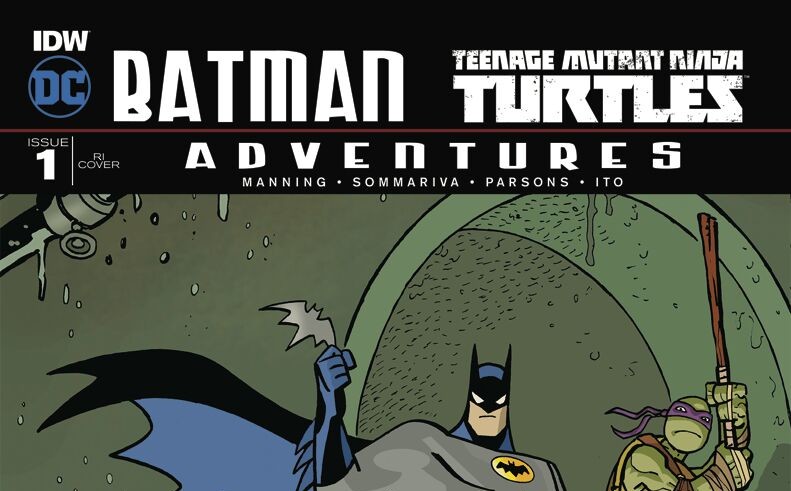 When two big franchises such as these crossover, the biggest fear is always that it’s just for the money. Of course, there’s some truth in that. You publish something hoping it’ll be popular and sell a lot of issues. When looking at this week’s BATMAN/TMNT ADVENTURES #1, I decided to view it through a different lens. I instead looked at it through the eyes of my eleven year old self. Watching my favorite Saturday morning cartoons finally coming together. When you are young playing with your action figures thinking, “Why can’t Batman hang out with the Turtles?” this series makes one of your childhood dreams come true.

In this issue, we are transported into the animated dimensions of these legendary superhero titles starring Batman from the Timmeverse aka Legendary Bruce Timm’s Batman and The Teenage Mutant Ninja Turtles from Nickelodeon’s newest cartoon incarnation. 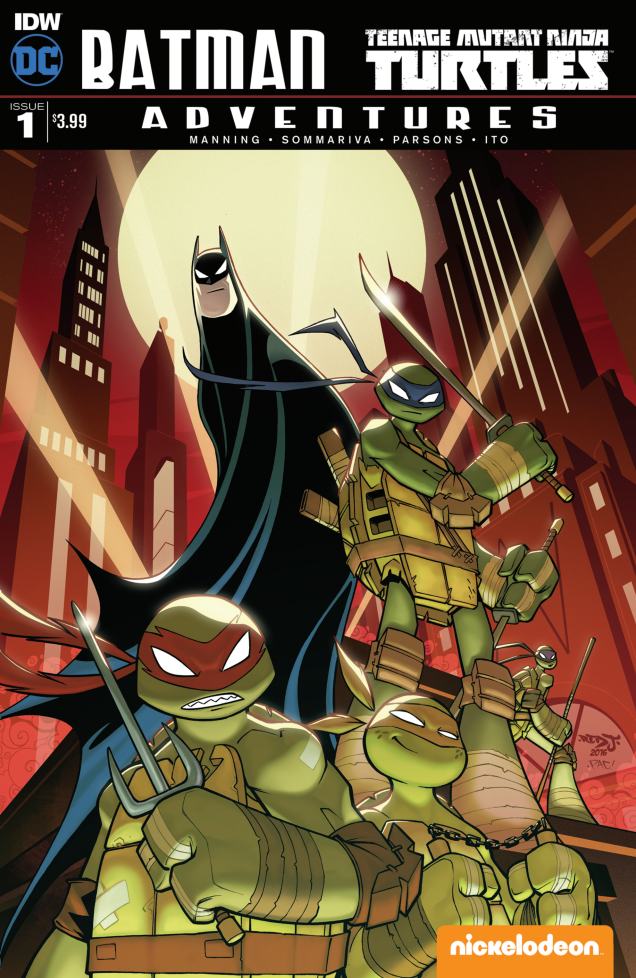 BATMAN/TMNT ADVENTURES #1 begins in Gotham, and it seems that Arkham’s inmates have been recently disappearing without a trace. When confronting a runaway Two-Face, who is speaking about “another world”. We soon find out that he may actually be talking about another reality. I really loved this scene in particular because of the mixed media bites floating in the air from a near by TV. Truly expressing Harvey’s split personality. Meanwhile, the turtles are dealing with what seems like another invasion from their alien foes, The Krang. As the brothers and April investigate a Krang portal in the sewers, none other than ClayFace attacks!

ClayFace is one of my favorite DC villains due to the fact that he is so powerful, with abilties that range from shapeshifting to clone creation. Unfortunately, ClayFace is often put on the back burner, but now young and old readers alike can see him take on four ninjas at once. The mystery thickens as Batman realizes the missing inmates have a triangle symbol on their wall, similar to the Krang’s portal.

READ: Want to learn more about their 1st team-up? Here’s our review of BATMAN/TMNT #6! 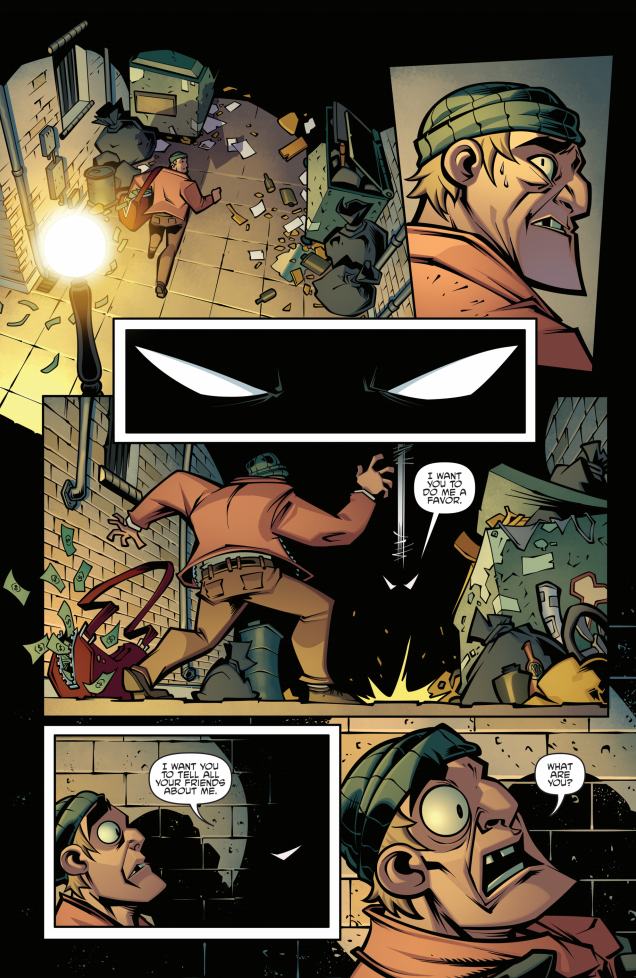 Mikey is one of the most perfect characters to have in any crossover, simply because he is a fanboy. We may see the TMNT as superheroes, but to them, they are just brothers trying to do good. So, like many of us, Mikey is usually geeking out or emulating comic book heroes, wanting the chance to be just like them. 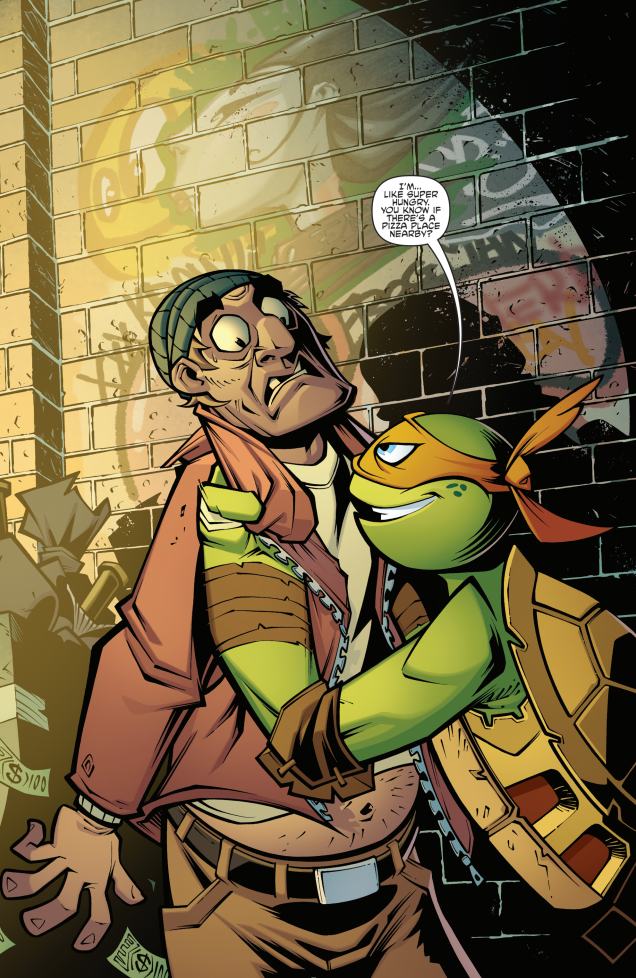 As a New Yorker, I was also pretty excited to see this opening in the back alleys of one of the boroughs. Having the possibility that this story will eventually bring the caped crusader to the streets of NYC has got me pumped!

The issue is not just about Batman coming to New York but Robin as well. The first comic I ever collected was Peter David’s and Todd Nauck’s YOUNG JUSTICE. The Robin, a.k.a. Tim Drake, I grew up with in that series was professional, but never got too serious. Always keeping the mood light like a sidekick should. With Bruce Timm’s Batman, this opens up the real possibility of a fun Robin. A Tim not chained to the darker worlds like New 52. With this story, Robin can become real buddy-buddy with the TMNT because they are teenagers just like him.

With the main stage for this series heading towards turtle territory, we will also get to see more of their rogues gallery. My only real disappointment with the last Batman Teenage Mutant Ninja Turtles crossover was the lack of Bebop and Rocksteady, but the TMNT have a wide variety of villains, and I believe even readers more into Batman will really enjoy the whole gang.

READ: Want learn more about these TMNT Rouges? Check out BEBOP AND ROCKSTEADY DESTROY EVERYTHING! #1 + 2 review!

There is no writer more perfect for this series than Matthew Manning (BATMAN CHARACTER ENCYCLOPEDIA ,TMNT AMAZING ADVENTURES). He is not only a veteran scribe for these worlds but has the comedic experience from titles like SCOOBY DOO WHERE ARE YOU? and LOONEY TUNES. He has a grasp on the Batman universe that not many writers do, and it shows through the easy back and forth between characters. Including a few quips from Wayne Manor butler, Alfred Pennyworth.

Jon Sommariva’s (TMNT AMAZING ADVENTURES, NOBLE CAUSES) depiction of the Nickelodeon TMNT, is exactly how the 2-D version would look. Jon’s artwork is the perfect blend of dynamic and cartoonish. Containing vivid color that truly animates each page, and these two creators just mesh so well together that I can’t wait for the next issue. BATMAN/TMNT ADVENTURES #1 is my favorite read this week. The first issue is well written, the artwork is great, and there is only more to come. Whether you are a New Yorker or a Gothamite, add this to your pull list today and feel like a kid again!