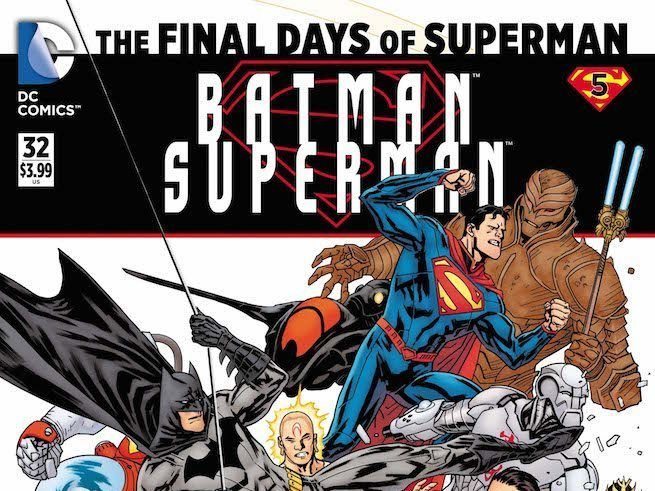 BATMAN/SUPERMAN #32 is part 5 of 8 in The Final Days of Superman story arc. Since I last covered BATMAN/SUPERMAN #31, writer Peter J. Tomasi has further developed this story detailing the final chapters of Superman’s life. This story suffers from some unnecessary action, but the positives of this comic continue to be the interactions between our heroes and the stellar artwork by Doug Mahnke.

READ: Need to catch up on this story? Check out our review of SUPERMAN/WONDER WOMAN #28

As previously mentioned, Batman brings Superman and Wonder Woman to China to see if they can find a connection between the Great Ten and the Golden Superman. Here is where our heroes begin fighting the Great Ten (should they call themselves that if there’s only seven of them?) and it just has to happen for the sake of the story. Whenever heroes go to another land, they are almost obligated to fight someone who will later gain their trust at the end of their brawl. Once the fight ends, the leader of the Great Ten agrees to take the Trinity to the Loess Plateau, Shanxi Province and to Dr. Omen. That name should ring a bell for some comic book fans who have been following this story. She was last seen in ACTION COMICS #51 where she acquired the blood of the Man of Steel! The Trinity suspect that Dr. Omen might be behind the Golden Superman, so they question her.

It turns out that they were partially right, Dr. Omen has created a Superman clone but it has been in its pod since it was created. Dr. Omen decides now would be a good time to release her Superman clone, you know, in front of the original Superman and his friends. The Great Ten tell the Trinity that this problem is theirs to deal with, so with this issue our heroes learn that the Golden Superman’s origin is not from China. This issue seemed to only prolong this story that has been hit and miss for me so far. For an arc that is supposed to be the final sendoff for New 52 Superman, aside from the excellent character representation and stellar artwork, the story has been dragging.

READ: Want more Superman but not sure where to start? Check out our SUPERMAN Essential Readings list

Speaking of the characters, Tomasi has been doing a fantastic job on the personalities of these heroes and their relationships with one another. This was seen in the previous BATMAN/SUPERMAN issue and Tomasi carries it on in this issue with the added bonus of Wonder Woman. Based on the dialogue with one another, the reader can see the comradery between them. It’s hard not to grin when you see these heroes behave as friends, especially since it makes them more relatable as characters. 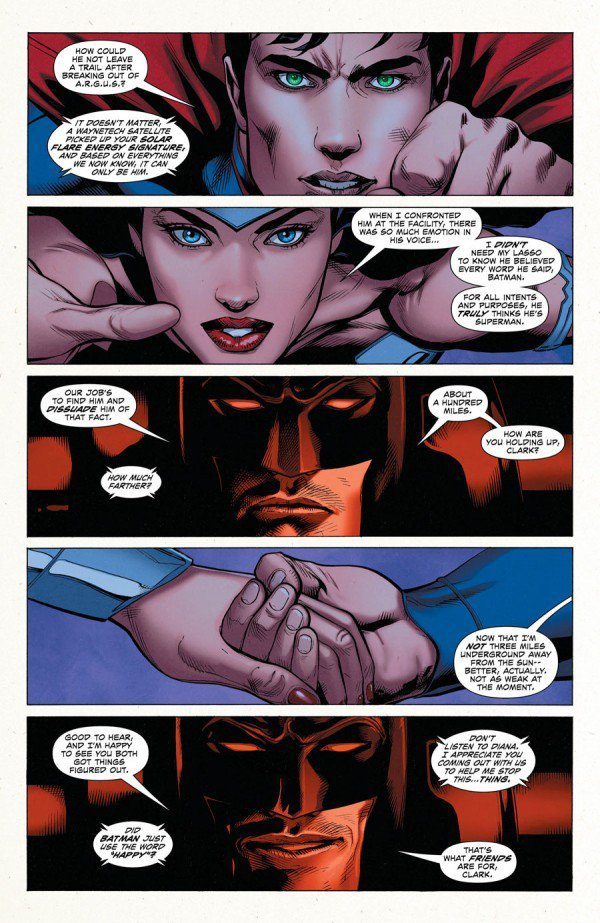 As for the supporting characters, they were functional. Dr. Omen seemed like she had a larger role in this story based on the secretive nature of her appearance in ACTION COMICS #51. It’s actually a little disappointing to see that she had little to do with the Golden Superman. The Great Ten were just there to fight our heroes for a few pages before helping them out. There is not much more I can say about them as characters, except that they were there to serve a purpose and did it. However, from an artistic standpoint, they looked phenomenal. 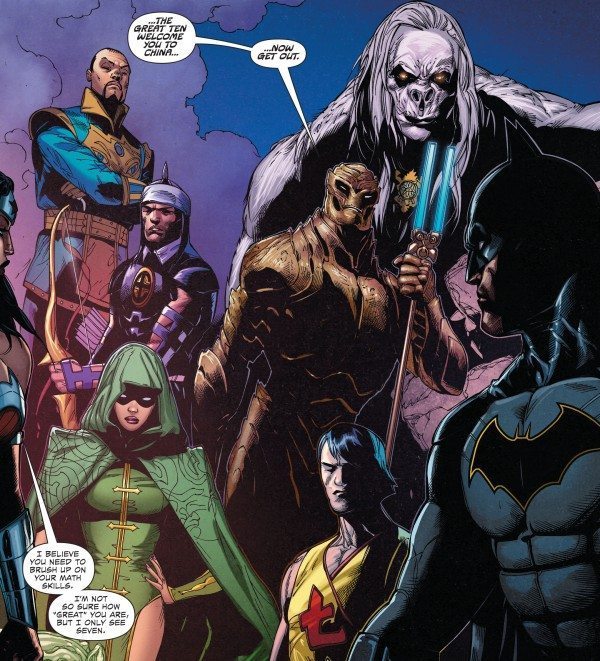 The designs of the Great Ten are nothing short of amazing! The way artist Doug Mahnke illustrated these characters makes each of them look diverse and unique from one another. This makes sense since the Great Ten is essentially the Justice League of China. I must also compliment him on the action sequences. I realize I complained about how they were unnecessary, but that doesn’t mean they weren’t entertaining to look at. Mahnke managed to juggle three heroes fighting at once against several opponents. Each fight was happening simultaneously, so while watching Batman fight in one panel, Superman could be seen in the background fighting, setting up the panel to follow. Additionally, the dark red hue during Superman’s interrogation sequence added an ominous feel to the scene.

In the end, the issue seems to just exist to continue to build up the mystery of the Golden Superman while not providing any real answers. I understand that this story has three more parts, but Tomasi really needs to pick up the pace. Superman fans will read it but casual fans will lose interest if they haven’t already. If you’re a fan of New 52 Superman, then I recommend you check out this send-off story.