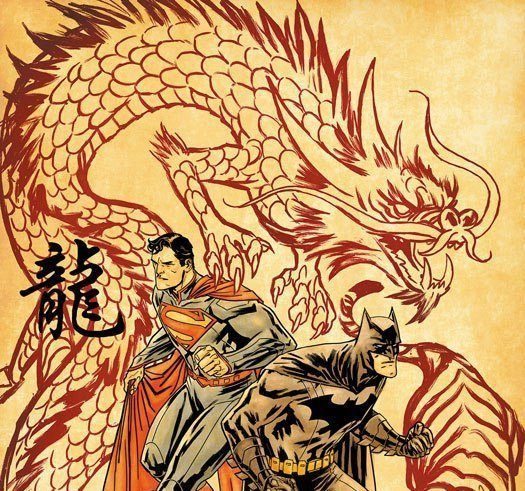 Writer Peter J. Tomasi continues his eight part SUPER LEAGUE story that started with SUPERMAN #51. In this issue, Superman travels to Gotham to seek Batman’s assistance in locating Supergirl. That is the main storyline in this issue, but Tomasi manages to juggle several different plot lines together while not making his readers feel overwhelmed. This issue does an impressive job at continuing the momentum started in the previous week.This includes everything from the friendship of Batman and Superman to the mysterious Golden Superman and the impending danger looming in the distance.

READ: Catch up on THE FINAL DAYS OF SUPERMAN by reading Part 1 in SUPERMAN #51

As previously mentioned, Superman travels to Gotham in hopes that Batman will be able to locate Supergirl. Meanwhile, back in Metropolis, the Golden Superman saves a family from a burning building. An interesting development occurs when the Golden Superman suddenly changes into a regular human being while flying towards a young boy on the roof of a building. When the man awakens, we find out that he has no recollection of being Superman. The man then pushes the young boy off the roof out of frustration for annoying him! Instantly, he transforms back into Golden Superman and saves the boy before he hits the floor. Meanwhile, Batman discloses to Superman what information he currently has on Supergirl’s location. 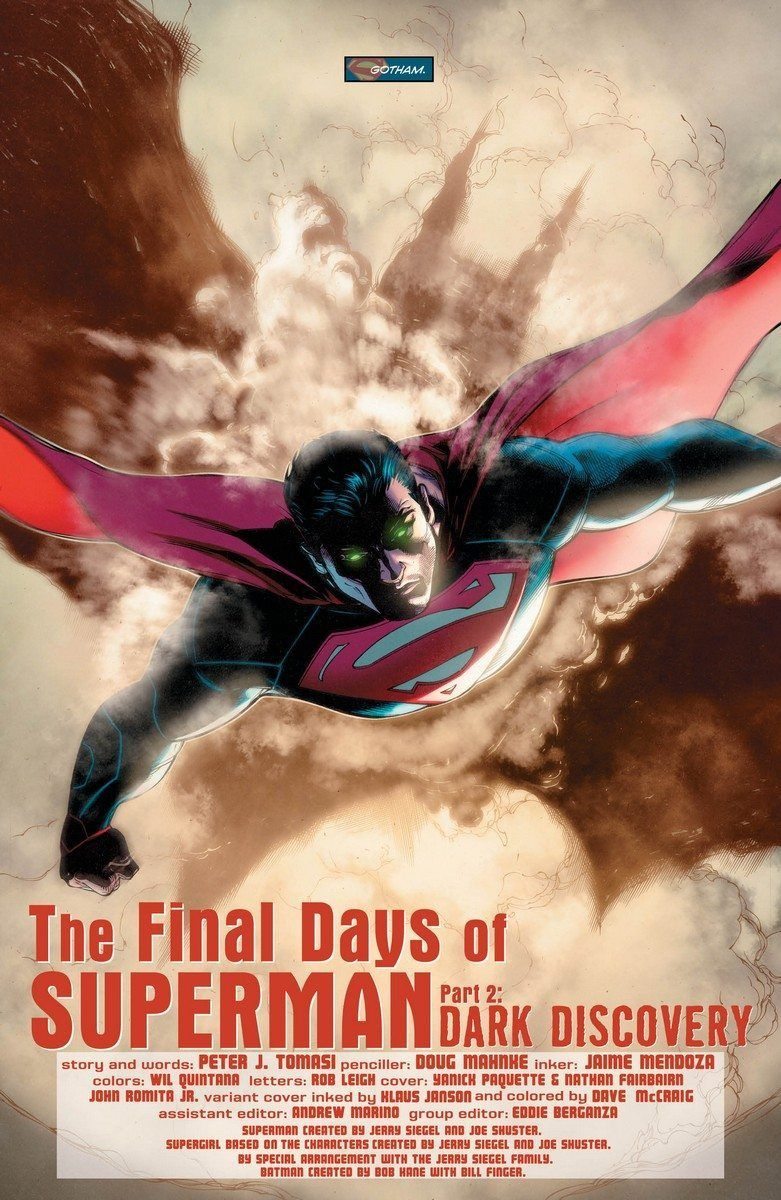 It doesn’t take long for Batman to gather some leads. He brings Superman to the last sighting of Supergirl, a café in New York City. Batman explains that Supergirl was living under the radar as a barista until she left. Batman tells Superman that all his leads point to National City. Before deciding to go to National City, the two heroes are attacked by the Four Pillars, who are the embodiement of the Chinese zodiac. Our heroes engage in a battle and Superman, in his weakened state, is injured by one of the Four Pillars. Before Superman can chase after them, they escape using teleportation. Superman realizes that he is getting weaker at a much faster rate than he anticipated and he is more determined to find Supergirl before it’s too late.

READ: Check out latest article on the SUPERGIRL show

In this issue, we see more of that Batman and Superman’s friendship, which is always a plus when it is handled well. Thankfully Tomasi seems to have a good grasp on the relationship of the characters to display it convincingly. Superman is always associated as being this invincible and unstoppable force for good. However, in this issue he shown to be weaker and vulnerable, all adding on to the shift of Superman’s personality of accepting his fate. Superman’s personality shift is depressing for not only the reader, but most of all for Batman. Their relationship usually has Superman being the one who always has hope that there will be a brighter tomorrow, so it is a bit disheartening for Batman to see his friend just accept his death.

Watching Batman frustrated in this situation is heartbreaking because readers know that he is familiar with loss and he hates the idea that there is nothing he can do to prevent his friend’s death. The death of Bruce’s parents was the last time Bruce ever felt helpless in protecting loved ones, so here once again he is reminded of that feeling as he can only watch his friend slowly die. Artist Doug Mahnke illustrates the emotion behind Batman by showing close ups to the character’s eyes and conveying his feeling of helplessness. After Batman sits down in front of his computer when Superman leaves, Mahnke has two nearly identical comic book panels side by side. In the second panel we see Batman destroying his laptop, followed by Alfred looking at Batman with a look of sorrow. Mahnke managed to show the characters’ inner thoughts without having them say a word, because sometimes having characters say nothing provides a stronger message. 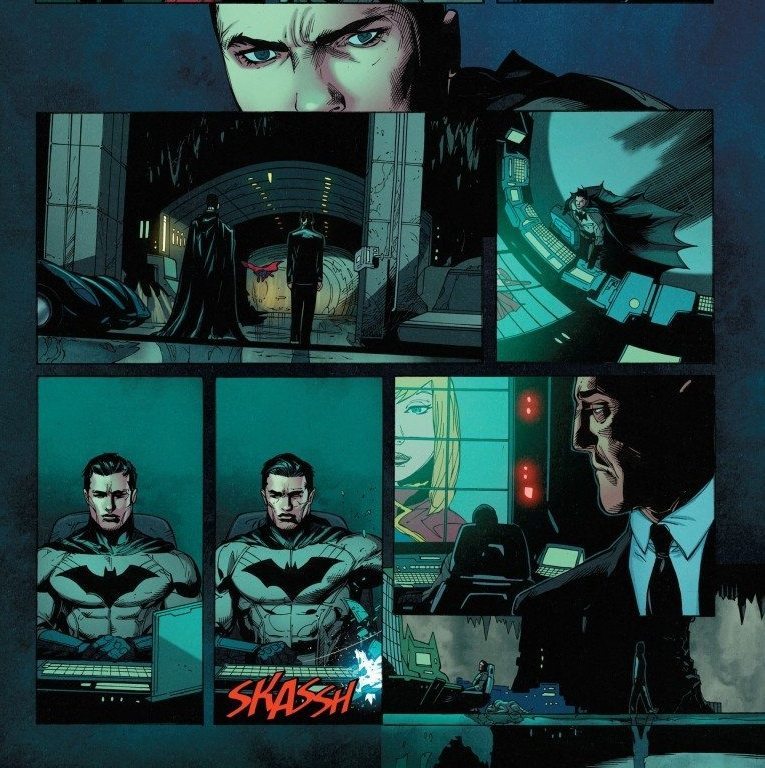 On a less somber note , Tomasi provides more information on the Golden Superman. There is a type of yin-yang duality to this character – when he is Golden Superman he the upstanding and respectful superhero, but as a human he is an easily irritable individual who pushes a child off a building for scolding him! It’s fascinating to see the contrast between this horrible human being to his superhero counterpart that he apparently has no control over. Another intriguing bit of information that gets introduced in this issue is when the boy was suddenly put in danger, Golden Superman took over. It’s possible that Golden Superman only appears whenever someone needs to be saved. As the story unfolds I look forward to learning more about this Golden Superman, his alter ego, and why this man, of all people, was chosen to be Superman.

I need to once again compliment artist Mahnke on his subtly when it comes to his drawing of Golden Superman. Here we see what this individual looks like when he is not golden. Mahnke drew a character who is not drastically different from Superman, but upon closer inspection the differences are there. For example, his face appears to be less defined as when compared to his Golden Superman form. 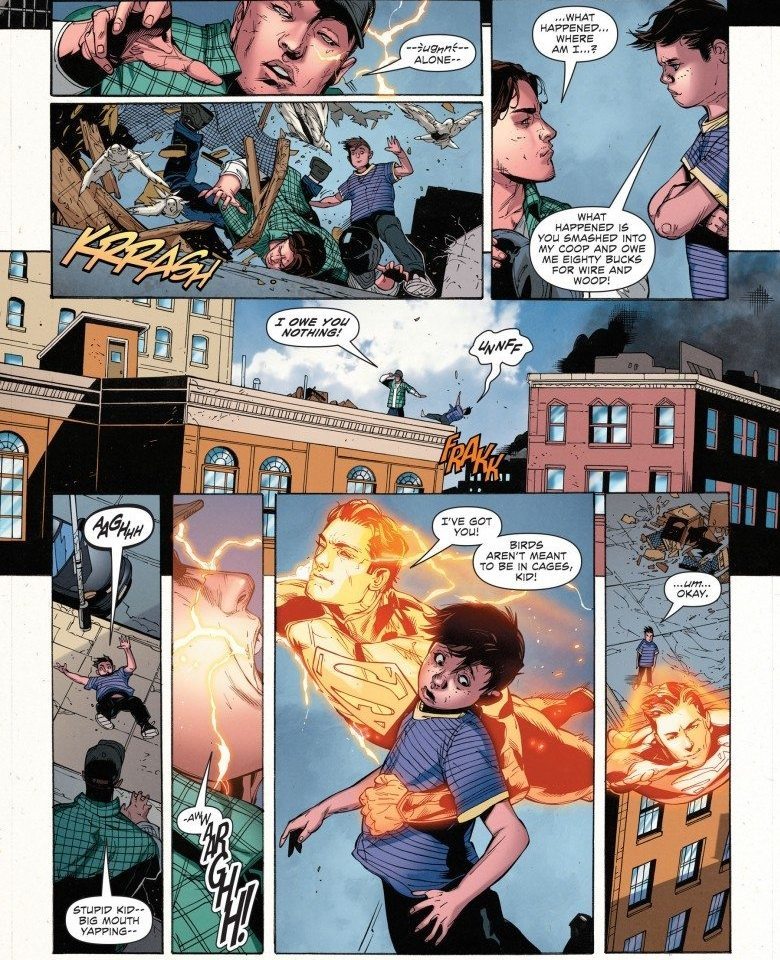 As for the action scenes, Mahnke is extremely skilled at demonstrating multiple fights with our two heroes. In each panel, no matter which hero the focus is on, readers can see what the other hero is doing the background, setting up the next panel. As for the backdrop of cities featured in this issue, Mahnke shows the stark differences in the background color. In Gotham, the color scheme has a dark red and purple hue to it, whereas in Metropolis it is bright blue.  This actually blends quite nicely with the yellow glow of Golden Superman. As always, each city represents each character’s personality. The fact that we didn’t see new 52 Superman in Metropolis in this issue really drives home that fact that Superman is not behaving with his usual hopeful attitude; he’s darker now that he’s not resisting death.

So far I’m really enjoying Tomasi’s final run of the new 52 Superman before DC’s Rebirth. I recommend this issue and this entire arc for anyone who is a new 52 Superman fan, or a just a fan of Superman in general. Mahnke provides some fantastic artwork in both the emotions of the characters and the action sequences. Tomasi is laying groundwork for a very entertaining story, which has plenty of mystery that promises to lead to something bigger.