In a previous interview, Tom King stated that the “I am Bane” storyline will feature the “greatest battle in the history of Batman”. While this claim proves to be exaggerated for the final confrontation, BATMAN #20 is nonetheless a deeper analysis on what makes Batman… well, Batman. Alongside David Finch’s captivating art, this last issue of the “I am Bane” storyline has an intriguing monologue between Bruce and his deceased mother.

After punching his way through the inmates of Arkham Asylum in the previous issue, Bane once again faces the Bat. The first page of BATMAN #20 doesn’t waste a moment to draw first blood, as the two characters go head on. The various pages throughout the issue have the two rivals exchanging fatal blows. Batman appears to have suffered the most as he’s punched, kicked, and tossed by Bane’s wrath. As the brutal showdown takes place, we’re left with the narration of Martha Wayne — an imaginary voice in Bruce’s head.

READ: Bane enters the Asylum in the previous issue to kick some serious ass. Find out more with our review of BATMAN #19!

In this narrative, Martha “WHY DID YOU SAY THAT NAME?!” Wayne tells Bruce why he had to go to such lengths to save Gotham Girl. She explains the hardship and challenges Bruce had to partake in, just so he can save an individual that can protect Gotham after he’s gone. Martha’s voice is cleverly disguised as a reminder of everything that has happened so far in King’s run. Her words give away to flashbacks and highlights from the “I am Gotham” and “I am Suicide” storylines. It’s not too far-fetched to understand why Bruce would have some sort of vision that includes his deceased mother, after all, King establishes their tragic attachment in BATMAN #18. Since Alfred is the closest thing to a father for the Dark Knight, Bruce still lacks affection from a strong motherly figure. So yes, it’s understandable that Bruce would fixate on conversations with his dead mum. It’s how the character deals with loss and, through this inner monologue between Bruce and his mother, we learn that his actions throughout King’s run doesn’t reflect what the previous arcs implied. It’s not about a proud death or suicidal tendencies, rather it’s a much simpler motive that solidifies Batman as a hero we all know and love. 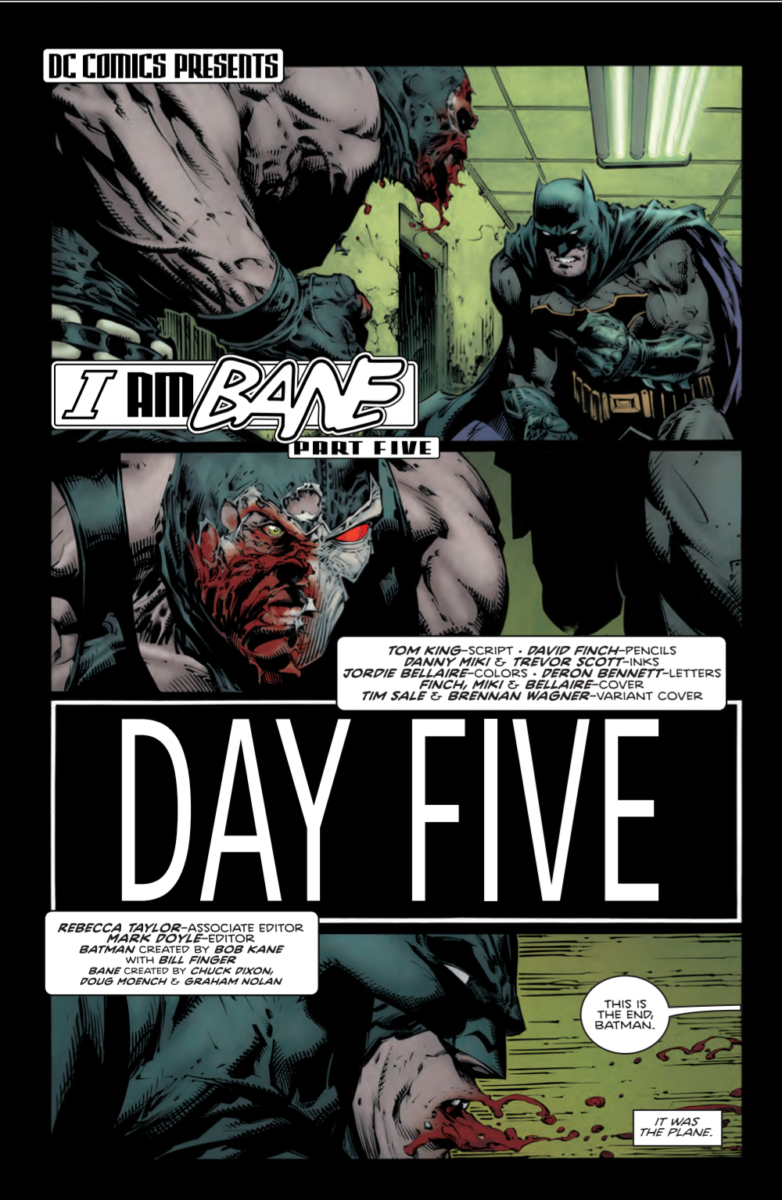 While this is more of a Batman-focused issue, Bane’s portrayal, unfortunately, leaves more to be desired. The character’s physical presence and brute strength explode off the pages, but all that character development from the previous issues feels wasted here. Bane just continues to rant on why he shouldn’t be trifled with and counters with generic threats. Batman even comments on how many times he has heard those familiar threats, as it proves to be irrelevant because he always prevails. In King’s vision, Bane and the Bat had a similar tragic origin. Bane needs Psycho Pirate to escape all his pain, he even intended to cause no harm, as the real culprit here is Dr. Hugo Strange… wherever he is. Sure, it would’ve made for a boring tale to see Bane and the Bat just talk it out. But King could’ve further distinguished Bane with meaningful dialogue, rather than displaying the same old temper. As for the main brawl, let’s just say we don’t truly see Bane at his venom-fueled best.

READ: Find out how Superman resonates with the heart of the immigrant journey with this character analysis article!

David Finch’s art in BATMAN #20 proves to be at its best. From various panel sizes to full page splash, Finch’s portrayal of the two larger than life figures going at it is enthralling. Alongside the blood and grit, Finch’s use of the classic nine-panel-grid on two separate pages elevates the action and storytelling. From the page below, notice how impressively Finch scales the fighting on the left side, as the last column of the panels shows Batman’s tragic origin. In one page, we have two different stories that reflect Batman’s current physical pain and the emotional, everlasting pain of losing his parents. The colors of Jordie Bellaire help ignite the tragedy, as the bottom panels immediately grab your attention with the flash of gunfire. Alongside the dim and dark color choices, Bellaire’s colors also help differentiate the scenes and moments. The main brawl between Batman and Bane possesses a green-lit background, while flashbacks from the “I am Suicide” storyline echoes artist Mikel Janin’s mesmerizing orange hue. This makes the issue feel like a tribute to King’s Batman run so far, encapsulating the wild journey. 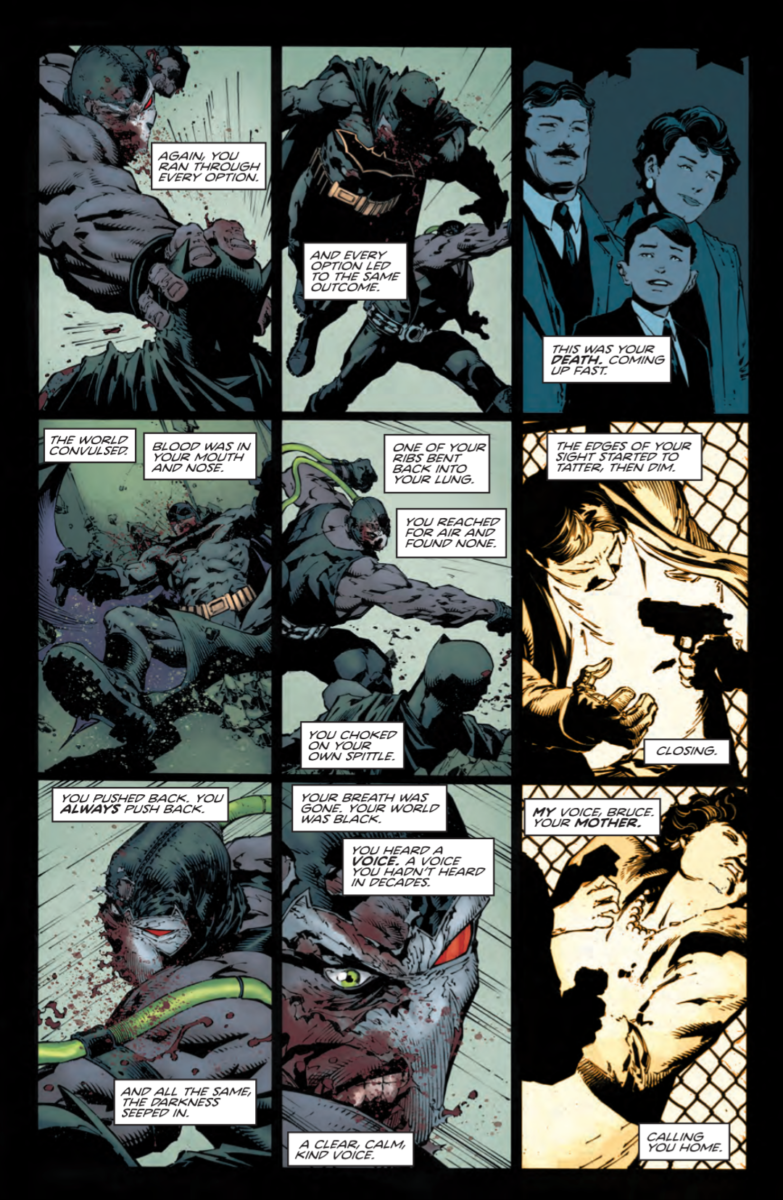 Although BATMAN #20 falls short on the “greatest Batman battle” title, it’s nonetheless a great examination of the titular character. Alongside the art, the last issue of the “I am Bane” storyline delivers heavy punches and kicks with the famous rivalry between Bane and Batman. While the fighting is quite brutal and entertaining, it’s Batman’s character and the inner conversation between Bruce and his mother that serve as high points for the issue.