After a dynamite run, BATMAN/THE SHADOW has finally reached its end. From writers, Scott Snyder and Steve Orlando, comes a thrilling finale that unites two protagonists from different universes. Throughout the series, Batman and the Shadow have struggled to find common ground in regards to their perception of the value of human life. Fortunately, in BATMAN/THE SHADOW #6, our titular characters manage to put aside their differences for good and overcome the evil legacy of the Stag.

Through a solid depiction of the issue’s characters as well as colorful, immersive panels, BATMAN/THE SHADOW #6 is a satisfying conclusion, even if the climax may slightly falter. 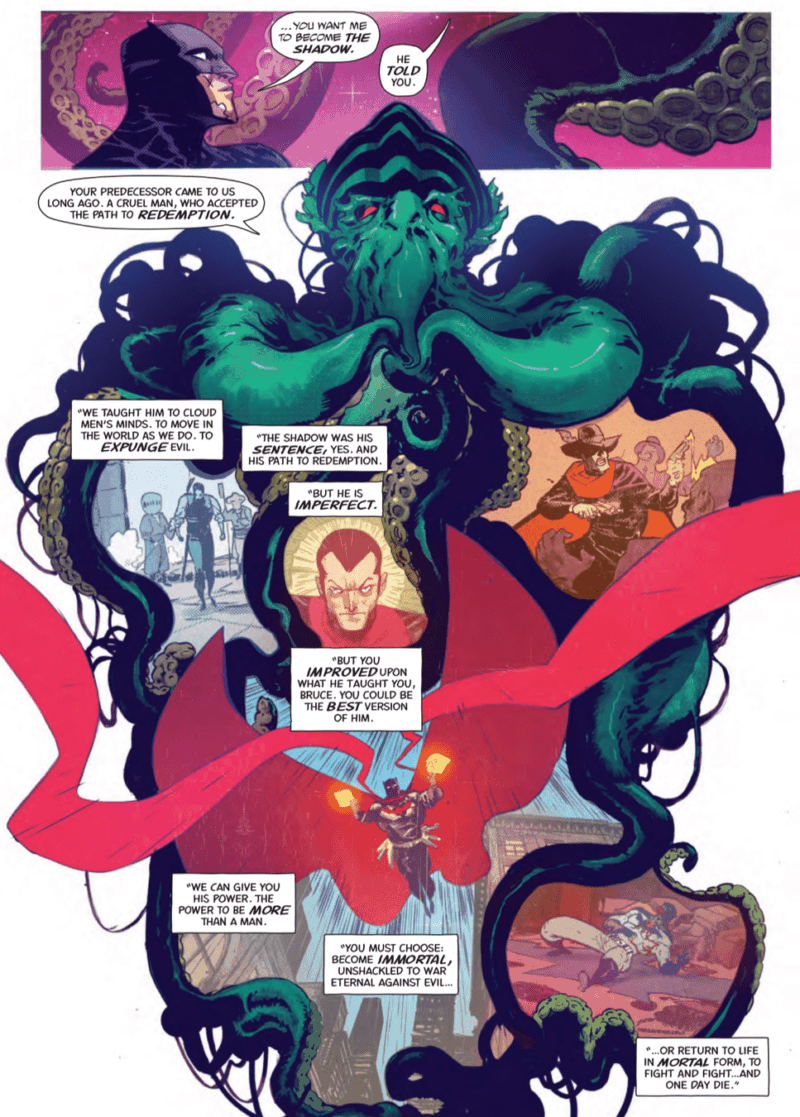 BATMAN/THE SHADOW #6 portrays the long-awaited confrontation between the titular characters and The Stag. Just like in previous issues, the Joker continues to ally himself with the Stag. Despite this, his presence in this installment is ultimately unmemorable. This leaves us wondering if there was an overall purpose for his inclusion in the series if his role was so minimal. Unfortunately, we have no way of knowing since this is the final issue.

Besides this though, this installment excels in its characterization of the main characters. In one sequence, Batman is offered the chance to maintain immortality by taking up the mantle of the Shadow. He refuses, stating that someone else must take up the cowl of the Batman after Bruce Wayne dies. Batman also stipulates that the person who follows in his footsteps must improve upon his own legacy. This assertion on his part signifies his humility. Despite being a notable vigilante, Batman still believes he can improve himself.

A Choice of Legacy

Perhaps the most poignant moment of BATMAN/THE SHADOW #6 is the final discussion between the two primary characters. Throughout the series, the Shadow attempts to prove to Batman that all his knowledge of crime-fighting derives from the Shadow himself. Interestingly, upon the conclusion of this issue, the roles reverse. In the final pages of the issue, the Shadow expresses his belief that his life has been cursed. Because of this, he no longer believes that he has a chance at redemption. Batman counters this perception. He states that the Shadow is capable of finding a greater purpose in his life, but he can only do so if he’s willing to give himself the chance to find said purpose.

Overall, the finale of BATMAN/THE SHADOW is incredibly satisfying. However, the climactic fight sequence occurs way too abruptly. Despite this, the emphasis on Batman and the Shadow’s character motivations proves to be the highlight of the piece. It allows readers to further empathize and identify with these iconic figures. 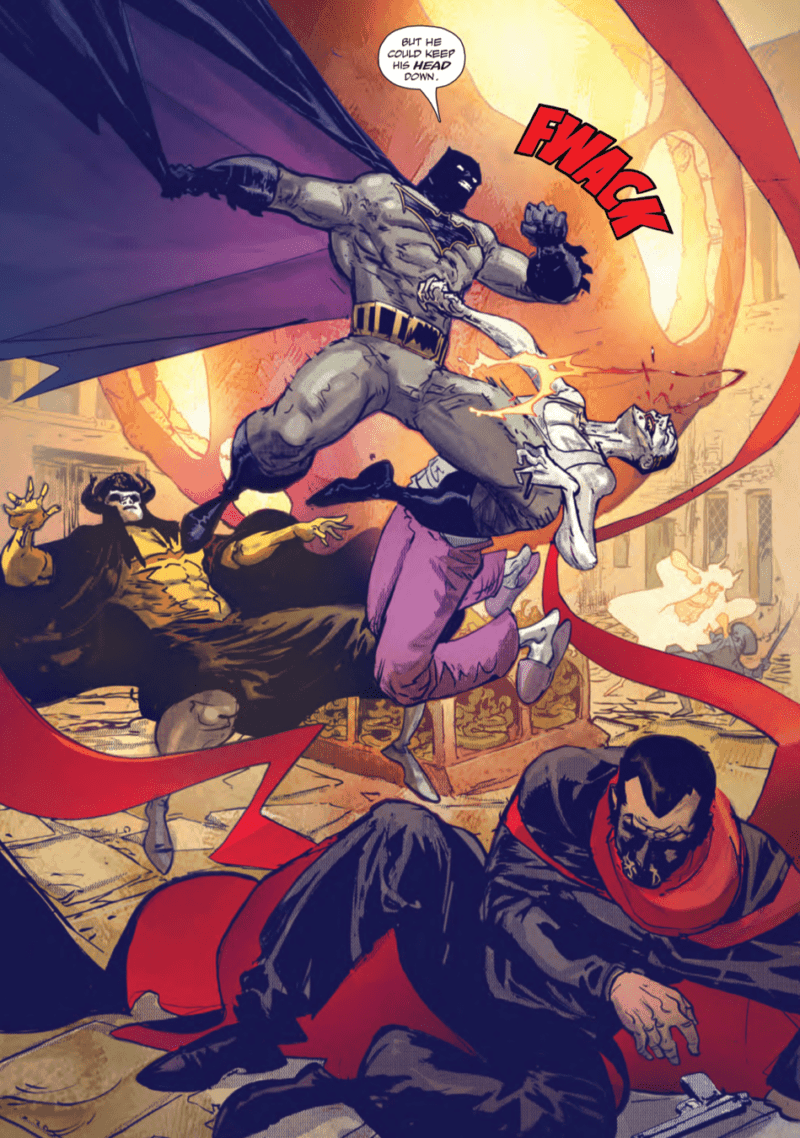 The Many Hues of BATMAN THE SHADOW #6

Once again, Riley Rossmo hits it out of the park with some amazing illustrations. From the random organization of the panels to the intricate depictions of characters and setting, Rossmo establishes an engaging world for the titular characters to live in. There is a lovely balance between chaos and tranquility in this issue. This balance parallels Batman and the Shadow’s personal conflicts in identifying their personal faults.

With this, the series has successfully maintained a consistently colorful palette, an element that’s often absent from Batman comics. Though that aspect might be unfamiliar to readers, it’s certainly refreshing and it augments the dynamic nature of the series as a whole.

READ: Speaking of other worlds, take a look our review for BATMAN: THE RED DEATH #1 right here!

The action sequences of this issue are beautifully executed. Yet, the final panels that depict the last conversation between Batman and the Shadow are perhaps the most notable of the issue. In this specific sequence, colorist Ivan Plascencia changes the tone from that of the previous pages. In this conversation, regarding the respective purposes that each of the two primary characters lives by, we’re no longer engaged in the vibrant nature of battle. Instead, we experience a more solemn mood. The palette and illustrations that the artists depicted in the sequence pull us into understanding these guarded, yet vulnerable, characters. 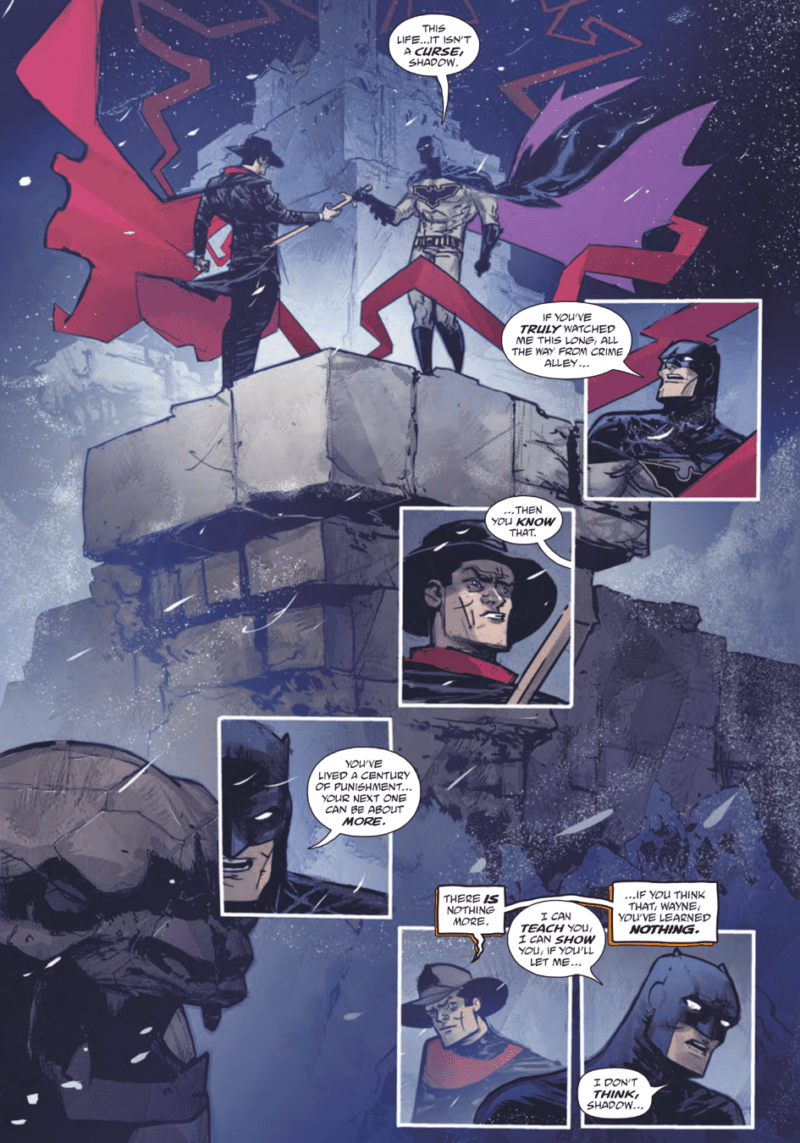 Though the series was brief, BATMAN/THE SHADOW established a memorable crossover experience. Through the collaboration of writers and artists, the series excelled in both its narrative and imagery. The team dynamic of the titular characters got us wondering why it took so long to get those two to interact in the first place. Sure, they maintain contrasting beliefs and exact justice in different manners. Still, they share a mutual belief in their obligation to protect humanity.

So, despite the fact that Batman and the Shadow come from different worlds, their time together has proven that their personal journeys haven’t been so different after all.