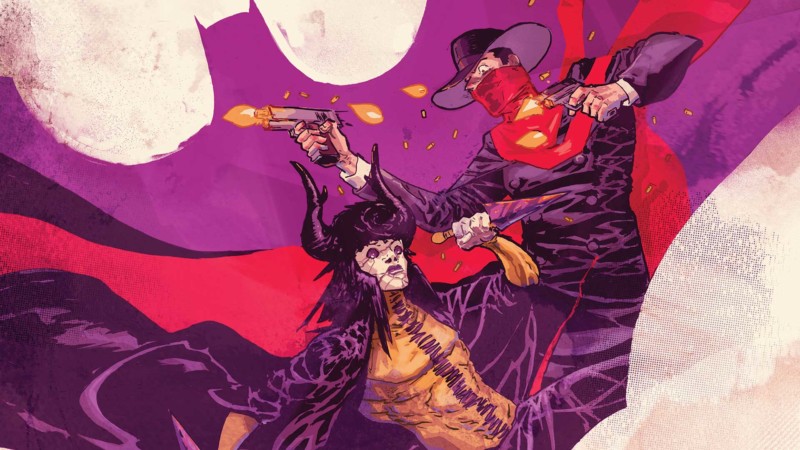 BATMAN/THE SHADOW #2 further explores the surreal meeting between the darkest heroes of DC and Dynamite Comics. The last issue focused on Batman’s investigation into a mysterious murder he eventually linked to the Shadow. Where in issue #1 the elements of the supernatural lurked in the shadows (pun intended), issue #2 brings them out in full force, plunging Batman into a world he knows nothing about. The Shadow comes out of the darkness, leaking the supernatural powers of his world into Gotham. The resulting tale pushes suspense, with a tone that reads more like SPAWN or HELLBOY than BATMAN, teasing the realm of horror and embracing the demonic. 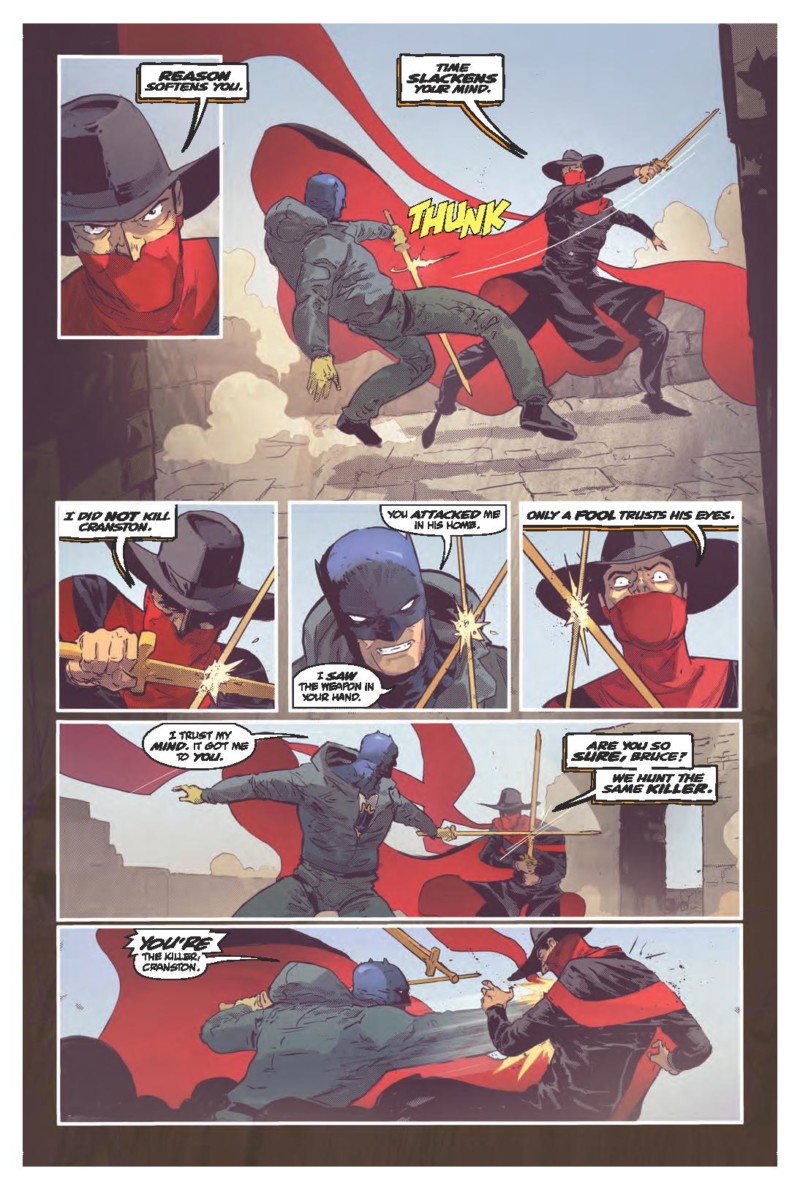 After a brief duel with Batman, the Shadow reveals a bit of his history in the opening pages of BATMAN/ THE SHADOW #2. He describes his former life as a human butcher with nonchalance, detailing the hundreds of people he murdered. Those deaths eventually pushed him to atone by becoming the Shadow, a murderous force that could jump from body to body, taking out his bloodlust on the vilest forms of humanity.

Batman doesn’t buy it and wants the Shadow to pay for the murder of Lamont Cranston’s (one of the Shadow’s original faces) descendant. Yet the Shadow warns Batman that the real murderer is a being of pure evil known as the Stag who, unlike the Shadow, racked up the body count by slaughtering the best of humanity. Batman realizes that Shadow might be right when he discovers that Dr. Leslie Thompkins is going to be Stag’s next victim. Batman meets the Stag head-to-head in an unsettling confrontation, which forces the Dark Knight to realize that the rules of the mortal world might not apply to this fearsome beast.

READ: The mystery of Lamont Cranston’s murder began in BATMAN/THE SHADOW #1! Take a look at our review here!

The insurgence of supernatural threats into Batman’s world presents a fascinating departure from the detective’s usual dealings. Writer Scott Snyder has always been adept at tackling Batman’s psyche from different angles. Here, Batman’s stubbornness comes across most clearly, his adamant refusal to admit that the threats from the Shadow’s world are beyond his understanding. Snyder has previously tackled Batman’s arrogance getting the better of him, particularly in “The Court of Owls” saga. Here it happens again, with Batman attempting to take out the Stag with his usual methods, despite Shadow’s warning that the Stag is an all-powerful being.

It’s really interesting how Batman views things he doesn’t understand with extreme hostility. Despite the Shadow’s explanation of his and Stag’s origins making logical sense, Batman absolutely refuses to view Shadow as an ally, instead attempting to beat him into submission every time they cross paths. Batman isn’t usually one to prejudge, but the Shadow’s supernatural origin defies Batman’s belief system, much like the Court of Owls did long ago.

I’m impressed with Snyder’s ability to reinvent himself (along with Steve Orlando’s), with this crossover feeling unlike anything Snyder has written before. The Shadow’s presence allows the comic to juggle between equal parts crime noir and supernatural horror, again, feeling more like a Todd McFarlane or Mike Mignola comic. “I am an Honest Signal,” is the Stag’s apparent mantra. Ironic, considering just how strange and unnerving his appearance is.

The Stag looks totally out of place in a BATMAN comic. He made a brief appearance back in the BATMAN ANNUAL, cleverly setting up this crossover. His appearance there was just as off-putting as it is here. With his Faun’s hooves, deathly white face, jet black horns and soulless silver eyes, Stag looks exactly like a creature straight out of the mind of Guillermo Del Toro. If this crossover somehow became a movie, I know exactly who I’d want directing it.

In BATMAN/THE SHADOW #2, the Shadow and Batman generally match up stylistically. In some ways, I’m amazed it took this long for a proper crossover. Their respective histories run parallel courses. Both Batman and Shadow were the subjects of 1930s comic books, radio shows, television serials, and movies. They both had crappy films made in the mid-90s too (Alec Baldwin once played a live-action version of the Shadow, if you can believe it). The Shadow has been cited as a direct influence on Bill Finger for the creation of Batman, and that contributes to the sense of nostalgia in seeing the two of them together. Shadow, with his red cape, mask, and wide-brimmed black hat, immediately comes off as a vigilante from another era. Seeing the Shadow in Batman’s world really makes it feel like you’re reading a classic 1930s comic book. 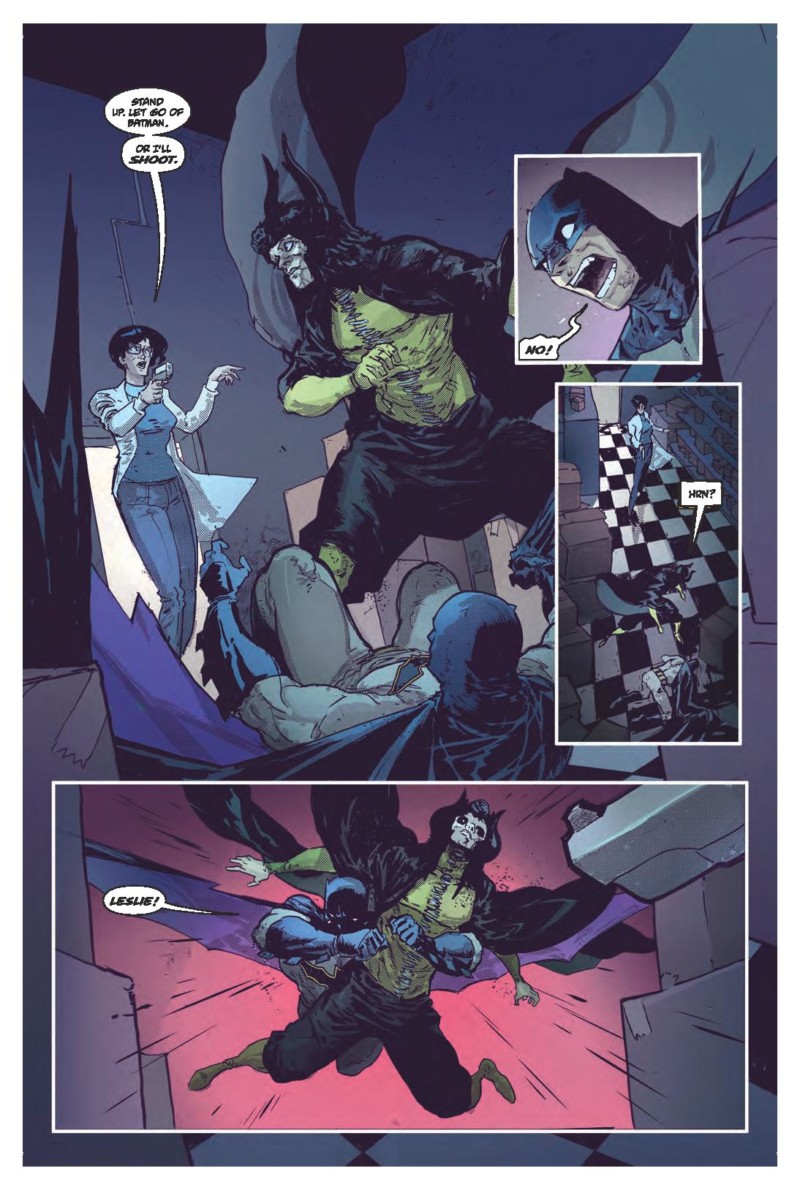 Despite the many positives, the comic is missing any distinctive characterization for the Shadow. He’s coldly detached, likes to taunt Batman a lot, and laughs about the Dark Knight’s insolence. The Shadow reads a bit like a caricature as a result, particularly with all those “HAHAHAHAHAHAs” drawn in the background. He simply doesn’t read with the same level of distinction and nuance as Batman. This makes sense, considering Snyder and Orlando are both more familiar with Batman than Shadow, but it definitely feels like the writers are favoring Batman over Shadow. We’re only two issues in though so hopefully, as Batman moves further and further into Shadow’s world, we’ll learn much more about who the mysterious vigilante is beyond the laughter and many faces.

A Taste of Noir

Riley Rossmo’s artwork expertly navigates both Batman and the Shadow’s worlds. Batman and his environment are dark, gritty, and grounded, while Shadow’s world comes with a bevy of artistic surrealism. Shadow’s red cape wraps around him like a living thing, sometimes stretching out to envelope Batman along with the smoke. The Stag, once again, looks like he was sent straight from the underworld, with the hooves, the horns, the eyes, and one particularly striking detail that’s easy to miss: Stag’s chest is stitched shut, as though he’s a Frankenstein of the spirit world, pieced together from all the souls he’s stolen.

Rossmo’s style overall is very golden age noir, visually closer to a 1930s detective comic than the modern DC comics. His art appears purposefully rough around the edges, as though the inker didn’t quite have enough time to finish. This style helps to create a striking overlap between Batman and Shadow’s worlds, as though the edges of their realities aren’t totally defined. There’s just enough space for the shadows to slip through.

READ: Batman just solved another classic noir murder mystery with Swamp Thing. Find out all about it in our review of BATMAN #23!

Overall, BATMAN/THE SHADOW #2 deepens the mysteries of the first issue and introduces thrilling supernatural elements that ramp up the conflict. It’s a visually unsettling comic, thanks to the appearance of the Stag. The issue’s final pages introduce a surprise character who’s evil just might rival the Stag’s, creating plenty of excitement and suggesting that even more horrors lie ahead. Batman and the Shadow are kindred spirits, and their team-up makes for a perfect comic book crossover. That’s an honest signal.