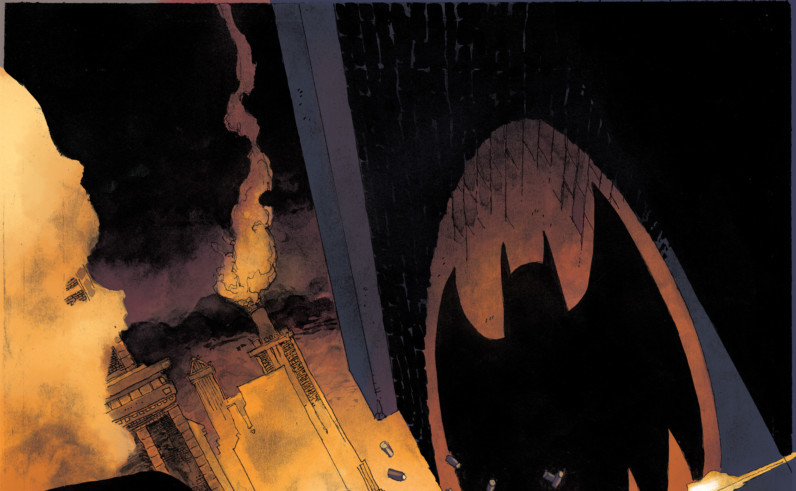 Vigilantes Batman and The Shadow, Together at Last!

The 1930s brought pulp comics, and one that has inspired all dark heroes since was THE SHADOW. Created in 1930 by Walter B. Gibson, THE SHADOW started out as a radio show and comic strip in DETECTIVE STORY MAGAZINE. He has been an inspiration as one of the first dark vigilantes to roam the streets. With a dark black hat, suit, blood-red mask and interior cape, there’s no question that he left his mark on Bill Finger and Bob Cane, who created their Dark Knight nine years later. Dynamite Entertainment has often teamed up their pulp heroes with DC Comics: see Kevin Smith’s BATMAN ’66 MEETS THE GREEN HORNET. Now, DC and Dynamite bring us BATMAN/THE SHADOW #2, the second part of a team up years in the making!

The story picks up right where BATMAN/THE SHADOW #1 stopped. In the first issue, a vicious murder in Gotham City puts Batman on the hunt. During his investigation, he encounters a forgotten figure — The Shadow. A mystery to find out who The Shadow is ensues. The mystery eventually backtracks to Bruce’s ancestors. It all comes back to a man who died fifty years ago, and who may still be alive. Bruce then retreats to the French Alps, searching for help and advice. He finds guidance from his former trainer, Henri Ducard. Batman seeks to find The Shadow and his identity, but we see Ducard transform into the figure himself!

BATMAN/THE SHADOW #2 immediately starts with a fight between Batman and The Shadow. There are a lot of questions needing answers. Who is The Shadow? Why murder a seemingly harmless Arkham Asylum employee? How has he survived this long while barely aging? Who is the real enemy here? Find out in BATMAN/THE SHADOW #2, which hits stands May 24th!