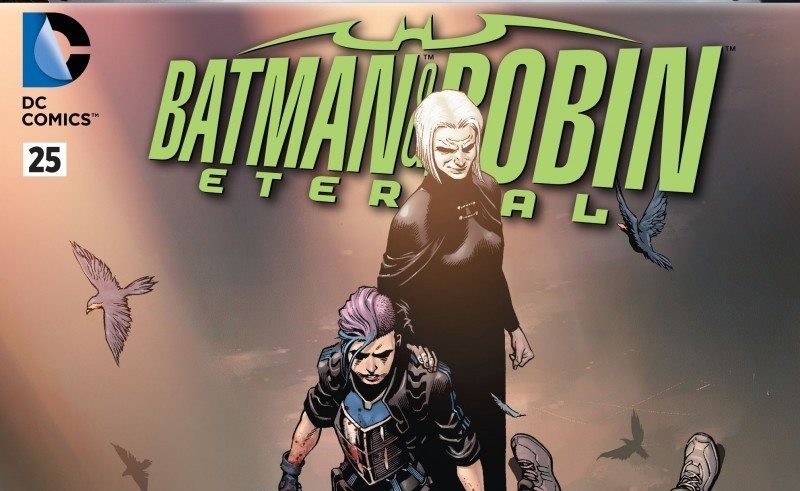 This week, in BATMAN AND ROBIN ETERNAL #25, Mother’s plan is foiled thanks to the clever thinking of the Robins, Dick fights Azrael, and Harper continues her very long conversation with Mother. Sounds like it’s stuffed to the gills with good material, right? It is, but maybe not in the best of ways. As I’ve said before, the story that the creative team is balancing here is really good, but it’s almost too large to be executed properly in a weekly book. It feels like certain storylines don’t get full attention because the book is released too quickly for an editor to sit down and go through the story with a fine-toothed comb, which is a shame given how much promise BATMAN AND ROBIN ETERNAL has.

In spite of this, though, there are some great moments peppered throughout the issue. My personal favorite is the inventive way the Robins dispose of Mother’s henchmen. Rather than continue fighting against overwhelming odds, the Robins use the door transports to send all the bad guys to Midnighter, who quickly disposes of them. It’s a great creative moment in a climactic fight, even though it does make you mourn for the Midnighter comic. I’m still bitter about its cancellation.

READ: Find out what happened last week in BATMAN AND ROBIN ETERNAL! 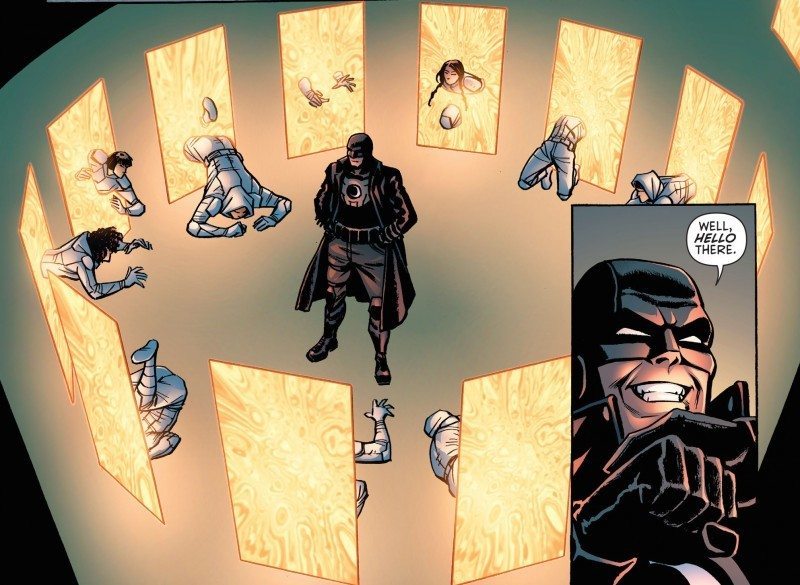 As another plus, the characterization is still on-point. If there’s one thing that the creative team consistently gets right, it is how each Robin should be represented. Even though BATMAN AND ROBIN ETERNAL #25 is bursting at the seams with active characters, James Tynion and company still manage to capture a certain essence of the characters in the few lines of dialogue they have. One issue that does continue to annoy me is DC’s treatment of Red Hood as some hero with a bad side. When Jason Todd was brought back, he was a violent vigilante with a penchant for his own brand of justice. Placing him in the Robin roster says that this is another Robin post-Batman. On the contrary, his story is much more intensely graphic, and to short-service his intent on being a vigilante seeking “true justice” doesn’t honor the history of Jason Todd’s character well. This isn’t a knock at Tynion, though, as he writes the character DC wants perfectly in line with their vision.

The art suffers a little in this issue. Pina and Sudzuka clearly have a good understanding of how to draw the human body, and the art isn’t bad, make no mistake. The problem is, again, that since this book is released weekly, they don’t have the time to sit down and rethink certain panels or poses. For instance, Dick’s fight with Azrael is not poorly drawn, but coloring it in such bright, vivid hues takes away a certain intensity that I think the script was aiming for. Thankfully, this problem isn’t consistent throughout, as Mother’s lair is given a range of ominous, icy blues to set the scene.

READ: Don’t know where to start with Batman comics? We’ve got you covered.

It isn’t that BATMAN AND ROBIN ETERNAL #25 is bad, per se; it’s that the series is capable of so much more. Many of the elements, good and bad, get short-changed here due to the book’s weekly release schedule. It’s a shame to see some great ideas suffer poor execution due to editorial deadlines. Though it won’t happen, this book would make a great addition to DC’s animated television series. The interaction of the Robins, the expansive scope of the story—it all begs for better attention in animation. The problem is that there’s so much to juggle here that the art format and release schedule aren’t able to do proper justice to the story. There’s always next week.