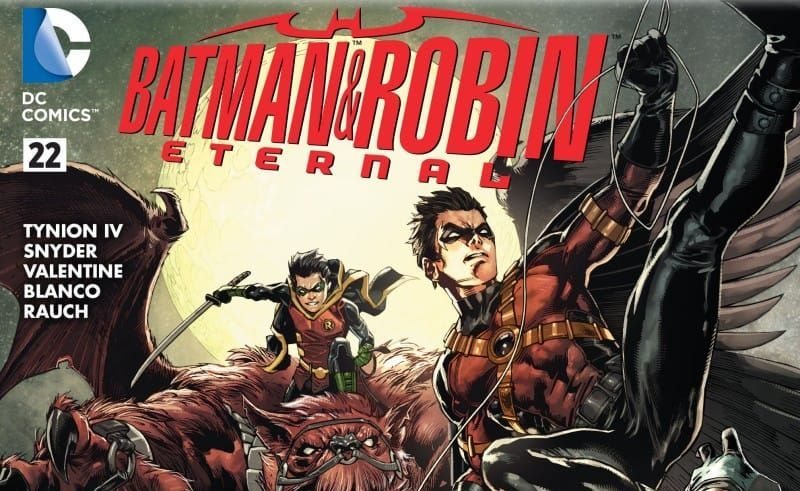 BATMAN AND ROBIN ETERNAL #22 picks up right where the last issue left off. After losing Cass and Harper, the Robins spend much of this issue doubting their abilities as both individuals and as a collective team. While the pity party is going on, Mother moves forward with her plans to create an army of young people.

READ: Can’t remember what happened last issue? Check out our review of BATMAN AND ROBIN ETERNAL #21!

While the issue does address the other major players in the story, it’s clear that Scott Snyder and the rest of the team devoted this installment to exploring the Robin legacy characters in great depth. It feels a little bit like a DOCTOR WHO episode where all the Doctors get to meet one another and kibitz about their shared and individual experiences.

As mentioned before, the Robins past and present are all doubting themselves after losing two of their teammates. If Batman, the guy who trained them all, can’t stop Mother, how can they? It’s a good point. If Robin is always supposed to be playing second fiddle to the Caped Crusader, how can he play his own tune? It seems as though the writing team wanted to explore how that’s possible. Issue #22 seems to be asking, “Who is Robin without Batman?” In a book that is all about the exploration of the relationship between The Dark Knight and Boy Wonder, it’s one of those constantly nagging questions, so it’s nice that the creative team addresses it here.

On the whole, that’s what much of this book is about. Each Robin has graduated from the mantle at some point in their careers, which has left it as a sort of hero training ground. Dick Grayson became Nightwing. Jason Todd eventually became Red Hood. Even Tim Drake elevated his title to Red Robin. Having them all together in this book, we arrive at a better understanding of not only who Robin is, but Batman as well. He wants his wards to be everything he is not and surpass him.

When Damian tells the entire team this, it is Batman relaying to all of us why he keeps taking on more Robins. It isn’t that they keep failing him as they believe. It’s that they exceed him in some way, and he lets them go. It’s apparent by the end of the book that the Robin title is one that lives in Batman’s shadow, but only because it is a title defined by Batman’s desire for the betterment of others, not because the mantle is inferior to him in any way.

Something that this issue excels at is the characterization of each of the Robins, even if it’s a little on the nose in some instances. Scott Snyder & co. understand that Dick Grayson is very much the leader of the group, Tim Drake is the inquisitive tech wiz, Jason Todd is a little bit removed, and Damian is the little spitfire he always is. The dynamic among them is most effective when they’re conversing with one another, but feels a little contrived when Batman is giving his speech to Damian. Still, it wouldn’t work in any other book and feels most at home in this book, particularly in the context of it.

This sort of characterization extends to the art as well. Robin suits have, on the whole, been pretty similar to one another. Only a few changes separate them from each other. This is conveyed in the character designs. It’s interesting to see just how similar the character designs of Tim Drake, Jason Todd, and Dick Grayson are. The three of them all have long, cut jaws, dark eyes and thick eyebrows that are oriented the same on their faces. This speaks to how all these characters fit in the “Robin” mantle, but the slight differences between them differentiate them enough to make them entirely different people. Beyond that, the art is fairly standard, but it’s clear that the focus of this issue was not on the art so much as providing a moment for a character study. 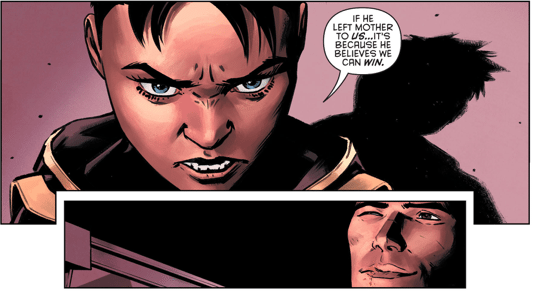 So, no, not a great deal happens in terms of plot in BATMAN AND ROBIN ETERNAL #22, but it’s the poignant character moments that make this issue worth reading. It ramps you up for what is sure to be a great finale in the coming issues as the team faces off against Mother and her soldiers. It’s the moving calm before the sure-to-be-explosive storm.