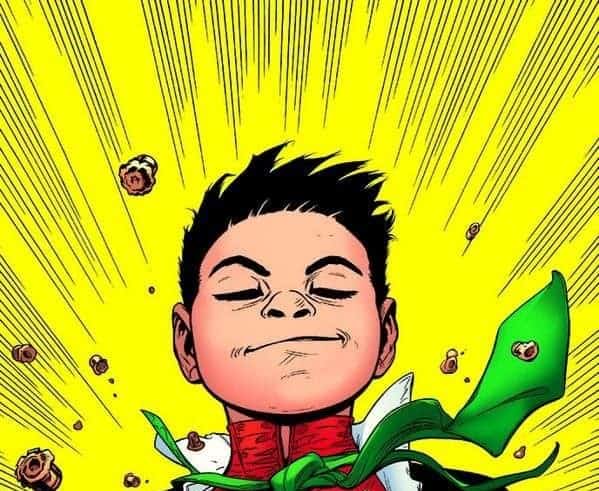 After all the exciting events leading to the return of Damian as the Boy Wonder, this issue took a step back and let the audience take a breather. This issue doesn’t really have Batman or Robin facing any villain in particular, but it does show how the balance of power between the two has shifted. Now that Damian has super strength, invulnerability and flight, it makes controlling Damian a bit more difficult.

Imagine Jonathan Kent raising an adolescent Clark Kent, except Clark is overconfident jerk! At least that is how the issue makes it seem in the beginning, but not everything is what it seems. It appears that Damian is feeling guilt for his failed “brothers” that were created by Talia. Part of what I personally enjoy about the Damian character is how at odds he really is with himself. On the one hand he wants to make his father proud and live up to the title of Robin, on the other hand he is reminded of his ties to the League of Assassins. Not to mention having your mother try to kill you is sure to leave some emotionally scars on a child.

This issue did feature some rather unsettling sequences for Damian’s nightmare. If the intention of artist Patrick Gleason was to disturb and frighten, then mission accomplished. The surreal nature of the nightmare is sure to stay with certain people after reading it. After Damian’s nightmare involving his mother and Ra’s Al Ghul, he embarks on a journey to Atlantis to visit Aquaman. The reason for his visit is to retrieve his mother’s failed experiments, his family. He takes them to a deserted island where they will be free to live their lives. It’s always enjoyable watching Damian display care towards something, be it another human, an animal, or failed clones. It is scenes like those which show Bruce and the audience that Damian does have feelings and could one day learn how to be a decent human being.
I look forward to seeing how Batman and Robin work together in the future, now that Damian possesses powers how will Batman keep his son in line?

Overall:
-A calm issue when compared to the previous issues of this series
-Showed a glimpse of humanity in Damian, which is always a positive
-Disturbing scenes during the nightmare sequence
-Good to see the dynamic duo together again, both bringing out sides of Batman that the fans don’t usually see
-Nothing spectacular occurs, but that was not the author’s intention