In the DC Universe, there exist two families that share a deep and meaningful bond.  The first is a family of detectives, people draped in loss and shadows that use their skills to fight crime and corruption in the city of Gotham.  The other is a family of people gifted by a great extra-dimensional energy source with abilities such as running at incredible and superhuman speeds to stop evil and inspire hope in the citizens of Central City.  These families are Batman and his boys, and the Flash and his speedsters.

The heroes from these two families are as different as night and day.  Somehow, though, they come together and work wonderfully.  The Bat Family works in the darkness to protect people from its ever-encroaching reach, while the Speedsters use their powers to inspire others to run towards the light.  They compliment each other, whether it’s fighting crime or just hanging out.  They provide a balance to each other.  Because when there is no balance, then a hero can easily lose themselves to the darkness.

The patriarchs of each superhero clan have a great dynamic in the comics.  They both experienced the loss of their parents at a young age, and it affected them greatly, hurtling them both down paths towards justice.

There’s little Bruce, who watched both his parents die at the hands of a random thug in a shady alley.  Now he operates in the shadows to make sure no one suffers from Gotham’s criminal scum like he did.  And then there’s Barry. He grew up with everyone telling him his father deserves to rot in prison because he murdered Barry’s mother.  He doesn’t believe them, and instead dedicates his life to proving that his father is innocent. Along the way, he also proves the innocence of many others convicted of crimes they didn’t commit.

Barry and Bruce both have great respect for each other, mainly because they both see a lot of themselves in each other.  Barry says that, even though Bruce might be a “detective” to everyone else, to him, “he’ll always be a scientist.” And Bruce believes that Barry is the best kind of person, calling him “the type of man he’d hoped to become if his parents weren’t murdered.”  They each have views of each other that puts them on pedestals.  To Barry, Bruce is an amazing scientist with an analytical mind that, like him, uses his skills to help make a difference in the world.  And to Bruce, Barry is a light that shines bright with his innate goodness, even when facing terrible odds.  Barry trusts Bruce to make the right choice, while Bruce trusts Barry to make the best choice.

These views shine through in other ways, particularly through their actions.  Barry always runs to Bruce during crises.  He knows that no matter what problem arises, Bruce will always know how to beat it.  It’s why he appears to Bruce in his final seconds of life before fading into the Speed Force in the pages of CRISIS OF INFINITE EARTHS. It’s why he goes to him when he realizes the world has been changed and it needs to be fixed within the special comic event FLASHPOINT.  Barry trusts that, together, they can figure out the machinist behind the universe’s rebirth in FLASH: REBIRTH #1.

And even though Barry runs to Bruce, Bruce believes Barry is the one who can make impossible things seem possible.  He believes Barry when he tells them they’ll solve the mystery behind ‘Rebirth’ in Flash: Rebirth #1.  He knows that if anyone could return from the dead, it would be Barry Allen.  It is even clearer in the JLA/JSA Crossover THE LIGHTNING SAGA when it appears the time-displaced Legionnaires are going to use the lightning to ‘revive a speedster’, and all signs point to the original.  Even in another reality, it is Bruce’s faith in Barry that convinces that universe’s Batman, Thomas Wayne, to trust Barry about ‘Flashpoint’ even if all Thomas has as evidence is Barry’s word.  Because Barry can make miracles happen, like giving Bruce one final connection to his father – a letter Bruce takes back with him to the New 52 timeline. 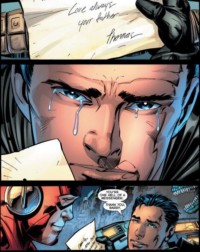 Bruce and Barry trust each other because they understand each other.  They’re not best friends. Those roles belong to Clark and Hal, respectively.  But that doesn’t mean their relationship isn’t meaningful.

With great mentors like Batman and Flash, it’s no wonder they are best friends.

They are with their families for a short time before tragedy strikes, and then stay with their respective heroes. They look up to the Batman and the Flash, and each try to live up to the expectation of being a sidekick.

In time, they settle in as heroes.  It helps that they are able to form their own super hero team, the Teen Titans.  This allows their bond to deepen, as they are able to spend more and more time together.  They become incredibly close.  So much so, that when Wally returns to the Universe after fixing his Uncle Barry, he wants to help his best friend remember him. To Wally, Dick is just as important as his own flesh and blood. 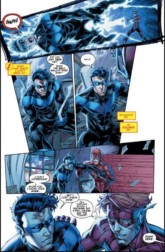 They are both heroes that not only change the world, but change the lives of their heroes.  They are the first sidekicks: the first people to carry up the banner of their mentors and fight alongside them.  The ones who show their mentors that they don’t have to fight alone. And when the time comes, they each don the respective cowls their father-figures would have wanted to see them in.  But now, they are making a name for themselves, figuring out what to do in a Universe that never wanted them together in the first place.

It is unfortunate that Jason never got to befriend a speedster.  With his personality, it would have been fun to see what a great dynamic could have played out between them.  Who knows what would have happened to Jason if he had someone who could really understand him like Wally and Barry do Dick and Bruce —  someone who could help balance the darkness inside.

If he had someone like Barry or Wally in his life, maybe he would have had an easier time letting his frustration go.  He could have had someone be there for him and listen to his problems. Instead, he has to take out his feelings on criminals.  Batman was there, but there are some things you can’t say to someone when they are part of your problem.  Maybe he wouldn’t have died, and if he did, maybe there would have been someone there to help ease the pain of death.

I’m not saying Jason turns into a villain because he never had a speedster in his life – a light to his darkness.  But maybe there are a few rough patches that could have been solved if someone was there to help him get through them.

Where Dick and Wally share many traits with Batman and Flash, Tim and Bart are near perfect copies.  They met in the miniature Justice League of the 90’s, YOUNG JUSTICE, and become fast friends.  Tim comes from a wealthy family, and joins with Bart after a rigorous training session that takes him across the world.  Bart travels back from the future, the grandson of Barry Allen and Iris West, needing help slowing down. Bart stays to learn from the speedsters around him.  Both want to help others in any way they can.

It’s no surprise how close they are, taking over from where Bruce and Barry left off.  They take Batman and Flash’s dynamic and add the element of adolescence to it.  Bart and Tim grew up around each other instead of meeting as full-fledged adults.  They learn, make mistakes, and fight side by side.  They are there for each other during the tough times, and help celebrate the good times.  Sometimes Tim can be too much like Batman, and needs Bart’s light to curb the darkness.

This is a work in progress.  Wally just began his superhero career in THE FLASH comics and the comic they’re both in, TEEN TITANS, has just started.  And even though it’s gotten off to a rocky start (what with the artist leaving due to creative differences) it seems very promising.

I will admit, before New 52, I thought Damian was going to end up befriending Irey West.  It would make sense, seeing as Dick was his mentor and Wally and Dick were best friends, and Irey was Wally’s daughter.  Plus, it would have been interesting to see what the bat/speedster dynamic would change with a female speedster.  But, like many things in the New 52, Irey West AKA Impulse II, is wiped from existence, and so are any chances of Damian having a speedster friend. 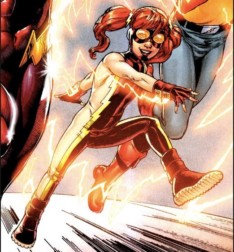 Thankfully, with the introduction of the new Wally West, chances looked as good as ever.  Wally definitely has a personality that sets him apart from all the other speedsters, similar to Damian in that regard.  They each take a sarcastic, aloof stance to hide the fact they’re trying to run away from their pasts.  Wally, from a father who wasn’t all that great to begin with becoming evil once touched by the Speed Force, and Damian, an Al Ghul by blood but not by choice.

I think this is definitely shown in the way he handles Wally in TEEN TITANS REBIRTH #1.  Damian captured Starfire, Beast Boy, and Raven in ways that caused great pain.  When it came to Wally, he simply knocked him out.  And like that famous saying, he saved the ‘best’ for last.

Not only that, but Goliath, Damian’s pet, already seems to like Wally, licking him happily in the very next issue.  Goliath is very loyal to Damian and licks Wally rather than the others.  I think it might be sign those two will grow close, and because of that, so will Damian and Wally.

Now this is yet to be seen.  I mean, they could be playing off  JUSTICE LEAGUE VS. THE TEEN TITANS and try Robin and Raven together and buddy up Beast Boy and Kid Flash.  That being said, if they do end up partners, it’s going to be a treat to see how the relationship develops. It could be similar to the others, or completely new.

It’s Not a Coincidence

The history of the Bats and the Flashes is one that interconnects and intertwines through various comics.  Their relationships are always based off mutual respect, admiration, and a willingness to give each other a chance in a world that’s never been too kind to either of them. The Bats and Speedsters always stand together as two halves of a whole. The darkness and the light working together and keeping each other grounded. Bats keep their Speedsters from running away from the world. Speedsters keep their Bats from getting lost in their heads and loner mentality.

It’s something that just works. That’s why so many writers have paired them, whether it be the adult Bruce and Barry, or a younger partnership like Dick and Wally. It’s refreshing, and I wish all these heroes interacted more. A comic series just about this dynamic would be amazing. Some things are just better together like Batman and the Flash.