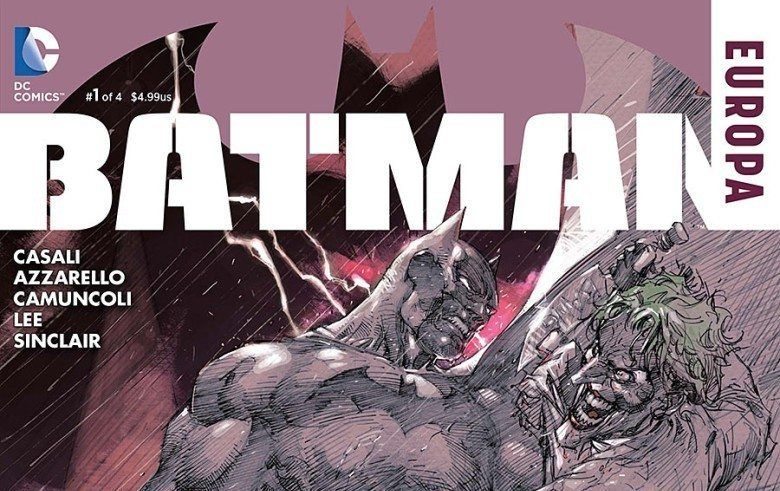 After 11 years of waiting, a tale from Batman’s past shows us another side to the Batman/Joker dynamic. Did someone say teamup?

Blood splatters the floor, a red lipped grin flashes at the reader, a cowled jaw grimaces in pain. BATMAN: EUROPA #1 wastes no time in introducing our two main protagonists in the aftermath of battle. Both exhausted, both covered in blood, both gathering strength to end this. Before we learn too much about what’s going on, the story leaps back into the past as Batman takes on Killer Croc in a fight that is a lot more difficult than expected. But even here Batman knows something is up. It’s taking too long to take down Croc. There is something wrong. Before he can deal with it, he gets a call from Alfred. There’s a problem in the Batcave. 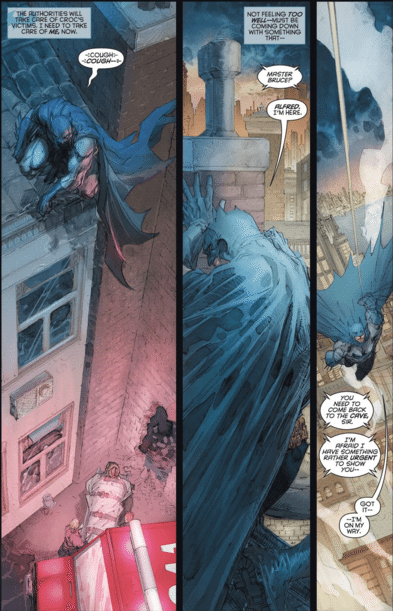 READ: The new BATMAN faces Mr. Bloom in our review of BATMAN #46 here!

The story presented here is a simple one. Batman has a virus and only the Joker can help him. Its execution is pretty straight forward and it’s not long before Batman is moving among the shadows of Berlin. The story is driven by the inner monologue of Batman and it feels slightly off. This Batman is full of cultural references, and a slightly witty repartee. It doesn’t read like Batman (or who I think Batman is anyway). His interactions with Joker are pretty enjoyable, but again he keeps getting surprised by developments. Sure Batman can get surprised, but his reactions seem off. If this were the early days of Batman I could understand, but this guy has done the Bat-Dance for many many years. Maybe I’m reading too much into it, but it’s definitely jarring. 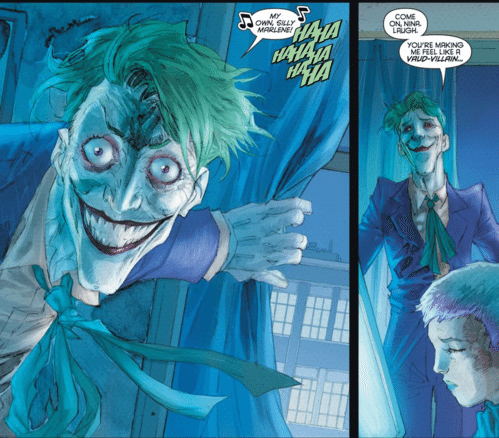 READ: Jim Lee draws the Man of Steel in our review of the SUPERMAN UNCHAINED series!

Where this book truly succeeds is the gorgeous art which graces each page. This is Jim Lee at his best. There is a restraint here which works well for the book. It’s not choc full of splash panels and superhero poses. Each panel is lovingly drawn and his inks are light but firm. Giuseppe Camuncoli’s layouts meant that Lee’s art flowed from panel to panel, and visually told a near perfect story. Lee’s Batman is a sinewy muscly athelete, but weighed down with age. Some panels give more than a strong vibe of Miller’s THE DARK KNIGHT RETURNS. His Joker is a gentleman psychopath, all wild eyed devilish glee one moment, while calm and collected in the blink of an eye. Alex Sinclair’s colors give the book a dream like feel, a world of dark blue, of the night.

While the story didn’t grab me, the art made this one of the most beautiful looking books released in recent memory. For that alone pick this up.

Agree or disagree with my review? Leave us a comment in the section below!

READ: We look at the top 5 Batman/Joker clashes!