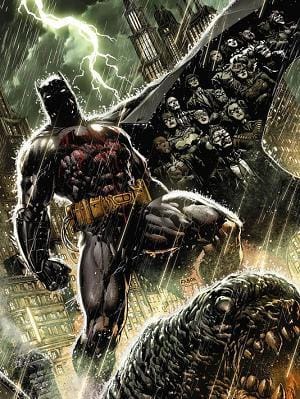 We find Hush threatening Jason Bard with a cracked alcohol bottle. After the events of last issue, Bard is feeling guilty and isn’t so sure he wants to continue. Hush is having none of that, and tells Bard to get his head back in the game. Then, Hush plans to contact Gilpatrick in SWAT to acquire something that could be of use to them.

Elsewhere, Batman and Julia are attempting to round up all the ammo dumps that Batman has scattered across Gotham City in case of emergency. Julia comments on how Batman could not have thought that having these all over Gotham could be potentially dangerous. I have to hand it to Julia, she has guts to talk that way to Batman. Still, he does need to realize that with all his skills and knowledge, he’s still human. Julia’s comments, therefore, showcase Batman’s occasional poor judgment. Batman faces off against a large GCPD officer who is extremely well equipped, but is still no match for Batman. The fight was quick but still managed to be entertaining. It’s always fun watching Batman take down an officer with ease.

Hear more about the DC Universe from some of the creators in our interviews!

Another aspect of the issue was Batman’s relationships with Luscious Fox and Alfred. Fox has always supported Batman’s endeavors in the past, but due to the recent events at Wayne Enterprises, he has been put into an awkward situation. Batman assures him that situation will be under control. As for Alfred, he is concerned for his daughter and with good reason. Alfred may have been able to accept Batman taking in a ward in the past, but this is his own flesh and blood! Seeing Batman appease Fox and reassure Alfred that he will protect his daughter shows how Batman is a good friend. The issue concludes with Julia being surprised by Hush when working away from Batman.

Positives:
– An exceptional issue which highlighted the other aspects of Batman, including his ability to be a good friend to his comrades.
– It is to be expected that Alfred would be concerned for his daughter and I’m glad the issue addressed that.
– Heavy on the character and story development.

Negatives:
– Very little action.
– Hush took a back seat this issue in order to push the plot forward.