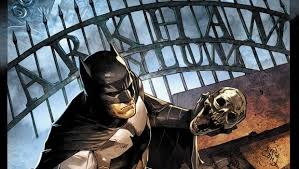 This issue shows us the collapse of Arkham Asylum at the hands of Blackfire (or, rather, at the massive otherworldly hands of The Spectre, who stops Blackfire’s scheme). The sudden loss of Blackfire’s magic causes the whole thing to collapse while Batman struggles to make his way to the scene.  This, it turns out, is part of the reason for Arkham being moved to Wayne Manor.

Want to catch up on past issues before reading on?  Check out our reviews here!

This title is a true unification of all of Batman’s universe. We’ve seen a ton of Gotham’s major players throughout this series, and now, we may be seeing some of the most monumental moments to ever happen to Batman and his allies.

Those of you who have been following the series will remember that Alfred was locked up in Arkham. It is anyone’s guess as to whether or not he survived the collapse… but my hopes aren’t high. In fact, the loss of Alfred is as monumental, if not moreso, than the loss of Bruce’s parents, Damian Wayne, or perhaps even Bruce himself. Whether or not Alfred is truly dead remains to be seen, but if he is, this is a catastrophe of unheard of proportions for Batman.

Speaking of major events, read up on some of the biggest comic book news in our articles!

Moments before the collapse, we also see a trapped Bane. His character, if he’s going to die, will get a much more in-your-face death than simply appearing in the background.

Batwing, however? Hard to say. He was underneath Arkham during the collapse, and his arms are left pinned while his suit slowly loses power. The last words he utters in this issue are the “Our Father” prayer… words that mean a lot coming from the son of Lucius Fox.

So what does that all mean?  Explore the depths of the medium in our Comic Book Theory posts!

Deaths aside, we get a huge hint at the return of a major villain, as well. Joker’s Daughter, as she’s been calling herself, gets beckoned into the shadows by an unknown figure. When she reappears to face Batman, she is armed with a crowbar and a suicide-bomber vest. This is one of the strongest signs that the Joker isn’t completely gone (despite how satisfying of an end he met in Death of the Family).

Overall, this continues to be one of the best storylines I’ve read in Batman’s continuity, and definitely the strongest I’ve read since the New 52 reboot. I can’t wait to pick up a hardcover edition when it is collected for the first time. This story is an epic, amazing, and truly worthy chapter to the Batman continuity.

What’s your favorite Batman story?  How is Eternal shaping up?

For interviews with James Tynion IV and other creators, check out some of our videos!