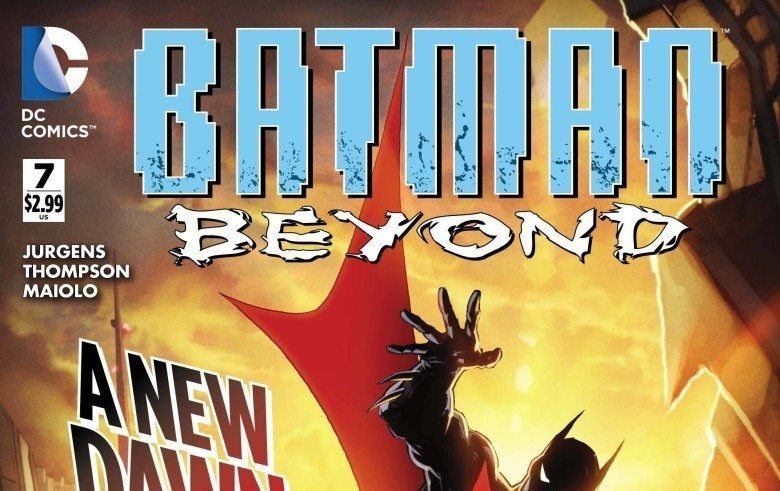 With years of history, Batman and his partners have been through and seen a lot.  Tim Drake is one of those partners who has probably experienced some of the most extreme events.  Now, he’s been taken in a whole new direction- to the future!

Having taken the place of Terry McGuiness as Batman Beyond, Tim starts off the issue struggling to get the Batman Beyond costume in working order.  With his powers of deduction, displaying his superior detective skills, Tim figures out Bruce’s hidden code within the Batsuit’s programming, and Tim gets to test out the gear, cleaning up the streets from a few Jokerz.

The b-story in this issue follow Terry’s brother, Matt, as he investigates the origins of a cyborg arm.  This ultimately leads back to Metropolis.  This sets up for an issue that will bring Tim out of Neo-Gotham and into the Justice League’s domain!

READ: For more Batman action, check out our review of BATMAN #45!

While not a particularly action-packed issue, much of the entertainment value from the title comes from seeing a familiar character in very unfamiliar circumstances.  We’re learning the status quo of this version of the future alongside Tim, and the whole experience is quite a treat.  The scenes in which he’s testing out the Batsuit are easily the best part of the issue- well choreographed, well written, and visually exciting.

Those of you who are familiar with BATMAN BEYOND will also be interested in Matt’s sideplot, but readers who aren’t faithful followers won’t care to learn more.  The real appeal of the issue is Tim Drake in the Beyond costume, and it’s a lot of fun.

The writing works well- particularly for Tim and Barbara.  Seeing the dynamic of these two characters shift as their ages have changed is a very interesting aspect of this issue, and I’m curious to see how things will continue for the two after Tim has officially moved in with her.

CLICK: Learn all you need to know about Tim Drake here!

The art portrays the future beautifully- it’s easy to see why Neo-Gotham is considered to be one of the best places in this future.  The city is treated as a spectacle- whether in long establishing shots, or speeding in the background of a flight sequence, it is truly breathtaking.

If you’re a fan of BATMAN BEYOND, Tim Drake, or are looking for a cool title to jump into, then pick up BATMAN BEYOND #7 today!