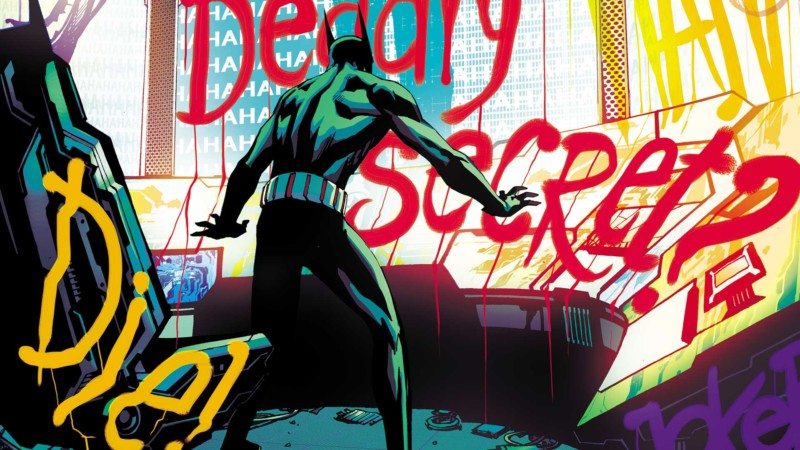 BATMAN BEYOND has been treading water for quite some time now. What started out as an intriguing return to Neo-Gotham, with Terry McGinnis back in the Batsuit and an old villain’s deviously plotting to revive The Joker, quickly devolved into a slugfest between Batman and a whole bunch of angry Jokerz. Then, the end of last issue exploded with an incredible revelation. The “Joker” is actually a drugged up Bruce Wayne in disguise! The implications of this twist were enormous, and my excitement for BATMAN BEYOND #4 was beyond containment. Unfortunately, the issue just offered more of the same visual noise, and ended in virtually the same place that it started. 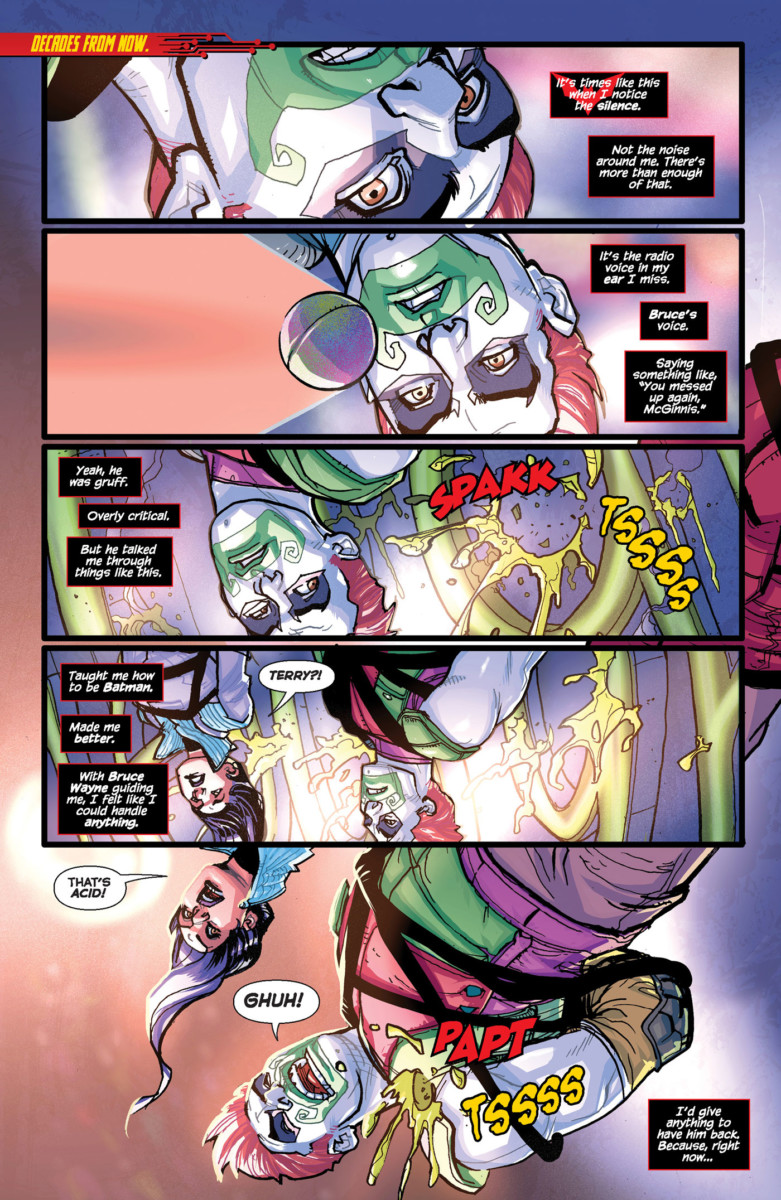 The issue begins with Dana and Terry, in his Joker disguise, dangling from a building and being pelted with acid bombs. Matt, Terry’s brother, sneaks into the Joker’s compound, where lead Joker Terminal (cleverly resurrected from TV series’ character vault) is busy bragging about the brilliance of his phony “Joker” revival scheme. Eventually, Terry rejoins Matt, who presents him with a totally awesome prototype Batsuit straight from the cave. Terry suits up, much to Dana’s shock. The two have a quick and very clichéd back and forth about how Terry should never have kept his secret from her. Without really resolving the argument, Terry goes back to doing what he’s done for the past three issues – pummeling Jokerz. At least he’s pummeling in a shiny new suit.

READ: Our review of BATMAN BEYOND #1, which saw the triumphant return of Terry McGinnis!

This arc isn’t horrible, it’s just all hype without any real delivery of its promises. That conversation between Terry and Dana should have been a real humdinger, but instead it fell flat as pancake. The issue was too preoccupied with Terry fighting Jokerz to give us anything resembling emotional impact. Writer Dan Jurgens sadly seems to be running on fumes. His one plot point of significance, the Bruce Wayne/Joker twist, is being dragged along like roadkill. It’s the only thing worth caring about, and the comic seems to know it. The desperation to cling on to this plot point is screamingly evident, as the issue literally draws a circle around it. By the end, the only forward momentum gained is that now Terry has joined the reader in the knowledge that Bruce Wayne is alive. If Jurgens had plotted this out a bit more effectively, Terry would have learned about Bruce last issue. Instead of discovering the truth through a long-winded Terminal monologue, we could have discovered it through the eyes of our main character. It would have been just as shocking, and twice as emotionally compelling. It would have spared us this entire issue too. 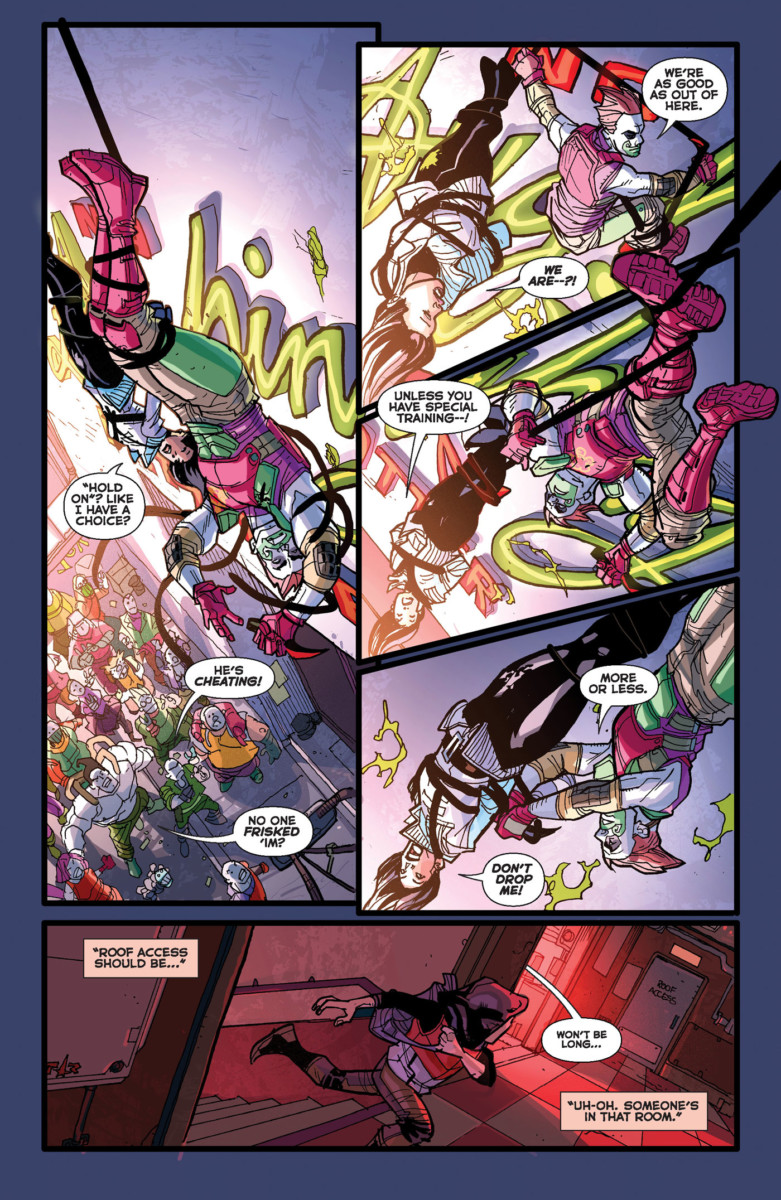 The artwork is nothing special, but Pete Woods’ creative character designs are always appreciated. Like that giant Joker with the venom pump and the Elvis hair, who looks like a cross-breed between Bane and Johnny Bravo. Then there’s little hoodlum Matt, who’s sneaking around alleyways in a black hoodie and an orange life preserver that I can only assume is supposed to be a vest. I guess Woods was going for a “Marty McFly tries to be a Sith Lord” kind of look. Most notable is Terry’s new red and black Batsuit, which is like the old Beyond costume, but with red lightning patterns zig-zagging all over. Sort of reminds me of one of those whacky old Batman Beyond action figures, with designs that would have looked outrageous on the TV show, but totally awesome in the palm of your hand.

READ: For a check-in with the tales of present day Batman, read our review of BATMAN #15!

Ultimately, this comic is okay. It’s not the worst. It’s just really frustrating how it’s stretching out a plot that should have ended two issues ago. This would have been a really intriguing arc if it had been introduced and wrapped up in three issues. Incidentally, it’s the same problem Jurgens had on his initial “Doomsday” arc over in ACTION COMICS. The arc started strong, but was really lurching along by issue #7. This particular problem has since been resolved in ACTION COMICS. We can only hope the same will be true of BATMAN BEYOND once Jurgens decides it’s time to put these Jokerz to rest. Terry’s already Bataranged his way through like 200 of them. Time for Terry and Bruce to reunite already. That’d be schway.