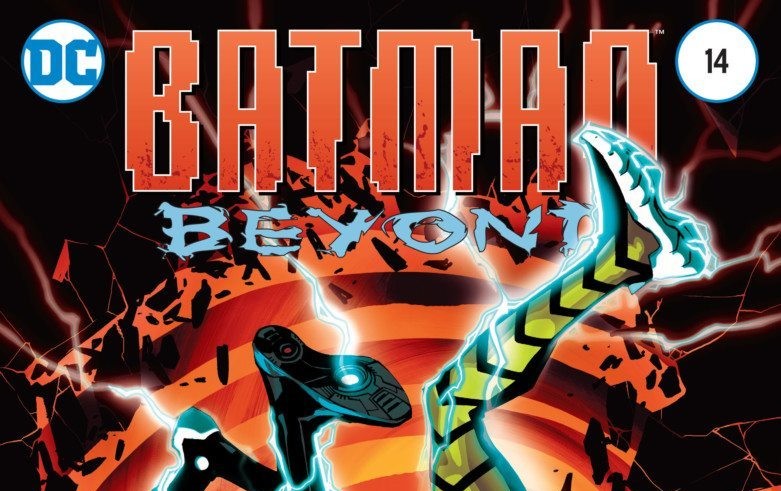 The story continues for the future Batman and Rewire with part three of “Wired for Death” in BATMAN BEYOND #14! How did Rewire come to be and why does he want to kill Batman? We find out the answers to these question through some impeccable flashbacks.

In the previous issue, BATMAN BEYOND #13, Tim Drake found himself incapacitated after a fight with Rewire. The bat-suit was unresponsive to Tim’s commands, which led to his near-death experience. He was saved by Barbara Gordon and given some insight on Terry McGinnis, the former Batman Beyond. This led to the big reveal that someone new has been in the Rewire suit: Terry McGinnis! 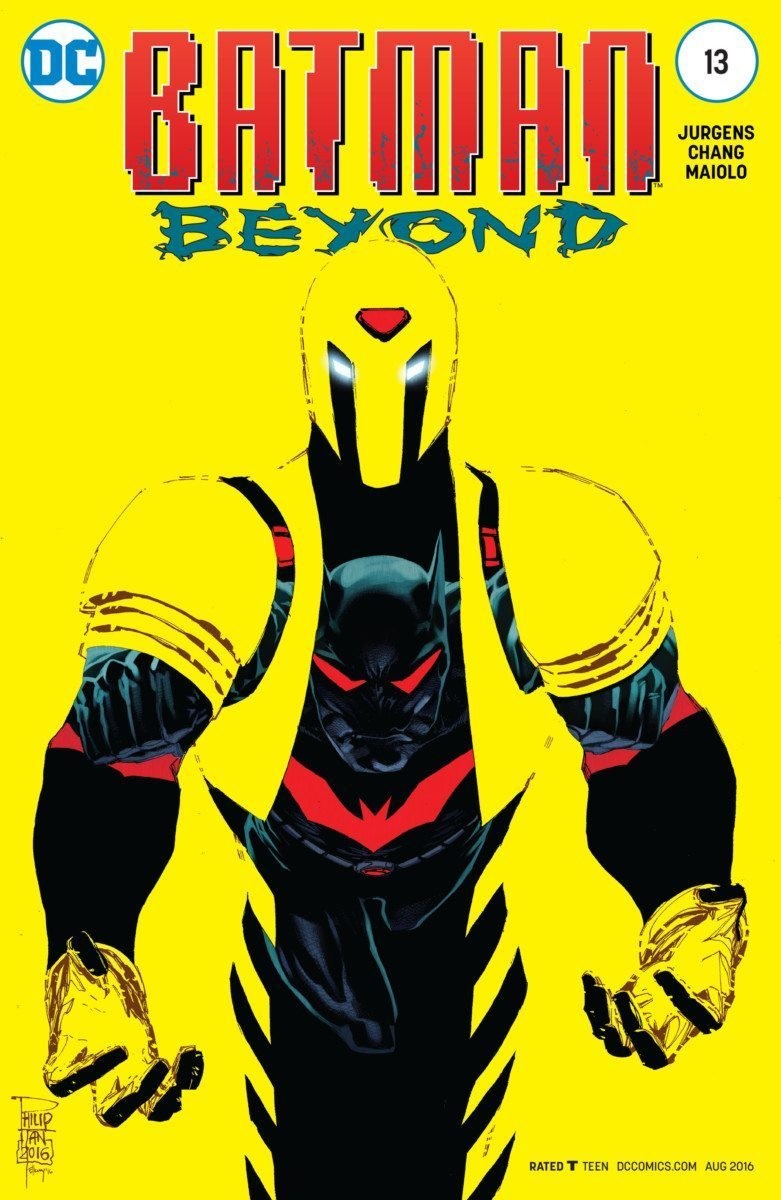 BATMAN BEYOND #14 is incredibly insightful as opposed to an issue jam-packed with action. The issue focuses mainly on Terry McGinnis and is split into two parts. The first part involves Tim Drake and Matt McGinnis, Terry’s younger brother, going for a run and discussing how Matt found out that Terry was Batman. Tim wants to know more about the man who gave him the future Batman suit back in the FUTURES END event. The second part tells of Rewire’s motivation to stealing high-end batteries that he needs to charge a pacemaker-like device in his chest. Terry doesn’t know who he is but is manipulated by Spellbinder to believe he is the Davis Dusk (the deceased Rewire) and to believe that he must steal to live. 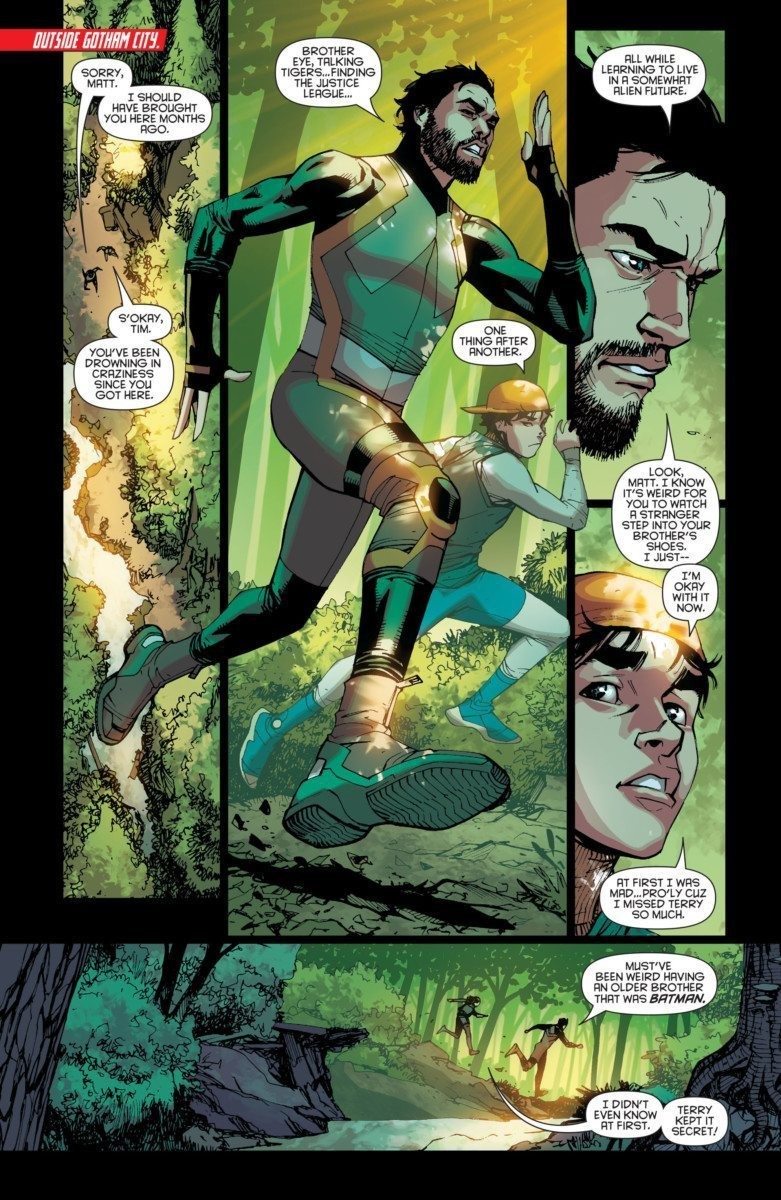 I like the structure Dan Jurgens chooses to use in this issue. Through Matt and his flashbacks, we are given a reminder that Terry was Batman while giving a touching story of Terry and his younger brother. The well-placed flashbacks show much of Terry’s desire for justice and need to keep others safe. Also, the explanation of Spellbinder’s hold over Terry is very welcomed. This is especially true after the last issue’s cliffhanger in which Terry is in the Rewire suit. It wonderfully explains why the bat-suit is unwilling to work against the former Batman.

The Terry McGinnis version of Rewire is well developed in the issue. While maintaining his values of justice and safety, we see how he turned to villainy. Spellbinder manipulates Terry by adhering to his morality to make him a villain. However, I do have a gripe with excluding how Terry even became Rewire. Last time we saw Terry, he died in the past while trying to save the future and the world from Brother Eye. I’m not sure if Rewire Terry is a result of a disrupted timeline, but an explanation coupled with the story behind Spellbinder’s influence would have made the issue more satisfying.

READ: Matt McGinnis has been active in BATMAN BEYOND! Look back on his antics with our BATMAN BEYOND #8 Review!

Bernard Chang’s art in this issue is eye-catching, especially with the story splitting up into two separate parts. Each of the two parts offers a different tone and feel to the art. The highlight of Chang’s work must be the flashback that occurs throughout BATMAN BEYOND #14. When Matt recounts the events that led Terry to reveal to Matt that he is Batman, the panels become brighter with a blue theme. Also, when we see the flashback of Rewire, the panels take on a yellow and brown tone. In both flashback scenarios, the characters are drawn slightly different and a bit faded from those in the present. These differences really create a feel that the events are in the past and are distant memories. 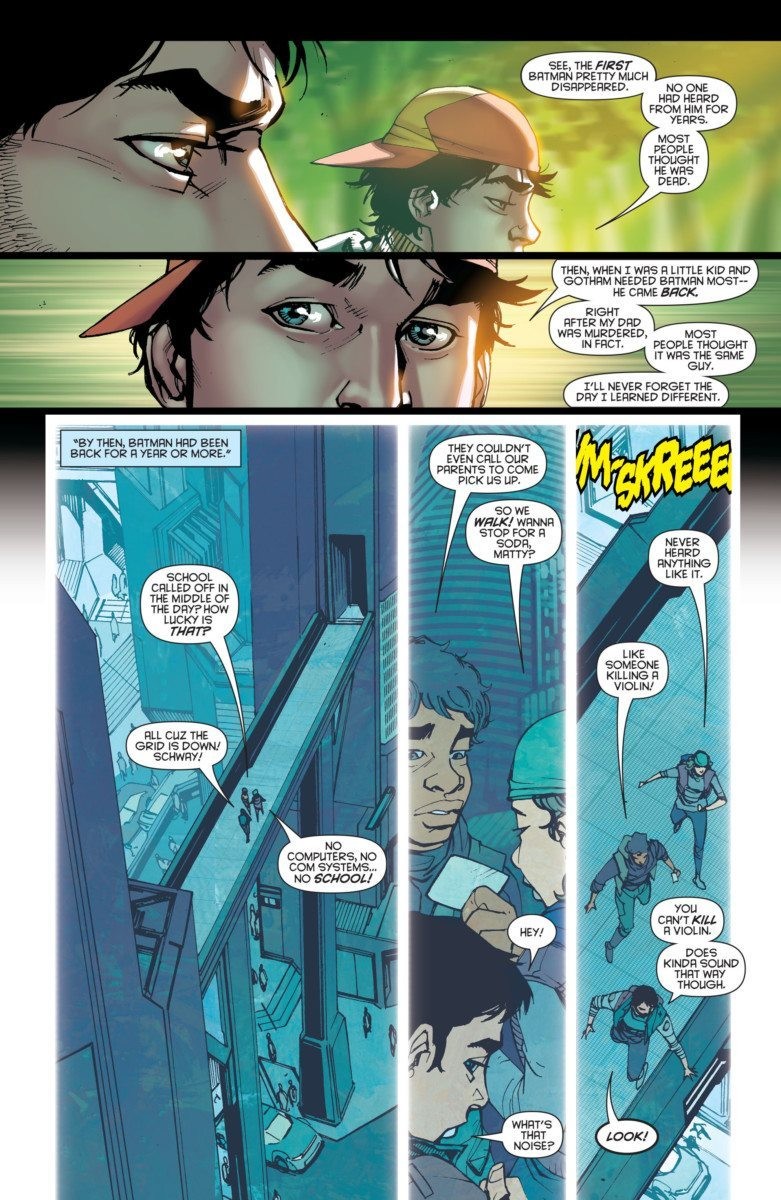 BATMAN BEYOND #14 is a strong issue that bridges the first two issues of the “Wired for Death” story arc to the last issue. It reveals so much about Terry as the new Rewire and it reminds us of Terry as Batman. Putting together the past and the present sets up the conclusion of the story arc for a grand finale between Batman and Rewire. Hopefully, we’ll get some more on Terry’s resurrection in BATMAN BEYOND #15!