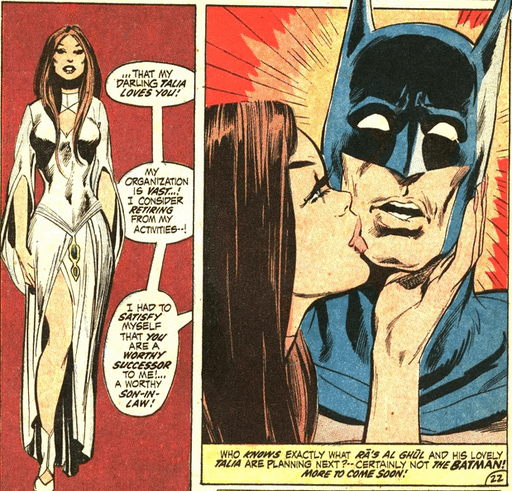 In 2006, discussing his role in BATMAN & ROBIN, George Clooney claimed, “I was in a rubber suit and I had rubber nipples. I could have played Batman straight, but I made him gay.”

Clooney may have had a point (see: rubber nipple suit), but the character’s history doesn’t point to homosexuality. A close reading points, instead, to Batman being asexual. The following analysis will go through many of Batman’s previous relationships to show the many events that provide strong evidence of Batman being an asexual character.

There are multiple definitions for asexuality, but the basis for this argument uses the definition for asexuality given by the University of North Carolina. The basic definition used here is that “an asexual individual may choose to engage in sexual behaviors for various reasons even while not experiencing sexual attraction. Asexuality is an identity and sexual orientation; it is not a medical condition. Sexual attraction is not necessary for a person to be healthy.” Furthermore, there are two primary types of asexuality. The first is gray, meaning a person who falls between the spectrum of asexuality and sexuality. The second type is demisexual. This type of asexuality describes those who don’t experience a primary sexual attraction but develop a secondary one after a relationship is formed.

Batman’s asexuality has less to do with his actions and more to do with the reasoning behind those actions. In the comics, Batman has dated countless women over 75 years of publication. From prominent figures like Catwoman and Talia Al Ghul to regular citizens like Vesper Fairchild and Jezebel Jet, a long line of female love interests would point to Batman being a straight character. Despite the roster of valets, Batman’s character actually fits more with the definition of asexuality. 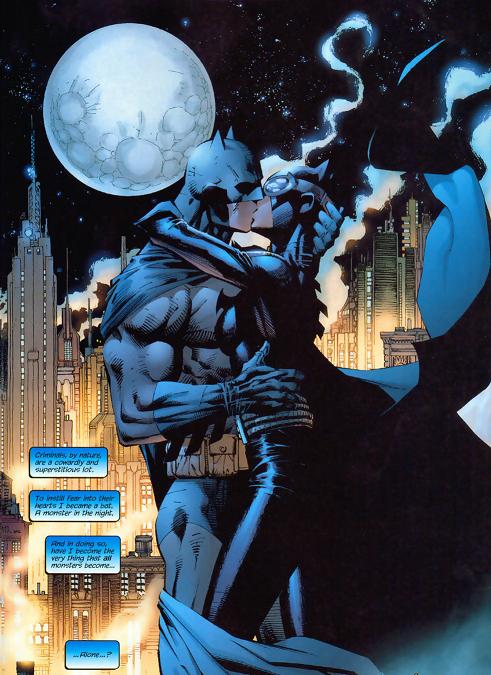 The most prominent and constant romantic relationship in Batman’s life has always been with Catwoman. The closest the two characters have ever come to an actual relationship came in the panels of Jeph Loeb’s HUSH storyline. Batman opens up his life to Catwoman. He lets her see his vulnerabilities and parts of his personal life. The problem is, he never feels truly attracted enough to let his guard down fully. He could never shake the feeling that their relationship happened because one of his enemies forced it to happen. In his mind, their relationship was not because he had any sexual feelings towards Catwoman.

Instead, he explicitly questions whether it was Scarecrow’s toxins or Poison Ivy’s spell that caused his feelings by explicitly stating “we both know what Scarecrow said about something else affecting my mind… or we both could be under Ivy’s spell” when discussing his relationship with Catwoman. In the end, he rejects any kind of sexual emotion out of a belief that they are not his true feelings.

A similar situation occurred during Batman’s relationship with Jezebel Jet in Grant Morrison’s R.I.P. run. This time, though, his instincts were proven correct. Jezebel gets close to Batman in the hopes of helping the Black Glove destroy him. Bruce Wayne reveals to her that he is Batman and genuinely seems to be getting close to her, but, in the end, it turns out he knew who she was the entire time and only used her as a means to defeat the Black Glove. Their relationship was never based on sexual desire. Instead, it was purely a means to defeat an enemy. 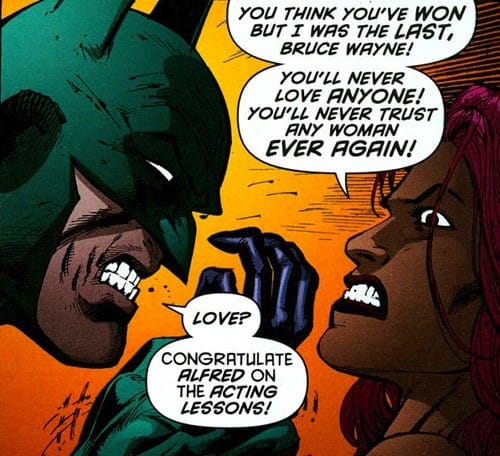 His fight against crime also overshadows the loss of another one of his girlfriends, Vesper Fairchild. During the 90s, Bruce and Vesper dated until she disappeared during the NO MAN’S LAND story arc. She returned briefly afterward, only to be killed on orders from Lex Luthor, although Bruce Wayne was framed for the crime in the arc BRUCE WAYNE: MURDERER and incarcerated. As he sits in jail, it is the urge to fight crime that drives him to free himself. He claims in BATMAN #599 that “time moves so slowly here… I can feel each second ticking by… being wasted. While I should be out there working.”

The story of Batman choosing to fight crime over developing romantic relationships plays out over and over. His multiple attempts at a relationship with Vicki Vale failed because she hated how he was always gone (fighting crime, unbeknownst to her). He planned to reveal his identity to her, but could not because the fight against crime outweighed any attraction or sexual feelings he felt towards Vicki. This was more of an example of gray asexuality as described above. There did seem to be a connection between the two that kept drawing them together, but there was not enough of a sexual attraction to keep Batman invested in the relationship. He hovered in between sexuality and asexuality and, in the end, chose to push any potential sexual feelings aside to continue to focus on crime. 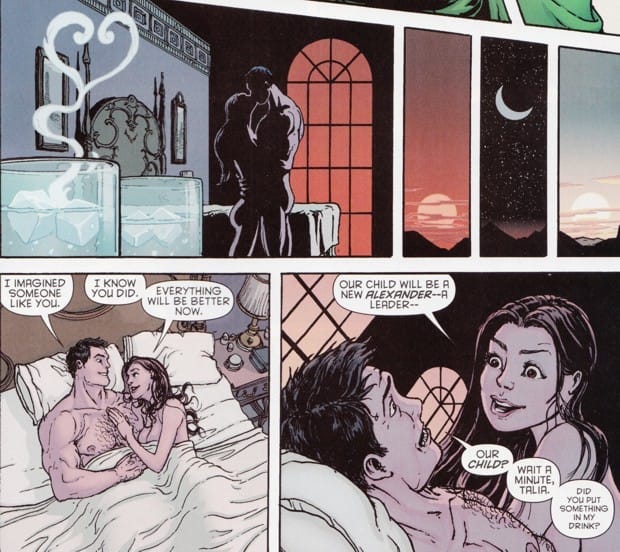 The only time I have felt that Batman was ever really presented as being a heterosexual character with a true attraction to a woman was during his relationship with Talia Al Ghul. Even here, their time together turned out to be nothing more than a seduction by Talia, who was following the orders of her father to create an heir to merge the Wayne and al Ghul bloodlines. It was then revealed, again by Grant Morrison, that the night that their son was conceived was the result of him being drugged and essentially sexually assaulted by Talia. He was tricked into the relationship and then drugged to ensure he would go through with impregnating Talia. Even she was unsure of his true feelings. She tried to play to what she believed to be his sexual nature but, as with the Vicki Vale example above, he was able to push aside any sexual feelings that Talia may have created through her seduction.

In all of the above examples, Bruce Wayne’s relationships are sexual, but they’re not based on sexual desire. Rather, they occur, and subsequently fail, because of Bruce Wayne’s asexual nature. Some of them falter because he is presented as a “gray asexual” and eventually pushes away any potential sexual feelings. In other situations, he believes that the sexual feelings he’s experiencing are based on his mind alteration or manipulation and not his own true feelings. In conclusion, Batman has presented many tendencies that fit the proposed definition of asexuality. Through his multiple relationships, and the subsequent fallout of each, there is a lot of strong evidence to indicate Batman is an asexual character.