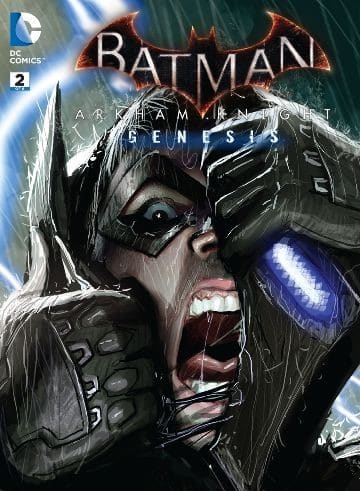 The first entry in the BATMAN: ARKHAM KNIGHT GENESIS  was a strong opening to the series, but could the second issue follow suit? Will it continue to detail the origins of the Arkham Knight, or progress the story forward?

The second issue of BATMAN: ARKHAM KNIGHT GENESIS begins somewhere completely new for the series, a battle between Robin (Tim Drake), Nightwing, and Deathstroke. As the three of them trade both blows and one-liners, the Arkham Knight watches from above. As is the case with the Arkham Knight, both in the video game and the comics, he is musing about the impact that Batman has on society, particularly those close to him.

The story then flashes back to the past, to the time when Jason Todd was still Robin, depicting a battle between him, Batman, Scarecrow, and the Riddler. Scarecrow notes the fact that this is a “new” Robin, to which Todd confirms. Batman would later scold him for this, given that the element of surprise is their biggest advantage, there is no need to give away information. Robin begins to disagree, but ultimately accepts blame. It is here he makes another remark, similar to those of the first issue, that it is clear Batman will never be able to trust anyone.

The story, still focusing on Todd’s early years as Robin, shifts gear to a montage of sorts, depicting Todd’s life by day as a ward of Bruce Wayne, and by night as Batman’s partner. As Bruce shows Todd the library entrance to the Batcave, the Arkham Knight interjects to make a comment similar to the first issue, about wishing he had thrown Bruce down the elevator shaft right then and there.

The narrative then shifts back to the present, continuing the struggle between Robin, Nightwing, and Deathstroke. Deathstroke claims to have killed Batman, which Batman himself quickly debunks. 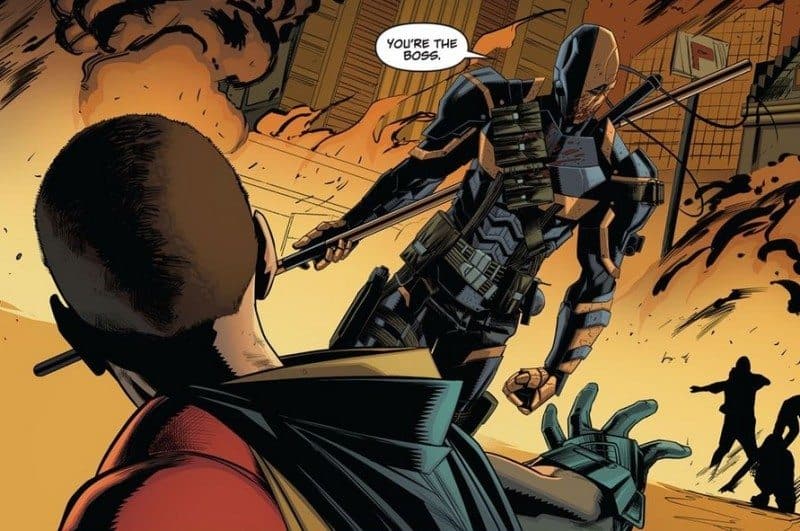 As Deathstroke escapes, Batman scolds Robin for not following orders, claiming that had Robin listened to his instructions and not pursued him, Deathstroke would have led them to who he is working for. It is then revealed that Deathstroke was in fact working for the Arkham Knight. Similar to the Arkham Knight’s business with Hush in the first issue, whether this was a “one time deal”, or they will be in cahoots for the entirety of the series has yet to be determined.

For the final few panels, the narrative shifts back to the past, showing Batman in battle with a battle-robot suited Joker at an abandoned chemical plant. Despite his explicit instructions to remain in the Batmobile, Todd disobeys, and begins to pursue the Joker. Batman tries to warn Todd that he is doing exactly what the Joker wants, however he is too late, as it appears Todd has already been blown up by the Jokers trap.

For the final panel, the story shifts back to the present tense, showing the Arkham Knight claim that he is going to be returning to “the scene of the crime”, ending the issue. 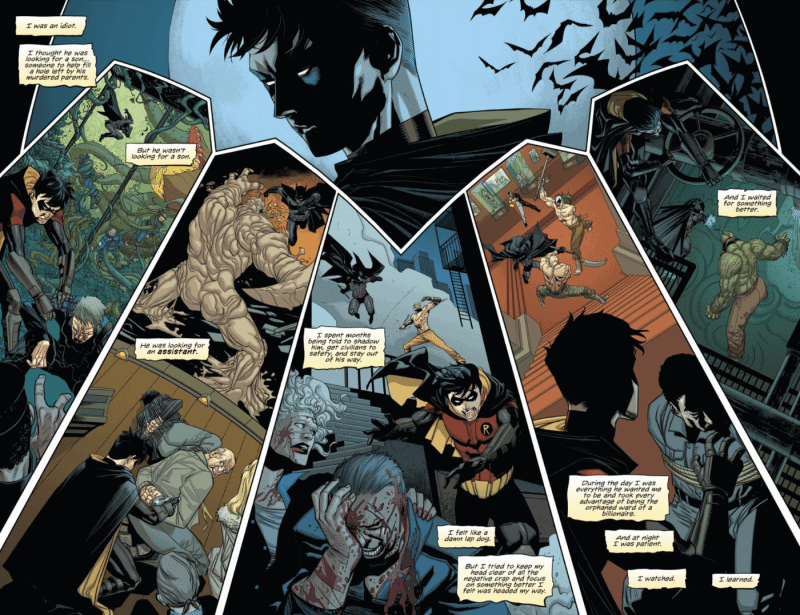 It is not all doom and gloom for this issue, though, as I thought the artwork was exceptional. There are a handful of panels, most notably the cover, that truly blew me away. The cover depicts the Arkham Knight taking on his mask, to reveal a screaming Jason Todd beneath, Robin mask and all. It is a spot on allusion to the duality of Jason Todd, and how his two personas fight for control of the other. As a result of this panel, I believe that the Arkham Knight will eventually turn around, and become an ally to Batman. While he speaks of him in a generally negative light, I can’t shake this feeling that deep down what Todd wants is redemption, not revenge. 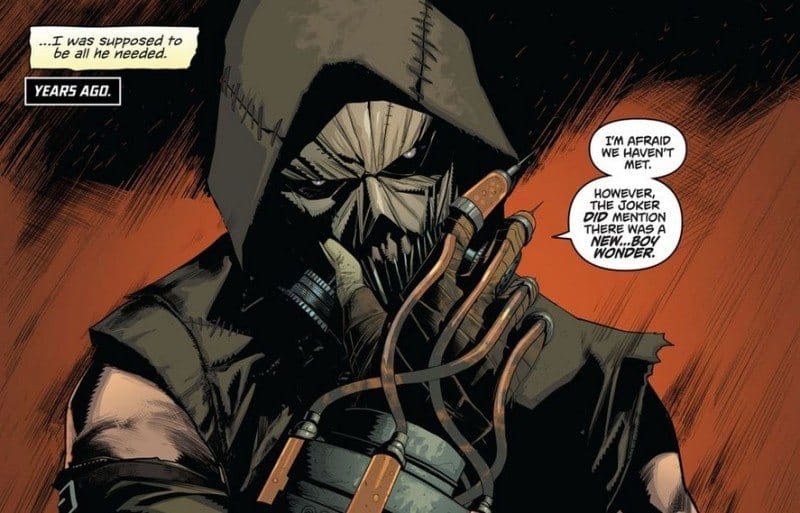 Overall, I ultimately found myself disappointed by the second issue of the BATMAN:ARKHAM KNIGHT GENESIS story. The retrospective narrative is the strongest component of this series, which remained true in this issue. To me, the best scene of the issue was an interaction between Alfred and Jason Todd. Alfred attempts to open a car door for Todd, to which he refuses, and then says ” Alfred, stop with the butlering already. I’ve told you a dozen times, I can do it myself.” I think that this particular scene speaks volumes about the nature of Jason Todd: while his unwavering pride is perhaps his greatest strength, it is the flip side of that coin — his impenetrable stubbornness– that is his biggest weakness, and what ultimately leads to his downfall.

Other than that scene, I felt that this issue lacked the emotional depth that made the first issue so strong. That fact, coupled with the lack of progression in the plot, made this issue seems almost purposeless. Other than the detail that Deathstroke is working for the Arkham Knight, BATMAN: ARKHAM KNIGHT GENESIS #2 does very little to push the plot forward. 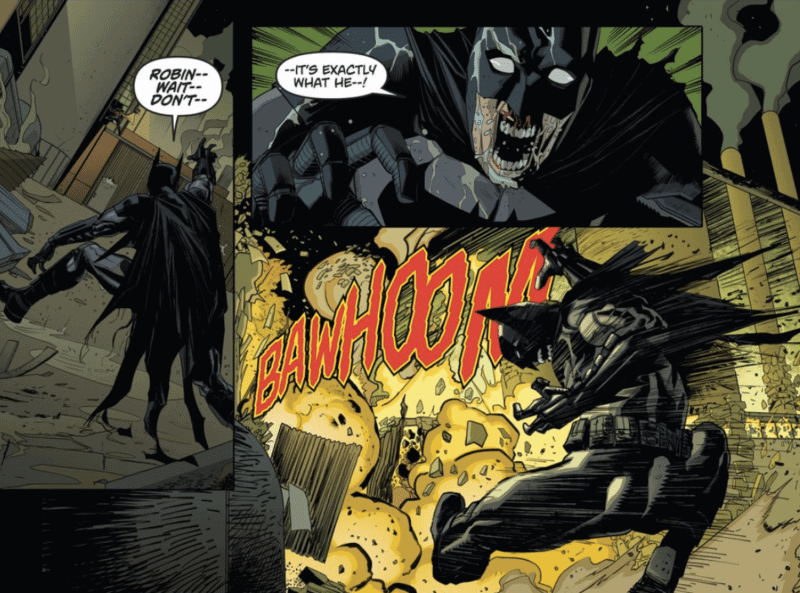 While I found the first issue to be significantly more emotionally layered and plot driven, the second issue of BATMAN ARKHAM KNIGHT: GENESIS does just enough to keep me engaged with the story. I will definitely be picking up issue #3, as I expect it to find the right balance of retrospecting and advancing the plot forward. Ultimately, this series is focusing on the tragic relationship of Bruce Wayne and Jason Todd, which so far, they have nailed. Jason Todd’s death is Batman’s greatest defeat, and fleshing out the origins of the two is something I find to be remarkably compelling.