BATMAN ANNUAL #1 celebrates the feel-good holiday spirit in Bat-fashion. The annual tells five stories from acclaimed writers, from both classic and new eras of Batman. Each writer is also accompanied by notable artists who beautifully portray each of the winter themed tales. The writers and artists attached to the 42 page annual are enough reason to get your attention and to add to your holiday comic wish list. But if you’re still debating whether you’ve been naughty or nice, we are here to give you an in-depth look at each of the stories. 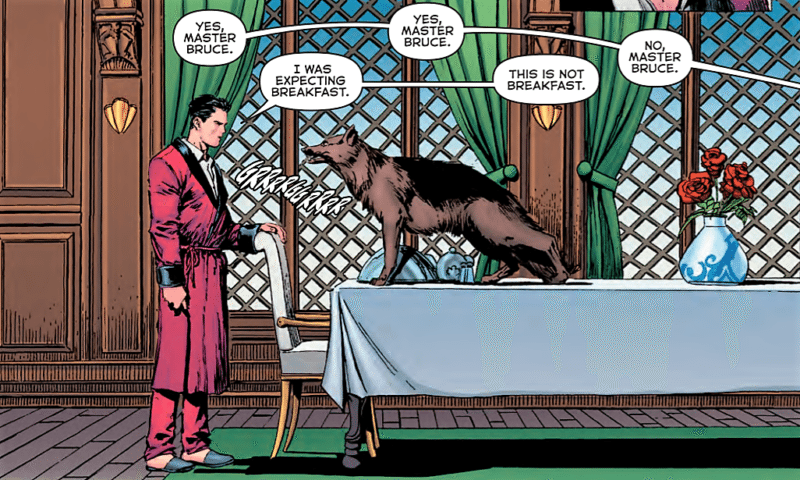 BATMAN ANNUAL #1 opens with work from the current writer of Batman, Tom King, and artist, David Finch (who also did the amazing cover for the annual). King crafts a new origin for the lovable Ace the Bat Hound, an angry pup who was left behind by the Joker and with time found a home with the Bat family. Ace’s new origin is quite touching as it’s reminiscent of the struggles of young orphaned Bruce, since Bruce was once lost and felt anger, only later to be guided by Alfred’s nourishment and care. In the same manner, King builds a quite charming relationship between Ace and Alfred, with Alfred’s goal to show Bruce how the broken dog can be tamed and loved. You slowly see Ace’s transition in panels where Alfred refuses to give up training and caring for the hound, as if Ace was Bruce himself.

The pencil and ink from David Finch in this tale are praise worthy. Finch perfectly captures the anger and despair of Ace when he was left to rot, with vicious eyes and teeth.  Finch’s work and the colors of Gabe Eltaeb also give life and warmth through the pages as the bonding between Bruce and Ace builds by Christmas time. Ace becomes the perfect Christmas gift for Bruce, without him even realizing this. This light-hearted tale with dark roots builds a perfect doorway to the rest of the annual. 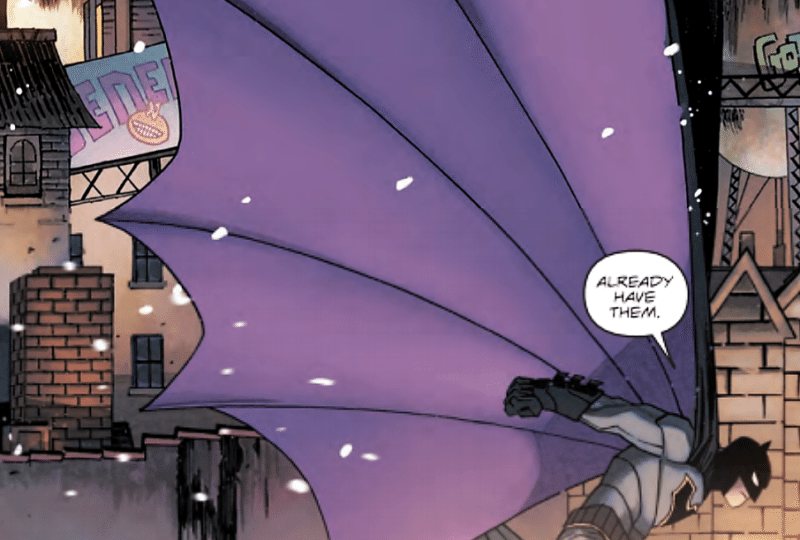 The next story in the annual is from writers Scott Snyder and Ray Fawkes. This tale begins in Snyder fashion, with background information on how the emergency calls in Gotham are rerouted through the Bat computer. Batman notes how “There are no silent nights” in Gotham, but he’s surprised to see a different outcome when suspicious characters appear among Gothamites. Batman is often paranoid and always suspects the major threats in his city, so it’s uplifting to see him crack a smile when there’s no alarming danger, even if it’s for a few moments. This story depicts a more hopeful Gotham City while it’s covered by the holiday snow. Although it’s a city filled with endless crime, there are a few peaceful pauses that can put a smile on its civilians, and even on Batsy’s face.

Artist Declan Shalvey and colorist Jordie Bellaire seem to outshine the script, detailing how the characters move and painting a gloomy atmosphere of a snowy night. The last page of this tale (as seen above) is quite memorable as it beautifully captures a soaring Batman, highlighting the purple cape, into the night. Notice how the background details are illuminated by city lights with the added touch of falling snow. Although there seemed to be no threat at the time, the caped crusader is then alerted about another emergency, closing out the tale with an epic full page art, as he soars out to investigate.

The (Not So) Silent Night of the Batman Harley Quinn 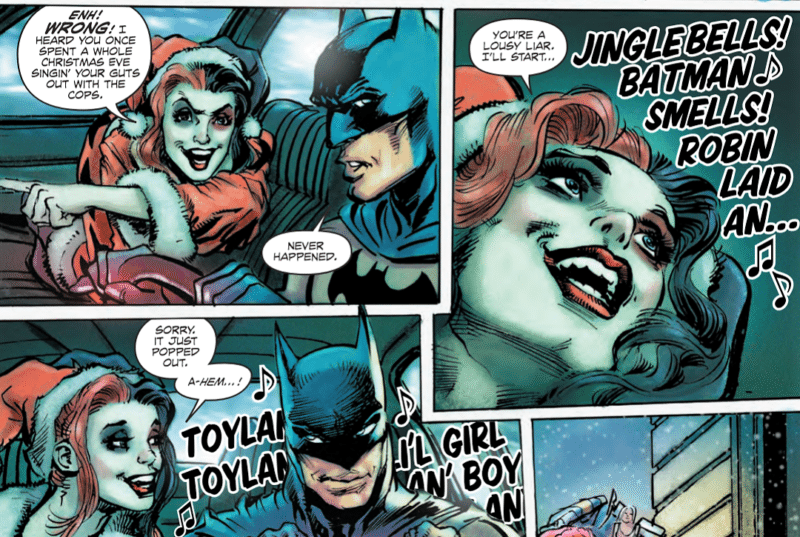 Although the annual is short on big cameos, you’re treated to a jolly ride with Harley Quinn and Batman. Paul Dini, the beloved co-creator of Harley Quinn, writes this script centered around Gotham civilians while Bats and Harley goes for a ride in the Batmobile. Harley, now a little less crazy and mostly admired by Gothamites, masquerades as Santa before the Bat catches her. Along with the X-mas jingles expressed out loud by Harley, this is the most fun and holiday centered story in the annual. Dini portrays a stronger, braver Gotham where its people take part in protecting themselves from petty crime. Although Christmas has arrived in Gotham, Dini shows that crime is still ever present in the city. But perhaps with the spirit of the holidays and the Bat (and even Harley), Gotham’s finest citizen are capable to endure a bit longer.

READ: Find out the importance of Foster Parenting in BATMAN and SUPERMAN!

The art of Neal Adams is refreshing, as Batman is seen with his blue cape and cowl, with the external underwear painted for the story. Harley Quinn also dazzles with her red jester and combination of Santa outfit. Although certain panels where Gothamites act to stand up for themselves seem a bit muddled and rushed, the overall script is heartwarming. Harley Quinn’s holiday spirit is so infectious that it rubs off on the panels, and even a bit on the brooding Bat. 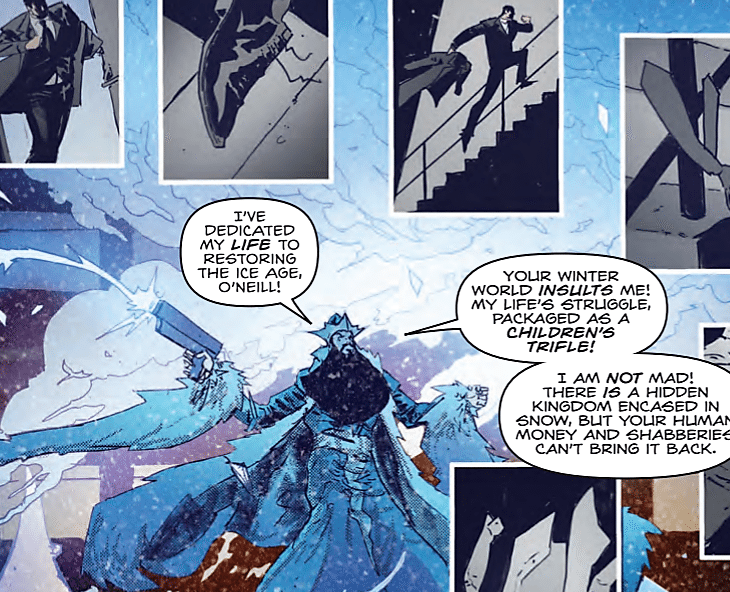 This fourth tale in BATMAN ANNUAL #1 is the darkest of the jolly bunch. This isn’t necessarily a negative remark, since the story’s darkness perfectly blends in this overall collection of light-hearted shorts. Writer Steve Orlando introduces a laughable winter based villain from the 40’s, only to be swiftly taken out by Bats, but the short doesn’t end there. Orlando touches the subject of death and we see how vulnerable it makes Bruce feel. As Bruce narrates, you are treated to the presence of a haunting figure said to return next year. This very well could have been its own stand alone issue or even a mini series as it feels like a teaser more than a holiday tale. But a touch of darkness is expected and even gives this collection of tales more perspective since it is the Dark Knight we are reading about.

The art for this story is perhaps the most stunning to look at from the overall collection. Riley Rossmo’s pencil work is very clean and smooth, portraying action sequences with such eloquence. Colorist Ivan Plascencia beautifully captures the winter of Gotham, further illuminating the characters with vivid colors. There are some gray mini panels thrown in where Bruce is seen stripping his clothes to change into Batman. These types of art and mini panel decision making is exemplary since it further expands the story from generic depiction of action scenes to a higher art form. The overall art and story of Stag will not fill your winter heart with warmth and tune, but it will strike you with the art and excite you for another villain to join Batman’s rogue gallery.

The final tale of this holiday collection is a bit of a mixed bag. Writer Scott B. Wilson successfully grabs a hold of you at the beginning with an interesting villain who escapes from an Arkham holiday party (Yeah, Batman thought it was a bad idea too) for its inmates. Batman also learns the inmate is associated with Scarecrow as he plans his strike. The caped crusader however appears to talk (like a lot) his enemies to surrender instead of lifting a Batarang. The use of an eccentric villain as well as Scarecrow is wasted, as the last panels are filled with speech bubbles from Batsy. A much quieter Batman, letting the art speak for the action, would have sufficed for the story telling.

Although the story falls a bit flat, the art again is remarkable. Artist Bilquis Evely handles character’s faces and expressions masterfully, as mini cameos of some Bat villains can be seen in certain panels. Mat Lopes colors, which differentiates two character’s settings with light and dark is to be applauded. The holiday spirit is too little to be satisfying in this tale but the promising art succeeds over an anticlimactic tale of Batman in a snowy night. 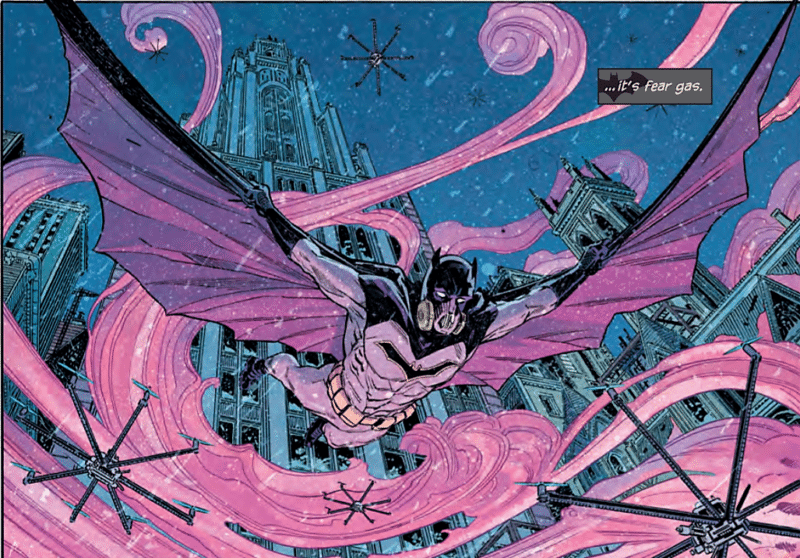 The overall annual captures the snowy, dark nights of Gotham and its Batman, while treating you to some heart-warming tales. While certain stories leave a better impression than others, the artwork from the various artist of the annual seems to shine here the most. BATMAN ANNUAL #1 is beautiful to look at, but it also serves as proper holiday themed storytelling for a not a so jolly character. From lifting your holiday spirit to a breaking new hound origin and even giving you a taste of what’s to come, it is indeed a gift that came early this holiday.