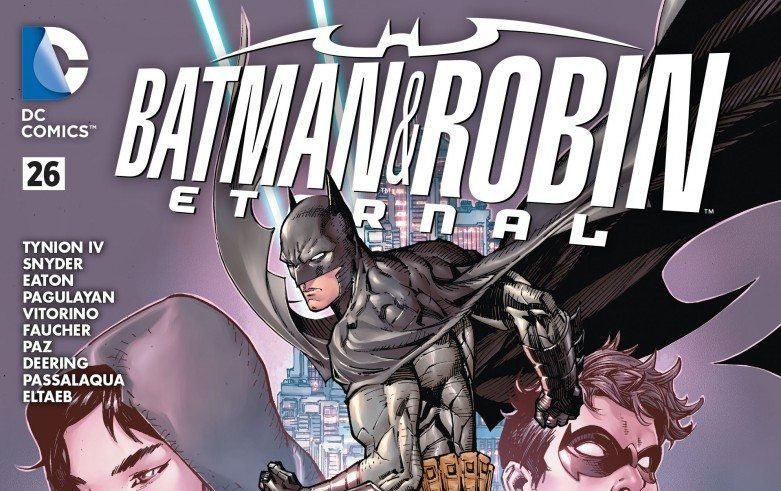 BATMAN AND ROBIN ETERNAL #26 sees a decisive conclusion to the Mother story arc that’s been happening over the course of this book. Harper decides whether to kill Cassandra or not, and Mother reveals a backup plan to counter the success of Team Robin.

At times, Mother was not always the best-written villain; too often she fell into some of the tired villain clichés of the hand-rubbing criminal hellbent on ruling the world. Though, when she was written to her A-game, she had a lot to offer the Batman mythos. Her grand scheme may be forgettable and regrettably bland, but where Mother succeeded was in providing us a position to observe the relationship between the two mantles of Batman and Robin and how those two mantles exist outside of the individual characters that inhabit them.

LISTEN: Got a second? Hear what we had to say about Scott Snyder’s Batman in Episode 67 of the ComicsVerse podcast!

Scores of Batman books and films have taken time to analyze what Batman means outside of Bruce Wayne. What does he stand for? Who can he be and who does he want to be? It’s something that has been studied countless times by countless writers, and, each time, the questions are proposed by bringing in a villain that pushes Batman into these existential territories. 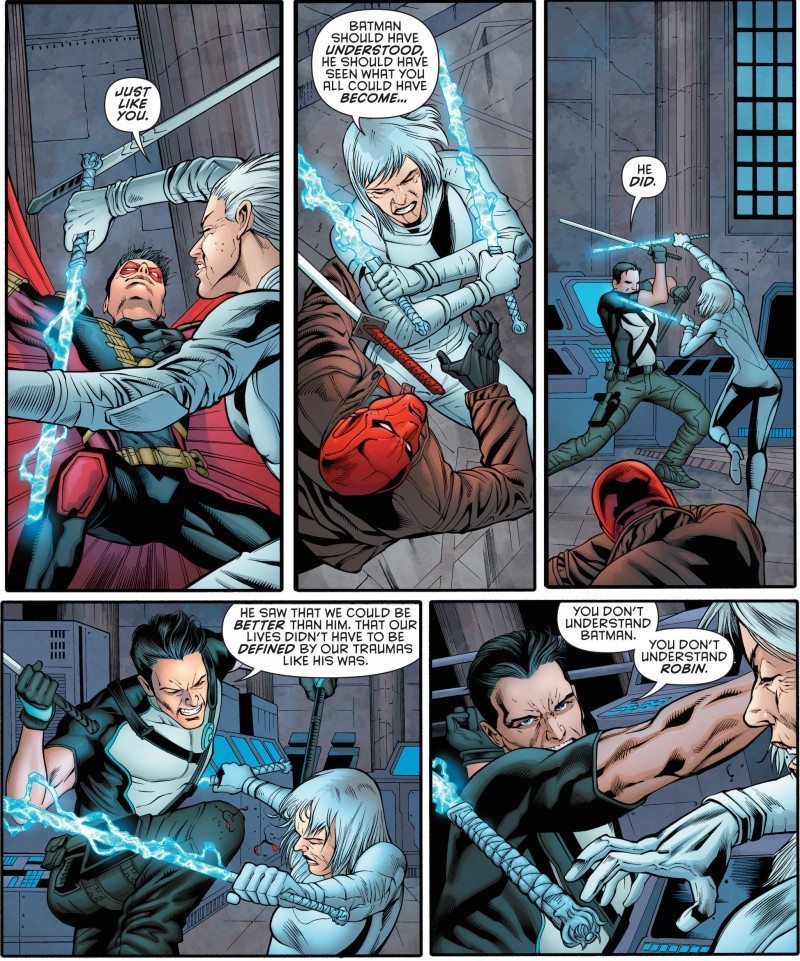 Robin, for as long as the character has been around, hasn’t been given nearly as much observation. The mantle has always been defined as a sidekick position. That’s what changes in BATMAN AND ROBIN ETERNAL. James Tynion IV and the rest of the creative team ask, “What are the definitive traits of  the Robin mantle?” and “Does Robin even exist outside of Batman’s shadow?” Sure, some Robins have led the Teen Titans, but even so, the actual role of Robin itself has always existed somewhere next to Batman, even if the characters inhabiting it don’t. Mother’s character provides us with a means of addressing these questions. She pushes the Robins to doubt themselves not only as a team, but as individuals. If Batman can’t even beat her, how can they? They are only sidekicks, after all.

But BATMAN AND ROBIN ETERNAL tells us that the Robin title doesn’t have to live in the shadow of the Bat anymore. The entire team was able to overcome Mother and finally assert that the Robin mantle is more than Batman. When Dick Grayson abandoned Robin for Nightwing, it was largely seen as him liberating himself from Batman’s shadow. He was, but it further reinforced the notion that Robin as a role is strictly tied to Batman. Again, he had and always would be the sidekick, regardless of who inhabited the role. In BATMAN AND ROBIN ETERNAL, by bringing most of the former Robins back into the fold, their defeat of Mother liberates the Robin mantle from Batman and makes strides in defining what the Robin mantle stands for. Having them come back said that, regardless of who they became, each character that had been a Robin was still a Robin at the end of the day, but that doesn’t diminish their power. 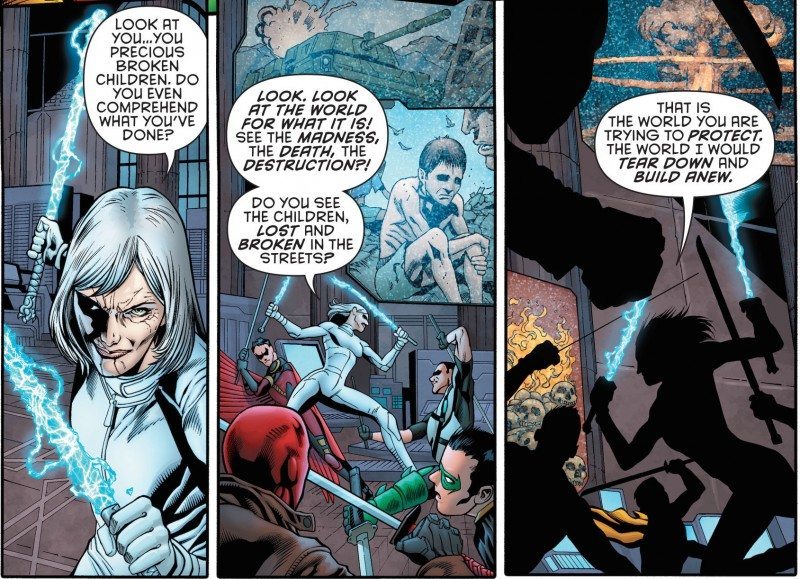 Mother’s role in this is that she sought to militarize the children of the world, the same as, one could argue, Batman has with his many Robins. Her scheme is a direct critique at the value and importance of Robin. She positions the Robins as subordinates of Batman in a manner similar to the way that her children are subordinates of her. The Robins’ ultimate defeat of her is a rejection of this criticism and an embrace of the innate power that comes from holding the Robin title. Mother’s downfall can be seen as a vehicle for the Robins to step out in their own right to begin examining who they are as heroes apart from their past legacy as sidekicks.

READ: Get caught up on last week’s BATMAN AND ROBIN ETERNAL #25

Maybe that’s why the art is not so important. BATMAN AND ROBIN ETERNAL has had a slew of writers come onto the title, and each time, regardless of the talent, it has always been serviceable. It isn’t ever bad, per se, but it seems obvious that the goal of this book wasn’t to dethrone Jack Kirby or Alex Ross. Scot Eaton and the rest of the art team do good work with no noticeably bad work, but no noticeably great work either. The focus of this book isn’t to change the game, though, it’s about telling a fast, weekly story that challenges the ideas of what the role of Robin is.

BATMAN AND ROBIN ETERNAL doesn’t exactly give us an analysis of the Robin title so much as it provides a stepping stone for other writers in future books to do so. It would have been a monumental task for the team to not only separate the idea of Robin from Batman, but also give a deeper examination of the mantle. Instead, by opening the door to new explorations of what it means to be Robin, BATMAN AND ROBIN ETERNAL expands the possibilities of a role that many had thought was already figured out and gives it new stories worth telling.