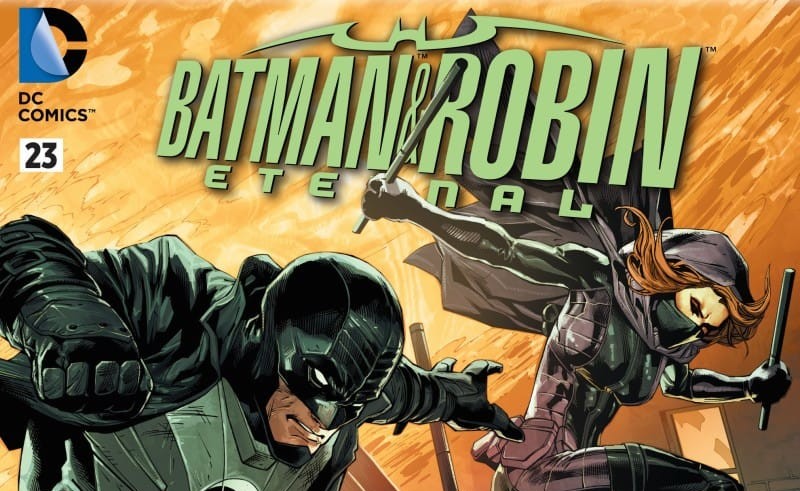 If last week’s BATMAN AND ROBIN ETERNAL #22 was a slow-moving character-centric issue, #23 swings the proverbial pendulum to the complete opposite side to give us a tight-knit, action-oriented issue. There’s not a hint of hero brooding here, as James Tynion IV and Scott Snyder are too busy setting the stage for a global faceoff against Mother and her army of brainwashed youth.

READ: What Happened Last Week in BATMAN AND ROBIN ETERNAL? We’ve Got You Covered

BATMAN AND ROBIN ETERNAL #23 picks up right where #22 left off. The Robins have a plan this time, but they can’t do it alone. They recruit some friends and “persuade” some foes to help them bring down Mother, but none are as welcome as Midnighter. Who do you call when you need instant global transport and a razor sharp strategic mind? Midnighter. He’s brought in to serve as the team’s Oracle on the sidelines, which is probably best given that they’re fighting children, not blood-bursting monsters or gangsters. Even though they had to tone down Midnighter to prevent this book from getting slapped with a Mature rating, Tynion IV has a good grasp on the character. Thankfully, Midnighter maintains his coy innuendos and flirtatious teases throughout the issue.

In fact, it’s his interactions with Dick Grayson that stand out as one of the highlights of BATMAN AND ROBIN ETERNAL #23. During the solo Midnighter run, Dick crossed over for a few issues and their chemistry on the page was absolutely frenetic. Tynion IV brings a lot of that same playful brashness to an issue that sorely needs it to keep its high stakes from overwhelming the story.

It helps as well that he isn’t afraid to give BATMAN AND ROBIN ETERNAL, as a book, the scope it needs to deliver. If last issue felt small and intimate, this issue feels like its broadening the scope again. We see that Mother’s mind control scheme has gone global. Batgirl is in Paris, Damian is in London, and Dick is in the Arctic Circle. Setting large panels like these back to back lets us really get a feel for the immediacy of their mission because it feels grander than Gotham City. Rather than letting this enlarged scope become overblown, Tynion IV, Snyder and artist Christian Duce give a little breathing room through Midnighter’s command center.

LISTEN: Got Time? Listen to on of ComicsVerse’s DC Comics Podcasts

Bringing in Harper’s little brother, Cullen, this big climactic setup gets a good injection of intimacy to keep readers from coasting too quickly through the book. Duce executes this adeptly in his Midnighter command panels. In the scenes where the story cuts to Midnighter, there are lots of close-up shots squeezed tightly together. It’s personal, but it doesn’t disrupt the flow of the issue. An artist that understands how his work affects pacing is a gloriously rare creature, indeed. 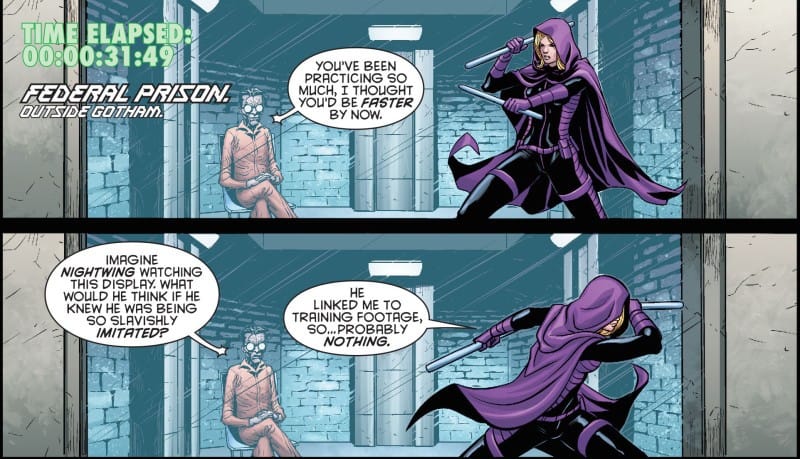 If there was one weak spot it would be Spoiler’s encounter with Scarecrow. It was a nice altercation on its own, but in an issue that had as much immediacy as it did with the plot, it just felt unnecessary. It would have fit in another issue, but since we didn’t see Spoiler anywhere else, it felt a little awkward to bring her in for a character moment in an issue dominated by large, beating action. It didn’t detract too much from the plot, though, and it was easily forgotten until I went back again to write this review.

Delivering another strong issue, Tynion IV and Scott Snyder have shown that they have a pretty great understanding of the dynamics of the Bat Family, something that I don’t feel is as prevalent in Snyder’s flagship BATMAN book. BATMAN AND ROBIN ETERNAL #23 gives you a good idea of what DC should be looking for in their stories. There’s drama, but it’s not overwhelming. There’s humor, but it’s not without due context. Most importantly, though, there’s a strong element of fun to this book. BATMAN AND ROBIN ETERNAL #23, like every other BATMAN AND ROBIN ETERNAL that Tynion IV has written, never stops being a fun action-adventure. That’s something to keep in mind as DC brings about its new Rebirth changes in the coming months.