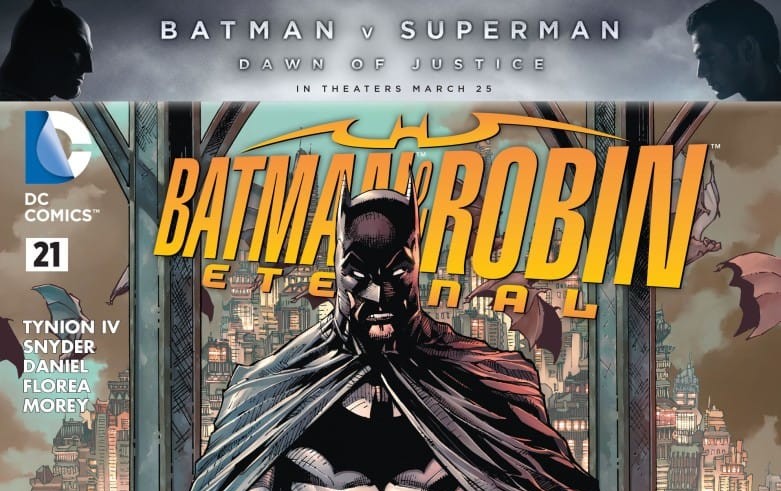 Batman goes back to Cairo to make sure there are no loose ends after the battle with Mother and Orphan. While overseas, he winds up in Eastern Europe at a mansion owned by a little old lady who has a connection with Mother. It is there that Bruce Wayne finds out Mother’s origins. 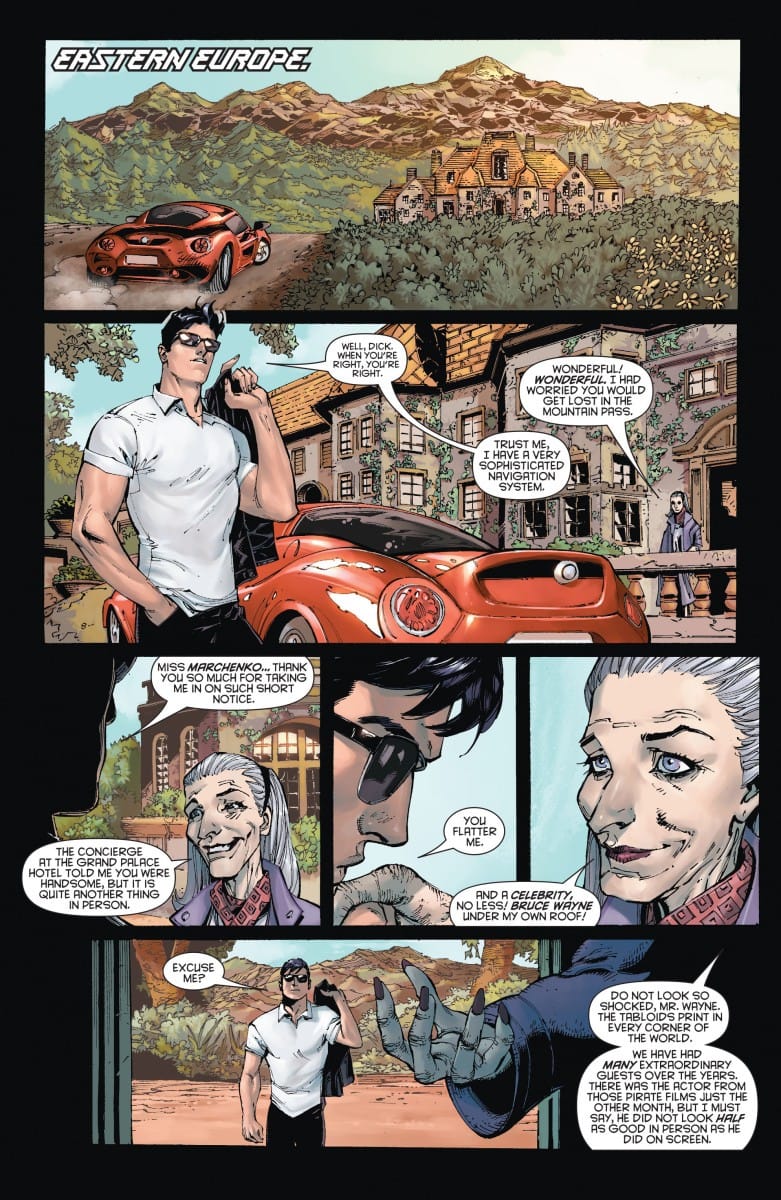 Reading this comic sent chills down my spine. There was a scene where we see Batman hanging a man upside down from a building, which was nice because we haven’t seen him do that in a while, showing how dark the dark knight can really be.

The writing gets 5 stars because of how the creators are able to make comparisons between the hero and villain by giving Mother an origin that is somewhat reminiscent of Batman’s. Tynion studied under Snyder before entering into the comic book industry; they make a good team to tell this story because their writing styles are alike: dark, scary and memorable. Snyder is well known for creating heart-pounding stories in the BATMAN series, as well as in his own comic book WYTCHES. Tynion follows in his footsteps by creating similar stories like THE WOODS.

This issue doesn’t take off from last issue, but instead takes place in the past from Batman’s perspective. We learn about who Mother is and how she came to be. It’s a sad story, almost like Bruce Wayne’s origins, but much darker. Bruce can’t help but feel that he is not only responsible for the death of Harper Row’s mother, but also for molding Robin into the man he is today. He contemplates about how his tragedy and Mother’s are so similar that he begins to question if what he’s been doing with Robin is wrong. If Batman continues to take in children (which he has done more than enough times) and turns them into Robins, then Mother would be right. “The world would be turning the way she always thought it would be turning. That we must rip children away from their limitations with violence, so they can become something greater,” Batman says.

READ: Miss last week’s issue? Catch up here with our review of BATMAN AND ROBIN ETERNAL #20!

After taking in the first Robin, Batman realizes that he can’t continue turn a child to a life of crime fighting. This didn’t stop him though. Why not? Hopefully this will be explained in further issues, but I don’t think we needed a villain like Mother to help Batman realize that he shouldn’t keep adopting children. Haven’t these kids realized that by taking on the role of Robin, they’re putting their lives at stake? This strikes me as alarming. I guess if he’s a billionaire then he can do whatever he wants.

Then again, by adopting these kids, he set them on the path of justice. He gave each of them the chance to do something with their lives and change the world for the better, and some good things have come out of his decision already. Dick became Nightwing and was a founding member of the Teen Titans. Jason had a crew, Red Hood and the Outlaws, that did some good as well. Tim went on to be Red Robin and also lead the Teen Titans. Damian is currently seeking redemption in his own comic book series, ROBIN: SON OF BATMAN, for all the horrible things he did when he was under the influence of the Al Ghuls. So, a lot of good did come out of this.

Artist Tony S. Daniel, who has come and gone throughout this series, returns to pencil the cover and panels of this issue. Mr. Daniel is one of my favorite BATMAN artists. He draws with superfluous ease and great detail. Newcomers Sandu Florea, inker, and Tomeu Morey, colorist, also help to make this issue so perfect. The art of this comic reminds me of the first issue of this series, not only because Daniel was on the issue, but because the inking and coloring give off that dark tone that BATMAN comics are so well known for. The artists are able to set the tone of the story by giving the characters a fluid motion that makes them seem as if they’re alive. In this way, the artist allows us to relate with what they feel, which adds to their liveliness. 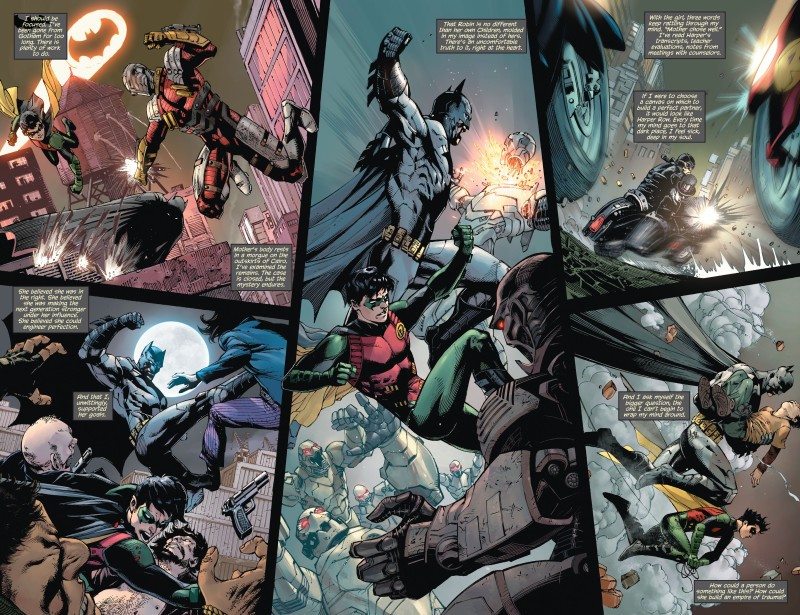 Characterization, which is crucial to any story, is also given 5 stars in this issue. We see Batman in a rare state of uncertainty. Always so sure of himself, he begins to think about the choices that he’s made that affect everyone around him. Seeing Batman in a different light (or darkness, I should say) is a treat for viewers. We’re also given a glimpse into Mother’s past. She never intended to set out on the path she walks now, but she’s chosen to do so instead of changing her route like Bruce did. Characters such as these two have so much inner conflict that in the hands of lesser writers, the similarities between Mother and Batman would come off as contrived.

Is it wrong of Batman to have taken Dick, Jason, Tim, and Damian under his wing? I guess it’s understandable in Dick’s case; he witnessed his parents’ death at a young age like Bruce did, but what about the others? Jason’s parents were criminals/junkies, and Tim Drake has parents, who are in witness protection. I can understand Damian being Robin because, you know, he’s Bruce Wayne’s biological son and was also trained by THE LEAGUE OF ASSASSINS.

Was Batman really trying to help these boys by teaching them everything he knows? Or was he making sure that if something were to happen to him he’d be able to rest easy knowing that there was someone there to protect Gotham?  Let us know what you think in the comments!

READ: If you’re a big Robin fan then check out our review of ROBIN: SON OF BATMAN #9!