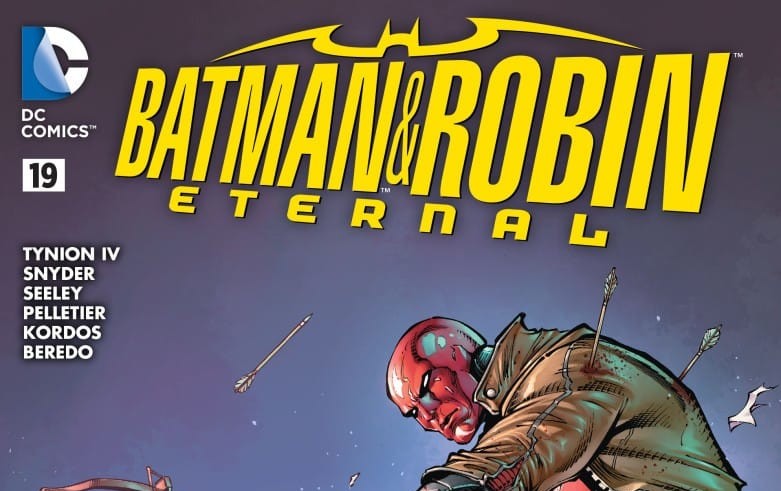 Dick Grayson has done a pretty good job as a teacher at St. Hadrian’s, judging by the cover. This week, the Robins take on all of the students of St. Hadrian’s, as well as Harper, Cassandra, and one of their own, Tim Drake. What you can also look forward to are some awesome fight scenes between fan-favorite characters, like the head of Spyral, Helena Bertinelli, and the Orphan’s daughter, Cassandra Cain. There’s a lot to talk about this week with BATMAN AND ROBIN ETERNAL #19! 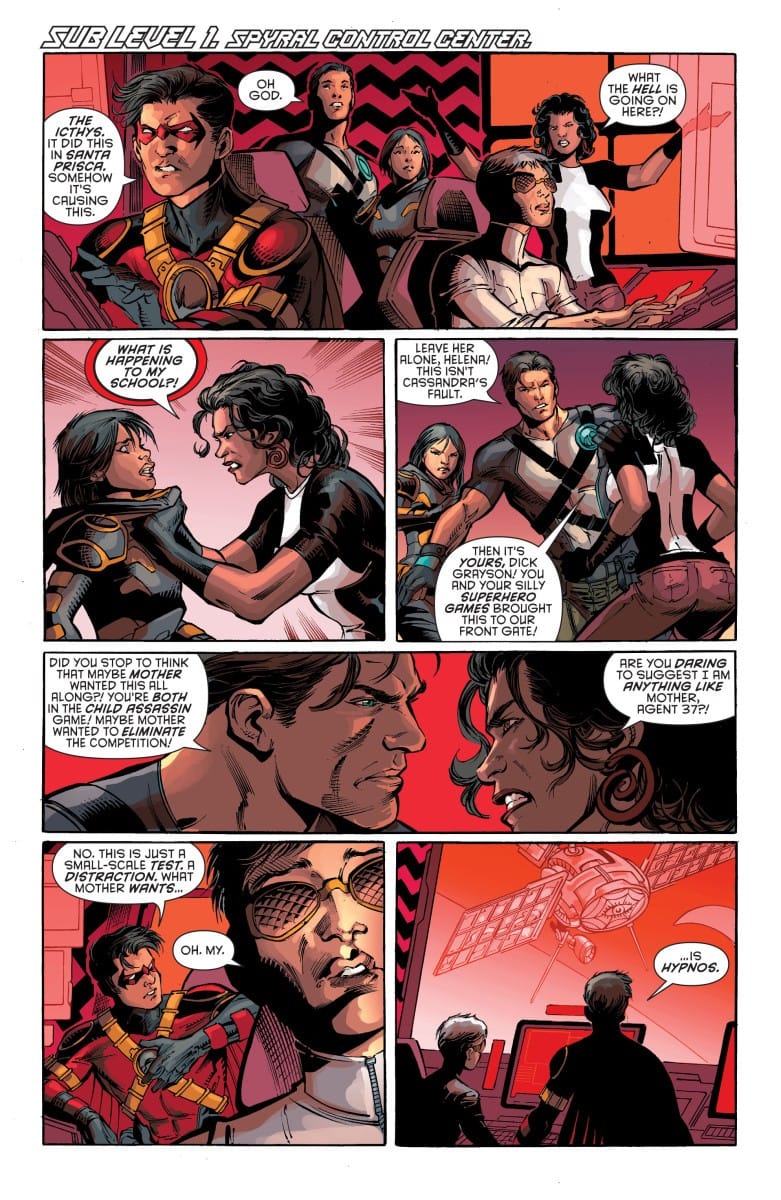 Let’s start off with our artists of the week. We have Paul Peletier on pencils, Tony Kordos rocking the inks, and Rain Beredo splashing his colors all over the pages. I like this team. Why? Because their art styles complement one another. Looking through this book makes me think that just one person does all of the art, when in fact, three people do it. It’s rare to come across a team that can work so well together. It can sometimes take a long time to put your dream team together to get what you want. DC did it, though. They were able to see the potential in how these artists’ work can meld so well together. I tip my hat to them this week and hope to see them again next week.

Our writers, Scott Snyder and James Tynion IV, were slacking a little this week. The story was good with all of the fight scenes that they wrote in, but I felt as if it didn’t progress much from last week. Another thing worth noting is that we weren’t given a flashback this week. Does this mean that Batman stopped pursuing Mother and went home? Unlikely; I think that this week the writers wanted to give the fans a little less exposition and a little more punching and kicking. 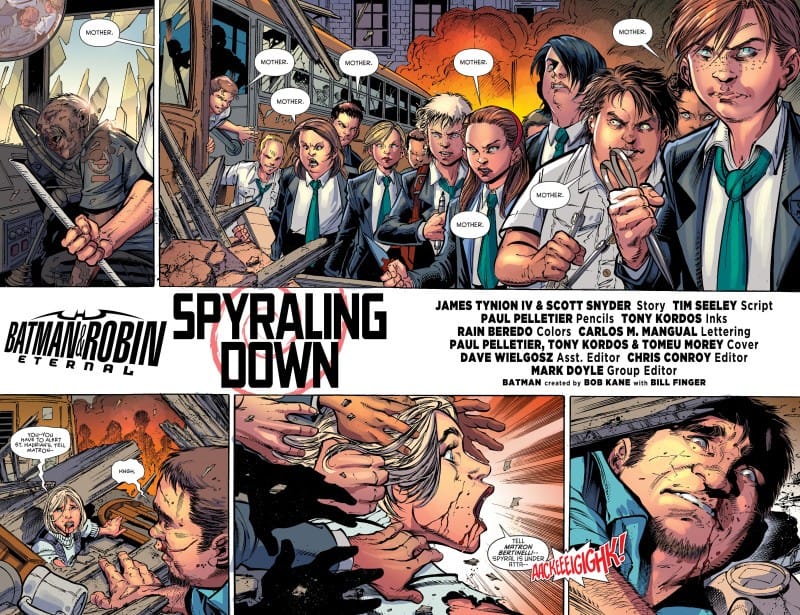 Next week, we’ll be approaching the 20th issue of the series. Most likely the story will pick up from there, and we’ll be back to see what Batman plans on doing with Mother and her children. Overall, what I’m trying to say is pick up this book at your local comic book store. Not only will you be supporting them, but you’ll also be getting a good read with some nice graphics.

LISTEN: Are you a fan of the second Robin, Jason Todd? Then listen to our podcast Episode 53: The Origin of Batman’s Red Hood!

Reading through this issue reminded me of a similar story in BATMAN ETERNAL, when Red Robin, Batgirl, and Blue Bird take on the Mad Hatter. He was using mind control to take over the minds of our heroes, as well as other people, in order to stop Batman and his allies. Sounds similar, doesn’t it? Both BATMAN ETERNAL and BATMAN AND ROBIN ETERNAL were written by the same writers. So what gives with all the mind control? Maybe it’s just a fad, like zombies were back in 2009.

Something else I’d like to talk about is how dangerous of a villain Mother can be. Why is it only now that we’re learning about her? With BATMAN ETERNAL, the writer kept us guessing who it was that had it out for Batman, but with BATMAN AND ROBIN ETERNAL, we’re introduced to a “new” villain who is a danger not just to Gotham but the entire world, and whom Batman seems to have encountered years earlier. If Mother’s influence can only affect kids, then who will stop them? The police sure aren’t going to use as much force as they would if, say, Two-Face and his goons were robbing a bank. I can’t possibly see Superman punching kids in the face or Wonder Woman slashing kids with her sword. Mother has basically created an untouchable army. I mean, who’s going to want to hurt kids?

My question is, why hasn’t she been dealt with already? Did Batman just assume that she had (SPOILER ALERT) died back in Prague several years ago (even though she obviously didn’t)? He isn’t the type of person to be so sloppy as to not go back to the scene of the crime to make sure if she was dead or not. There are so many questions and so few answers – so far, that is. As the story progresses, we will find out everything we want to know, but as of now it’s nothing but speculation.

What do you think will happen next? Is Mother as big of a threat as I believe her to be? Will we see Batman (the Bruce Wayne Batman, not the Robocop one) return in this series? Let us know in the comments below!