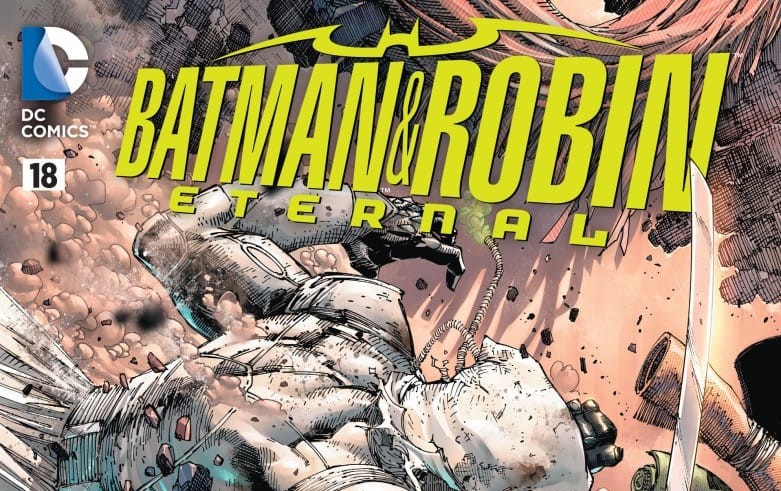 We’ve got a treat for you this week in the new issue of BATMAN AND ROBIN ETERNAL! The gang comes together to discuss just how much influence Mother has over her children. Here’s a hint, it’s bad, really bad. An angry Harper Row lashes out against the contained criminal, Oracle, for forcing Cassandra to kill, but we soon learn the truth of what happened that night in Prague. The battle between Batman and Oracle will seal someone’s fate… someone we know! Help support your local comic book store by picking up this issue right now! 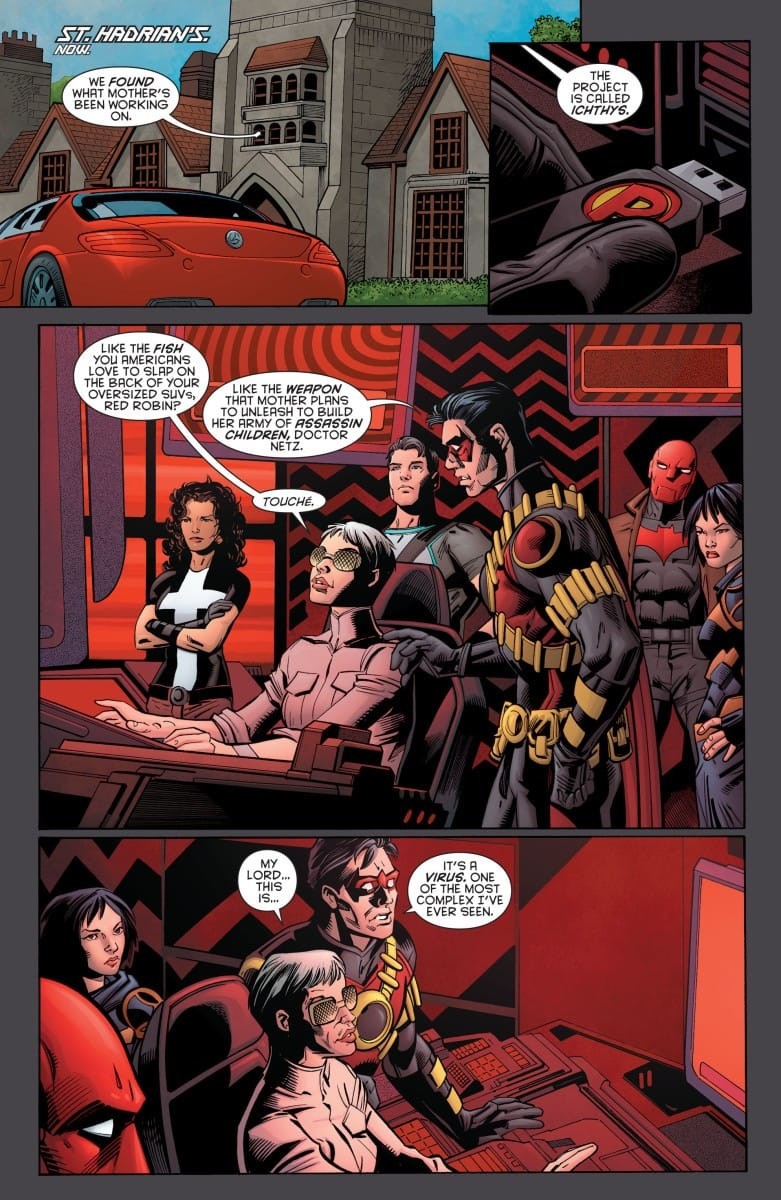 The first thing I would like to talk about is the art. Scot Eaton was last issue’s penciler and I thought he did great, but for some reason, he just didn’t portray the Robins all that well. I wasn’t a fan of the way Dick Grayson was drawn either. Every time we see him, he looks as if he smells something that stinks. Even Red Hood and Red Robin have bland expressions on their faces. They may have appeared in only a few panels, but that’s no excuse to overlook them. Other than those tidbits, the rest was pretty well drawn.

As for the story, it was right on par with previous issues. Scott Snyder and James Tynion IV keep up with their winning streak in my book. Tony S. Daniel, who’s an AMAZING artist, returns to illustrate the cover. Daniel is well known for doing such comics as BATMAN: BATTLE FOR THE COWL, BATMAN: DETECTIVE COMICS, DEATHSTROKE and many more. There’s so much detail in every square inch of his drawings. I often wonder how artists like Mr. Daniel do such a fine job. 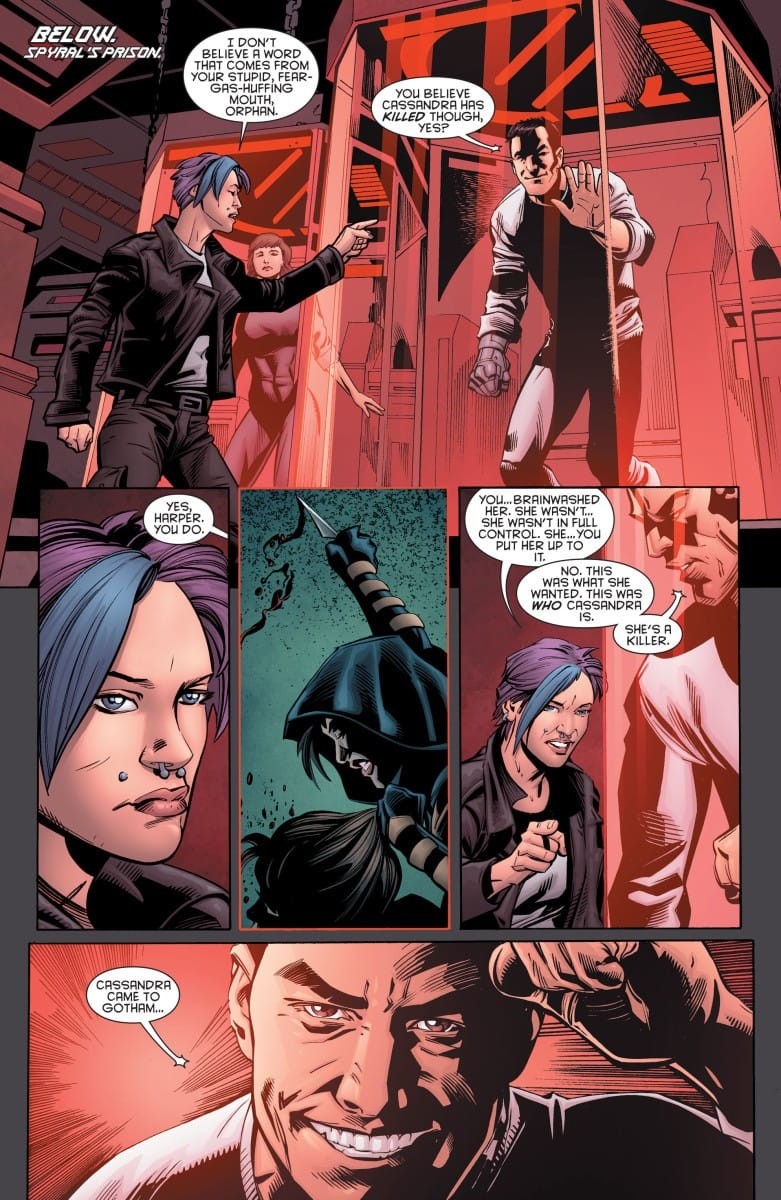 Another key aspect in this story is the type of villain that Mother is. What we’ve seen so far is that she’s a manipulator. She orphans children and scars them for life just so they can be her weapons. What if Mother was involved with the murder of Bruce Wayne’s parents!? That would be a shock, but if Mother were behind that, then Batman would have already been under her control.

Looking at the history of the Robins, some of them were orphans in one way or another. Nightwing witnessed the tragic death of his parents when he was just a kid. Red Hood’s mother was a junkie and his father disappeared after working for Two-Face. Red Robin has parents and became Batman’s disciple on his own. As for Damian, the current Robin, his story is a little more complicated. He was raised by the Al Ghuls. He was taught to never show mercy and to kill his enemies. Then when he met his father (Batman), he was taught to do the opposite of everything he learned.

What I’m trying to say is that Mother does have a point. People who’ve experienced traumatic events at a young age do become stronger, at least in the world of comics. However, does that world reflect our own? We’re left to imagine that one of two things would happen. One, they would grow up to be stronger; two, they would live a life differently from everyone else.

LISTEN: Are you a big fan of the Bat? Then listen to our podcast on the origin of his best friend, Hush!

Overall, I liked this week’s book. It hasn’t strayed off its path like BATMAN ETERNAL did. BATMAN ETERNAL would take place in Gotham with Batman and then the next issue, without any warning, would switch to Saudi Arabia with Red Hood and Batgirl. Instead, BATMAN AND ROBIN ETERNAL switches between the past and present, still telling the same story and not multiple ones which eventually converge. Tell us your thoughts on this week’s issue of BATMAN AND ROBIN ETERNAL! Leave a comment in the box below!