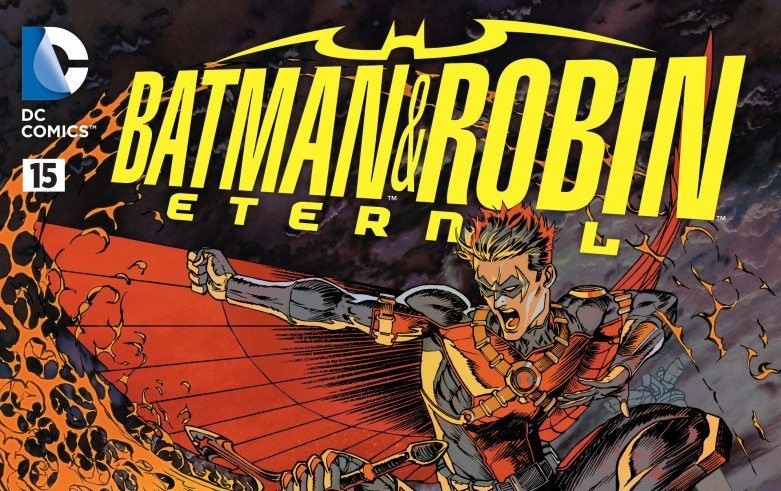 In this week’s issue of BATMAN AND ROBIN ETERNAL, we stray away from last weeks story on Dick Grayson, Blue Bird and Cassandra and focus more on Red Hood and Red Robin. The last we saw of the duo was in Santa Prisca retreating from an outnumbered fight with Azrael and his goons. It’s also worth mentioning that Azrael had gotten his hands on Red Robin and, in a way, fried his brain. Leaving Red Hood to carry him to safety (although jumping out of the top floor of a cathedral isn’t really that safe). In this issue Red Robin has a rematch with Azrael while Jason Todd looks for clues on “ICHTYS”.

The beginning of this story throws us off a bit fore it puts our heroes right in the middle of a desert. The last we saw of them they had jumped into shark infested waters, not leaving a clue of how they escaped after their plane was shot down in the beginning. Another shocking thing that we are shown right from the beginning is Red Robin dragging Red Hood through the desert. Red Robin then offers Red Hood as a token to Azrael for unlocking his mind to show him the truth about the world. What’s up with that? Well, it isn’t revealed until later that (SPOILER ALERT) it was all a ploy to get into St. Dumas and search for “ICHTYS”. A new player also enters the field, the man that speaks to Azrael who only he can hear. It’s none other than St. Dumas himself. He claims himself to be all knowing, a god even, and chooses Red Robin to be his new Angel. Therefore replacing Azrael, which does not make him happy. This is where the cover of the story comes into play. Red Robin vs. Azrael, round two. 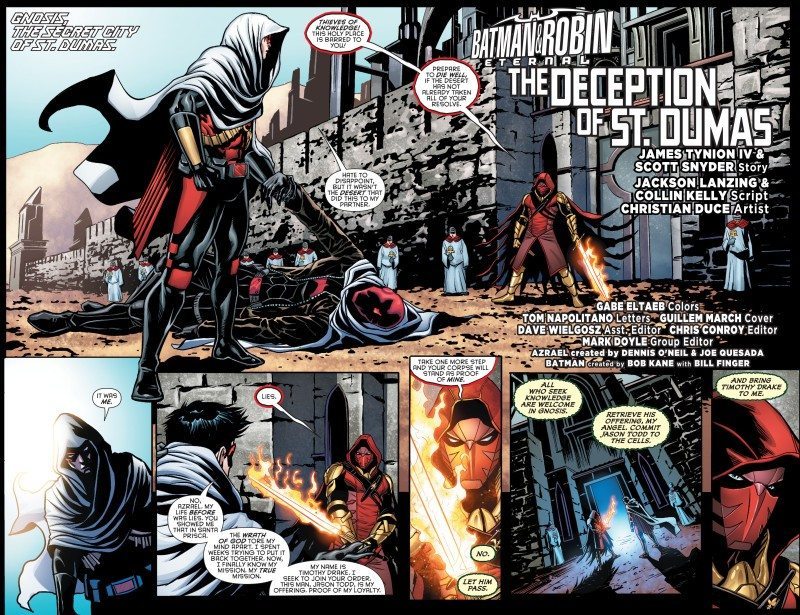 Reading this weeks issue really made me smile. As I’ve mentioned before, the artists change every few issues and this weeks artists were great. Penciling and inking was done by Christian Duce and the colors are brought to you by Gabe Eltaeb. Let’s not forget the cover artist for displaying such vivid detail on our Red Robin and Azrael, Guillem March. As I read through the story, it was very easy on my eyes. I didn’t have to look too hard to see the detail, nor did I breeze through the book in seconds. I was able to read and visualize all that was happening at a steady pace, which all readers should be doing. The artist makes great use of colors and sudden tonal changes in the best way they can when their character is placed in a very dark environment.

LISTEN: Like reading about DC superheroes? Take a peek at our podcast on one of the most underrated characters in comics: Martian Manhunter!

The story was on track with its previous issues following in the same foot steps with flash backs and forwards to tell the story. The writing was brought to us by, once again and most likely for the rest of the series, Scott Snyder and James Tynion. As usual these two writers do a phenomenal job of bringing the story of the bats allies to light. Showing us that these guys aren’t just sidekicks, they’re full-fledged heroes. We can’t forget our scripters Jackson Lanzing and Collin Kelly. These two are responsible for developing our narrative and dialogue which keeps us so delved into this story. Overall, this is a great team and I really hope to see the artists make a return in later issues.

I give this weeks issue a thumbs up for its art, but only half a thumb for its story. Tell us what you think in the comments below. Who will win, Red Robin or Azrael? What is “ICHTYS”? What is it that connects Azrael to Mother? Come back next week to Comicsverse to find out more!