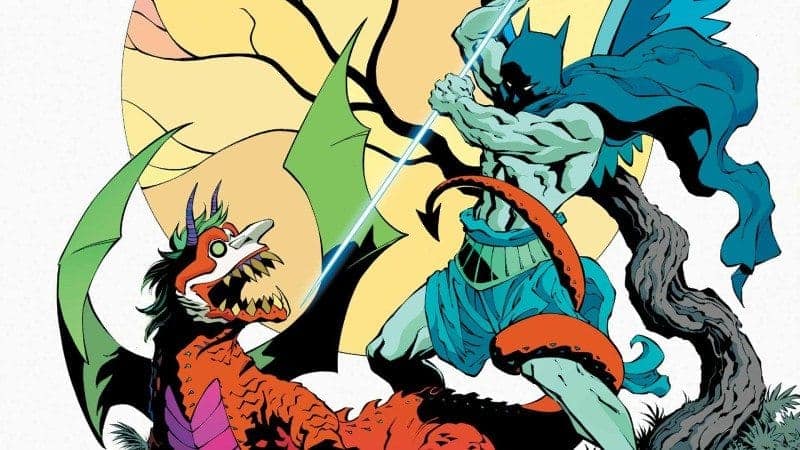 The Dark Knight Vs. The Clown Prince in a final battle to the death. After over 70 years of fighting, it all comes down to a one on one showdown in the caves below Gotham!

This is the setting of the grand finale to Scott Snyder’s explosive “Endgame” saga in the Batman main title series, the latest installment in what has already been a superb run for Snyder. Following the events of Snyder’s “Death of the Family” series (Batman #13-17) Joker returns to Gotham from his seeming demise, now knowing Batman’s true identity. He poisons Gotham with a new “incurable” Joker gas and has Batman and the rest of the Bat-family on the ropes as they struggle to save Gotham and take Joker down.

Batman #40 begins at the very beginning of Batman and Joker’s relationship; Redhood’s fall into the Ace chemicals vat. Batman solemnly wonders to himself how it would have all been different had he been able to stop Redhood from falling, if he had just been quick enough…. The scene then shifts to the present with the Bat family and their rogues gallery fighting through the hoards of infected citizens to stop Joker’s victory parade and obtain the cure to Joker’s toxin. As the Joker mocks Batman crassly mocking the tragic demise of Bruce’s parents, Bane launches Batman to the Jokers float so that Batman may retrieve the “Dionesum”(the cure for the infected citizens) from the Joker’s very spine. However, Joker’s got a trick up his sleeve, and uses a sonic laugh to incapacitate the Bat family and rogues gallery. As Batman kneels as at his mercy, Joker laughs at Batman gloating of his own triumph, revealing that the cure was never in his spine but in a secret well in the depths of Gotham’s caves.

However, this time the joke was on the Joker as  “Batman” is revealed to be none other than Dick Grayson in disguise, (a moment during which Snyder provided some brilliant wordplay). 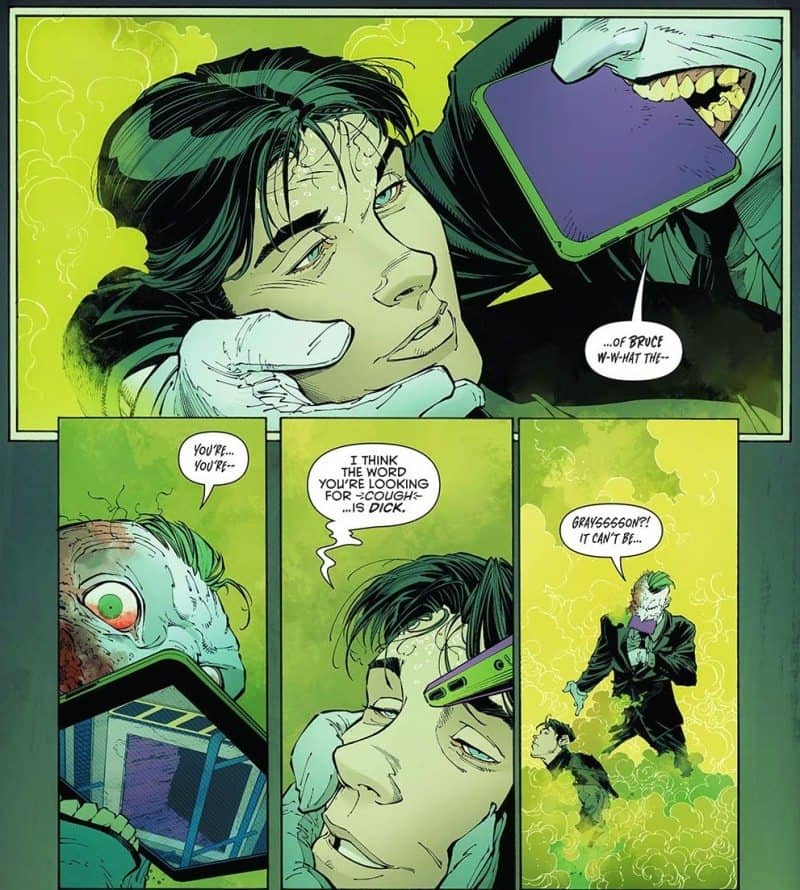 Now knowing the location of the dionesum Batman dives into the caves, finally uncovering the key component for antidote to Joker’s toxin. He triumphantly sending a sample up to the surface to be synthesized into an antidote, to the joy of Julia Pennyworth (Alfred’s Daughter). This victory is short lived however as the bombs which Joker placed in the cave detonate knocking back Batman.

This is where it all hits the fan.

Joker appears in the caves, quickly stabbing Batman in the neck. As they battle, Joker has the upper hand , quickly avoiding Batman’s advances, cutting Batman’s back into a bloody smile.

Snyder clearly prefers the more capable version of the Joker, the clown who can hold his own against Batman’s combat abilities. They fight and banter about the subplot of Joker being an “immortal being” possessing healing abilities from the dionesum imbedded in his spine.

This fight is by far the bloodiest, goriest, most graphic battle in recent Batman history. Greg Capullo, the artist of this comic, took as many liberties as he could in crafting this deadly dance between two titans. One point of note, and one point which both Snyder and Capullo stated as their favorite moment in the battle, was when Batman charged the Joker impelling him with the “ears” on his cowl. 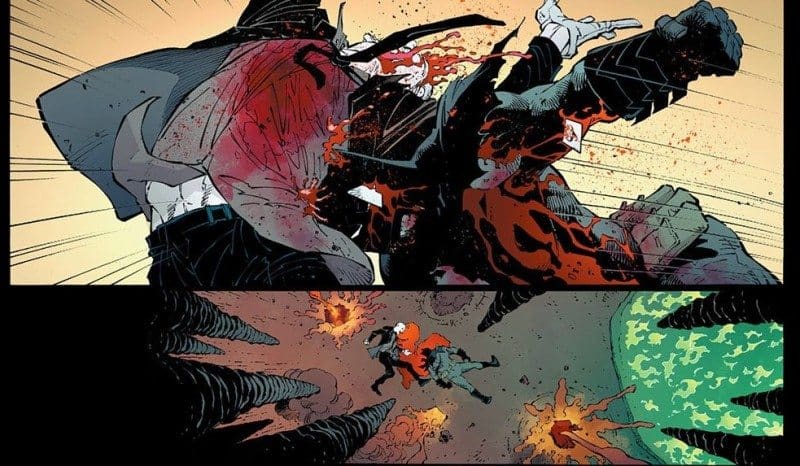 As Batman and Joker lie in a pool of their own blood (aptly shaped like a heart) Joker stirs and climbs atop Batman, knife aloft. Joker utters his final monologue about his and Batman’s long relationship and how he could have made Batman live forever had Batman given into Joker’s will. Plunging the knife towards Batman’s chest, Batman grasps Joker’s arm stopping the kinife as a loose Stalactite falls from the cave’s ceiling crashing down on Joker’s back. As Joker struggles towards the dionesum, (which would heal his wounds), Batman hugs onto Joker “begging” forgiveness for not believing Joker’s backstory of immortality, but in reality just stalling Joker waiting until the cave collapsed into the pool of dionesum, rendering the life giving substance useless. Without the dionesum, both of their fates became sealed as they slowly bled out next to each other as yin and yang, two sides of the same coin. As Batman lies dying on the floor next to his greatest foe, he refuses aid admitting that he was content to “rest here for a little while with (his) friend”.

Back in Gotham, the city has been cured, and mourns the loss of their savior and Dark Knight.  Alfred, laying in his hospital bed devoid of both a hand and a master to serve, mourns more strongly than all.

In the words of Russell Crowe in the movie Gladiator,  “ARE YOU NOT ENTERTAINED?” From start to finish this issue was a rollercoaster of suspense. A cinematic clash between two lovers, one born form chaos the other from vengeance. This was the battle all Batman fans had been waiting for since Joker first reared his painted facade over 70 years ago. But was this REALLY what they wanted?  Now that Batman and Joker have finally died at each others hands, what happens next? This is one of the few times Batman went into battle not having an escape plan, full well knowing that he would most likely not make it out alive, and make it out alive he did not. With both Batman and Joker dead how will the Bat family, the rogues, and the rest of Gotham react? More importantly, how will the writers figure out a way to bring Bruce back from the dead, now that for the first time in a very long time, Batman is dead in a very real way.

In the comic world, death is usually temporary (See the recent Robin Rises: Omega, where Batman travels to Apokalips to revive the “dead” Damian), and while there will always be a way for Batman to rise again, this death feels like it will stick for a while. Seeing as another man has already taken the mantle of the Bat (See Convergence #0 released last week for Free Comic Book Day) it seems that Snyder is going to explore a Gotham devoid of Bruce Wayne for a while.

The “Endgame” saga truly lived up to its name and it potential, providing readers with the one of the best Batman/Joker showdowns since Alan Moore’s “The Killing Joke”. This issue truly underlined the perverse love that Batman and Joker share for one another, and how their toxic relationship was their eventual undoing.

Enjoy your brief hiatus from the comic world.