I’ll give it to Tom King, he knows how to use symbolism to tell really deep character stories. Unfortunately, his style also comes off as a bit pretentious and overly dramatic. BATMAN #23 isn’t bad by any means. It’s quite good, in fact. Yet its depth, like so many of Tom King’s Batman comics, feels forced onto the characters, rather than naturally flowing from the plot. 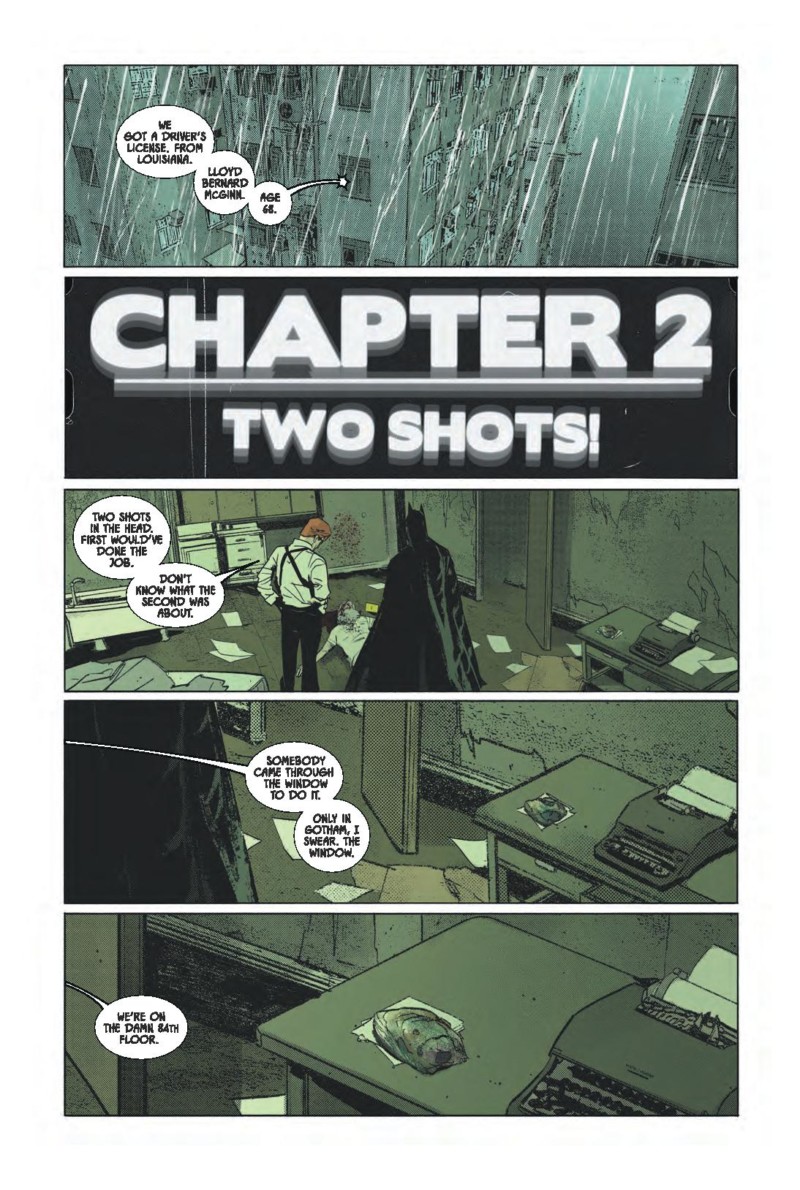 BATMAN #23 follows Batman and guest star Swamp Thing as they try to figure out the mystery of who murdered the plant monster’s father. The story plays out like an old film reel, laid out with black and white title cards and chapter overlays complete with film grain. The whole comic has a retro feel to it, complete with a 1939 style Batmobile and the appearance of Kite Man, a character straight out of the Golden age. This style befits Swamp Thing’s appearance, who himself first appeared in a 1930’s setting. As Swamp Thing and Batman track down the killer, it becomes clear that there’s more at stake than just a murder mystery. The comic neatly draws parallels between the unusual duo’s mutual loss.

READ: Bruce Wayne met his father inside the Flashpoint in BATMAN #22. Read all about the emotional reunion in our review!

It’s nice to finally see Swamp Thing make his appearance in King’s BATMAN. He was initially scheduled to appear in BATMAN #15 but was pushed back to make room for a Catwoman two-parter. Here King embraces the Swamp Thing tone, with the old-school film style creating nostalgic vibes. It’s interesting to examine this comic in the context of other current BATMAN titles. At times I felt like I was reading part two of the current BATMAN/THE SHADOW crossover series. The Scott Snyder book also embraces a Golden Age comic book character, along with a classic murder mystery plot.

King also creates parallels between the murder of Swamp Thing’s father and Batman’s own parental loss. This is especially powerful when you factor in Bruce’s meeting with Thomas Wayne in BATMAN #22. Clearly, Bruce’s encounter with his father is fresh in his mind, and by the end of the issue, it’s clear that Batman has a much more personal stake in Swamp Thing’s quest than you’d usually expect of the Dark Knight. Though King never references the Bruce & Thomas meeting directly, Batman’s uncharacteristic breakdown in the issue’s final pages makes much more sense when you factor in the freshness of that heart-wrenching meeting. It’s powerful stuff, and this is what King truly excels at. 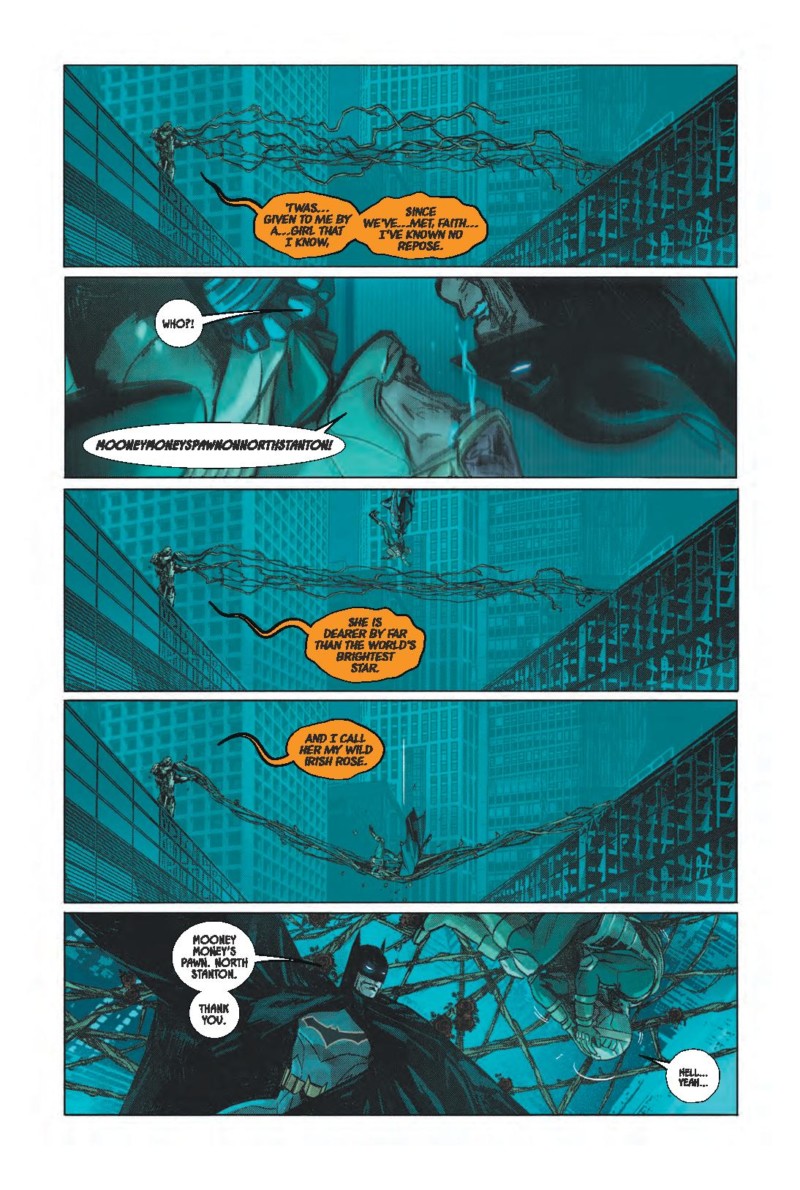 What he doesn’t excel at, unfortunately, is keeping his narrative’s tone consistent. After reading 22 issues of King’s work on BATMAN, I’ve come to believe that his Achilles’ Heel is his dramatic overreach. With King, every single issue is an opportunity for poetic symbolism and philosophical pondering. BATMAN #23 features a poem about life and death. It’s repeated many, many times throughout the issue. Basically, the point is to really lay in the idea that Swamp Thing is a regenerative Earth creature. As such, he can’t quite grasp the concept of true loss. Ultimately, even Batman hopes that the eternal Earth monster can provide him with solace — but he can’t. The life & death cycle would’ve made for a lovely undercurrent and would have come across more powerfully if it hadn’t been repeated via poem a dozen times.

READ: For a similar nostalgic aesthetic, read our preview of BATMAN/THE SHADOW #2, releasing on May 24th!

It feels especially forced when you consider the nostalgic visual tone of the comic. Artist Mitch Gerads wonderfully renders a Golden Age comic book layout. The muted gray colors, the film grain, and the subtle changes in costume and Batmobile design all help to create the feeling of an old detective serial — the kind Bruce Wayne used to watch as a kid. Gotham looks distinctly 1930s, which is atypical of Gerads’ usual work on BATMAN. Yet while Gerads painstakingly recreates a Batman & Swamp Thing comic of old, King stylistically remains stuck in the present. His plot feels right, with the classic murder mystery angle. Yet the over dramatizing, deeply poetic symbolism feels out of place in a book of this nature.

A Golden Age comic book-style predicates itself on good old fashioned detective work. BATMAN #23’s plot has this but, when King does his thing, it throws the reader out of the style he’s trying to emulate. It prevents a full immersion into the 1939 period piece he wants to create. King’s philosophical writing is much more at home in a post-THE DARK KNIGHT RETURNS world. You’d never see his lengthy poetic paragraphs in a Golden Age comic — and that’s the real killer here. It’s a difficult thing to accomplish, trying to transport a reader into another era. Unfortunately, King’s storytelling tendencies are very modernistic.

Ultimately, BATMAN #23 is a good read, but it could have worked better if King had been able to alter his style a little bit. He’s proven capable of shifting his style dramatically in such stories as the Catwoman two-parter, or the first part of “The Button” crossover. Yet King will be King, and this comic offers more of his usual storytelling type. Gerads’ artwork boosts BATMAN #23 considerably, and the two creators always work well together. King is a very talented writer, who excels at narrative poetry. I hope one day he will discover that this technique doesn’t always suit the comic book medium.