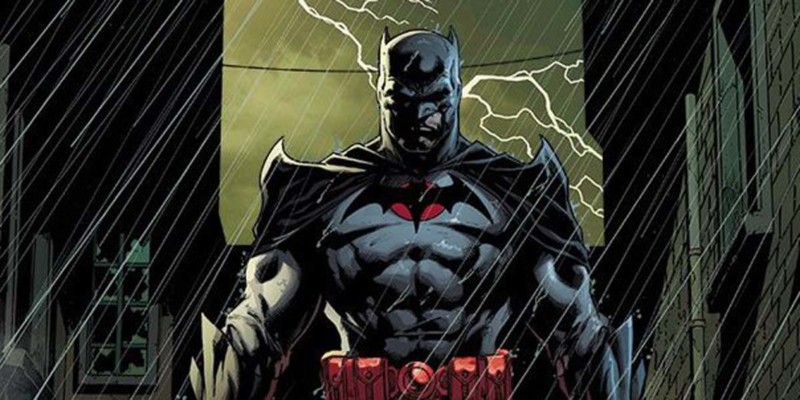 After the heart-stopping thrills of BATMAN #21 and the suspenseful plot-building of THE FLASH #21, this week’s BATMAN #22 gives us a story thriving on pure emotion. This issue marks the very first canonical meeting between an adult Bruce and Thomas Wayne. The result is a roller coaster of emotions that gives fans everything we could have wanted from their reunion, except maybe a hug.

Major spoilers ahead for BATMAN #22

BATMAN #22 picks up a few moments before the conclusion of THE FLASH #21. Thomas Wayne briefly recounts how the Flashpoint timeline continued to exist, even after Barry Allen repaired the damage he created. Batman and the Flash arrive on the scene, just as the agents of the warring king and queen of the Flashpoint, Aquaman and Wonder Woman, send in their troops to kill Thomas. Father and son unite against these trespassing forces. Meanwhile, Flash tries desperately to fix his time-hopping treadmill before the Flashpoint collapses permanently.

The most immediate and obvious draw of this issue is the long-awaited reunion between Bruce and Thomas. In the span of just 20 pages, writers Tom King and Joshua Williamson hit every note you could want from such a monumental meeting. Father and son fight side by side as Batman. Bruce and Thomas share an emotional memory from long ago. The two Waynes finally get a chance to tell each other the thing they’d wanted to most.

READ: Part two of “The Button” saw Flash and Batman team up to do some old-fashioned detective work. Find out about their exploits in our review of THE FLASH #21!

For Bruce, this meant telling his father that he had a grandson, Damian. For Thomas, this meant telling his son NOT to be Batman anymore, to give it up and be happy. This is a surprising turn of events, and it’ll be interesting to see if and how Thomas’ words affect Bruce going forward. For now, these moments are truly tear-jerking, beautifully executed through Williamson’s dialogue. There’s also a great inspiring quote that unites the two Batmen, in a memory scene that very much echoes BATMAN BEGINS and THE DARK KNIGHT RISES. Thomas tells Bruce, “Sometimes we fall, son. But always remember, Waynes never stay down. We rise up!”

This triumphant quote rocks across the timelines, uniting father and son in a common purpose as Batman. The scenes shared between them are so beautifully done. Really the only thing they’re lacking is a hug. I mean that! I know these guys are Batman, and they have understandable difficulty expressing emotion. But come on! They both believed the other dead and hadn’t seen each other for 20 years! I think that deserves at least a full minute of father/son hug time!

Elsewhere in the issue, the plot revs up nicely, with Flash attempting to put two and two together about why the Flashpoint still exists. We don’t have the answers yet, but we’re getting closer. Flash believes that the Flashpoint should have collapsed, but some all-powerful entity is holding it together. As Flash and Batman leave the issue hot on the trail of the Button, it seems like we might be in for our first look at Dr. Manhattan in THE FLASH #22. Either that or another big tease. We’ll probably get a glimpse of a giant blue hand at least.

The art by Jason Fabok is really terrific, especially with the way he juxtaposes the designs and actions of the two Batmans. The designs for both Batsuits obviously existed previously, but this is the first time we’ve seen them together. We’re able to note the distinctive differences in how the two suits emulate the world that each respective Batman lives in. The same is true of their arsenal, with Thomas’ Batcave decked out in bombs and military equipment. Through the art, we see that Thomas is a Batman prepared for war at all times. When the two Batmans fight side by side, even Thomas’ fighting style looks a bit more brutal, with Bruce’s attacks more deliberate. These are two very different Batmen, and the artwork goes a long way to show that.

READ: “The Button” began with a surprise assault in the Batcave. Read all about it in our review of BATMAN #21!

BATMAN #22 marks a remarkable third part of “The Button” crossover, finally giving fans the emotional father/son reunion we’ve always wanted. It’s amazing how each issue of the crossover has hit a different mark of excellence, (action, plot, and emotion, respectively) while all three have formed into a cohesive series that achieves levels of near perfection. We’ll see if the finale can stick the landing. Either way, BATMAN #22 has given us a landmark event in the history of the Dark Knight. That alone makes “The Button” one of the very best comic book arcs of the modern era.