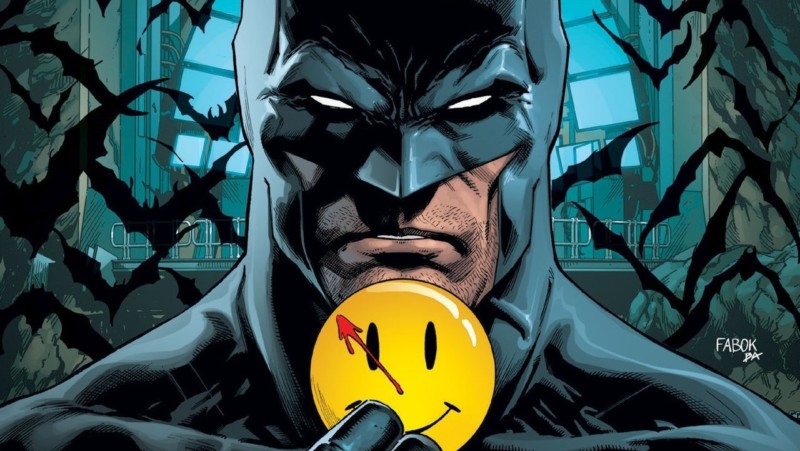 Phew — that was intense! We’re only one issue into the highly anticipated “The Button” Batman & Flash crossover, and it’s already moving with the pacing of a final act. BATMAN #21 is filled with twists and turns. In fact, the entire issue is basically one gigantic twist. Thought you were getting the start of a low-key, cerebral investigation into the mystery of the blood-stained button? Wrong! You’re getting Reverse-Flash breaking into the Batcave and beating Batman bloodier than that button! It happens so fast you can barely process it, which is appropriate considering the speed and ferocity of Reverse-Flash. It’s a thrilling start to an issue, brimming with action and a thick layer of complexity right underneath. 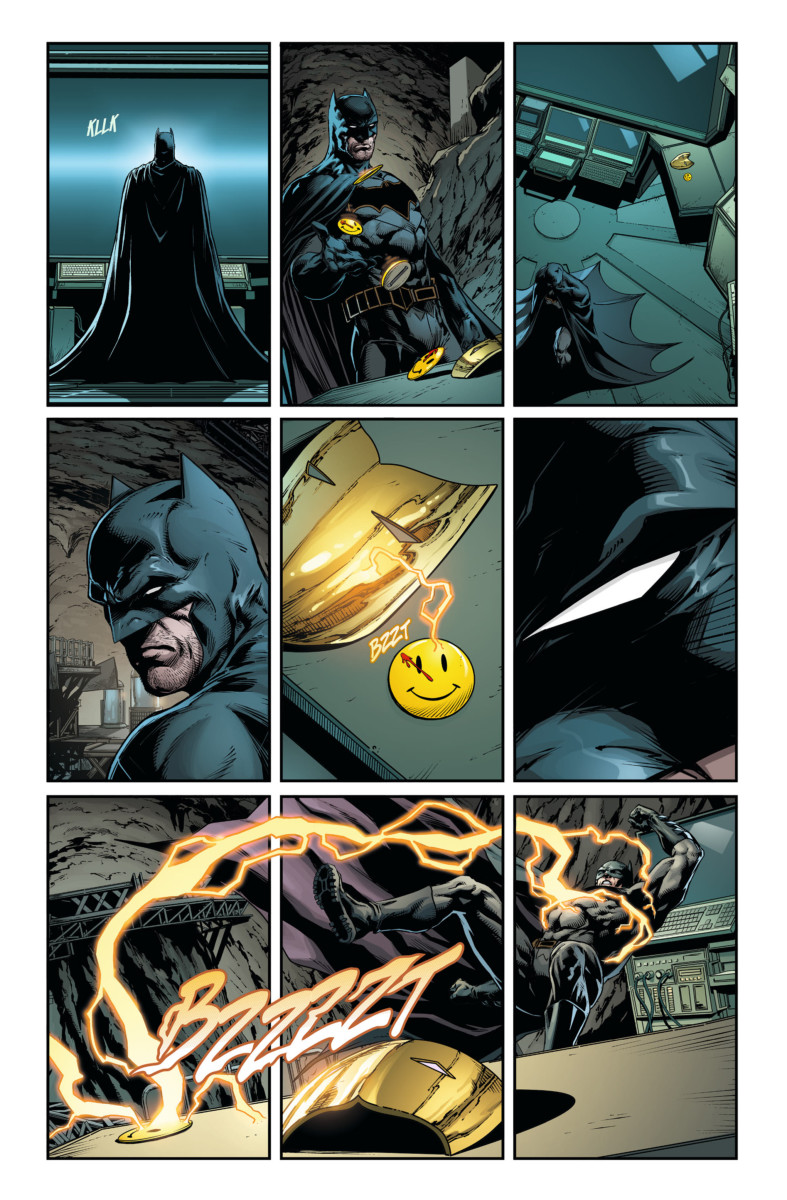 BATMAN #21 opens rather strangely, with the blonde Legionnaire from DC UNIVERSE: REBIRTH now in Arkham Asylum, watching a hockey game. Suddenly, she starts screaming about how one of the players is going to die. She turns out to be correct, as one of the players is beaten to death while Batman views it from the Bat computer, WATCHMEN Button in hand. Whatever Batman was hoping to glean from watching the hockey game is quickly forgotten, as the Dark Knight gets zapped with the combined energy of the Button and Psycho Pirate’s mask. Bruce experiences a brief vision of his father as Batman from the Flashpoint timeline, prompting Batman to call in the Flash to get to the bottom of the mystery. Flash gives Batman a one-minute ETA. As it turns out, a whole lot can happen in one minute. Two seconds after they disconnect, Eobard Thawne shows up, back from the dead and determined to make Batman pay for his death at Thomas Wayne’s hands. Reverse-Flash launches a savage assault on Batman, interrupted only by that shiny gold Button, which suddenly seems quite desirable to Thawne.

READ: The previous issue saw Batman coming face to face with Bane in an emotionally stirring conclusion to “I Am Bane.” Learn all about it in our review of BATMAN #20!

I‘ve been a pretty vocal critic of BATMAN writer Tom King in the past, primarily for his penchant for being overly philosophical and dispensing with personality to force his characters to spout lengthy monologues. I’m happy to say that isn’t a problem here – the action moves swiftly, the dialogue is top-notch, and the characters are fueled by incredibly natural emotions. Perhaps it was the speed of the Flash that helped King to accelerate his storytelling method.

The Story of BATMAN #21: One Minute

BATMAN #21 is framed with a unique storytelling device, thanks to the one-minute countdown clock affixed to each panel. This is the time in which the Flash is supposed to arrive, and as every second passes, Thawne beats Batman more and more severely. Reverse-Flash’s attack on Batman is brutal and effective, and the countdown clock doubles the impact. The issue essentially takes place within that one-minute time span, making the carnage wrought all the more effective, while simultaneously providing a nice allusion to WATCHMEN, which created its own drama through the Doomsday clock’s steady ticking towards midnight.

Speaking of allusions, part of BATMAN #21’s impact comes from its many references to Geoff Johns’ “Flashpoint Paradox” storyline. The references make sense, considering that the end of Flashpoint has been directly tied to WATCHMEN’s Dr. Manhattan, and it appears to be the point at which the blue god ruptured the DC timeline. Eobard Thawne’s appearance and seeming resurrection raise many questions, and his uncertain fate at BATMAN #21’s conclusion raises even more. That his sudden return and equally quick departure is tied to Dr. Manhattan seems all but certain.

The brief glimpse of Thomas Wayne as Batman is quite striking and makes me wonder whether the reality-warping nature of DC Rebirth will allow us to experience a lengthier meeting between father and son. For now, the elder Wayne’s impact permeates the comic, particularly in the heart-wrenching moment when Thawne tears apart the letter that Thomas gave to Bruce. Brutal as Thawne’s physical attack on Batman might be, this emotional one hurts even more. 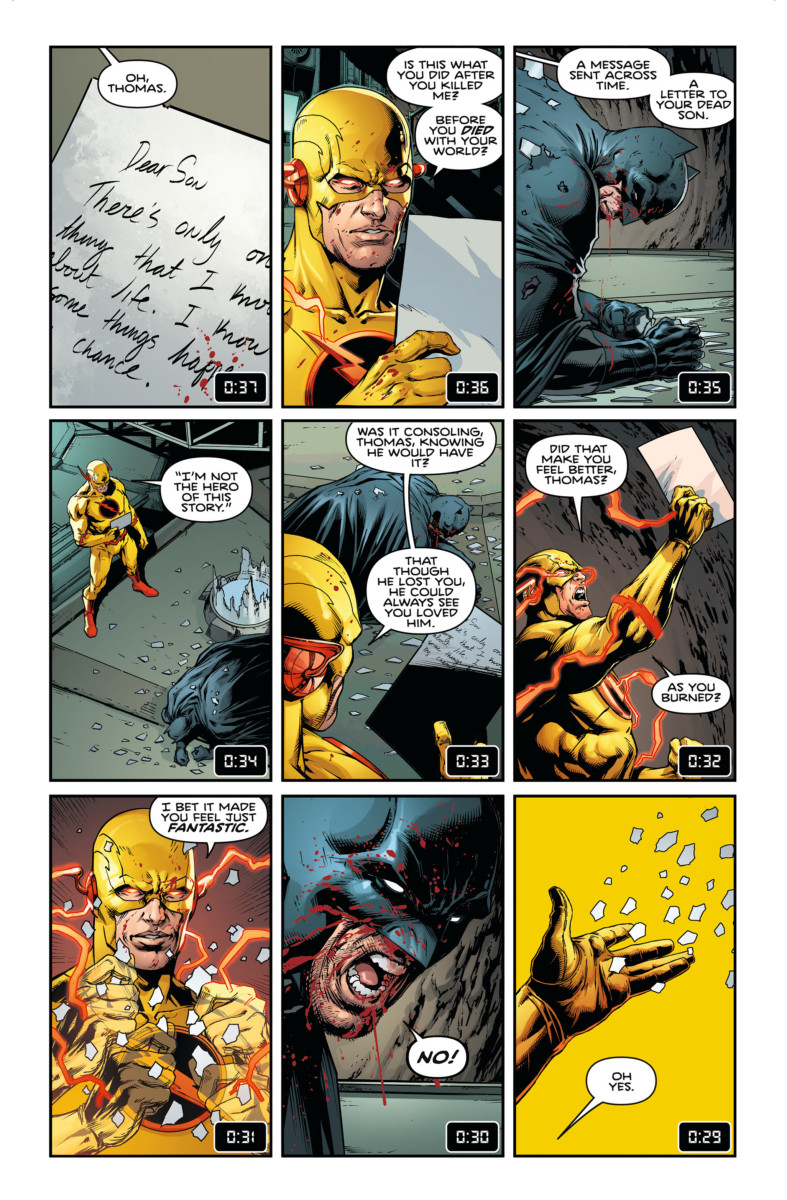 The only part of BATMAN #21 that seems a bit off is the beginning. I’m not sure why Saturn Girl (or whoever that blonde Legionnaire might be) was so attuned to one particular hockey game murder. I’m also not certain why there was deliberate crosscutting between the hockey game and Batman turning the Button between his hands. There must be some connective tissue between the brutal murder of a random hockey player and that blood stained button. My guess would be that the random murder is a sign of Dr. Manhattan’s increasing dark influence on the DC universe. Manhattan’s apparent mission has been to remove the bonds of love from the world, and hateful murder is certainly the opposite of loving embrace. This juxtaposition could be nicely symbolized by the blood-stained smiley Button in Batman’s hand, referencing the perversion of happiness. Then again, maybe I’m just spitballing. Regardless of the reason for that hockey weirdness, it’s a minor complaint.

The Art of BATMAN #21: Blood-Soaked Beauty

I can’t begin to heap enough praise on artist Jason Fabok. Due to the ticking clock component, there are considerably more panels in BATMAN #21 than usual. As a result, Fabok delivers about twice the content he normally would, and given the violent nature of this issue, it was essential that he cram each panel with as much action as possible. Fabok rises to the occasion, pumping each small panel with the force and intensity of two larger panels. The assault on Batman ripples across page and panel, pooling enough blood to soak through the cover. At times, it really does appear that the blood is leaking from page to page. Quite fitting in a comic about the WATCHMEN Button.

READ: Bad guys won’t stop breaking into the Batcave! Find out why Batman needs better security in our review of DETECTIVE COMICS #954!

This was an amazing issue of BATMAN and a hell of a way to kick-off “The Button” 4-part crossover. It really hit the ground running, offering plenty of suspense, action, and emotion. Most importantly, it’s by far the most pivotal single issue in the DC & WATCHMEN crossover since DC UNIVERSE: REBIRTH. BATMAN #21 builds gloriously on the legacy established by Geoff Johns, both in DC UNIVERSE: REBIRTH and “The Flashpoint Paradox.” At the same time, “The Button” part 1 points toward an intriguing future, where realities will collide, timelines will intertwine, and the WATCHMEN will finally meet the heroes of the DC Universe!