With one more issue left in the “I am Bane” story arc, BATMAN #19 effectively sets up a promising finale that readers should be excited about. The issue puts a heavy focus on Bane as the powerhouse punches his way through some infamous patients of Arkham Asylum. Tom King continues to write Bane as the ultimate physical threat, but we also better understand the character’s reasoning behind his rampage. David Finch’s art style enhances the action echoed in the previous issue, further establishing the most violent Bat-story currently on shelves right now.

READ: Missed the previous installment? Recap on the similarities between Bane and Batman with our review of BATMAN #18!

Following Batman inside Arkham Asylum, Bane encounters many familiar villains of the Bat. Turns out Batman made a deal with the lunatics of the Asylum. As Two-Face explains, if the inmates of the Asylum can take down Bane, Batman will improve their imprisonment conditions. Unfortunately, Bane’s here to bring the pain, and down goes Two-Face with a vicious gut punch and a left hook from the muscular giant. Harvey isn’t the only one that falls prey to Bane’s wrath, as he also overpowers Solomon Grundy and Amygdala. These two giants appear to be in the same weight class as Bane, but after he takes in that sweet, sweet venom (finally), they’re both left outmatched as the scene cuts away and we only hear them scream in agony. As certain villains in the Asylum are bested at their own games, Bane not only showcases his indomitable strength but as well as his determination. Huh. Sounds familiar. 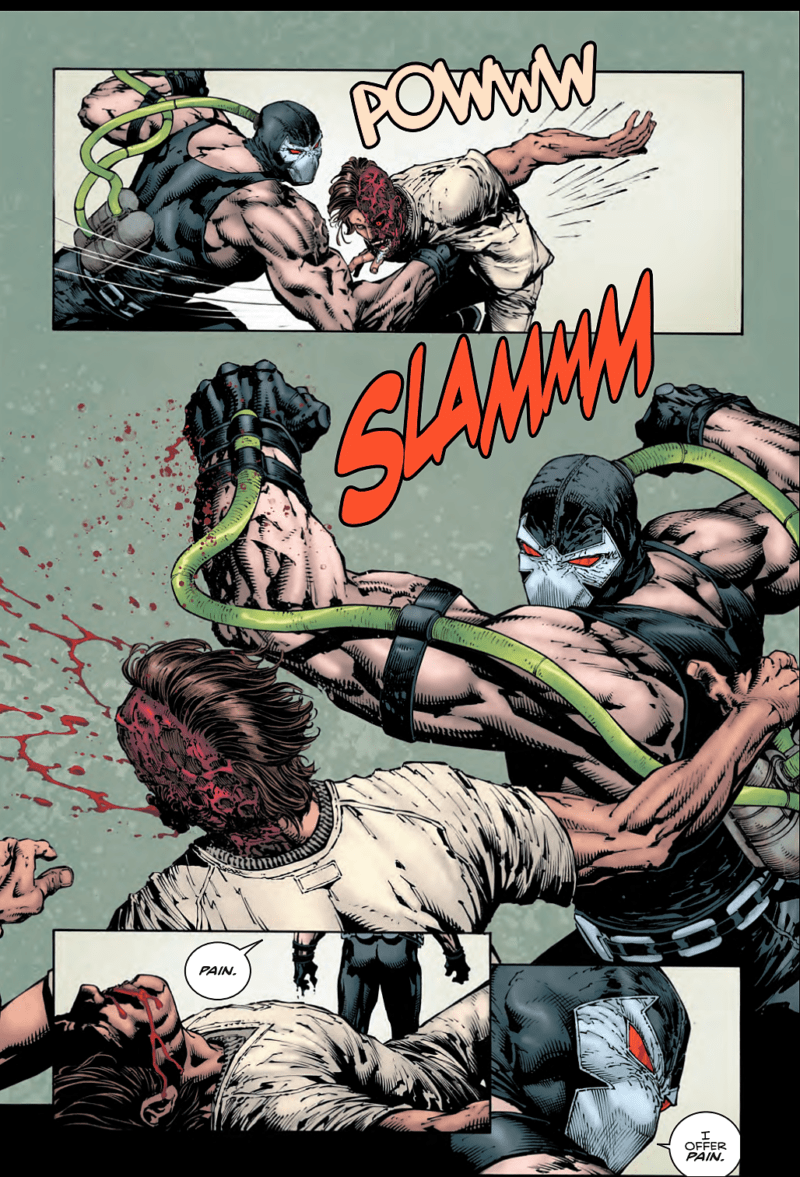 In BATMAN #19, Tom King further distinguishes Bane from Batman’s other rogues, not only with the character’s superiority but by also expressing Bane’s desire to change. The previous issue showcased how Bane was molded, and to escape such pain and insanity, he needs Psycho Pirate’s abilities. Although this echoes the narrative from the “I am Suicide” arc, here we truly understand why Bane would go such lengths to have the Pirate back in his fortress. What’s a bit silly, though, is how King portrays Bane’s repressed feelings. Bane expresses his thoughts to different inmates one panel at a time, as each of them hears a different part of his narrative. From the reader’s perspective, this makes sense but when you think about how Bane is moving from one villain to another and telling them a fragment of his story, it becomes silly because he’s basically talking to himself. All that wasted narrative would have made for an interesting interchange between Bane and Batman alone.

READ: ALL-STAR BATMAN #8 takes us down the rabbit hole of Bruce Wayne’s head. Find out more with our review!

King is, however, not shy of brilliance in this issue with his use of famous literature to set the tone. As Bane enters the Asylum, he’s greeted by Maxi Zeus, who’s repeating the first few lines of Canto III of Dante’s Inferno, book one of The Divine Comedy. This sets up a sign of warning, similar to the part in Inferno, as Bane enters through the gates of hell — Arkham Asylum — uncovering the different circles of the abyss that awaits him. The issue again brings us back Maxi Zeus for the last few pages, as this time he recites the words from The Marriage of Heaven and Hell. The spoken words put an emphasis on opposites and their balance, and how it can be misunderstood or misrepresented. As Bane and Batman meet face to face by the end, both are bruised and are in a similar predicament, yet one is viewed as good and the other as evil or misjudged. 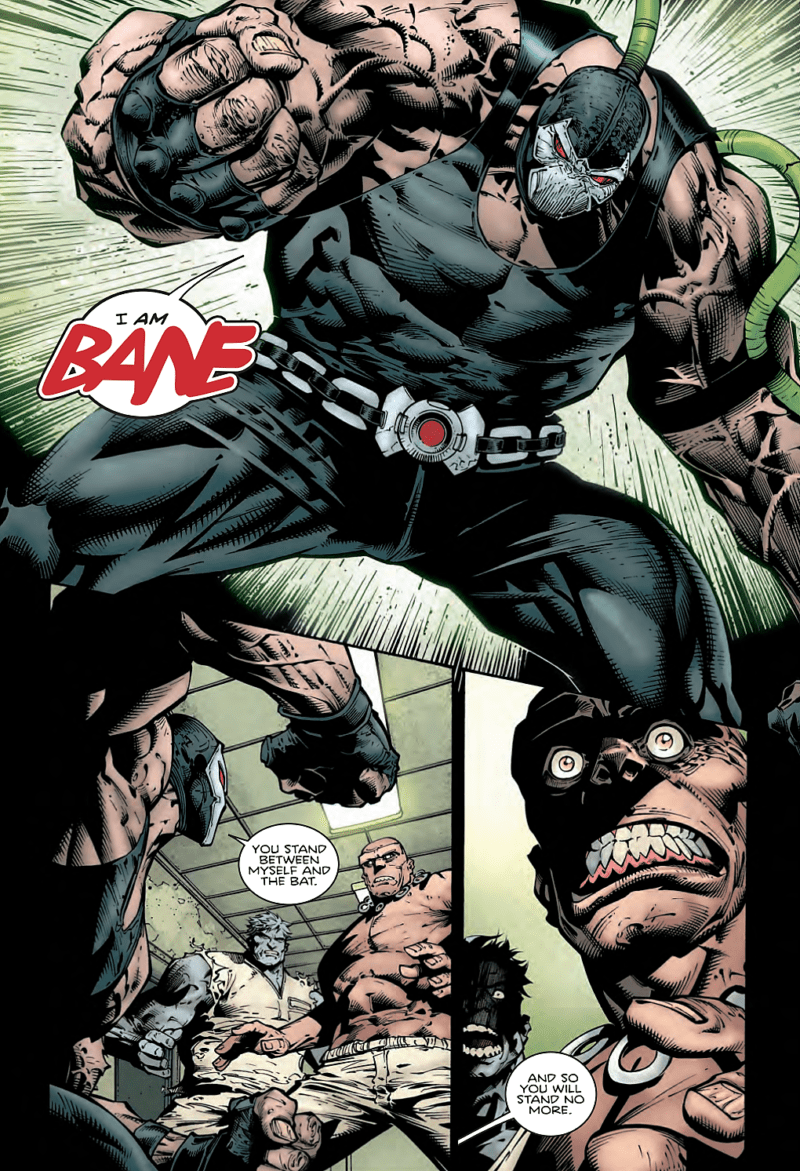 David Finch’s pencils prove to be versatile towards the different kinds of action scenes and characters seen in the issue, each with their own size and physique. What’s distracting, however, is Finch’s take on villains without mask or abnormalities. Two-Face, Riddler, and even Maxi Zeus seem to have the same facial structure. This seems to be a recurring annoyance in Finch’s art style, seen back in BATMAN #16 where the Bat family looked far too identical. The art style, however, succeeds at capturing the force and ferocity of Bane. The colors of Jordie Bellaire explode with all the blood spills and punishing blows. And for each major villain Bane encounters, a unique choice of background color sets the mood and transcends the panels. For instance, a one full page splash of Two-Face shows an obscured, dark background, while the encounter with Mr. Freeze possesses the familiar blue, icy chill.

As the “I am Bane” arc draws near its end, BATMAN #19 will definitely grab your attention as Bane proves himself unstoppable. Despite being light on the titular character, the spotlight successfully shines on Bane in this issue. With all that anger and suppressed emotion, it’s the poor inmates of Arkham that feel his wrath. Feast your eyes on the sheer violence and entertainment spread throughout the pages as we get closer to the big showdown.