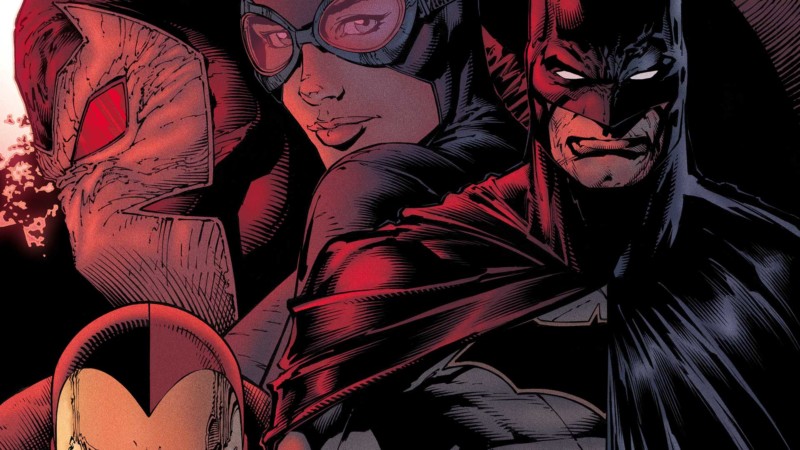 Bane isn’t naked anymore!! WOOOOOOOO!!!! Yes, after the bizarrely nude Bane’s fight with Batman four issues ago, the muscle man is back, fully clothed and ready for a rematch. After issue #16’s excellent blend of comedy and drama, BATMAN #17 tilts the scale back towards the dramatic, with more of the high stakes and over-philosophizing we’ve come to expect from Tom King’s writing. The result is an issue that builds excellent anticipation for the Batman vs. Bane confrontation, but unfortunately does so at the expense of nuanced characterization. 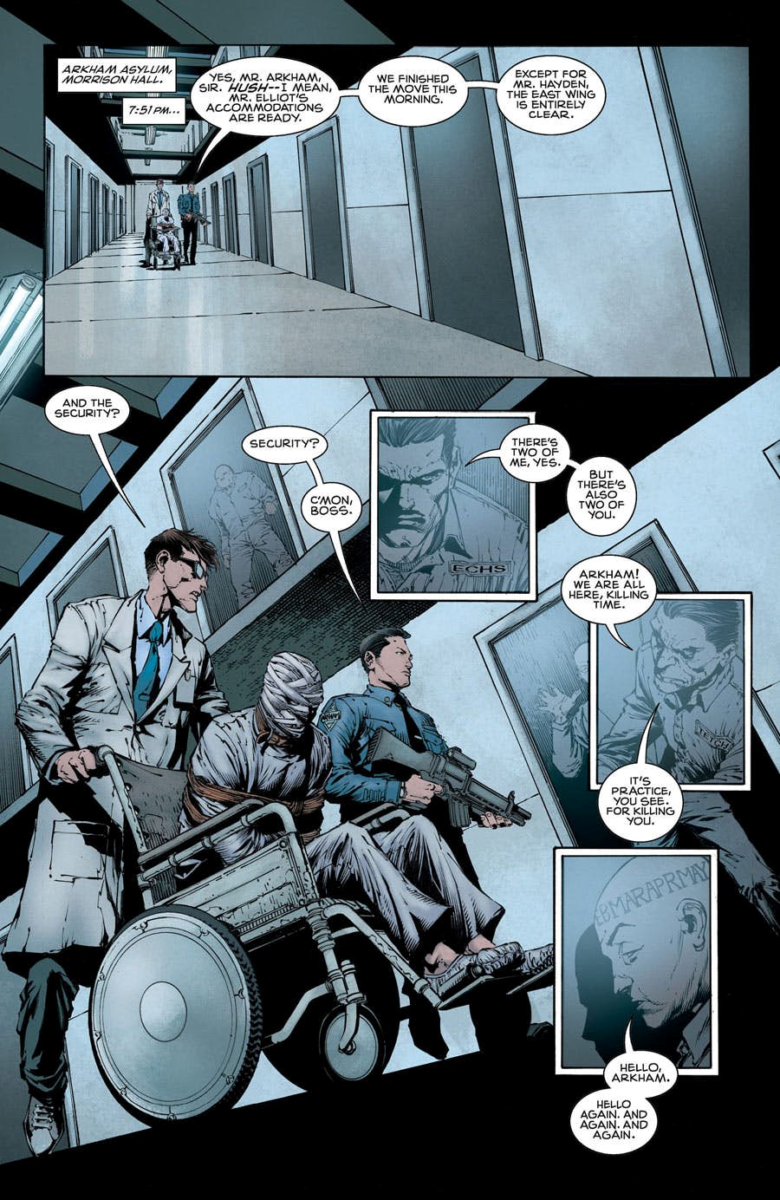 The issue opens with a surprise trip to the Fortress of Solitude, where Batman has put Dick Grayson, Jason Todd, and Damian Wayne into cryo-sleep (a bit jarring since they appeared to be dead at the end of issue #16). Batman asks Superman to keep them safe for the next four days, while Batman prepares for his final confrontation with Bane. Meanwhile, Alfred, disguised as Dr. Jeremiah Arkham, takes Gotham Girl into the super-secret bowels of Arkham Asylum, where he attempts to force Psycho Pirate to un-hypnotize Gotham Girl by hypnotizing her. Throughout Gotham, several of Batman’s allies are taken out and rounded up by Bane’s men, prompting a tantalizing cliffhanger ending, which teases of a massive Dark Knight Vs. Muscle Man smackdown next issue.

READ: BATMAN #16 featured an unusually comedic tone. Read about it in our review!

The best element of this issue is the build-up to Bane’s appearance. Batman hiding away his Robins, in conjunction with Bane’s systematic round-up of Batman’s most important allies (including Duke Thomas, Selina Kyle, and Jim Gordon) shows us that Bane is a more powerful force than we thought. His appearance at the end of the issue is particularly heart-stopping. What’s unclear is why King feels the need to extend so much gravitas to this particular villain. King has spent a majority of his run on BATMAN building up Bane as Batman’s ultimate foe, but the depiction doesn’t quite ring true. Batman has gone into threat-containment mode in a capacity that borders on panic. This reaction would be more understandable if the threat were being perpetrated by the Joker or Ra’s Al Ghul. Bane, at the end of the day, is just a strongman. It’s true that his round-up of Batman’s allies shows a certain power, but it’s an act that seems a bit forced in order to beat home King’s point. King mostly uses the characters to tell us that Bane is a horrifying threat, without really showing it until the issue’s end, which comes a bit too late in the game to ring true.

This relates to a larger problem I have with Tom King’s writing – his tendency to tell rather than show. King is a very cerebral writer, and he’s very good at having his characters profess grand, philosophical statements that conveniently corroborate the narratives that King weaves. Essentially, his characters act as cyphers to deliver his plot points, and while it’s often through good dialogue, the characters don’t really sound like real people. Take, for example, the following monologue from Psycho Pirate:

“It’s all the worlds that scare me. How they keep coming and going? Every year, we’re dying, and every year we’re re-borning. Who will I be tomorrow? I don’t know. But who does?”

Who talks like this?! It’s exactly this kind of circular monologuing that has become par for the course in King’s writing in BATMAN. It would be one thing if philosophical pondering were part of Psycho Pirate’s character. But if you look back through the issues, virtually every character King writes has had similar monologues. Dr. Strange. Bane. Catwoman. Even Batman himself. Batman is a man of few words, but the way King has often written him, you’d think Batman was a Shakespearean actor. This kind of uniformity in speechifying undermines character, and it comes off as lazy. Basically, Tom King has become the Christopher Nolan of Batman comics. 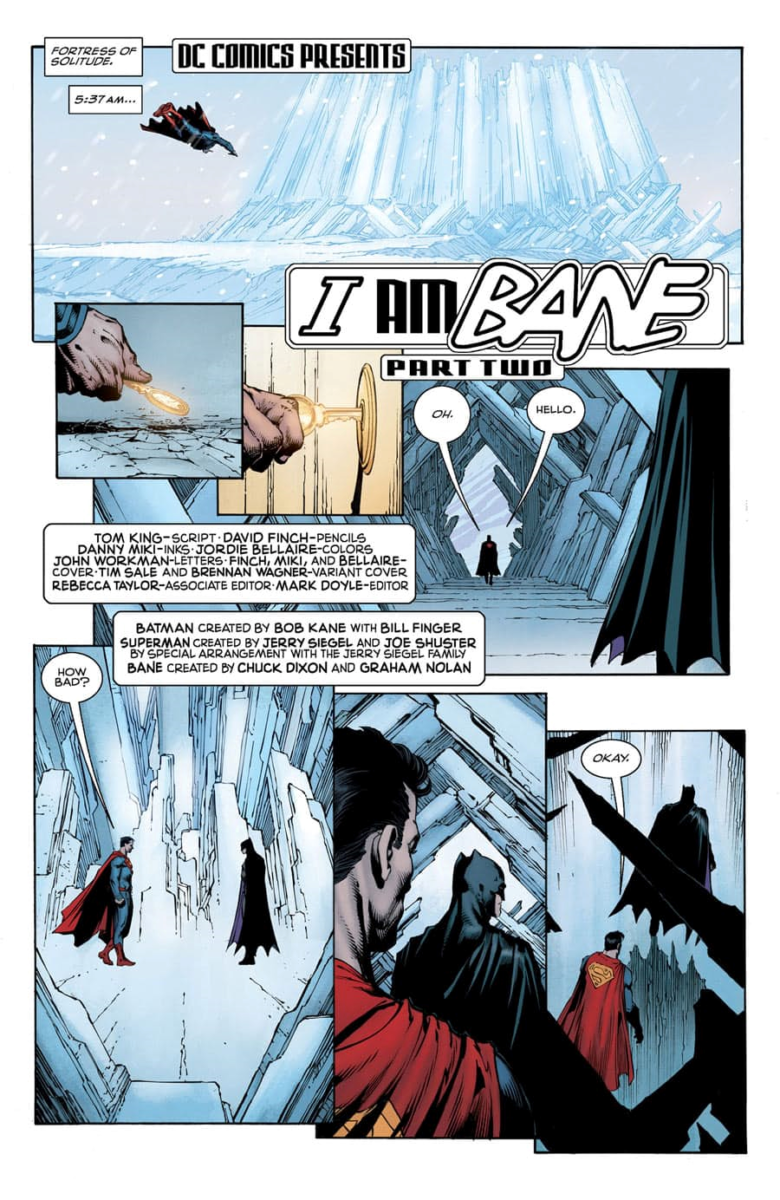 This over-writing is particularly noticeable in BATMAN #17, because #16 had unusually ripe character diversity. The scene between Bruce and the multiple Robins at the Bat-burger joint was the funniest and most character-driven scene that King has written in 16 issues. Each of the various Robin’s personalities shined, and they played off each other. King is capable of creating great character intimacy when he wants to, as in his sublime Bat/Cat two-parter. Those issues had romantic intimacy, and #16 had brotherly intimacy. But BATMAN #17 frustratingly reverts back to King’s usual tropes of characters commenting on the narrative without ever interacting with each other in meaningful ways.

READ: Our review of BATMAN #15, which discussed the beautiful portrayal of Batman and Catwoman!

It’s not all bad though. At the very least, King shows us very tantalizing scenarios, such as Alfred forcing Psycho Pirate to un-hypnotize Gotham Girl at gunpoint. Beyond demonstrating Alfred’s badassery, this situation should invoke some interesting psychological dynamics in future issues. Though I think it would have been stronger for Gotham Girl’s character if she had been able to reclaim her sanity on her own, Pyscho Pirate’s return raises the stakes dramatically, and makes us wonder if he has any insidious tricks up his sleeve to plunge Gotham Girl further into insanity.

David Finch’s pencils and Jordie Bellaire’s colors are bold and finely detailed as usual, with terrific use of dramatic shadowing. Bane’s takedown of Batman’s allies is conveyed through suggestion rather than explosive action. Batman and Bane’s standoff on the rooftops of Gotham is full of nuanced use of light and shadow, suggesting Bane’s presence up until the moment he’s revealed in a burst of red flame. Kudos to colorist Bellaire for her diverse color palette, emphasizing the dramatic moments. There may have been a slight goof in coloring Superman’s boots classic red rather than the blue of his modern costume. But compared to the beautiful attention to detail throughout the issue, this is the slightest of errors.

Overall, BATMAN #17 is a bit of a mixed bag. It employs a good narrative and it’s extremely well-paced, but the characterization is muddled. King’s over-reliance on pseudo-intellectual monologues is growing wearisome, and it’s time for him to execute his stories with a new strategy. Hopefully King can use the remainder of the “I Am Bane” arc to return to the character intimacy that defined his recent issues. Until then, I’ll look to DETECTIVE COMICS to find truly dynamic characters.