BATMAN #15 brings the journey of Batman & Catwoman to a close and finally answers the question of just who killed those 237 people that Catwoman was blamed for. The mystery began in the “I Am Suicide” arc and, over the last two issues, has evolved into nothing less than a deep and intimate study of the love shared between the Bat and the Cat. BATMAN #14 was a lighthearted installment that played with the flirtatious nature of Batman and Catwoman’s relationship, but by the end of the issue, their clothes were off and they were exposed, figuratively and literally. What started as something playful was actually the groundwork for a much more probing investigation into their psyches, and Tom King pays it off beautifully here. 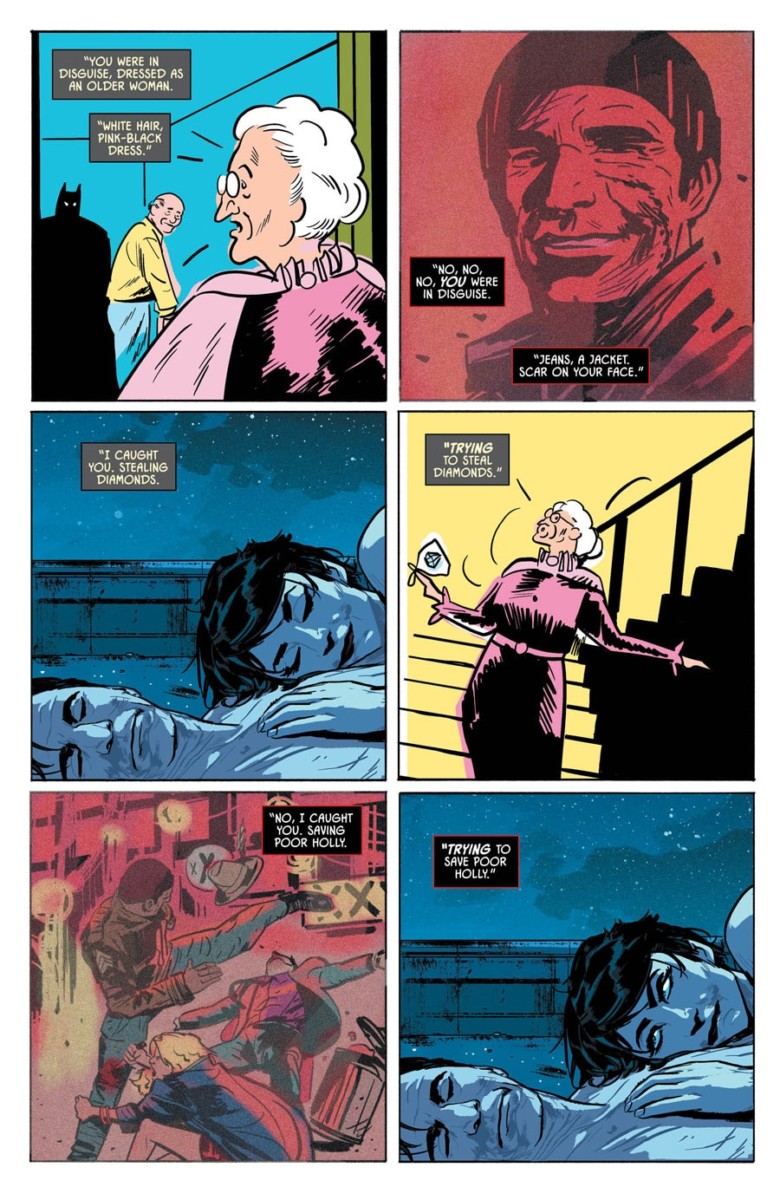 Bruce and Selina awaken on a rooftop after a night of lovemaking. Their feelings thoroughly expressed, it’s back to business as Catwoman does the thing she’s best at–she runs. Batman tracks down Holly Robinson, Catwoman’s ward and a fellow orphan. Batman hopes to find Catwoman through Holly, but the former orphan has a few tricks up her sleeve. Batman is desperate to prove that Selina is innocent of those murders, so determined that he doesn’t recognize the obvious danger posed by the unstable Holly. Revealing anymore would be spoiling the issue, but the real juice of this story comes from the vulnerability we see in Batman.

READ: The depth of the Bat and the Cat’s relationship was revealed in BATMAN #12, which we reviewed here!

We’re so used to seeing Batman as a stone statue, emotionless, determined to dole out his vision of justice. He acts decisively at all times, even when others see his actions as morally ambiguous. His costume provides an armor, both inwardly and outwardly. On the outside, it protects him from bullets. On the inside, it prevents his emotions from becoming exposed. Yet, here, Catwoman has done something profound to Batman. He began the issue naked, and though he put his clothes back on, his psyche remains exposed for the remaining pages.

To Jim Gordon, Batman admits his failure to bring in Catwoman. For just a moment, the Commissioner is able to see through the mask, to the emotional turmoil underneath. To Holly, a potential threat, Batman goes even further. He tells Holly that he’s going to prove that Catwoman is innocent at any cost. He even confesses that Selina is the only person in the world who truly knows him. To a stranger, Batman confesses his innermost feelings. It would be considered out of character, if not for the fact that Batman acting out of character is the point of the whole issue.

At a key moment, Batman nearly loses his life. His throat cut, Batman tumbles out of a window. Instead of catching himself as he usually does, it’s Catwoman who catches him. She saves his life, while simultaneously recognizing that it’s her fault he nearly lost it. As she holds Batman in her arms, bleeding out, she purrs to him sadly, telling him he’s upside down. “You catch me,” she reminds him. This is the cost when Batman lets his feelings come out. This is why the Bat, and the Cat can never truly be together. In Tom King’s vision, if the world is going to have a Batman, the world needs Batman to be alone. 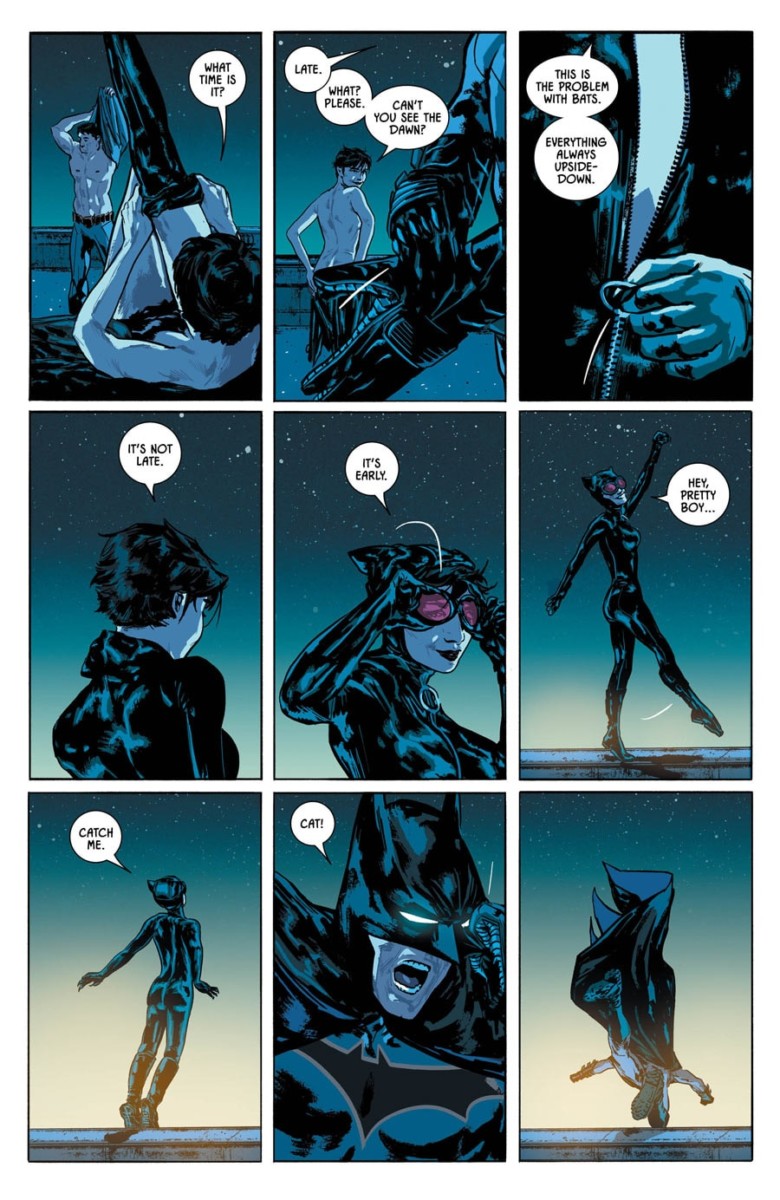 Complementing the beautiful script is Mitch Gerads’ artwork. The issue begins with Batman and Catwoman delivering alternate versions of how they met. Gerads adapts these visions with two distinctive styles, one evocative of the 1960’s Adam West Batman TV show, the other more closely based on the noir-style sketches of Frank Miller’s 1980’s work. They each represent two personal forms of history, two visions of the past, probably neither of which are completely accurate, but they represent the tinges of personality that jade their most meaningful memories. The rest of the issue is packed with beautiful dreamlike imagery. The entire comic has a kind of haze over it as though it’s being filtered through the characters’ emotions, rather than a direct depiction of events. Considering the whole issue is about those emotions, this approach is perfect.

READ: The Bat and The Cat reunited for a whirlwind tour of Gotham’s rooftop in BATMAN #14, and we reviewed it here!

Gerads’ color palette adds even more dimension. As Batman chases Catwoman across the rooftops, the dawn gradually breaks over Gotham. The chase begins at night, but by the time Catwoman has escaped, a new day has begun. The “night” which the Bat and the Cat shared was over. When Batman confesses to Holly, the conflict plays over their faces in alternating shades of blue and red. It appears to reflect neon lights outside the apartment window but more deeply represents the inner duality of Batman’s struggle. Who is Batman? Is he the light of Catwoman’s love, or is he the lonely dark of night?

A key moment gives us the answer. As Bruce recovers from his wounds and puts his mask back on, he reveals to Alfred what Catwoman gave to him… and what she stole from him: “The night, Alfred. She stole the night.” The Bat can have the Cat, or he can have the night, but he can’t have both. As Catwoman disappears, Batman is finally able to reclaim the night.