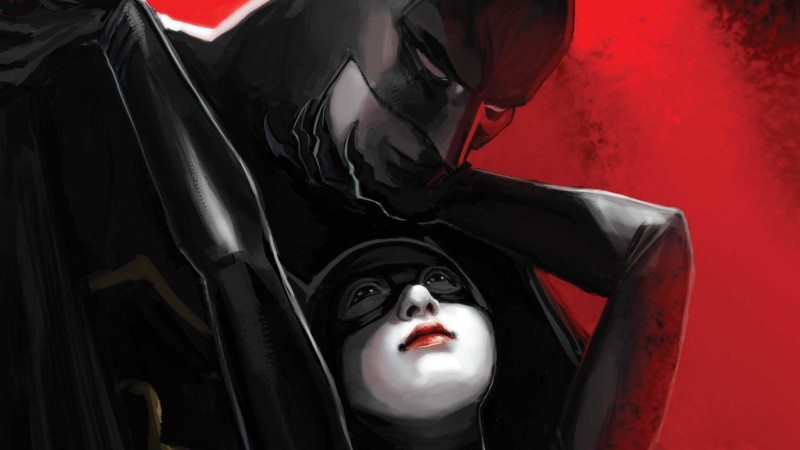 Tom King’s run on Batman has been insightful and cerebral, with a uniquely probing take on Batman’s inner workings. It’s also been full of drama and almost entirely without humor. What a refreshing change of pace then, that BATMAN #14 is an issue full of humor, intrigue, good old fashioned crime fighting, and most importantly, fun. I hadn’t realized how much I missed those elements from BATMAN, until reading this issue. The result is a story that takes a break from the overarching plot, and lets two characters we love, Batman and Catwoman, express the deepest nature of who they are. 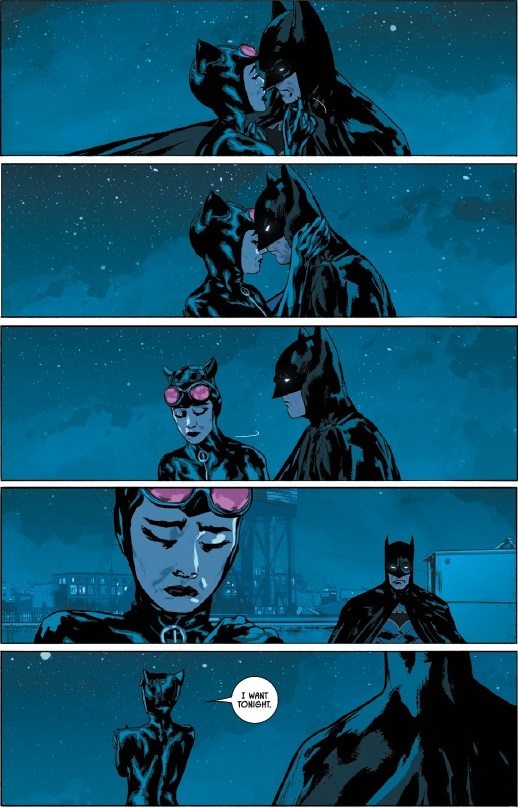 The story centers on a simple night on the rooftops of Gotham. Batman has just broken out of Santa Prisca prison and returned to Gotham, with Selina Kyle in tow. Now that their mission is behind them, Batman must return Selina to prison, for the apparent murder of 237 people. But it’s just the two of them on a lonely rooftop, and the chemistry between them is palpable. Catwoman tries to convince Batman to let them have one night together, just one, before he takes her in. Batman is easily convinced.

READ: The depths of Batman’s and Catwoman’s relationship were explored in BATMAN #12, discussed in our review right here!

The fun of this issue mostly emanates from the “will they / won’t they” teases as Batman and Catwoman enjoy a night on the town. Instead of dinner and drinks, it’s taking out criminals and returning stolen goods. Instead of a ballroom dance, it’s a tag-team beat down. Each of these moments begins with a fun sexual innuendo, such as Catwoman purring to Batman, “It’s late. The air is cold, our beds our warm. What do you want to do?” Next panel, the Bat and the Cat immediately smash through a window and knock out a criminal. Then there’s the moment that features Catwoman hanging upside down, presumably over Batman, indulging in this exchange –

As it turns out, what Catwoman likes is hanging in front of a window, breaking into an apartment, and stealing a cat statue. These innuendos are a lot of fun, building through the issue and mounting to a fever pitch by the end, when the criminals are gone and Bruce and Selina are faced only with each other. Their characterization is on point throughout the issue, with Batman’s determination to take on crime consistently questioned by Catwoman. She goes along with the fight, but, unlike Batman, takes tremendous joy out of it. The Cat’s lively spirit is always at odds with the Bat’s surly determination. And yet, they work together beautifully, their approaches differing, but the results always the same. The reasons they’re so attracted to each other have never been clearer. 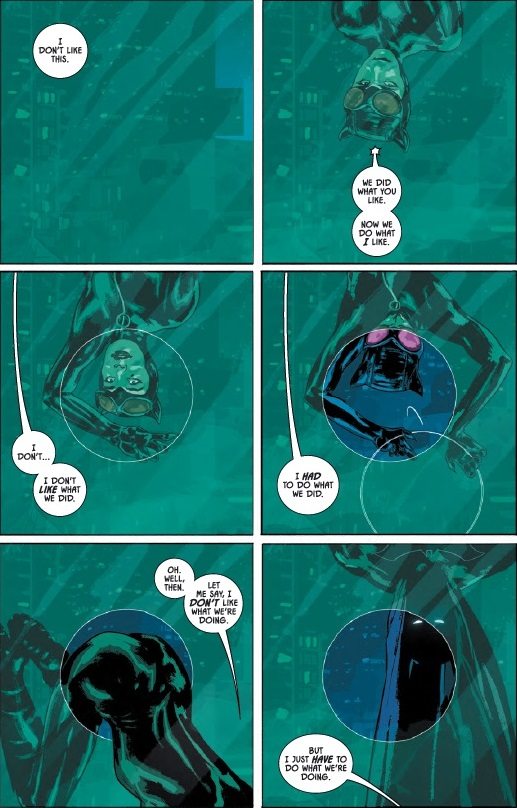 The issue is light on plot, and any hope of finding out why Catwoman supposedly killed 237 people is quickly dashed. All we learn is that Catwoman may have been framed or willingly took the fall for the murders, but details of the crime remain a complete mystery. But after many issues of dense plotting and sometimes morose storytelling, it’s a relief to take a break. The threat of Bane is put on the sidelines. Instead, Batman and Catwoman take on ridiculous criminals such as Film Freak, Mad Monk, and Condiment King. The hilarious villains are just part of the fun. They really don’t matter, and the emphasis is placed on Batman and Catwoman doing what they do best.

READ: The “I Am Suicide” story arc came to a conclusion in BATMAN #13, and we review it here!

Also breaking away from the trend of previous issues is the art by Mitch Gerads. His style is strikingly different from usual series penciller Mikel Janin, and that’s a good thing. The characters here are designed a bit rougher, a bit smaller in scope and less broadly intimidating than in previous issues. Here Batman and Catwoman look less godlike, and much more like human beings. The difference is at first jarring, but the change in style is helpful, because it immediately suggests that we’re in for a different kind of story. It’s not about Batman and Catwoman, the hero and villain of Gotham. It’s about two human beings who, after a long night of crime fighting, seek comfort in each other.

“Rooftops” is just the kind of one-off story we needed. It provides a refreshing change of pace from King’s usual storytelling devices – a fun escapism, not often seen in the pages of BATMAN. While the plot will necessarily come back into play with the upcoming “I Am Bane,” story arc, it’s nice to see that King and Gerads are willing to present readers with different angles on Batman. This is a tale of two people: An age-old romance, redefined for a new BATMAN.