BATMAN #13 concludes the “I Am Suicide” arc in a bittersweet fashion. Writer Tom King further establishes a darker and unique direction for Bats. However, the script suffers from the unimaginative use of characters to tie into the execution. What redeems the quality of this issue and the overall arc thus far is the art of Mikel Janin and June Chung. The art delivers a shocking back-breaking scene from a character you certainly weren’t expecting.

READ: BATMAN goes on a kick-ass rampage in issue #12. Read our review!

After scouting Santa Prisca and taking on a gun blazing army in issue #12, an exhausted Batman finally comes face to face with Bane, who’s accompanied by Catwoman and Psycho-Pirate. After giving Bats a beating and even delivering a brutal fisherman suplex (K.O.), Bane offers Batman a cure. We learned that a venom free Bane has found solace thanks to Psycho-Pirate’s abilities to manipulate emotions. Bane suggests that Psycho-Pirate can do the same for Bats, to make him “better,” to keep him from chasing “monsters.” But the Dark Knight is only focused on the mission to rescue Psycho-Pirate and a yearning to BBB: Break. Bane’s. Back. 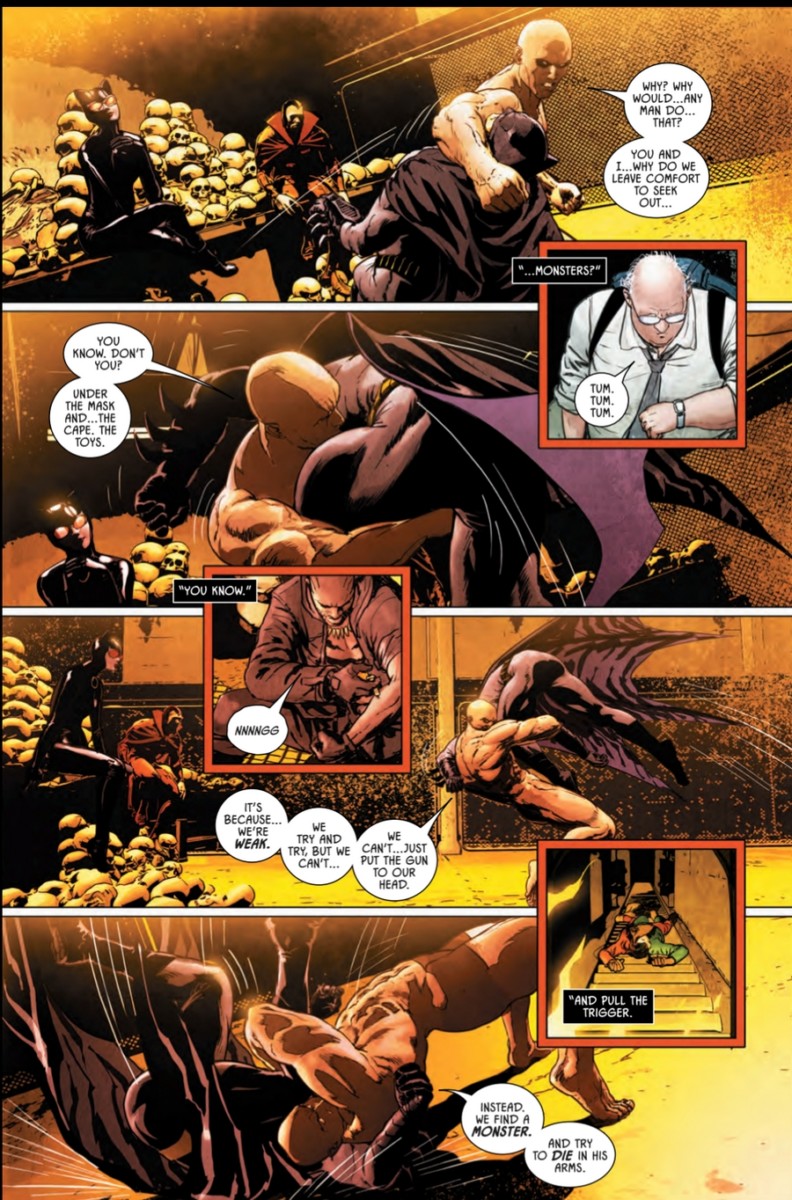 While the intense scenes take place between Bane and Batman, we also find out the status of Batsy’s little squad. After waking up from Catwoman’s attack in issue #11, the odd duo that is Punch and Jewlee escape death via furnace by coating themselves in anti-flammable gum. Bronze Tiger also manages to escape to the sewers to escort Ventriloquist. And as the Dark Knight’s faith seem to come to an end, he signals Catwoman as SHE delivers an epic blow to Bane’s back, shattering the naked giant. That’s right. THE CAT BREAKS BANE! And now that she has helped Batman with the mission, it’ll be interesting to see if Catwoman will be pardoned from her past killings and given a second chance. But that’s not all folks! The issue finally reveals the Ventriloquist’s purpose for the mission: to defeat Psycho-Pirate. In another stunning revelation, Psycho-Pirate’s emotion-controlling abilities seem to have no effect on the Ventriloquist as he’s already under the control of his puppet Scarface. With the help of his altered personality, the Ventriloquist easily knocks out the Pirate.

Tom King again displays his ability to create intense scenes while providing depth to dialogue. King’s “monster” reference in issue #11 is re-awakened here. This time, the monster isn’t caged inside of these characters. Rather, it’s what they chase after. Batman is Bane’s monster and vice versa. While Bane no longer needs his monster, and is able to find peace through Psycho-Pirate’s abilities, Batman is all about chasing his. Our caped crusader will forever be in a never-ending battle with his rogue’s gallery of villains. To stop chasing monsters would mean to stop fighting crime and to throw away the Bat mantle.

READ: Do you like how BATMAN has changed throughout his cinematic legacy? Discover what happened to the Caped Crusader in recent years.

Batman can easily stay comfortable thanks to the luxury of his Bruce Wayne persona. He can also take his own life to escape the endless chase, but according to Bane, he’s too weak to pull the trigger. This is where Bane fails to understand who the Batman really is. What King echoed in the last issue and again restates here: Batman IS suicide. The character is already half dead due to his traumatic childhood experience. Batman lives in pain. He endures it. As a protector of his city, Batman will forever leave the comfort to seek out monsters because it’s his purpose to save those in need. 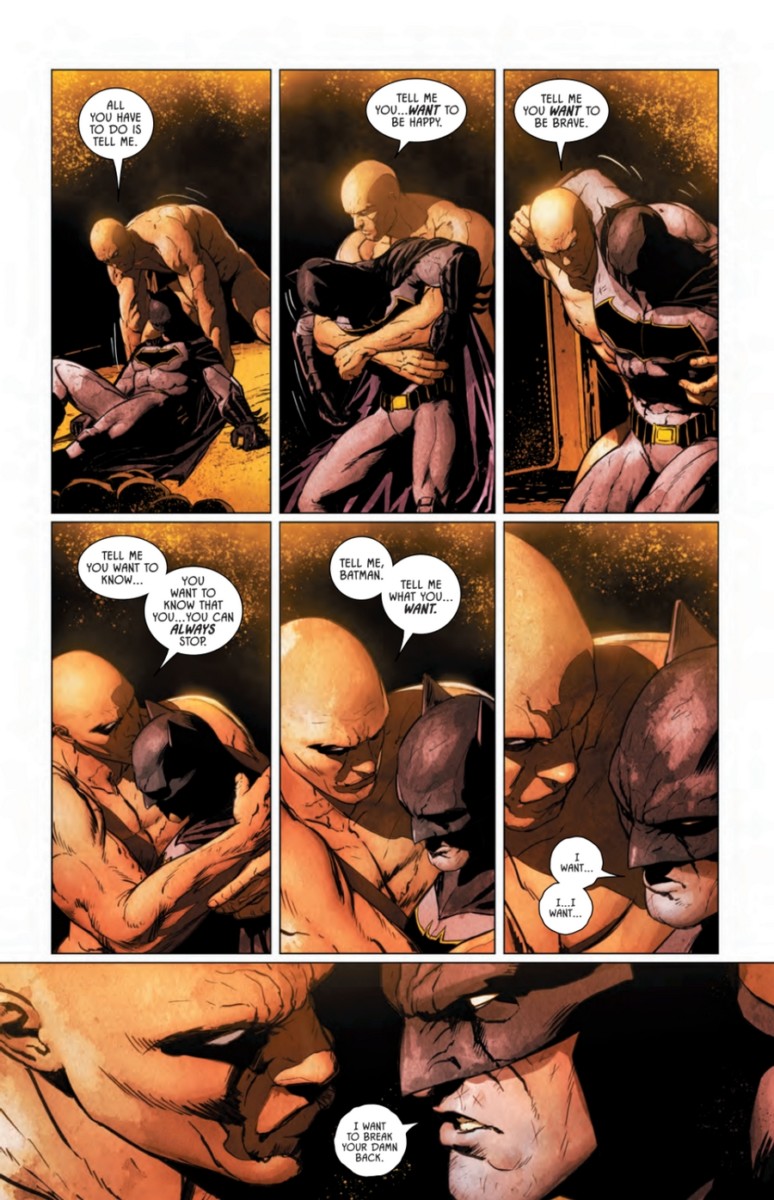 Despite the depth in King’s writing, the issue falls flat as it progresses. It turns out Catwoman’s “betrayal” was all part of the Bat’s plan for her to get close to Bane. This is quite a boring reveal and a wasted opportunity for what could’ve been a deeper exploration of Catwoman’s character and her relationship with Bats. The Cat’s action here also portrays Bane as a weak and unintelligent villain, giving Batman all the leverage. King’s further use of the side characters also makes you question Batman’s plan and if he even needed a full squad in the first place. Excluding Ventriloquist, Bronze Tiger along with Punch and Jewlee failed to serve a bigger purpose for the plot.

For instance, Punch and Jewlee make a raft out of their Bubblicious gum for the whole squad to escape. That’s it. Was there even a need for the duo then? Couldn’t Batman just signal one of his many transports to leave the island instead? That would’ve been way faster. And Bronze Tiger was able escape his prison by purchasing venom from Bane’s henchman (so much for loyalty) and injecting himself with it. It’s hard to believe the same army that was after Batman’s squad would consider helping one of his teammates escape. This feels like lazy writing, as well as making the character of Bronze Tiger appear weak as he succumbs to his vice. King’s use of the Ventriloquist is creatively utilized for the plot, so it’s sad to see the other squad members fail to meet a bigger and more creative purpose.

LISTEN: Our podcast panelists discuss the ways in which sex and sexuality function in comic narratives including CATWOMAN. Meowww!

Where the use of characters falters, the artwork, however, continues to mesmerize. The illustrations of Mikel Janin draw you in as Batman confronts Bane. The art makes you feel the intensity between the two, as Bane delivers continuous blows to Bats. With deep shadows and brilliant expressions, Janin depicts an uncanny atmosphere as characters race against death and time. June Chung’s colors beautifully differentiate settings in pages while keeping characters focused. When the panels shift back to Bane’s lair, the fluorescent yellow lighting lingers as opposed to the gray tone added to the sewers and outskirts of Santa Prisca. The art duo also crafts the most shocking and memorable back-breaking scene in one full page. You feel Bane’s pain as Catwoman leaps to deliver the shattering blow. The scene alone proves why Janin and Chung’s art is the highlight of the series thus far, leaving big shoes to fill as the next issue introduces a new art team.

BATMAN #13 is not the conclusion we wanted in the “I Am Suicide” arc. It’s far from it. King struggles to progress the story creatively, unable to find a purpose for certain characters. Yet, his establishment of in-depth dialogue and the complex nature of the Bat is exceptional. Although the plot isn’t the strongest, the art is the reason you’ll keep flipping through the pages of this issue and overall arc. Batman and his squad are able to do the impossible and stay alive. And when the back finally breaks, we are shocked, we cheer, and we admire.