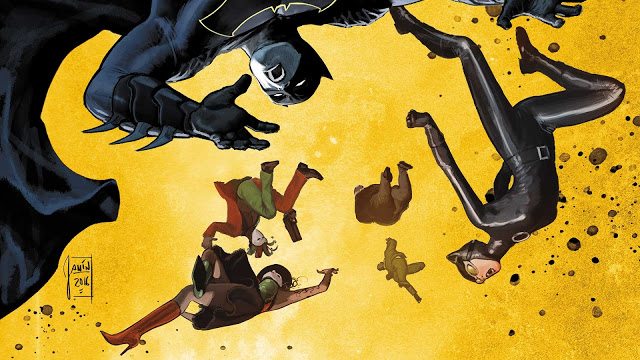 The entire issue of BATMAN #12 is framed by a letter that Batman wrote to Selina Kyle while she was still in Arkham. Pieces of the letter act as narration over Batman’s assault on Santa Prisca, fighting through hordes of Bane’s foot soldiers as he makes his way to the man himself. As Batman enters the depths of Bane’s lair, we enter the depths of Batman’s mind. We learn through his letter that the 10 year old Bruce Wayne never truly survived his parents’ murder. In a shocking dovetail from Batman’s origin, Batman describes to Catwoman how he sat on his knees and took his father’s razor blade to his wrists, preparing to end his own life.

The only thing that stopped him was his awareness that Gotham was frozen in perpetual suicide, just like he was. Gotham stood on a razor’s edge, ready to die, and only Bruce Wayne possessed the power to stand between the city and that razor. As Batman proclaims to Catwoman, and to the reader, “I Am Suicide,” we finally understand that Batman fights through his pain, and he uses it, because he’s always in pain. He doesn’t fear death, because he is death. Bruce Wayne died a long time ago, and only as living death can Batman stop the same fate from befalling the innocents of Gotham.

King’s penchant for underlining his stories with riveting, psychological drama is on overdrive in this issue. Batman’s descent into Bane’s world could have easily been a solid, entertaining comic in its own right. But instead, every punch to Bane’s foot soldiers surges with meaning. The force of perpetual agony fuels every punch, every kick. As he tells his story to Catwoman, he viscerally unloads his torment on the soldiers with full force.

READ: Catch up on the events that led to Batman’s assault on Bane with our review of BATMAN #11!

Batman is on the brink, and seeks to rescue Catwoman from the same precipice. Last issue, we watched as Catwoman tore open the throats of several of her allies. A shocking move for her, but less shocking than the revelation that she murdered 237 people.

The origins and circumstances surrounding these murders have yet to be revealed, though they apparently had something to do with an orphanage. My guess is that a group of people murdered orphan children, and Catwoman, being an orphan herself, sought bloody revenge. Perhaps she went too far, and murdered many more than intended. Batman’s letter makes it clear that he sees Catwoman as a kindred spirit. Hence them referring to each other as “Bat” and “Cat.” Coming up against death, Batman brought himself back. But Catwoman utilizes death in a different way. Whereas Batman defends Gotham’s people against death, Catwoman uses death to empower her, to inflict vengeance upon others. Batman knows intimately the kind of pain that drives her, and he believes he’s the only one who can stop her. And save her from herself. As Batman mows his way through Bane’s men on his way to the Cat, we feel Batman’s urgency and desperation in every devastating blow.

The artwork by Mikel Janin enhances these blows, lending weight to each punch. Several full-page spreads show the scale of Batman’s attack in detail, depicting Batman in imposing might, as he traverses the murky terrain of the sewers, or ascends the mighty towers of Santa Prisca. Each of these environments is beautifully rendered, with the blues of a sewer stream giving way to yellowish lighting within the tepid caves. The yellow warms to orange as Batman descends further and further, before finally turning into a hellish red as he emerges into Bane’s throne room for his last stand.

King’s story admirably forges a re-telling of Batman’s psychological origins. Not of his parents’ murders, but the moments that follow. Depicting a 10-year-old Bruce on the edge of suicide is an unexpected choice, and I can imagine the kind of reader that would find this choice disturbing. But the consideration of suicide doesn’t make Batman a weaker character. If anything, it makes him stronger for facing the choice of death and, instead of giving in, using it to press forward. Instead of doing away with his own life, he dedicated it to saving the lives of others. This revelation forces the reader to consider Batman in a whole new light. By facing death and choosing to oppose it, Batman has truly earned his place as Gotham’s savior. After 75 years and multiple re-imaginings through a handful of master writers – including Frank Miller, Alan Moore, Grant Morrison, and Scott Snyder – it’s amazing how the depths of Batman’s psychology are still being explored and redefined.

As Batman moves to confront both Bane and Catwoman, he lands on his knees, ready to confront death once again. Not for himself this time, but for Catwoman. The two are kindred spirits, perpetual vessels of suicide incarnate. They constantly exist in the purgatory between living and dying. Batman has chosen to resist death, but Catwoman has yet to make that choice. Now the time has come. As they circle each other, preparing to strike one final time, King suggests that this is the last stand for Batman and Catwoman. Physically, Batman makes his last stand against Bane, but emotionally and psychologically, it’s all about Catwoman. Together, the Bat and the Cat will either fight death… or finally succumb. We’ll see how it all ends next issue.