BATMAN #11 is back in form after the strange back breaking rant from the previous issue. You’re definitely in for a ride!

While the previous issue’s strength was the letter from Selina to Bruce, which conveyed the similarities and differences of both characters, it also put an emphasis on Selina’s past and her act of killing a high number of men she deemed guilty. Writer Tom King explores the character of Catwoman in BATMAN #11 once again as she strays away from Batman’s plan to capture Psycho Pirate from the hands of Bane. 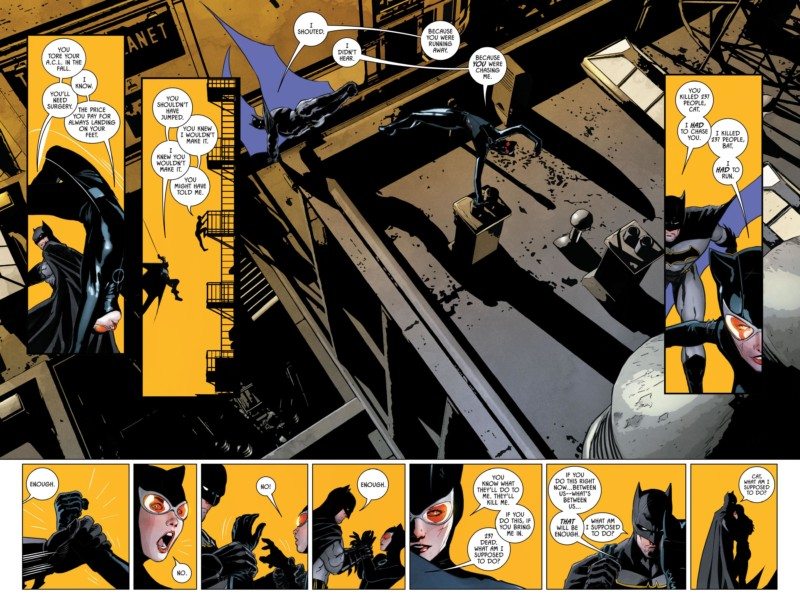 READ: Find out thoughts on the previous issue with our review of BATMAN #10!

To recap, Batman’s little suicide squad includes the Ventriloquist (without his puppet Scarface), Bronze Tiger, the obnoxious duo of Punch and Jewelee, and Catwoman. In this issue, we get a glimpse of each squad member and how they partake in Bat’s plan, but the Ventriloquist is still a basket case. It remains to be seen what the Bat has planned for the has-been villain in this rescue mission, since he posses no physical strengths or capabilities like the other members, he’s only a victim of an identity disorder. The mystery behind the use of the Ventriloquist is another key plot to keep you invested in Batman’s mission. The Cat also shares a beautifully articulated page with the Ventriloquist, as the two dive deep into the bowels of Bane’s fortress. Catwoman questions the Ventriloquist’s need of his “monster,” the puppet Scarface, how the Ventriloquist feels secured when the puppet is not in control. She conveys that her own “monster” has her by the claws and just wouldn’t let go. Batman believes if Selina helps him with the mission, then she can avoid the straps and needle, but Selina knows that her past action can’t be undone. This revelation leads to the fall of Batman’s plan as Catwoman attacks her squad and confronts Bane, making her demands in exchange for the Bat’s demise.

Catwoman’s betrayal, which feels a bit predictable and tiring by now, is still an entertaining reveal. Selina’s selfish personality and motive to escape her own prison and death are on full display here. With so much focus on Catwoman, it will be interesting to read how the dynamic between the Cat and Bat will change after this issue. Maybe the Cat will play in a bigger part of Batman’s plan or perhaps he predicted Catwoman’s scheme and is going along with it? We can only hope the arc will wrap up in a satisfying battle to come, putting the spotlight back on Batman and Bane, since the talk of breaking backs of both characters continues to echo forward. 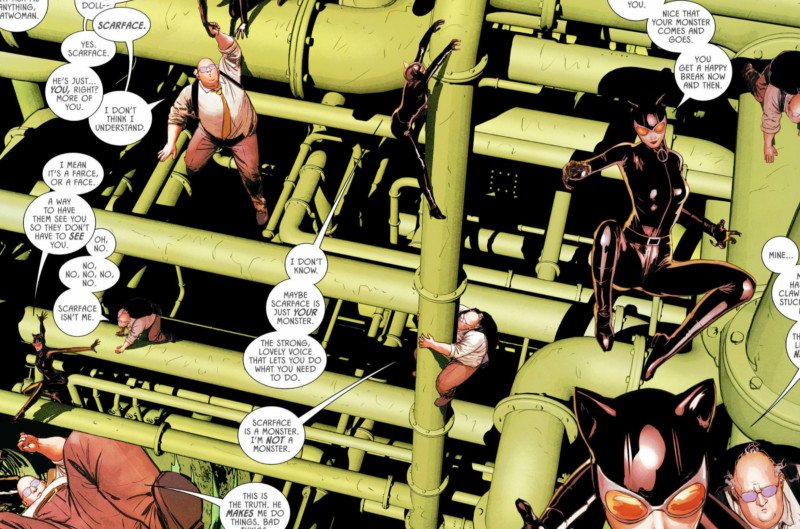 June Chung’s colors again enhance the story while Mikel Janin’s pencils capture the essence of each character with motion and clarity. A chase sequence at the beginning of the issue highlights pain and intimacy, with how the characters move away and against each other at the break of dawn. The page is a strong reminder of why we’ll never get tired of seeing the never-ending rooftop chases between the Bat and Cat. Another notable piece from the art team of this issue, mentioned earlier, is the interchange between Catwoman and Ventriloquist in the sewer pipes. Janin and Chung masterfully portray this scene with maze-like pipelines in the background and color popping mini-sequences taking over the entire page.

If you weren’t satisfied with the previous issue, then have no fear. BATMAN #11 will continue to captivate you with its creative art and strong focus on Catwoman. Batman’s plan falls apart when the Cat leaves a trail of (squad) blood and holds the attention of Bane to herself. So keep on reading to find out more on the latest Bat shattering epic.