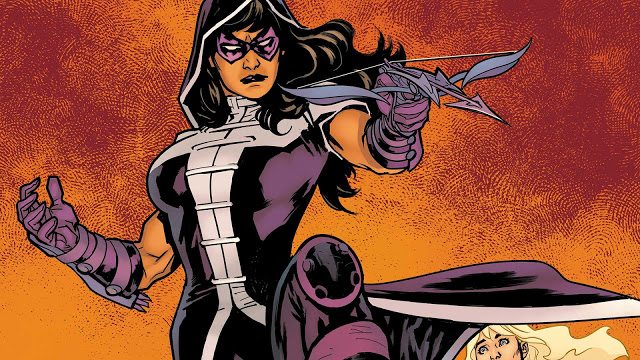 BATGIRL AND THE BIRDS OF PREY has been a roller coaster ride, thriving primarily on the boisterous love-hate relationship between the three leads, Batgirl, Black Canary and Huntress. Their distinctive personalities and feisty spirits have led the way for fun interactions, often at each other’s expense, but they always help each other in service of their mission to track down the mysterious new Oracle, who’s usurped the mantle previously held by Barbara Gordon. In BATGIRL AND THE BIRDS OF PREY #5, there was a big revelation about Oracle’s identity. The new Oracle was *drumroll*… just some dude who’s really into Batgirl. I admit I found this revelation to be a bit of a letdown. But in BATGIRL AND THE BIRDS OF PREY #6, the kid’s introduction proves to be a fun ingredient, as the BoP and their new “Oracle” track down the mysterious Fenice and her gang of snake-themed henchman.

The bigger revelation last issue turned out to be that Fenice was actually Huntress’ long lost mother. It was a smartly hidden twist, given that last issue was devoted to the less-than-impactful Oracle twist. But the Fenice twist packed an emotional punch. That emotion carries over here to the mother-daughter reunion, as we learn about Fenice Bertinelli’s backstory, and the tragic events that led to her family’s murder by the Cassamentos, another crime family. This story gives the villains some much needed dramatic weight. The villains in this storyline have been the weakest element. Other than Fenice, the villains have lacked personalities. The Cassamento and Bertinelli crime families just seemed like generic Mafioso types, and the snake henchmen came off like increasingly dull gimmicks. The most interesting villain was the new Oracle, who isn’t really a villain anymore. So without a real threat, the Fenice revelation creates some much needed investment in our big bad, even if it’s coming a little too late in the arc.

READ: To find out what’s going on in this series’ sister comic, read our review of BATGIRL #6!

As ever, the real fun of BATGIRL AND THE BIRDS OF PREY #6 is its sense of humor and good fun. With the spirited banter between the three leads, it’s clear that they’re having a good time, even in moments of danger. They have an endearing kinship that gives momentum to the story through even the duller plot moments. Huntress gets the most development of the three, with her emotional reunion with her mother anchoring the story. Batgirl too has a nice resolution, coming to terms with her various identities and accepting the new Oracle. Black Canary has had the least development this arc, but she’s the funniest member of the group, with her penchant for delivering snarky lines like “dibs on the aisle seat,” in a theater full of snake henchmen. Canary always helps to bring the action back down to Earth.

The Birds of Prey have had the distinction of being the only all-female team in DC, which has helped to keeps things fresh. It looks like things are changing now, with the new male Oracle seemingly joining the team for a while. But I think this could be an interesting monkey wrench thrown into the dynamic. The new Oracle will have a subordinate role, and his enthusiasm about working for three strong women is a refreshing change of pace for comics, subverting traditional male/female roles. It’s definitely an appropriate turn in this female-driven series.

The artwork by Roge Antonio is solid, as expected. His rough character designs are appropriate given the quirky qualities of the BoP world. The odd and disproportionate ways he draws the character’s figures are still tough to get used to, but again, they somehow fit with the humor and oddities of the storytelling. Worth noting however is one particularly glaring error on the second to last page, in which Batgirl, shown from the back, is talking to Oracle, but she’s drawn with Black Canary’s blonde hair and leather jacket. I’m not sure how this got past the editors, but it’s a pretty amusing goof.

READ: The search for the mysterious new Oracle began in BATGIRL AND BIRDS OF PREY #1, which we reviewed here!

Admittedly the “Who Is Oracle” storyline has dragged in the past couple issues, but it comes to an emotional and well-rounded conclusion here. Each character is given their moment to shine, particularly Huntress, who had the most notable and conclusive arc out of our three main heroines. The series is not without its flaws, but the hilarious interactions and wonderful characterization of BATGIRL AND THE BIRDS OF PREY are well worth reading, and definitely worth coming back for more next month.