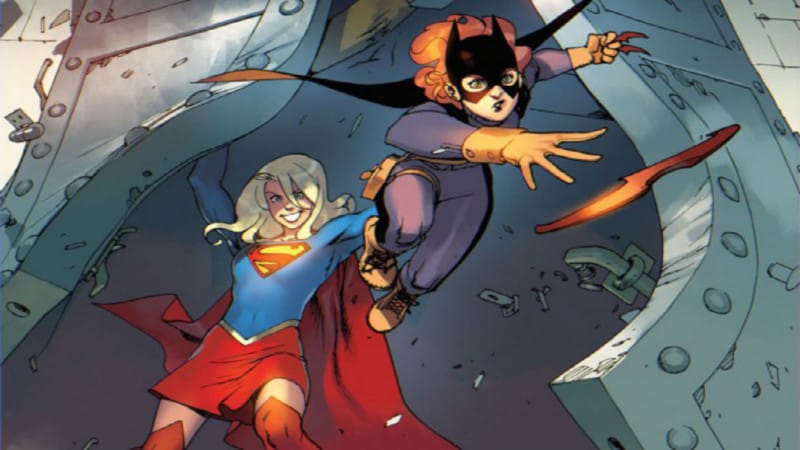 It’s all about team-ups in BATGIRL ANNUAL #1 as Barbara Gordon finally meets Supergirl. Barbara finds herself lending support to Kara while in National City, but it’s not all fun and games in their meeting since Supergirl needs help in freeing a potential Kryptonian.

The beginning half of this annual focuses on this specific DC team-up as the two infiltrate a Cadmus lab. Writer Hope Larson gives us some pretty great banter between the two young heroines. Their journey into Cadmus, of course, comes at a risk of ruining Kara’s reputation in National City. The possible safety of another Kryptonian appears to be more valuable, though.

READ: Missed out on the latest issue of BATGIRL? Check out our review of BATGIRL #9!

Larson’s writing is witty and quite comparable to the early stages of a developing friendship. Both girls have questions that could come off as rude or insensitive, but it’s expected when you know so little about the alien sitting beside you. She also does a good job emulating the speech of teenagers who are clearly up to no good. Larson is not afraid to write these characters as flawed or imperfect heroines because that’s exactly what they are. They may be heroines but they’re still capable of making mistakes. 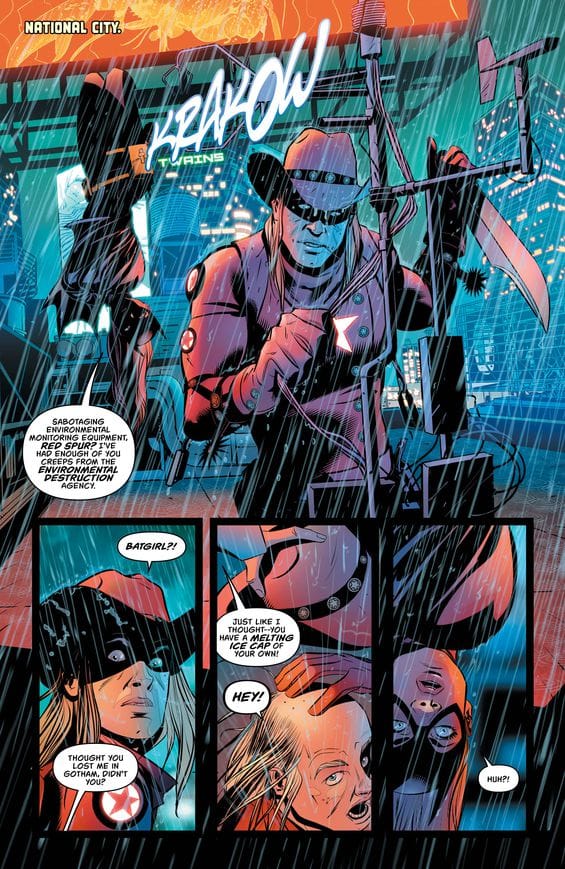 The art for this half of the issue is done by CATWOMAN artist Inaki Miranda. He illustrates the teenage awkwardness of crime fighting for us beautifully. You could easily see the layers in Kara’s cape as well as the depth in her face when she believes something has gone wrong. Each panel has levels that fluidly keep the story in motion.

There’s a fantastic transition in the story that keeps the issue light at heart. While the two are breaking into Cadmus, they argue about whether Barbara messed up in hacking the security system. As they argue, the focus shifts to two people listening in on a lower level. It at first seems like a tense moment, where we believe the two are figured out, but instead, it becomes a little gag on how out of sync the two are so far. It’s great not only for their team chemistry, but it’s also hilarious to see how their mission plays out. Combine Larson’s clever writing with the perfect illustrations of Miranda and it makes for a good run at a BATGIRL/SUPERGIRL crossover. 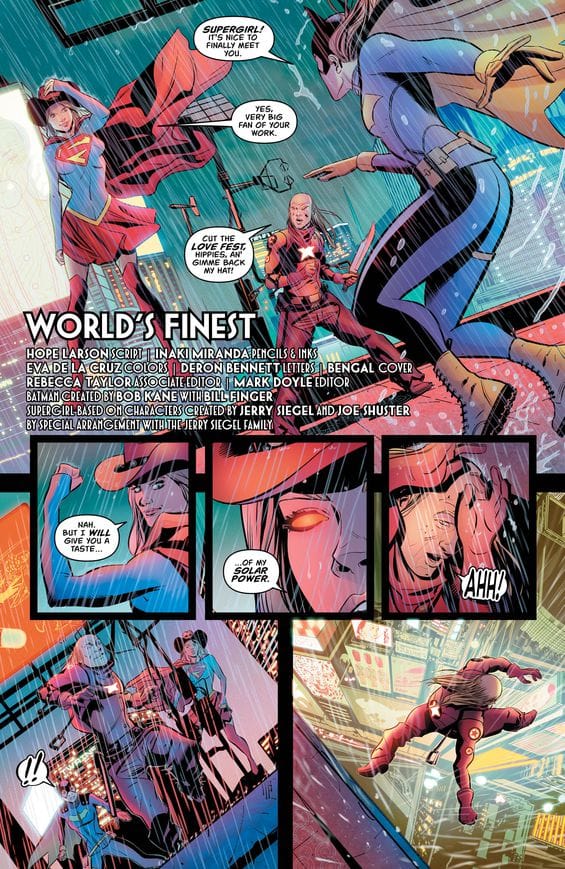 The “Prison Break” story is just the beginning of this annual and not the only team-up we see. The second half of the issue is a story written by Vita Ayala and drawn by Eleonora Carlini. This part focuses on Barbara’s failure to separate her crime fighting from her personal relationships. Her best friend Alysia has repeatedly tried to hold a friendship anniversary dinner. Obviously, Barbara struggles to commit to this plan because of her full-time gig as a superheroine. When their schedules seem to line up perfectly, for once, she agrees to go out for dinner, but plans get ruined when you’re too busy saving the day.

So in this issue, we are given a dilemma-ridden Batgirl who can’t seem to find the balance of saving lives and having one. Ayala takes us on this conflicted night as Barbara tries to work while being out with her friend. Her writing offers fans another fun, but unconventional, team-up for Batgirl. Here she’s forced to be herself, though. Instead of Batgirl joining the fight, she must do it as Barbara. It’s a great concept because it’s so rare for us to see heroines and heroes fighting outside of their suits. 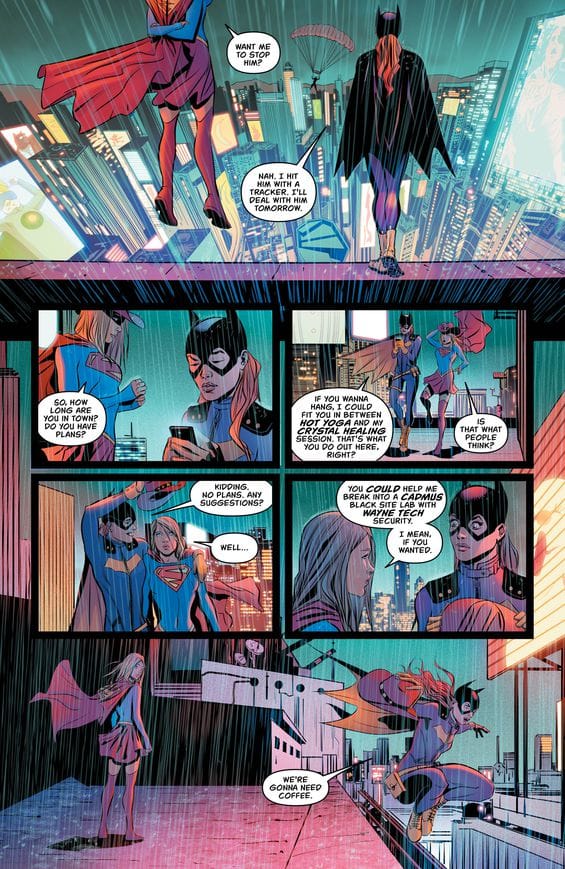 The villain in this part of this issue is Riot Black, who’s back to wreak some havoc again. This character’s use of slang is perfect in this story and the fact that he looks like a trap lord also helps. Ayala writes him perfectly, offering very creepy and deranged sets of dialogue between him and the two girls. It works though because it makes the ending of the story so much more rewarding.

READ: Interested in more BATGIRL? Check out this interview with BATGIRL AND THE BIRDS OF PREY writers Julie and Shawna Benson!

Carlini’s art separates this story from “Prison Break” very well. “Rain Check” has a style more fitting for the random hijinks it leads us on. After all, this is a tale about Batgirl trying to find a way to hide from her friend and suit up. It’s complicated but funny so, of course, it needs a look that fits well. I’ll argue any day that Carlini succeeded in finding a look that not only makes the tone lighter but also carries the plot gracefully. 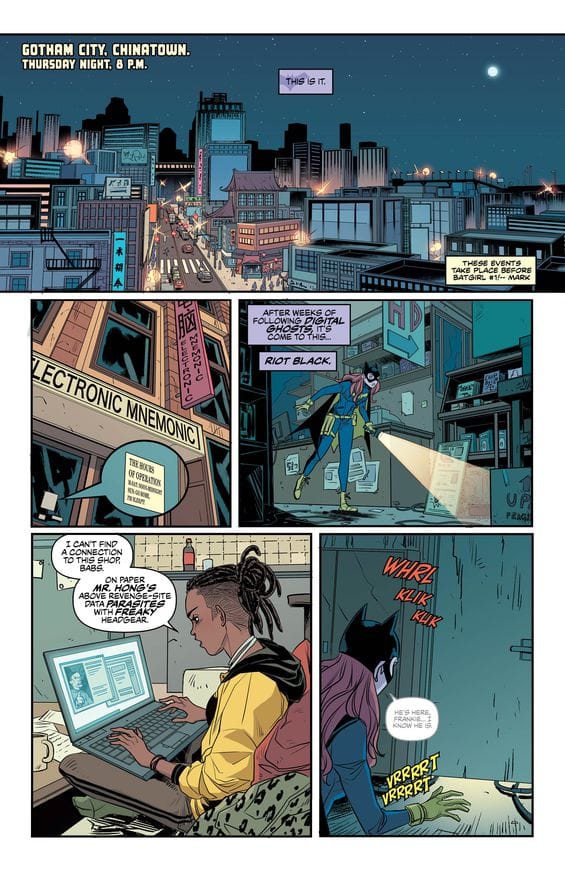 Ultimately, both stories give us a look into what it’s like for Barbara to manage her everyday life as a crimefighter. Sometimes she finds herself in new cities helping strangers with a common goal. Other times she struggles to make time for her besties because of her crime fighting. If there’s one thing to note, it’s that it’s not always easy to find a balance between work and a social life.